The next modification on my plate was an upgrade to the stock ignition system. The stock coils and stock harness have a tendency to cook underneath their cover, particularly after 30 years of use, which can cause misfires and rough running at higher RPMs. I had noticed this, and while some of that could be attributed to the timing issue that ZCG identified and corrected, I figured it was worth an upgrade anyway. There are a few different options for the RB26 - some developed for this application specifically, others retrofitted from other vehicles (Audi R8, GM LS series, Nissan R35 being the most popular options in that category). 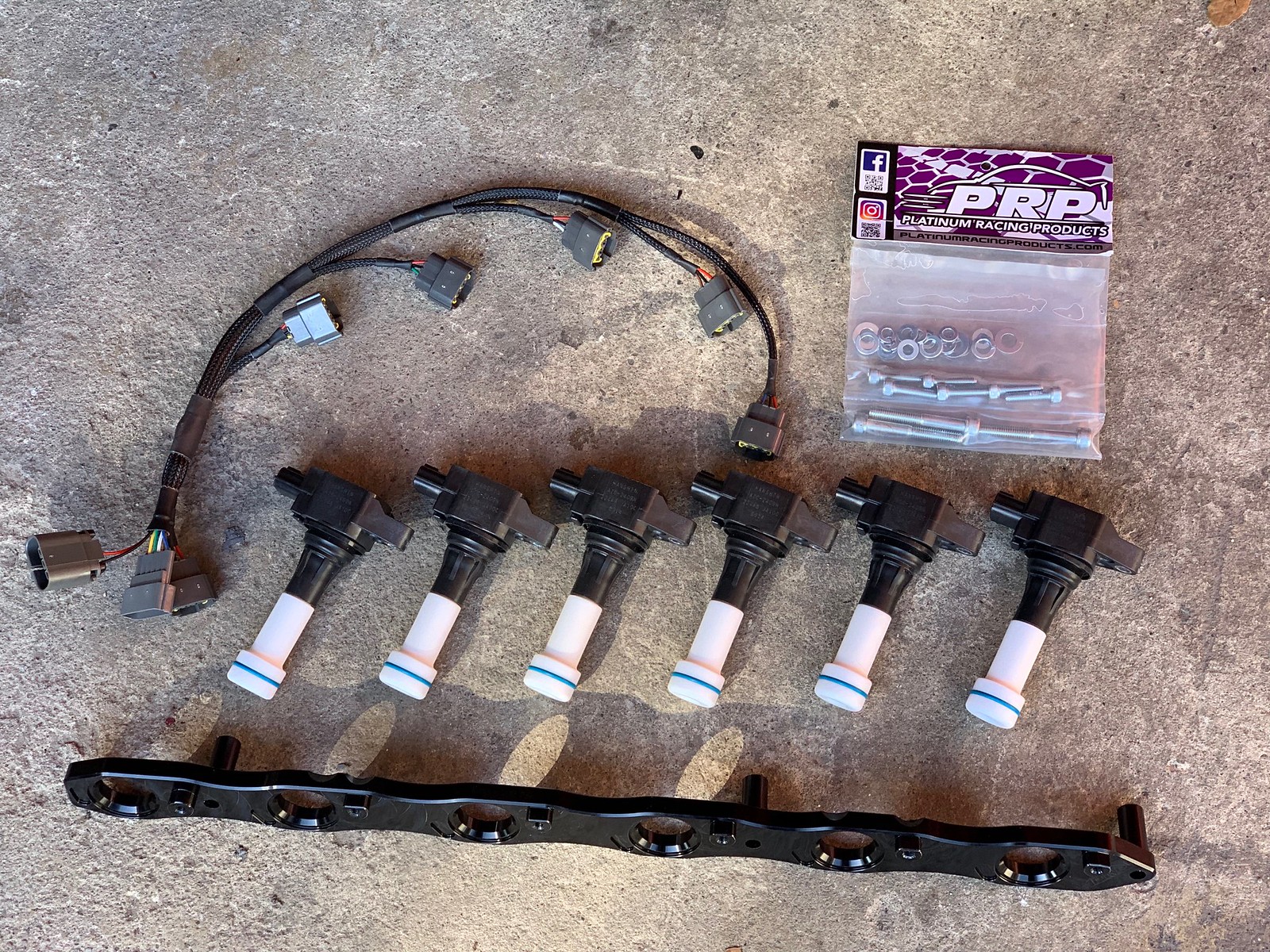 I selected the Platinum Racing Products kit, which uses the factory R35 coils, largely because their complete kit fits under the factory cover and requires no modifications and really no compromises. They've also done a great service to the RB26 community with testing and research. Here are some useful links on the topic: 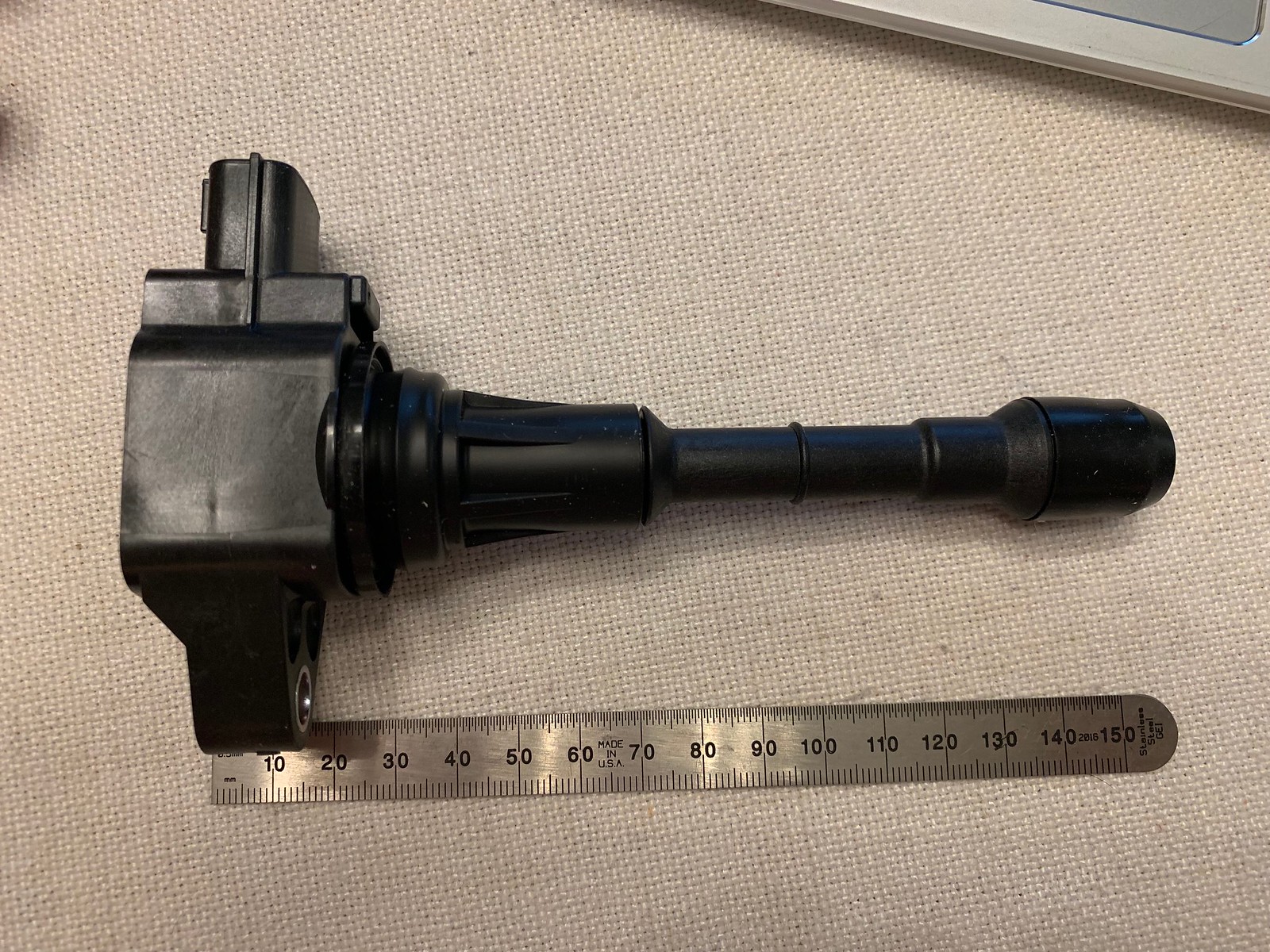 Installation requires a little modification to the factory R35 coils, so I wanted to include some detail on the installation process for curious minds. The R35 coil just pulls apart with a bit of twisting. 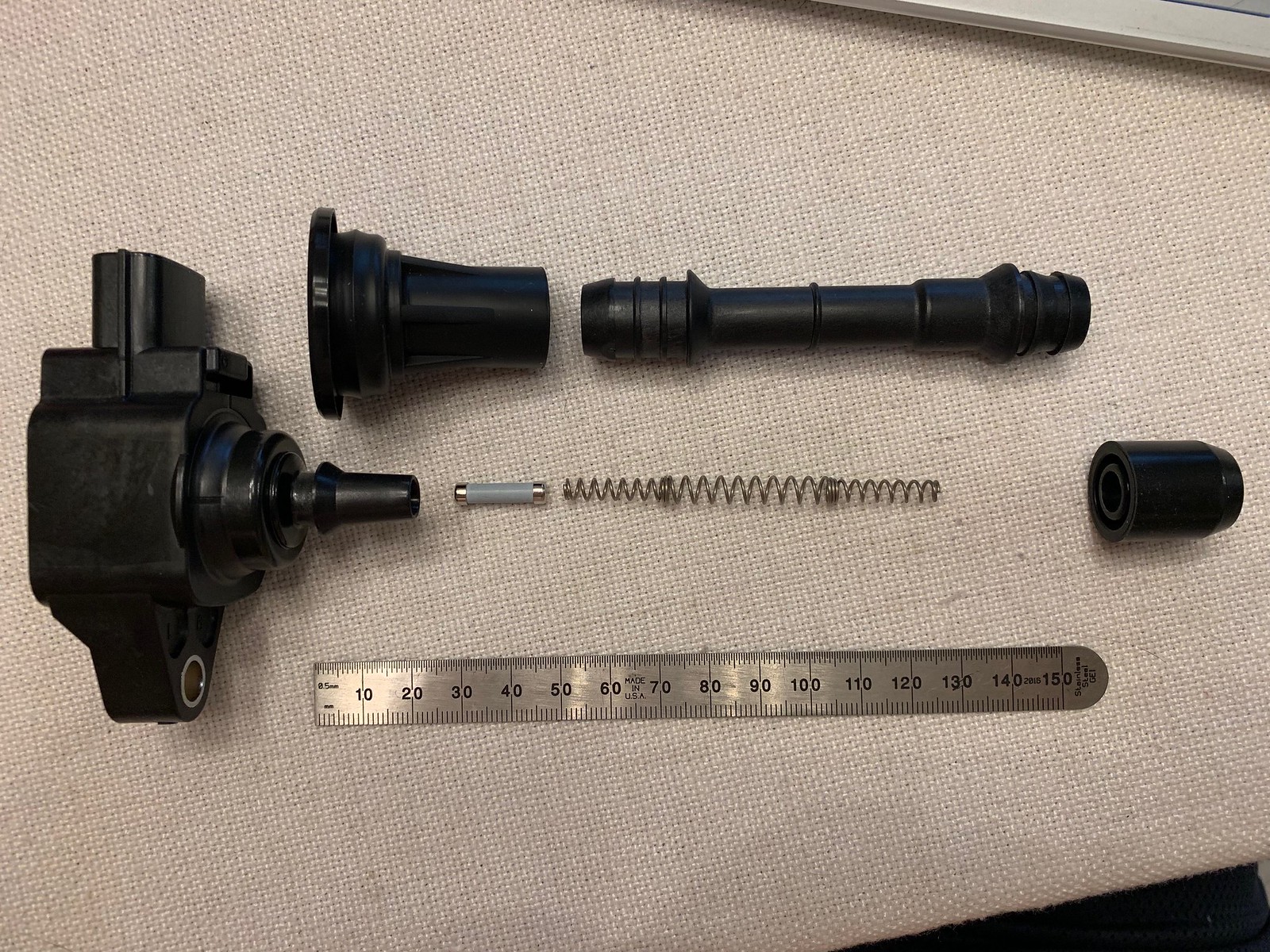 Disassembled R35 coil. The spring needs to be trimmed down ~5mm for the new, shorter stalk. 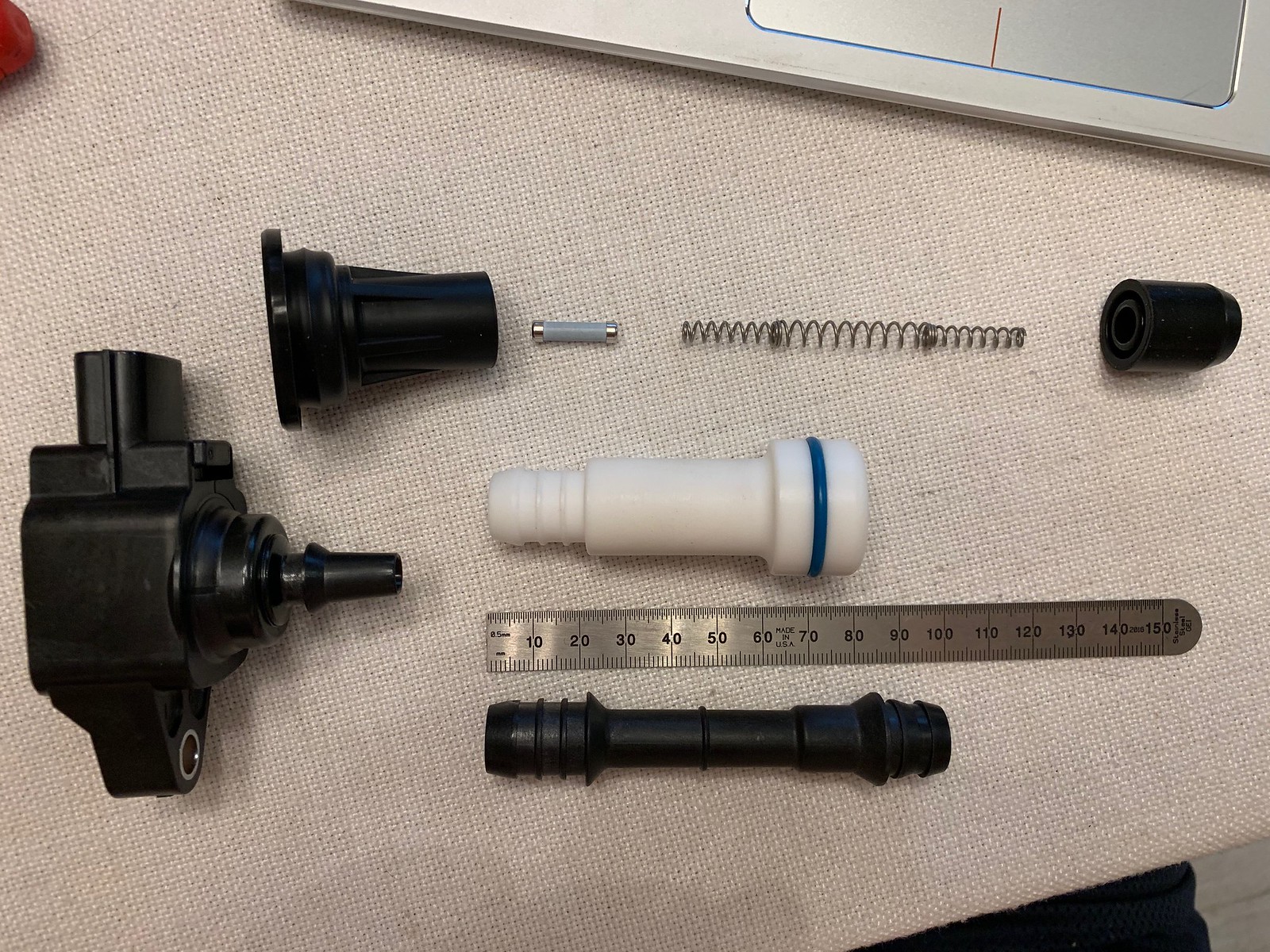 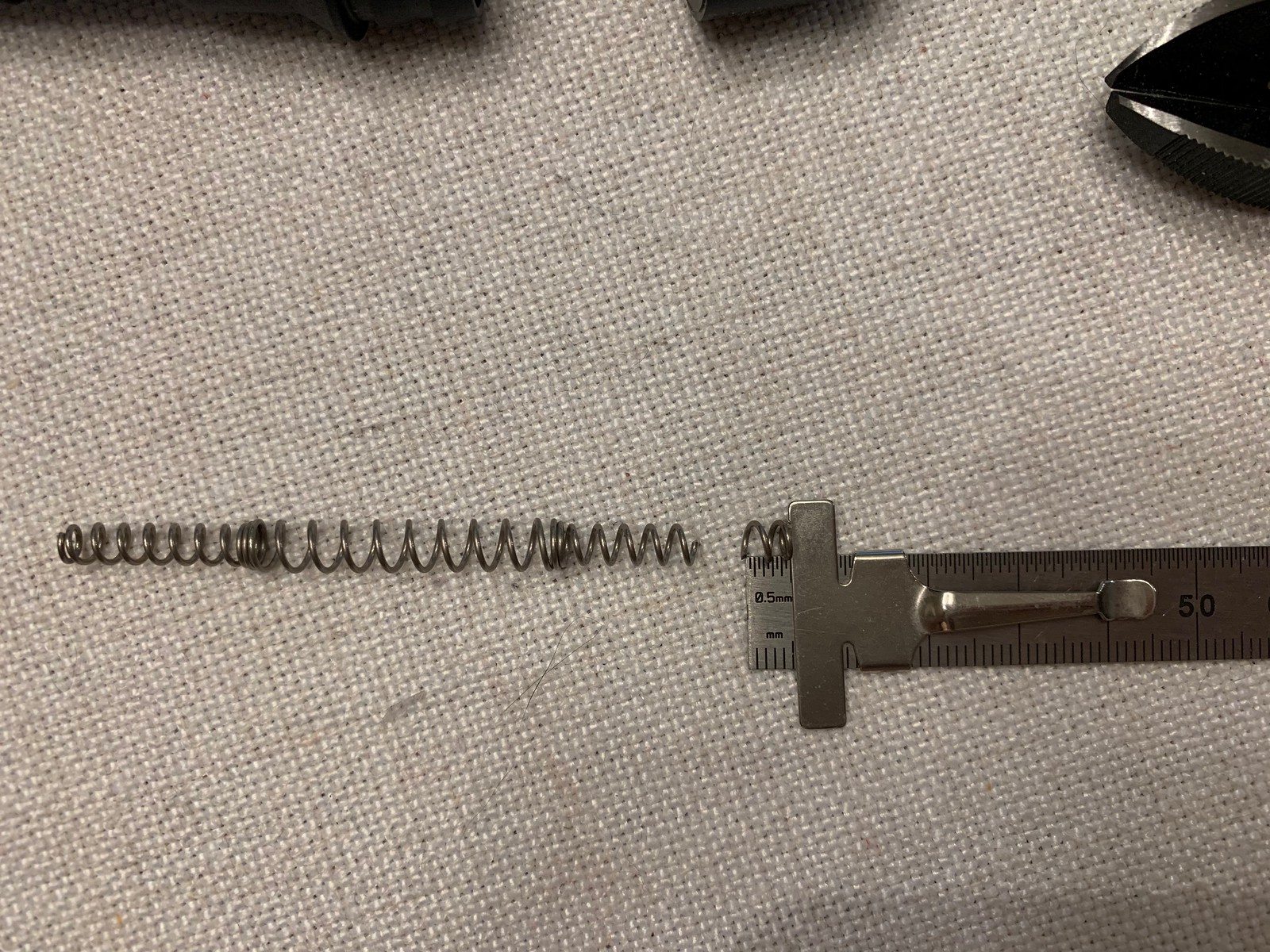 You will need to trim 5mm from the original spring for RB26 fitment. You will notice that the spring is symmetric, with a larger diameter portion in the middle. You want the trimmed end to point toward the coil end, not the spark plug end. 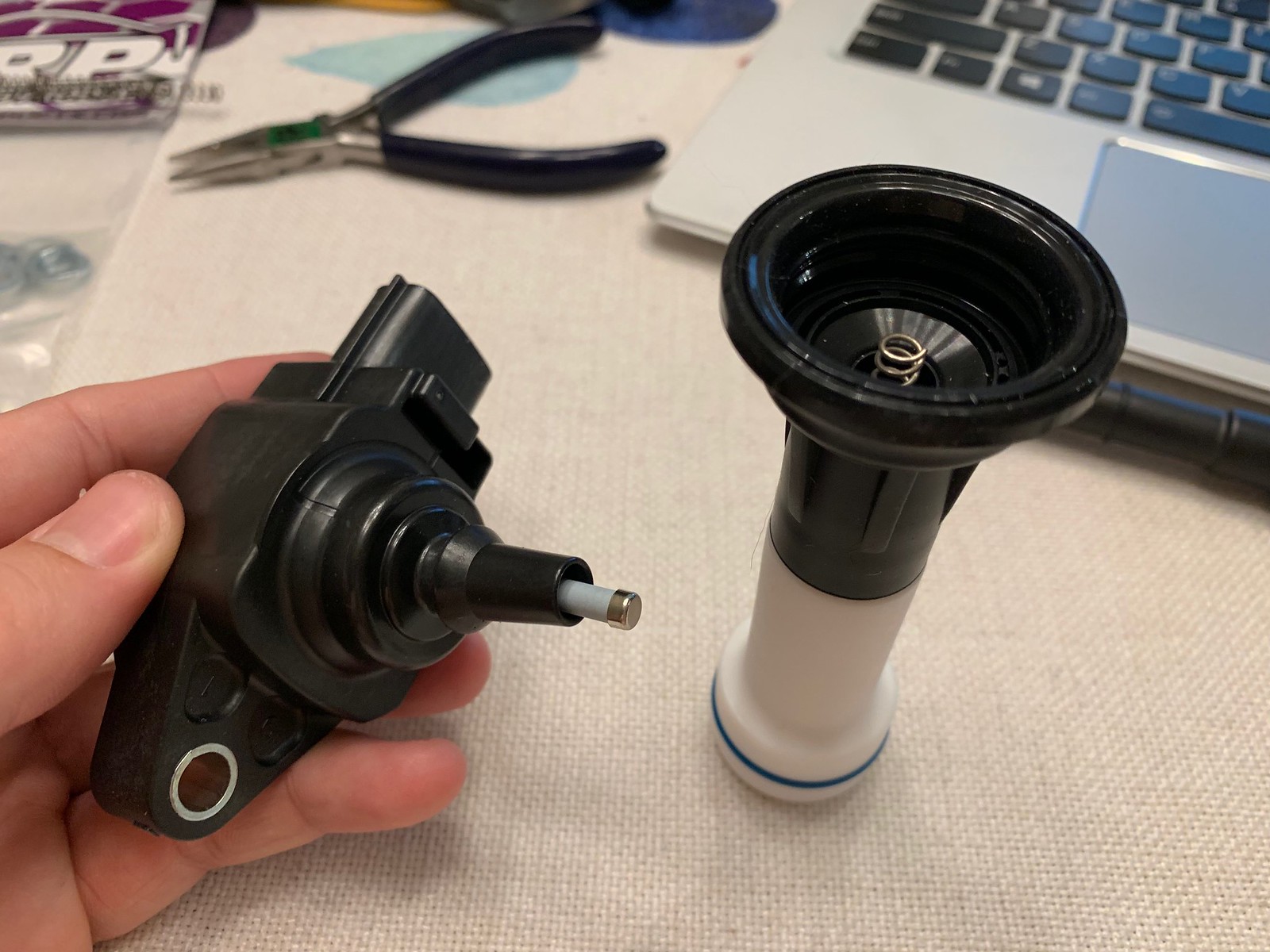 Ready for reassembly. Trimmed end of spring visible, ready to fit up against the resistor. 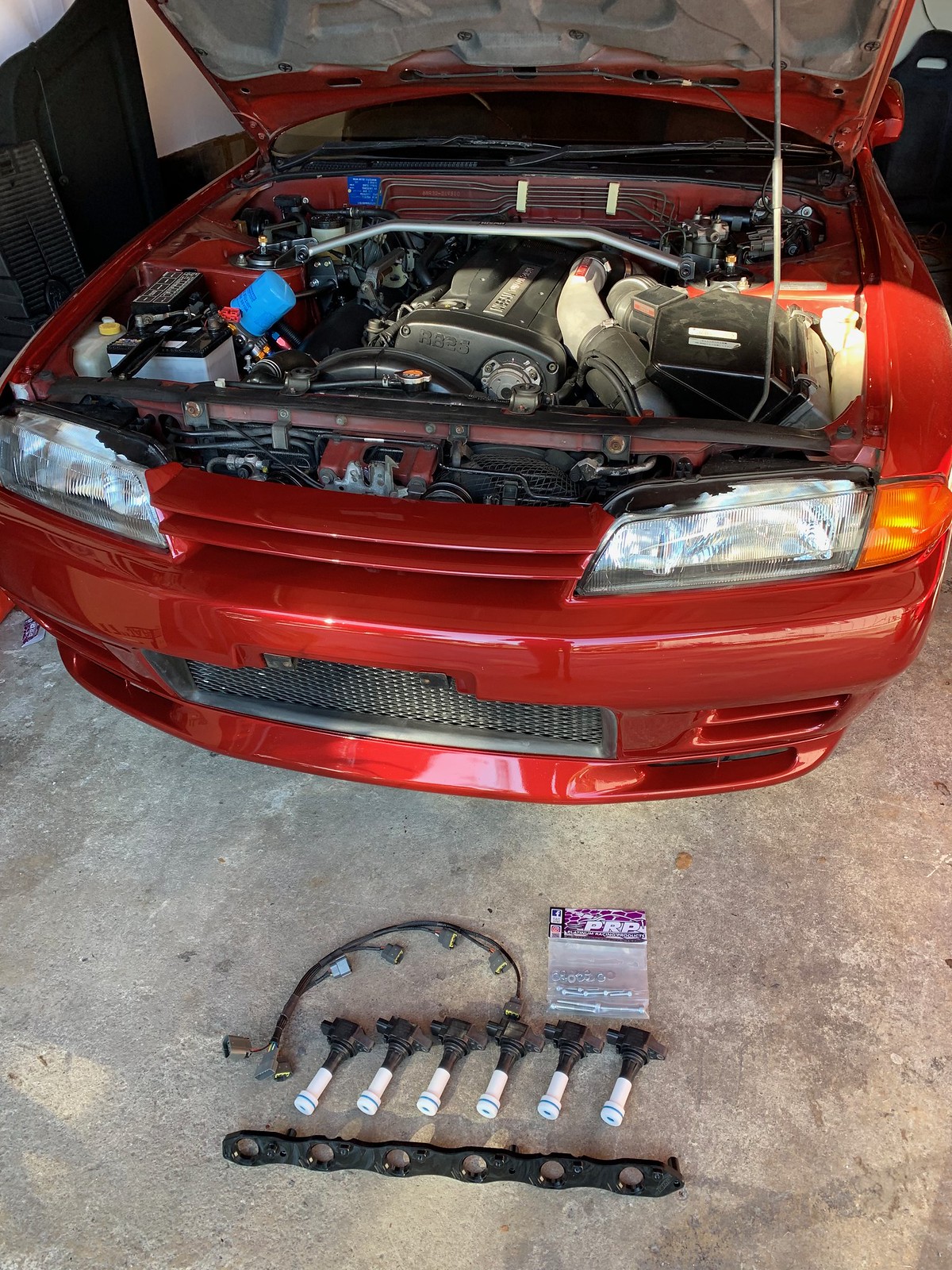 Installation was straightforward. A hard copy of instructions was not included, but there's not much to figure out. Disconnect the harness, unbolt the stock cover and igniter, and thread it all out so that the cover comes free. 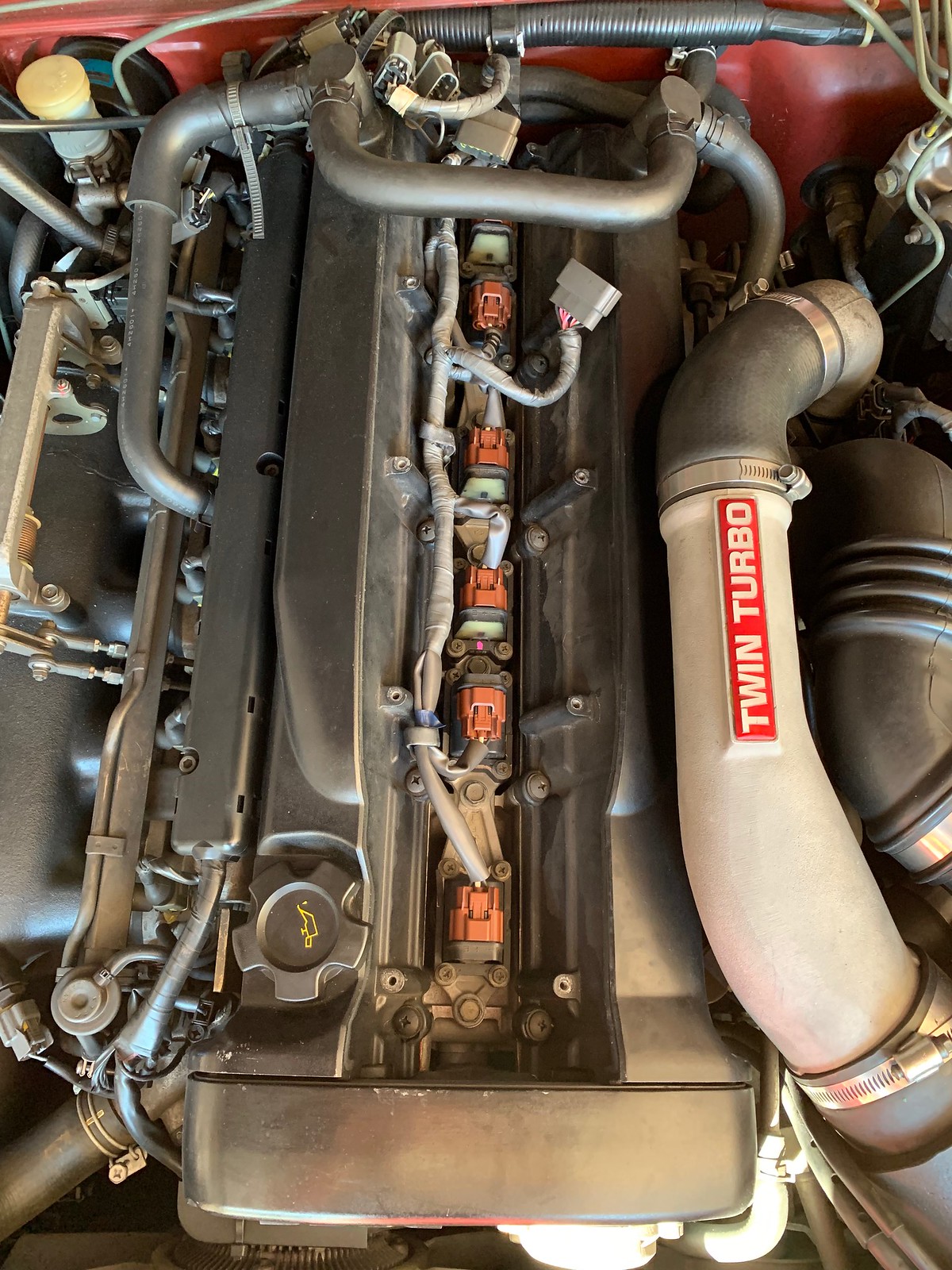 Unplug the harness and release it from the bend-over retainers. Unbolt the brackets carrying the stock coils and pull them out. 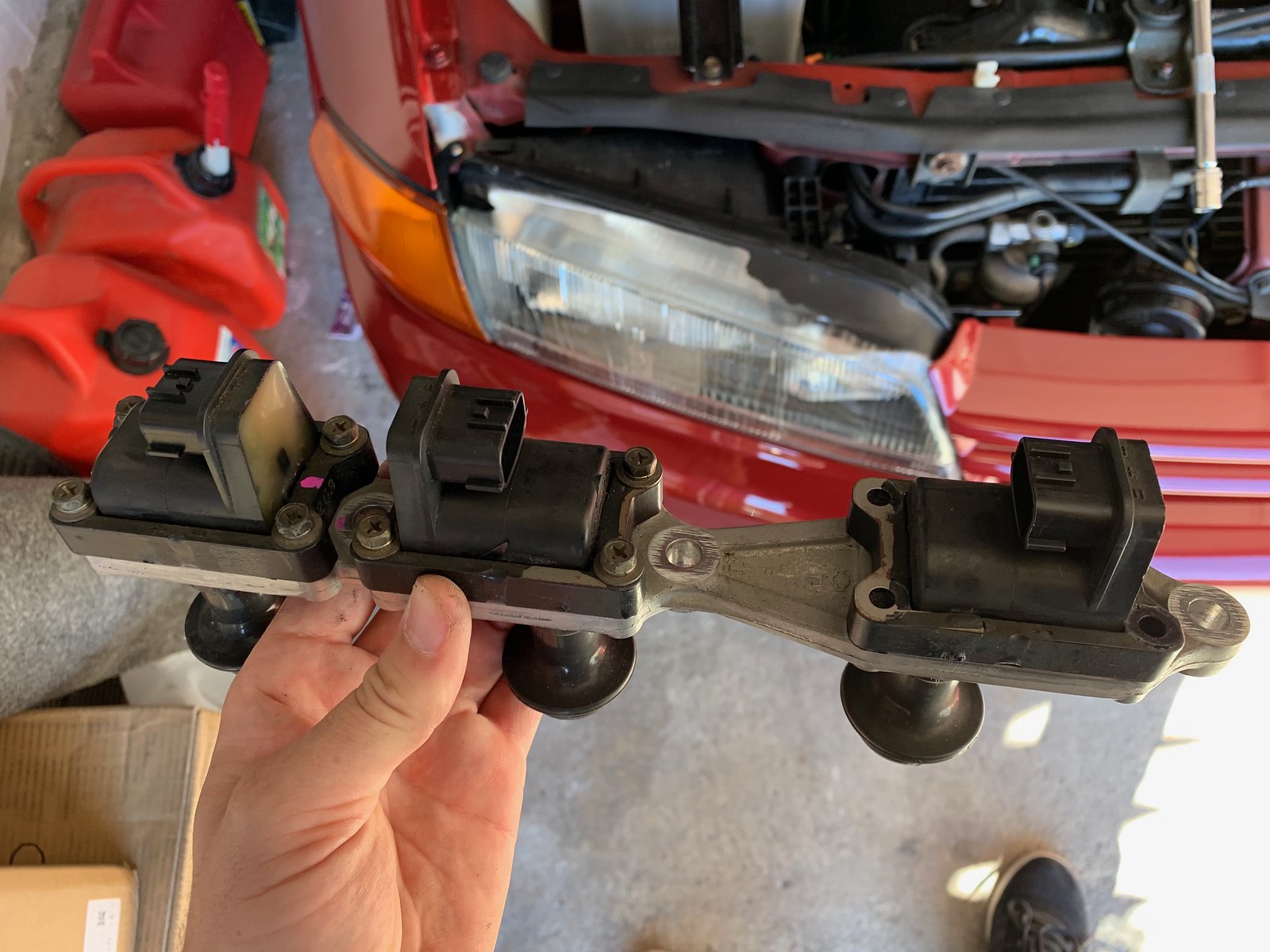 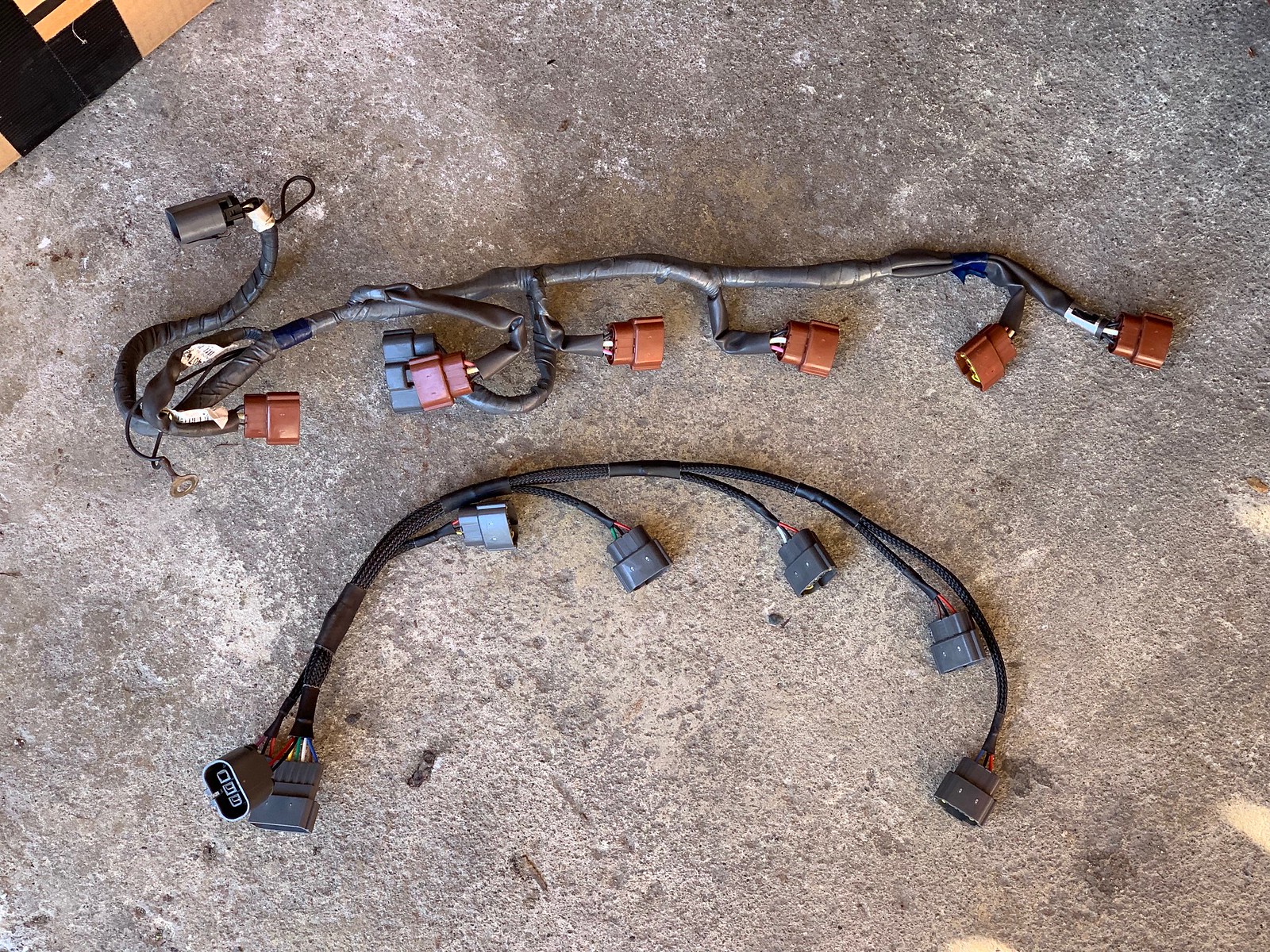 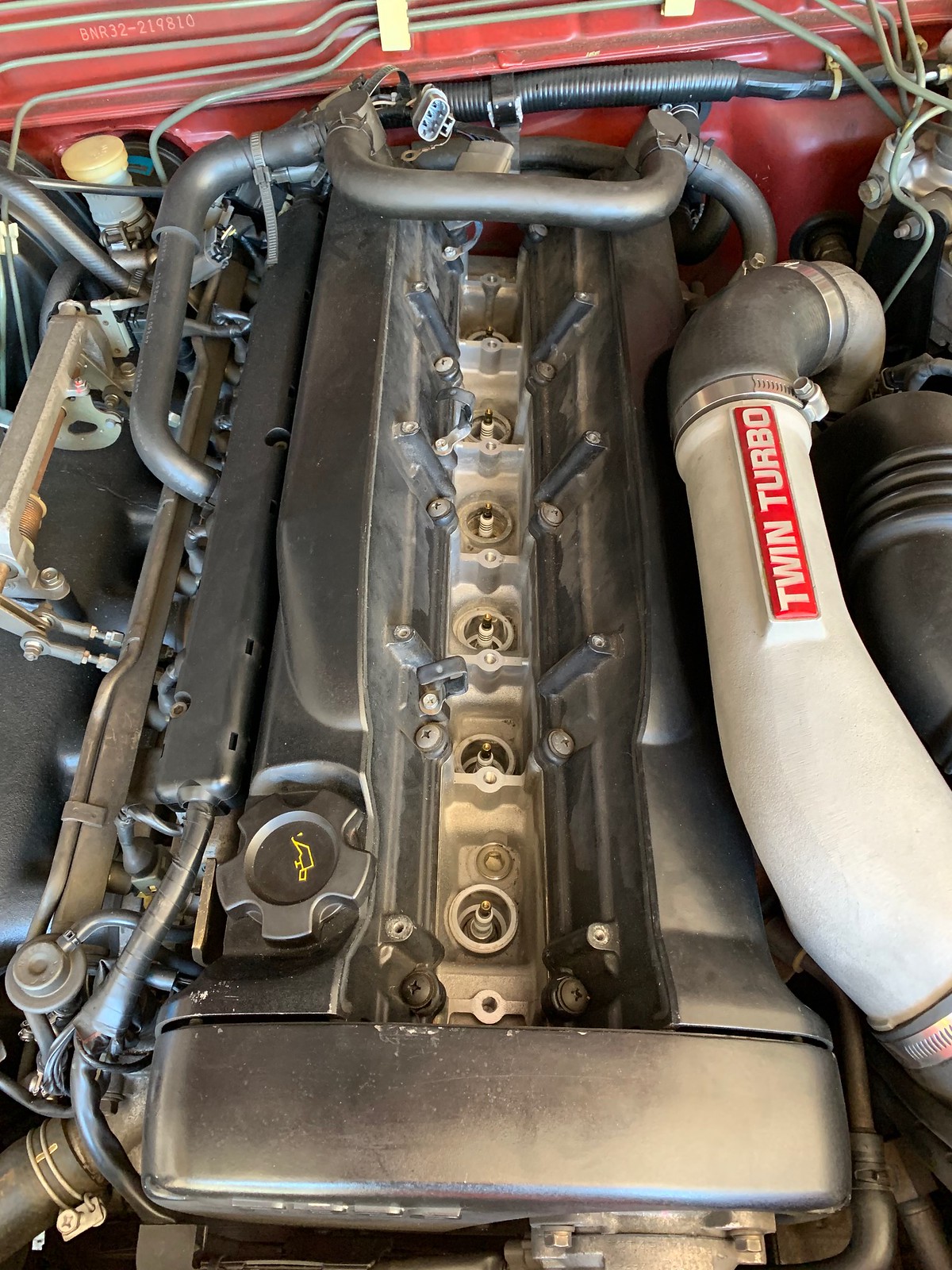 This is a good time to inspect the condition of your plugs and check that they're gapped correctly. Bolt in the PRP machined bracket. Coils go next, then harness. 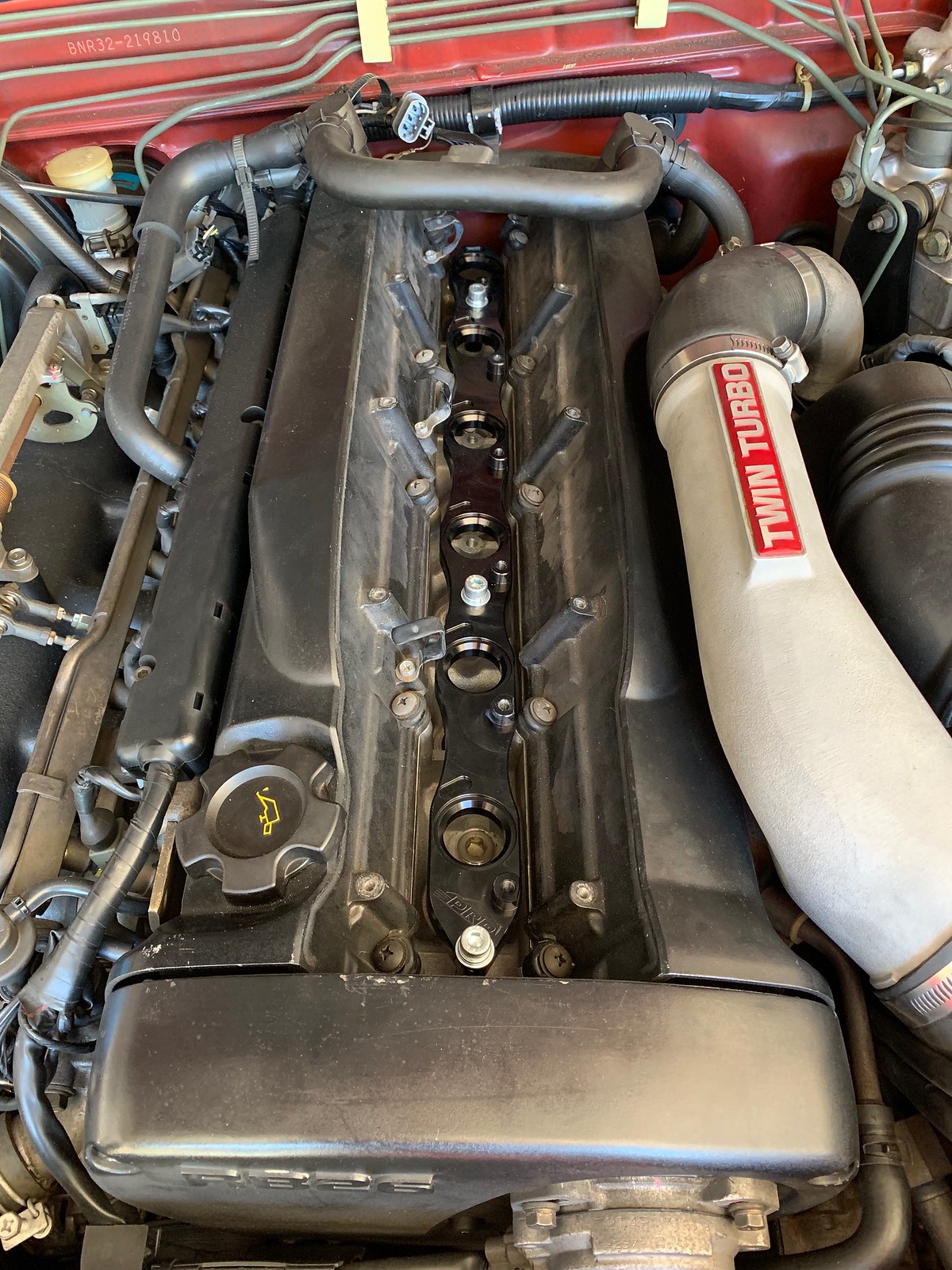 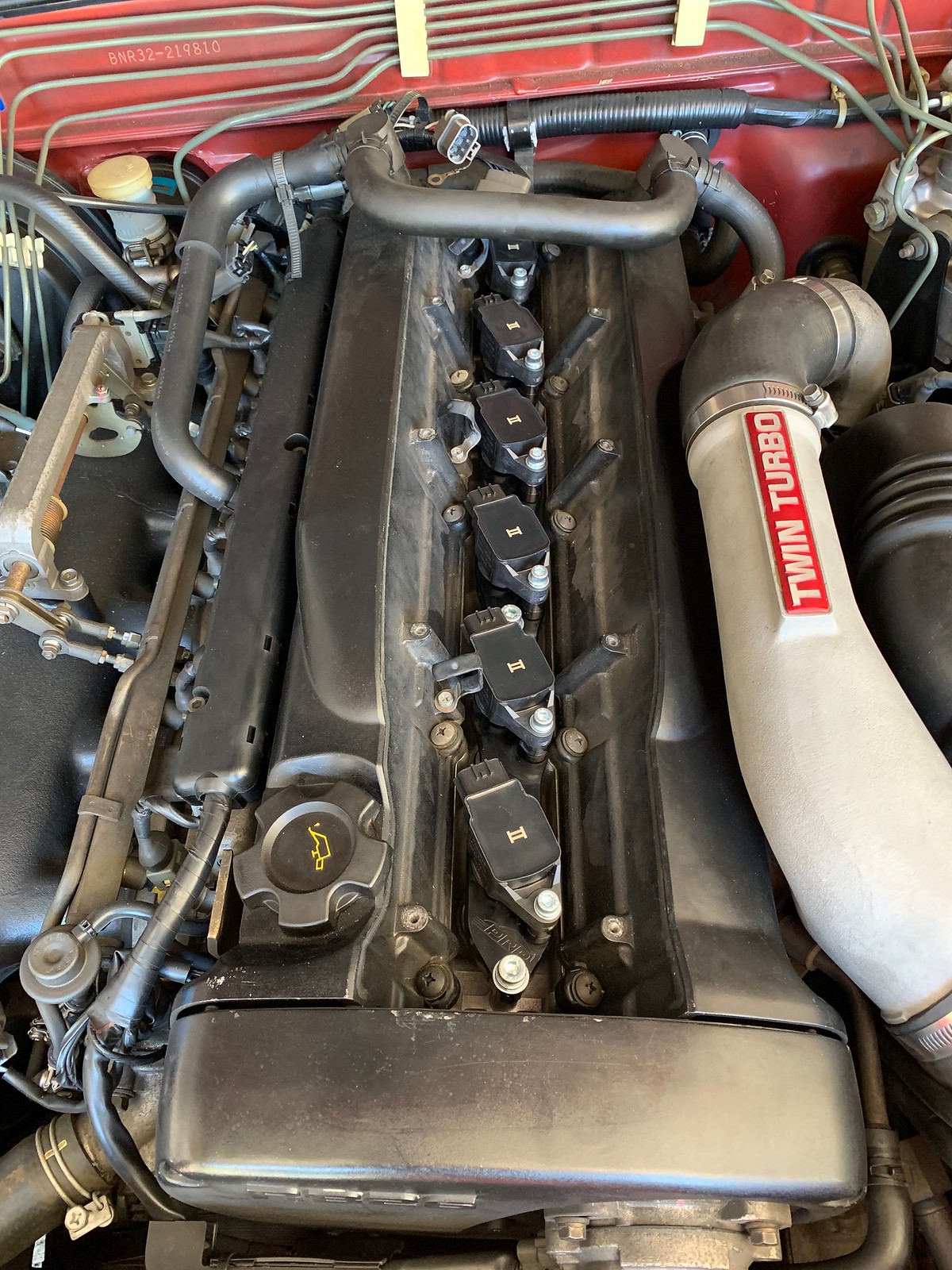 Things get really tight at the back with the harness. I had to stuff the harness a bit under the final coil to get it all routed out the back of the stock cover. PRP would do well to add another 20-30mm to the main connectors back here to make this easier. In the photo below you can see the ground coming out of the body harness - this was originally tied in to one of the igniter mounting screws. With the igniter gone, I found a shorter screw and fastened the ground to one of the igniter mounting bosses on the factory cover. 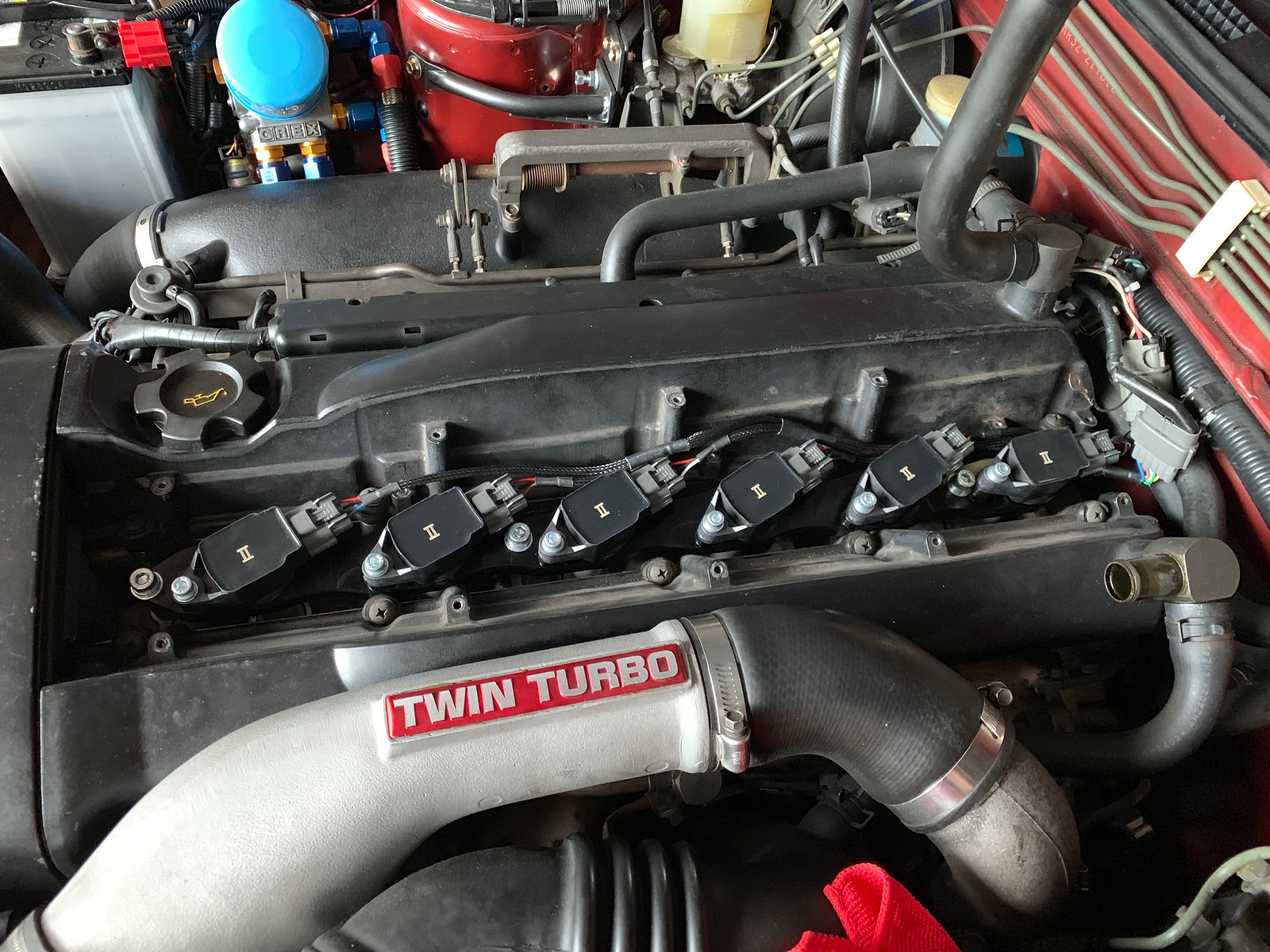 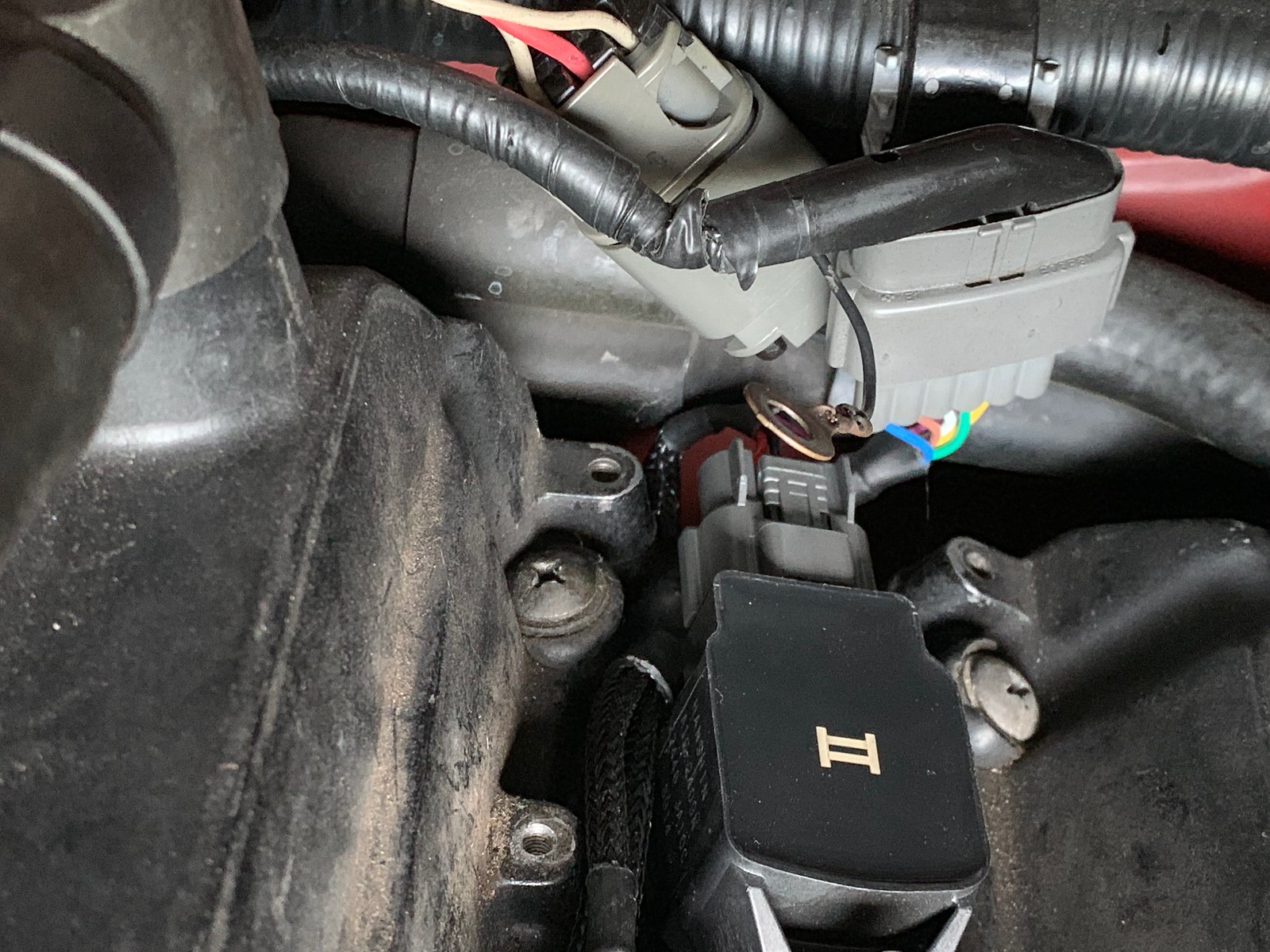 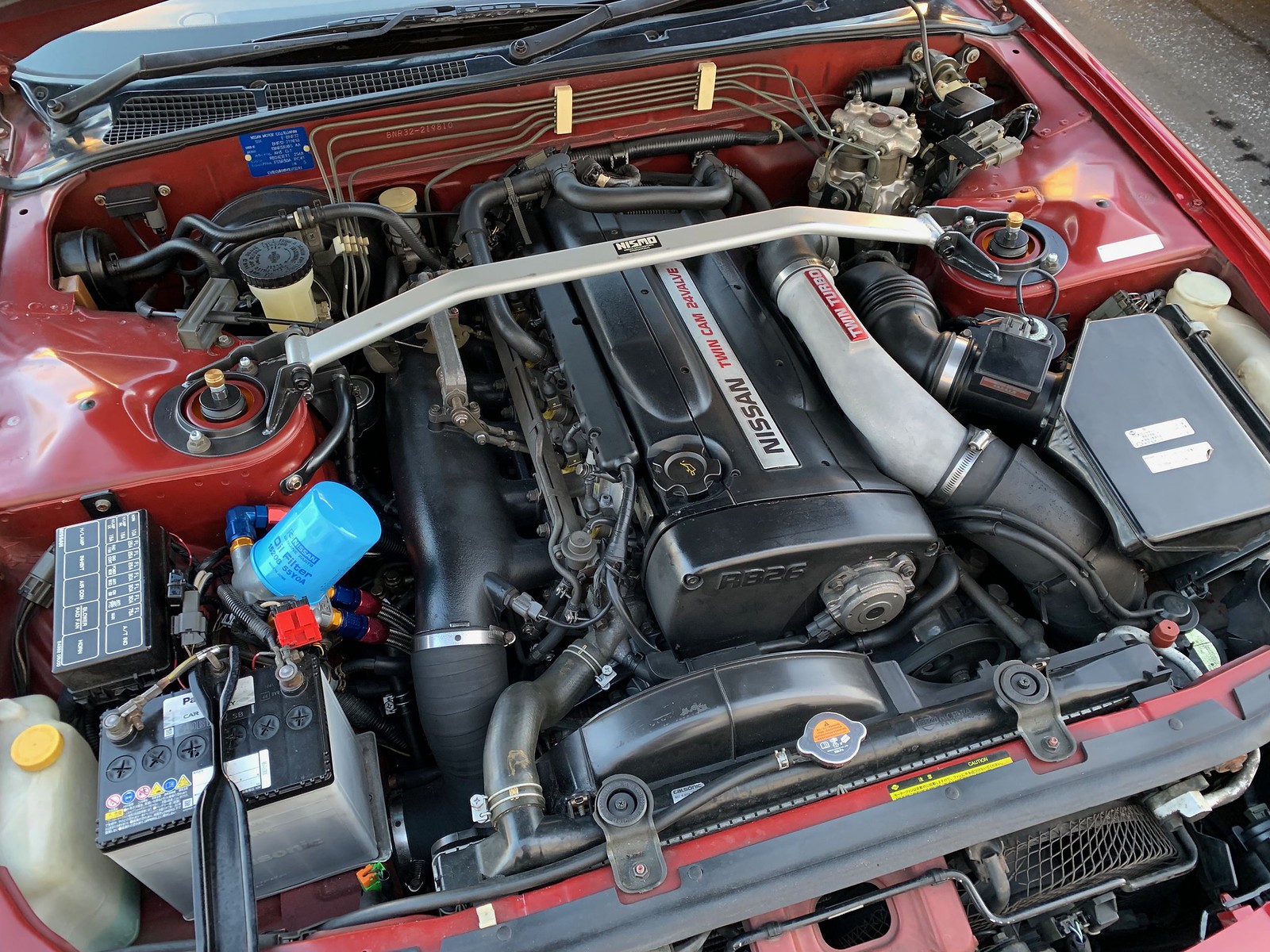 Ignore the fact that you can see the OE igniter in this picture, exposing me as a fraud. That's kind of the point though, pre- and post-install it looks the same.

Rob had a little surprise for me after I brought the car home - a robin's-egg-blue Nissan OE oil filter. I guess the color wasn't selected with a filter relocation kit in mind.

I was not expecting a big or particularly noticeable bump in performance from the R35 coils, especially after Rob found my car's incorrect timing and alleviated some of the symptoms that had made me order this kit in the first place. However, I immediately noticed an improvement in smoothness and response from the motor. It simply revs more smoothly through all RPMs, and it's particularly noticeable on rev-matched downshifts. The blips are quick and clean. It wasn't bad before, but there is suddenly a silky smoothness I didn't know I was missing. Cool!

What's next for the Skyline? A clutch. The more I drive the car, the more the clutch bothers me. It's an OS Giken twin-plate unit, and the plates are sticking together. This means that the bite/engagement point moves around on me, which is frustrating and makes me look like I don't know what I'm doing. Without a clean and reliable clutch action I find myself clunking through the gears. I thought that I needed a new transmission, but I am beginning to think that what I perceive as rough shifting and worn synchros is actually caused by poor engagement and disengagement of this clutch. On top of that stuff, the twin-plate rattle drives me crazy and the pedal is way heavier than it needs to be.

I am going to stay close to stock power levels, so I'm eyeing a Nismo single Coppermix clutch. I believe that Rob is installing one next week on a local GT-R, so I'm hoping that the owner is willing to let me drive the car around the block and confirm that I like how it drives. It's a big job to get to the clutch so I want to know exactly what I'm doing before ordering parts or grabbing a wrench. Stay tuned.
at March 21, 2019