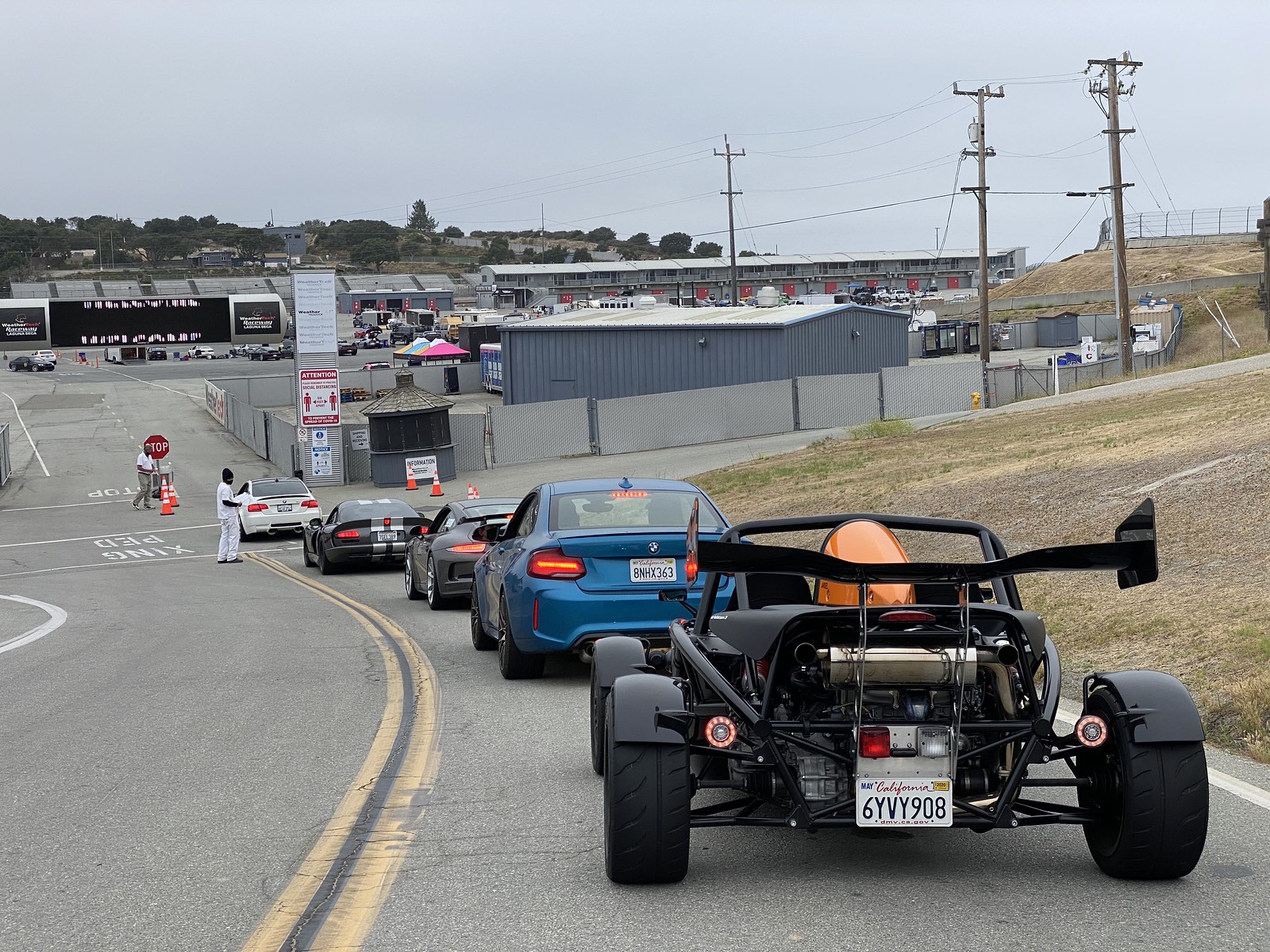 On July 25th I returned to Laguna Seca for one of the first rebooted track days since Covid struck. It was the most crowded track day I've ever attended, I think as a result of two factors: first, pent-up demand; second, 103 dB limit, which is 10-12 dB higher than usual. This was supposed to be the Ferrari Corsa Clienti weekend, but that was nixed, so I think we inherited the higher sound limit. As a result - race cars. For reference, a stock 911 GT3 fails sound on a normal 93 dB day. 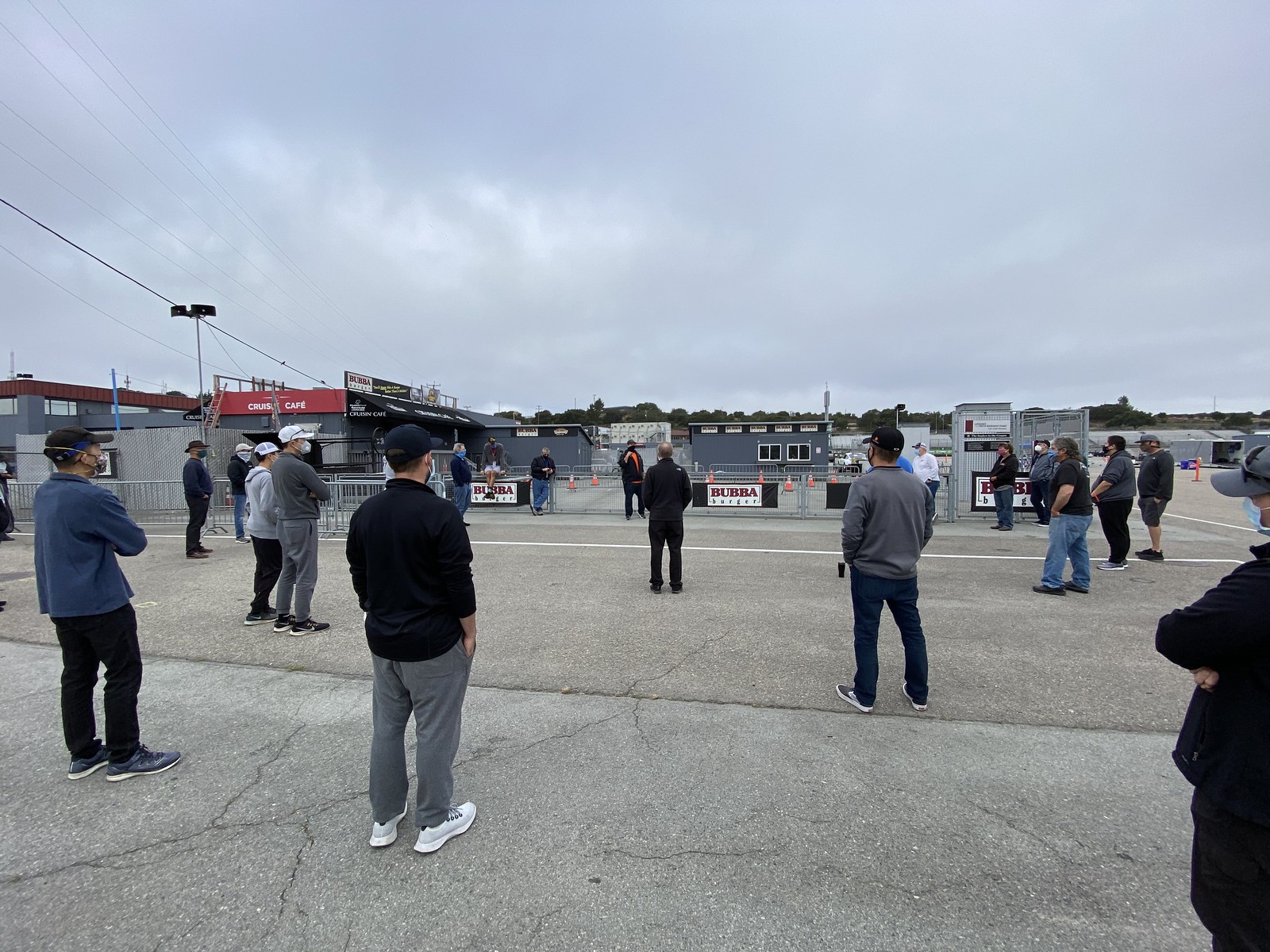 Things were familiar, but different. No guests, and temperature checks at the entrance to the paddock. Unless you had your helmet on, you needed to have your mask on. The driver's meeting was outdoors and spread wide. There were multiple run groups, with duplicates of the same levels, and each one was full at 35 cars. We had 4x 20-minute sessions on the day and a whopping 2 hours between each session. I thought I had accidentally signed up for an autocross with all the waiting. 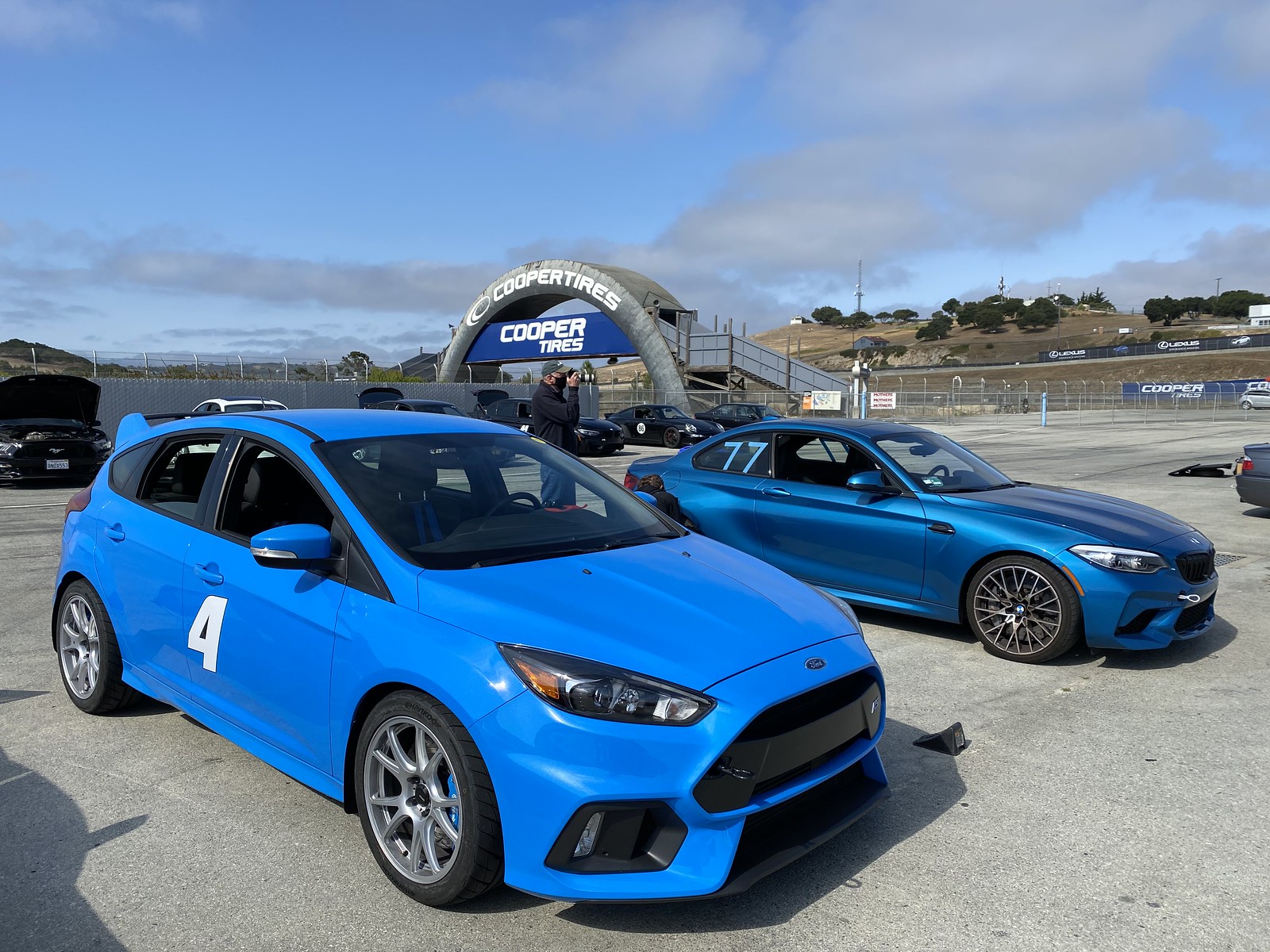 The paddock never fails to impress in Silicon Valley's backyard. 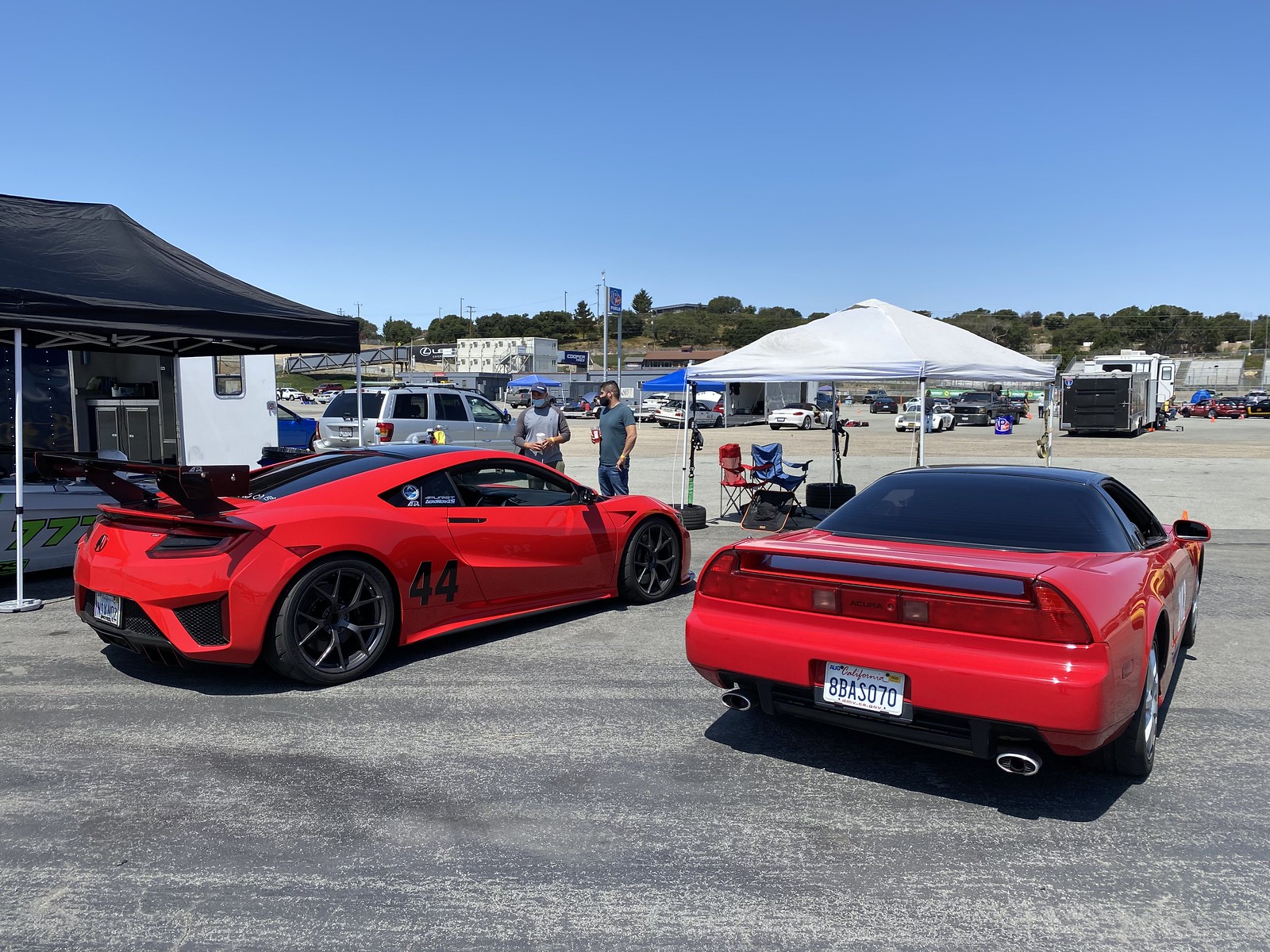 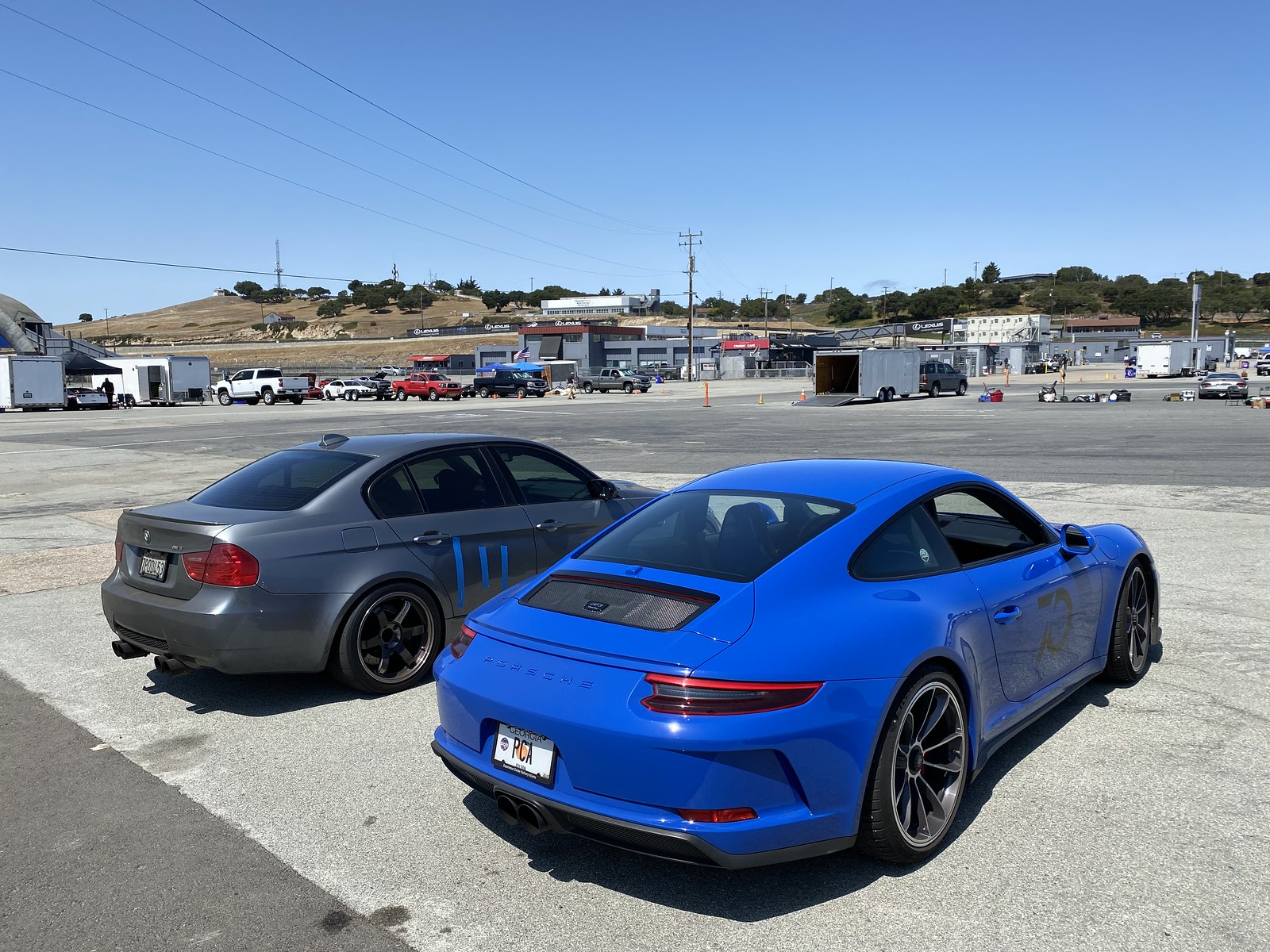 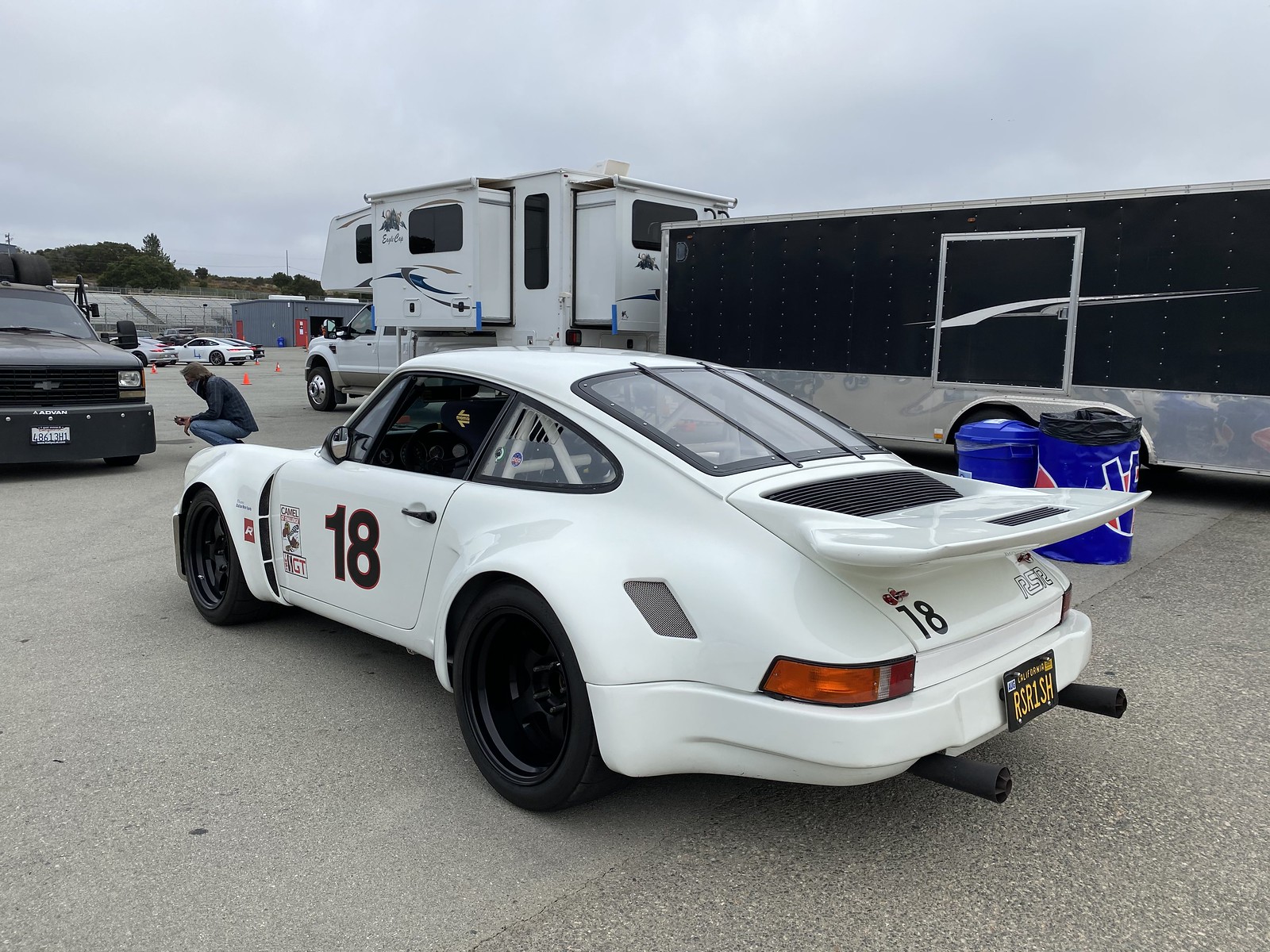 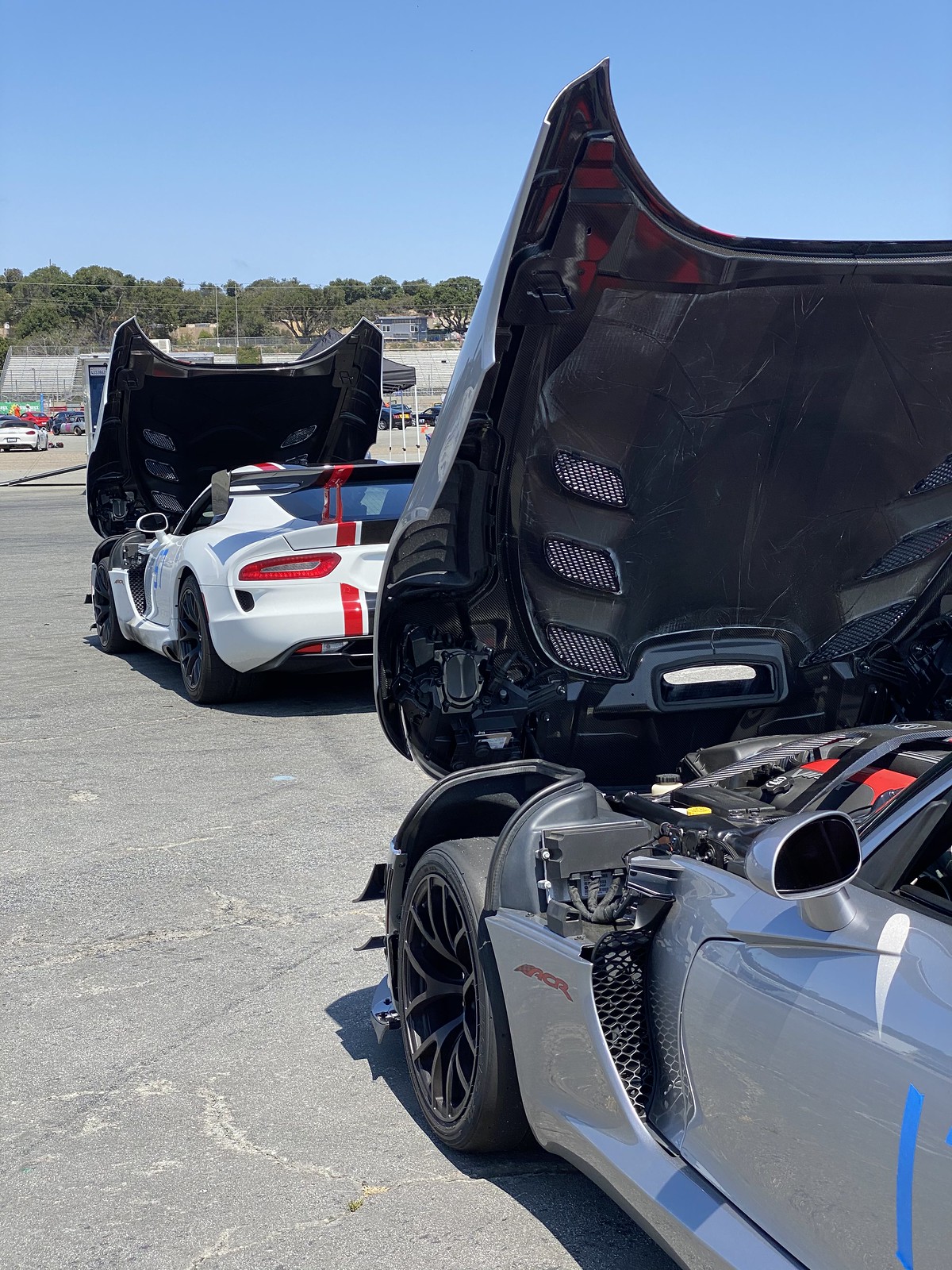 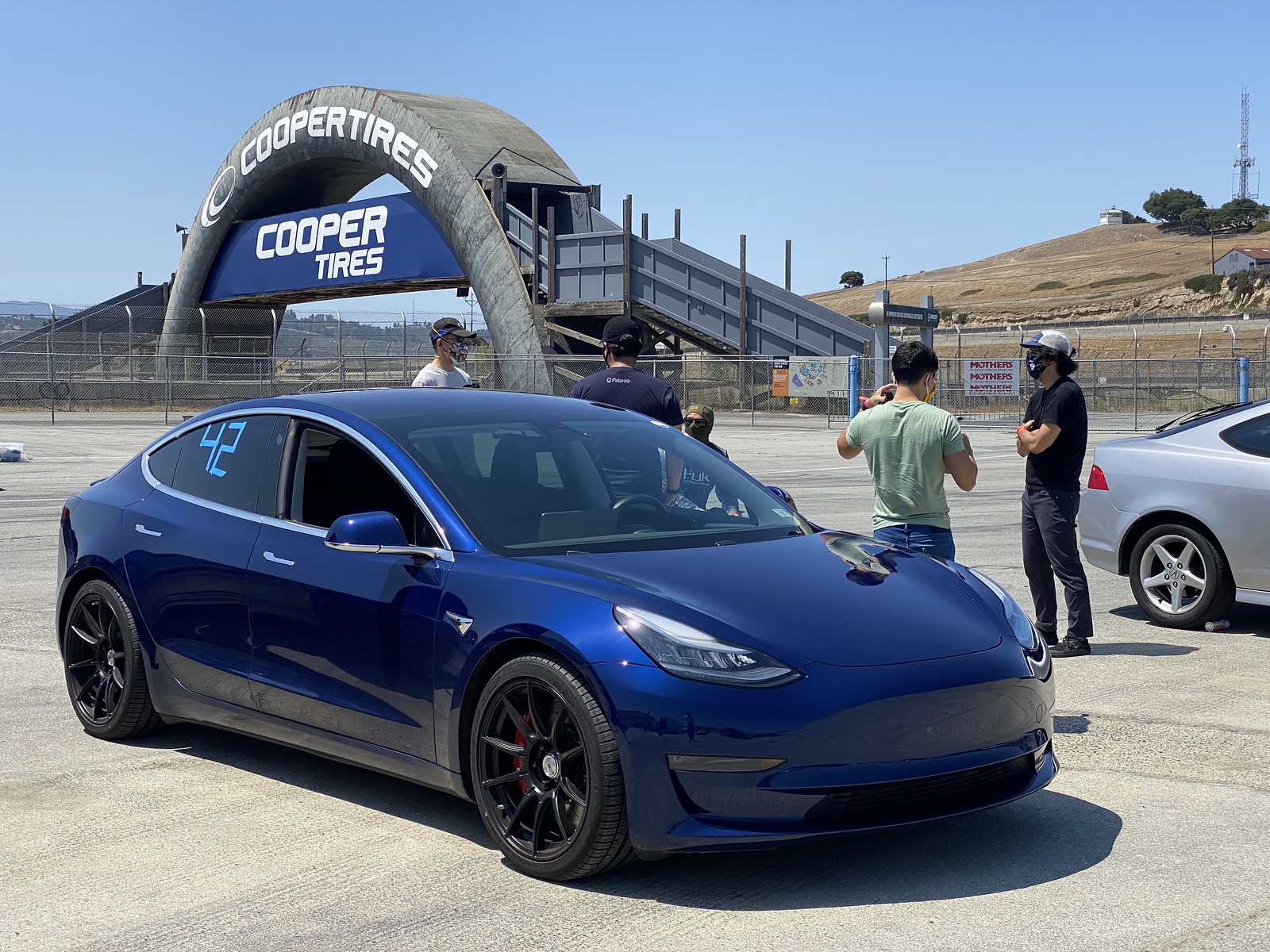 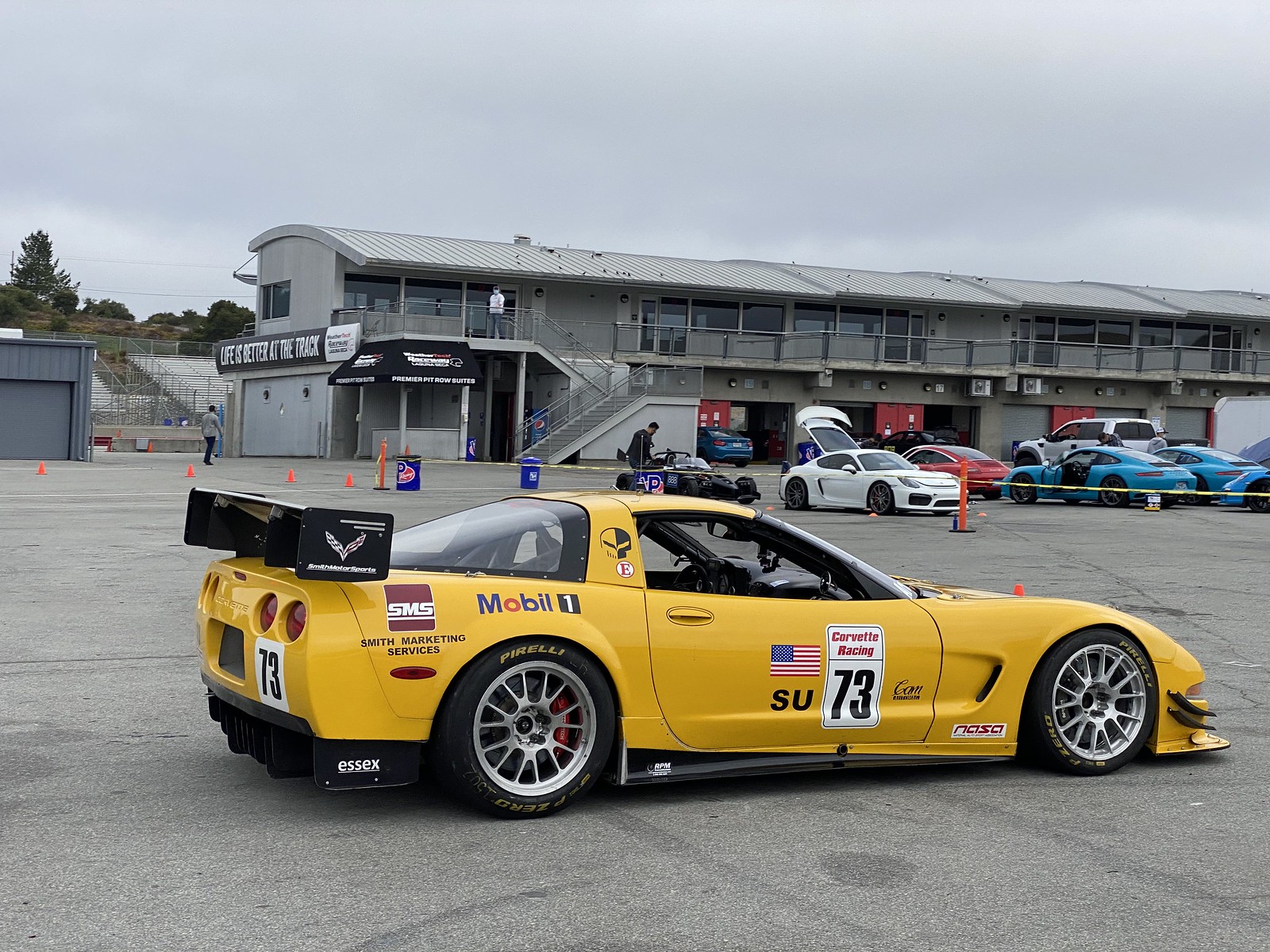 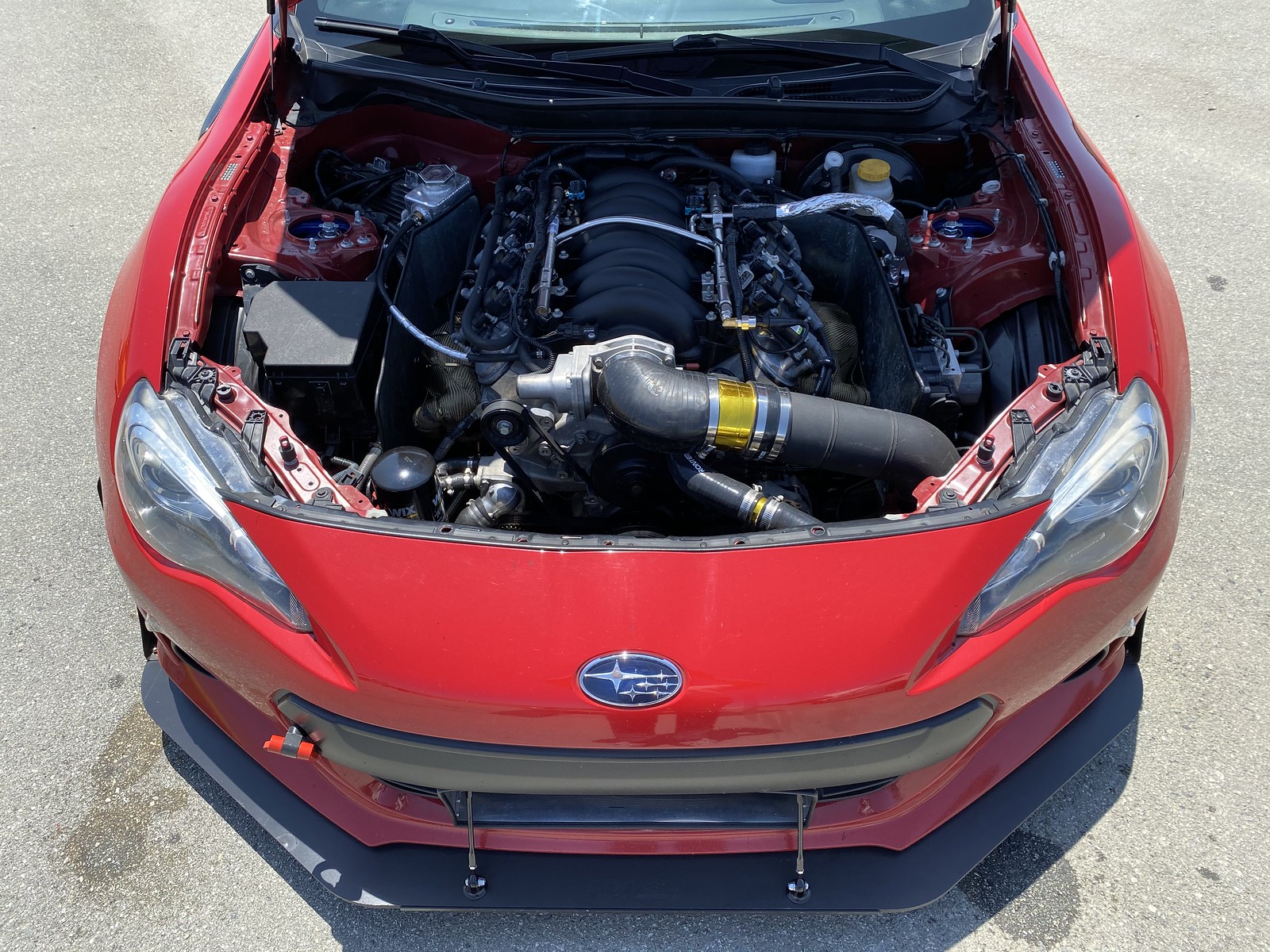 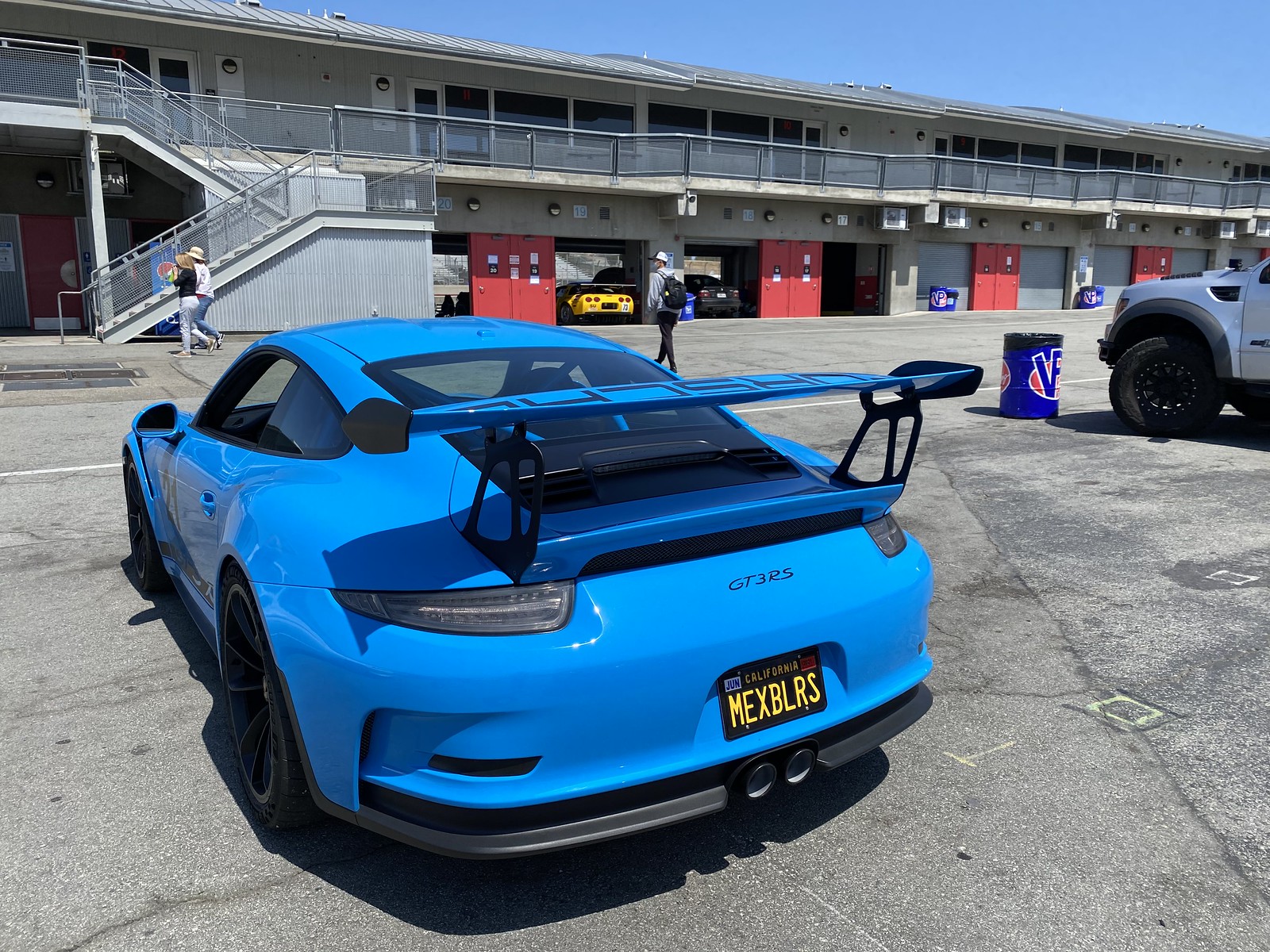 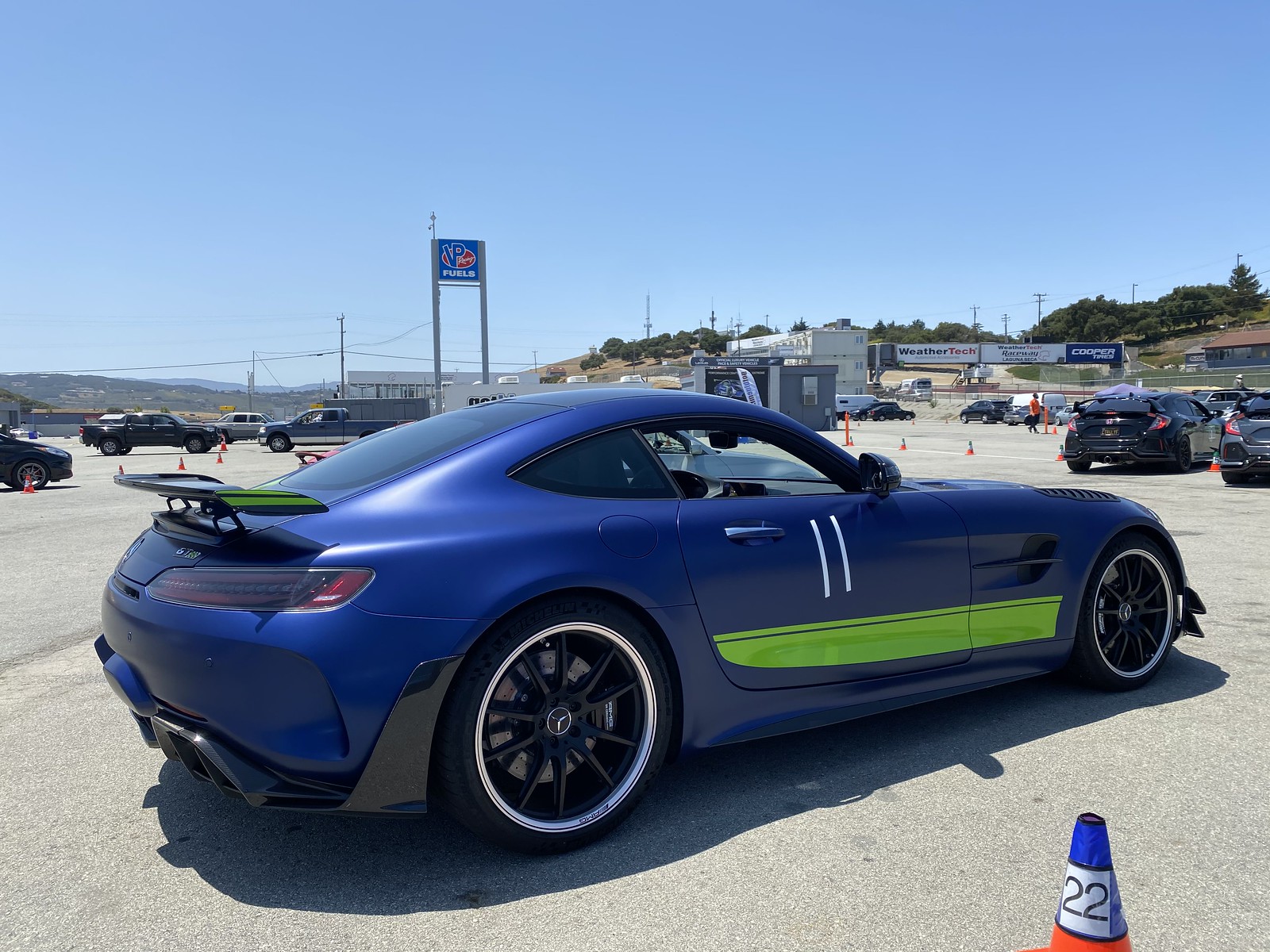 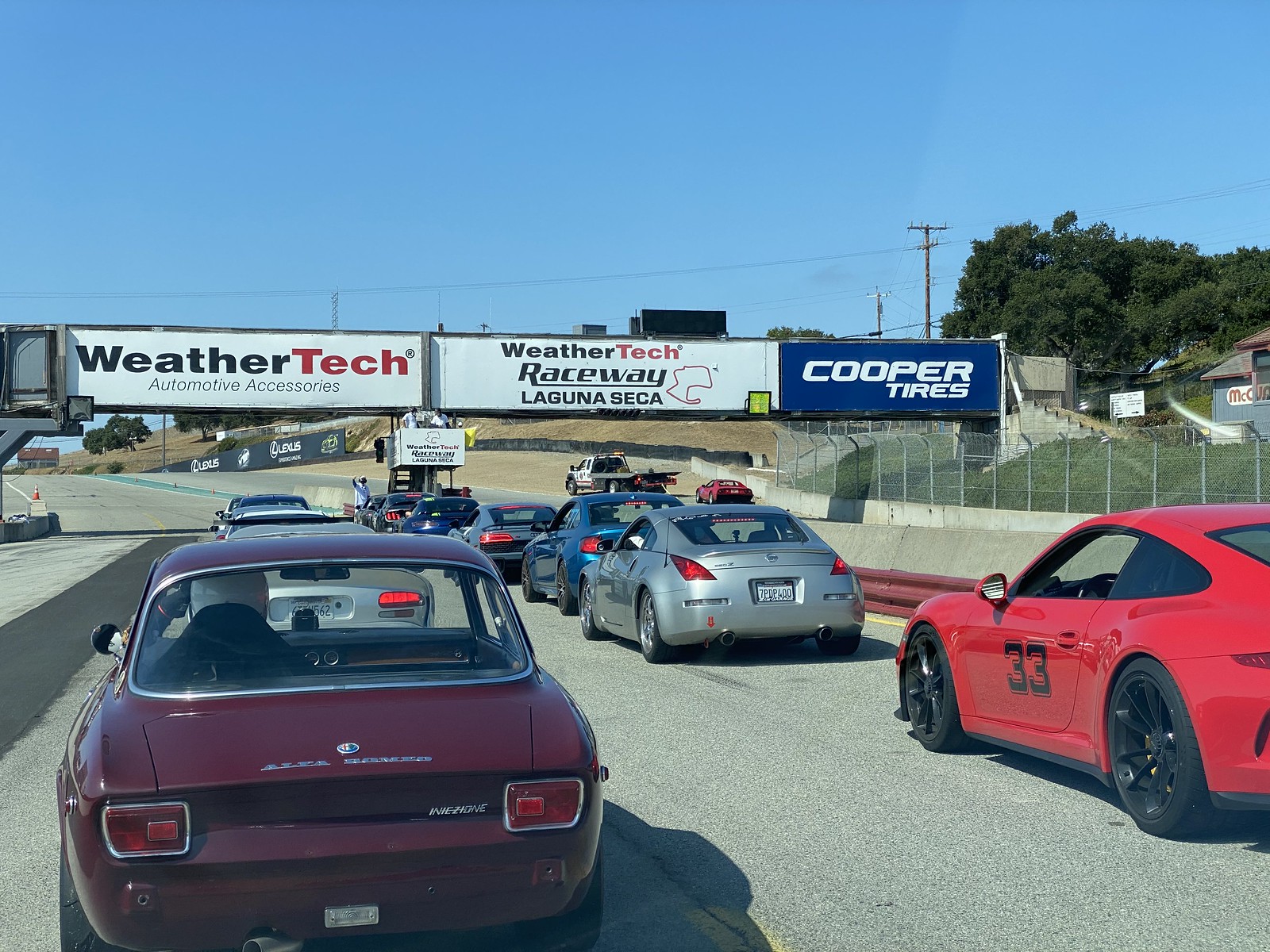 First session of the day got off to a rocky start. Ferrari 328 managed one out lap before pulling over on the front straight. Gave me some time to see who was going to be chasing me on the restart: 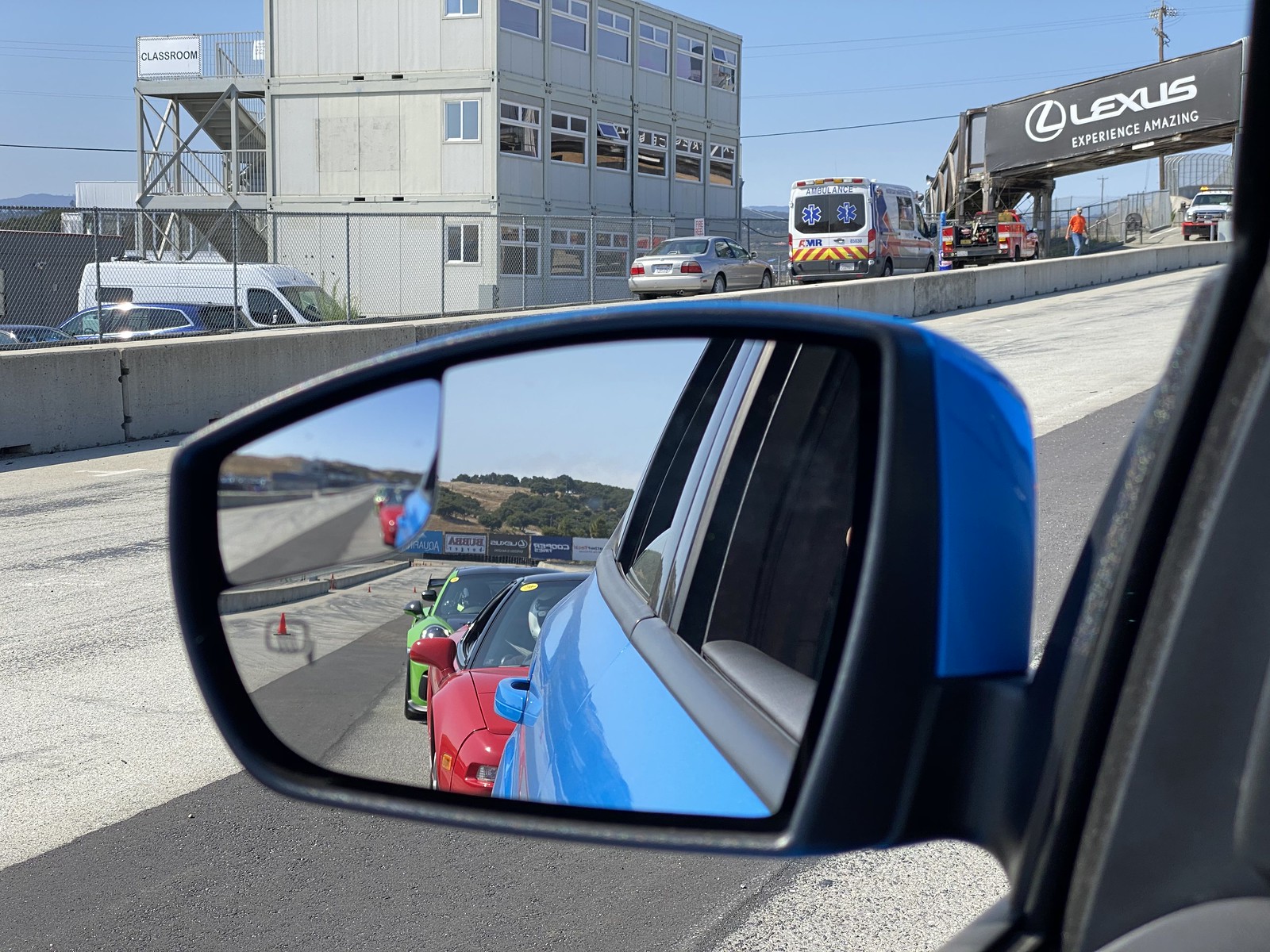 I didn't shell out for any track action glamor shots this time. I ran the whole day in track mode, and the car ran very well overall. Despite the 35-car crowd, for all four sessions I managed to fall into some lucky little pocket without any traffic. The group-mates were courteous, and point-byes were given and received quickly. It's always nice when everyone checks their ego at the door and just focuses on accommodating each other. 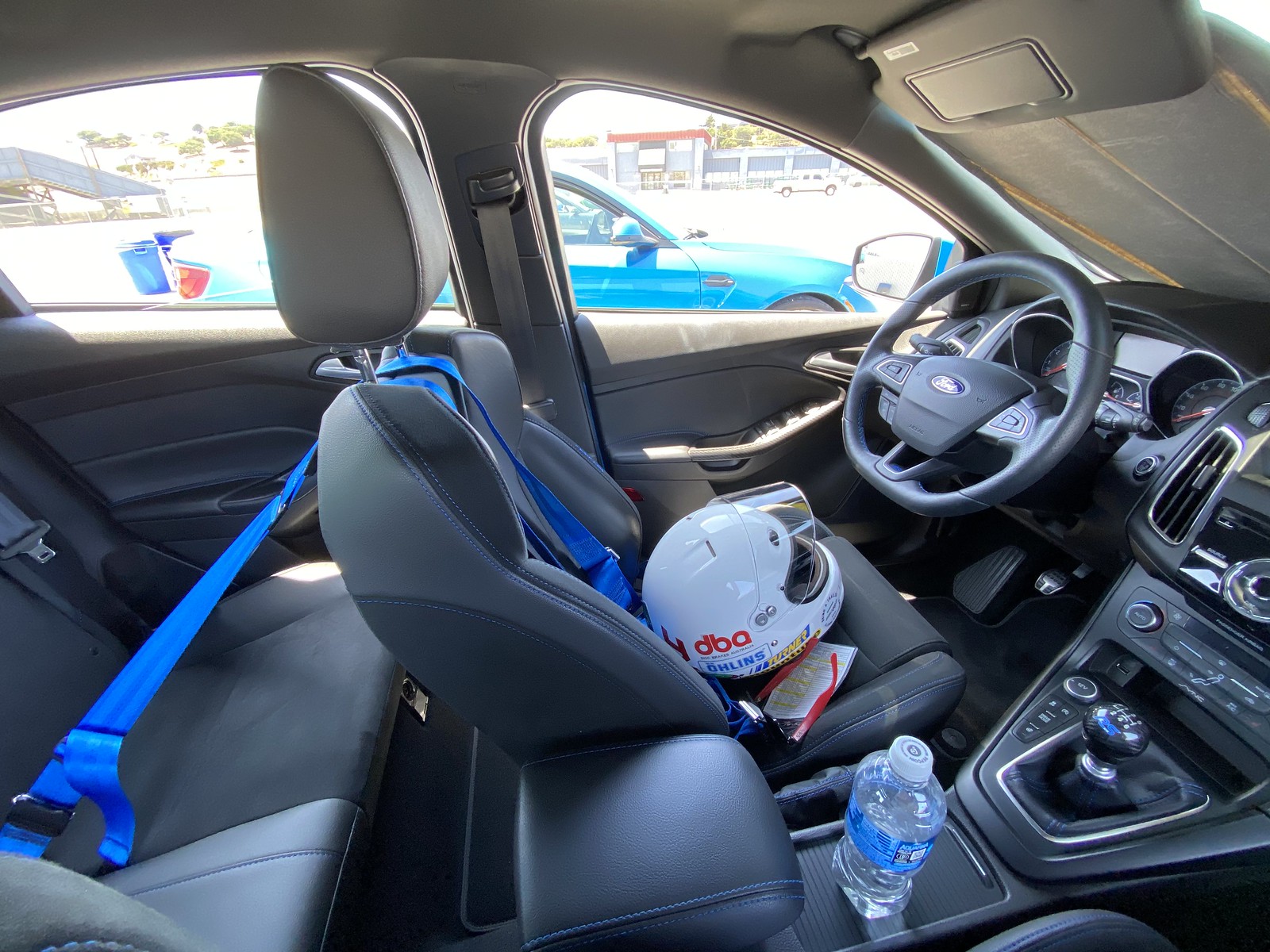 If you've been following along my problem is always cooking the brakes. I made an effort in my sessions to back off when I started to get fade, and as a result they were stronger longer across the day. Not as good as fresh, but they dropped down to maybe 70% across the day rather than ~40% other days. I'm sure the 2 hours between sessions helped as well to bring all the temperatures back down. I remembered my R/C infrared thermometer this time, the readings for the front rotors basically summed it all up: 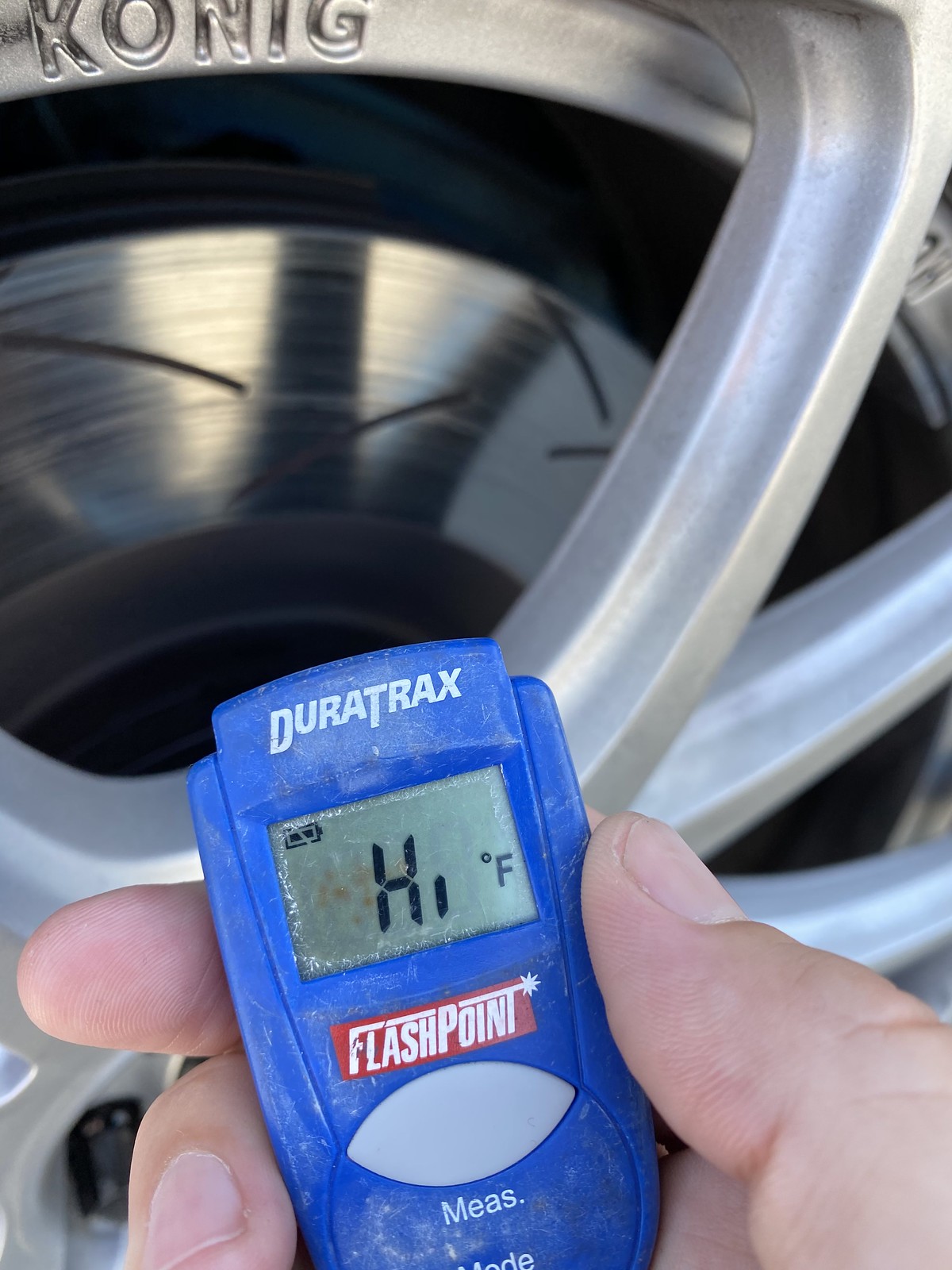 Aside from the brakes, the car was flawless. It returned a fantastic 6.3 mpg on the track. The tires and brakes are wearing well (slowly), and while I don't use a lap timer, I felt fast. Using the whole width of the track and carrying more speed through the corners.

Good news: I have solved the 16" tire dilemma. I am going to solve it by not buying 16" tires at all.If you've been following along, it has been my plan to have my 16" M5 wheels refinished in Nogaro a la Sport Evo. After many dead ends, I had a friend recommend a shop that THEIR friend was using, and that shop had their OWN shop they work with that could refinish his wheels in two colors. Whew. So I called up the intermediate shop and they said yes, this shop they use can "probably do it." I was told to expect $225-250/wheel for full refurbishment and paint in two colors.I was scheduled to drop the wheels off Monday morning. Sunday night, I got to thinking. These 16s will be nice, but they are not the ULTIMATE wheel I really want to have on this car. There are some 17" options that, to me, are just absolutely killer. I plan to take that step eventually, so... why am I about to pay $1000 to have these 16s refinished, then throw $600 tires on them, if my heart's not set on it? Not to mention the hassle of trying to get these wheel painted correctly. The wheels are in nice shape as-is, they don't need the refurb and I would not recover any of the expense if I sold them.So it came back to the list of 17s, all of them expensive. Here is my shorthand worksheet:Of the batch, the TE37s are the bargain at 70,000JPY (~$635) a piece. Unfortunately, those are exactly the same wheels that I have on my GTR. I kept coming back to the BBS E50s, Every E30M I see on the internet that really stops me in my tracks is on them, either DTM or street car. Believing that BBS no longer manufactured the wheel, I had the NTM/replica wheels as far as the shopping cart and ready for checkout a couple evenings ago.Then, someone on FB mentioned that BBS would build me some for the same price. Thinking that he was yanking my chain, I asked him to point me in the right direction. He provided a contact at BBS Americas outside of Atlanta and in a matter of hours I had full details on what they could do for me. The representative explained to me that production of the magesium wheels had been halted few years ago, but enough people requested them that they dusted off the casting dies and tripled the unit price to make it worth their while. The rep threw a lot of information at me in a very short phone call, so this information is not 100% gospel, but he explained that BBS still offers 4 magnesium E50 centers in 5x120 bolt pitch. I asked him for a 17x8 et15 size, and he gave me two options: the first, his recommendation, was a 2" outer lip with a 6" inner lip. The second was a 1" outer lip with a 7" inner lip, same offset, with a different much more "deep" magnesium center. He provided some section drawings and I did my best Keynote engineering: 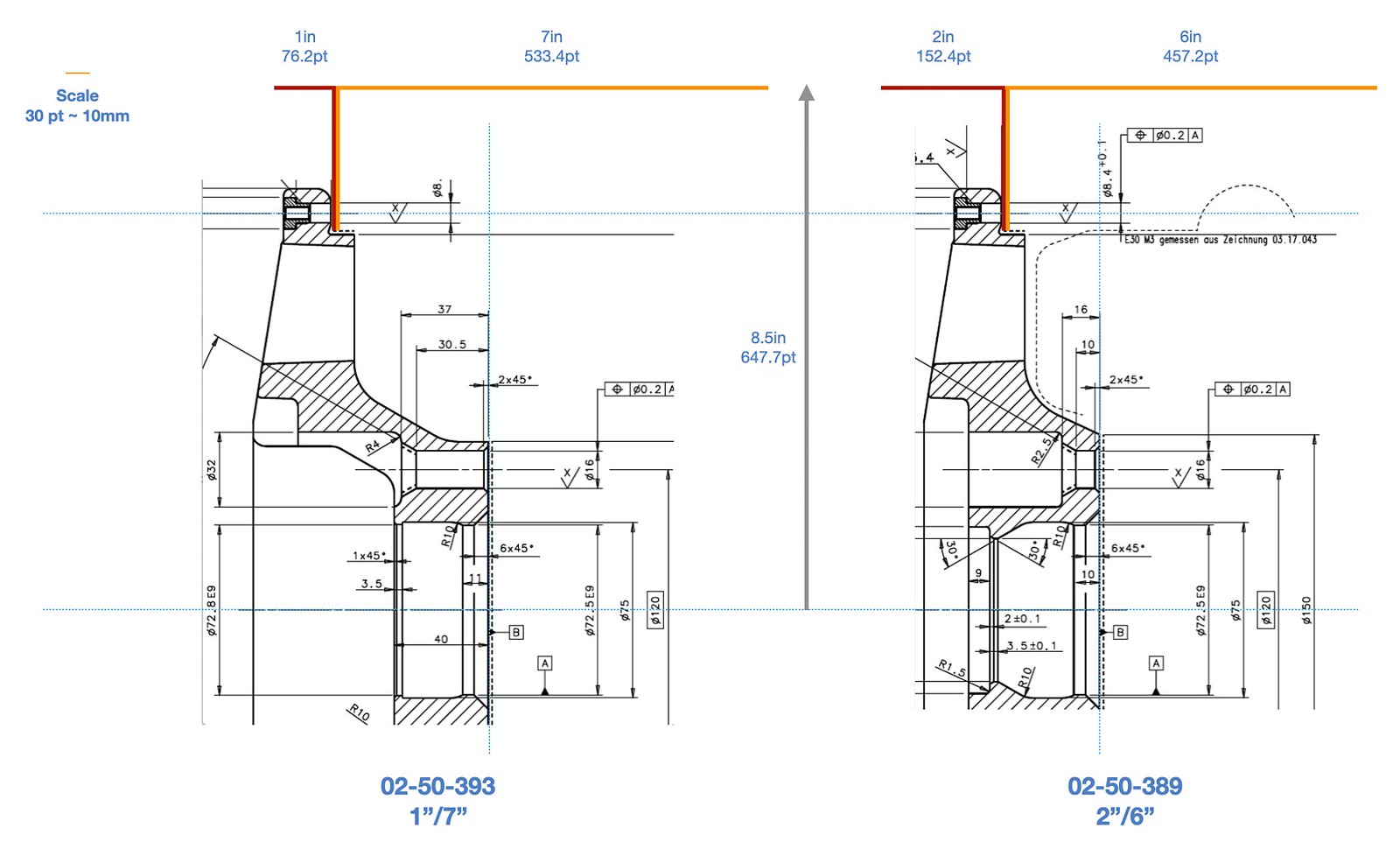 Note: the thickness of the center at the hoop bolting interface is 20mm, which is cut off in the drawing. True for both centers.So I studied these drawings and determined that the 2/6" was going to be the better choice. I want the faces close to flush with the outer lip, like the race cars had, but the 1/7" was a little over-the-top. The center actually sticks proud of the lip (like those reverse-mount VW guys do... yikes) and there seems to be a very deep central pocket that could really change the look of the wheel. Some other tidbits I got from the rep:So after poring over photos available online, and drawing up these sections based on the drawings he provided, and even throwing it into CAD to get a rough idea of the look - I pulled the trigger today. 17x8 et15 square setup in gold. I consulted a couple of old chassis friends from Tesla and they said that new-cast magnesium should not be a problem on the street. They look like absolutely torture to clean but I can live with it because they are amazing. I love how they look, I am excited for the gold on a silver car, I love that they're magnesium and that they were used on the racecars. The centers are $675/ea and the 4 finished wheels will set me back $4700. It's almost double what I've ever spent on wheels... or really any aftermarket part for any of my cars. But this M3 is the one that I'm putting all the good parts, the 'keeper' that will get all the dream parts and look just how I want it to look. And again, it would only be $1600 more if I went through this whole exercise to re-fit the 16" M5 wheels.I am keen not to over-tire the car, which is why I'm going with a square setup... I don't think the M3 needs staggered wheels. At this time I am planning to run 215/40 up front to make sure I don't have fitment issues, and I am on the fence about whether to do 215 in the rear as well or go up to 235/40. I have plenty of time to think about it, as the wheels are probably about 3 months away.
at July 08, 2020 No comments: