The RS has been chugging along as my daily driver for the past 7 months since my last update, and I've been happy with the Mountune exhaust. Aside from having the rear tires plugged after they both discovered some roadside screws, it's been smooth sailing. On the way to Monterey for car week I crossed the 10k mark. 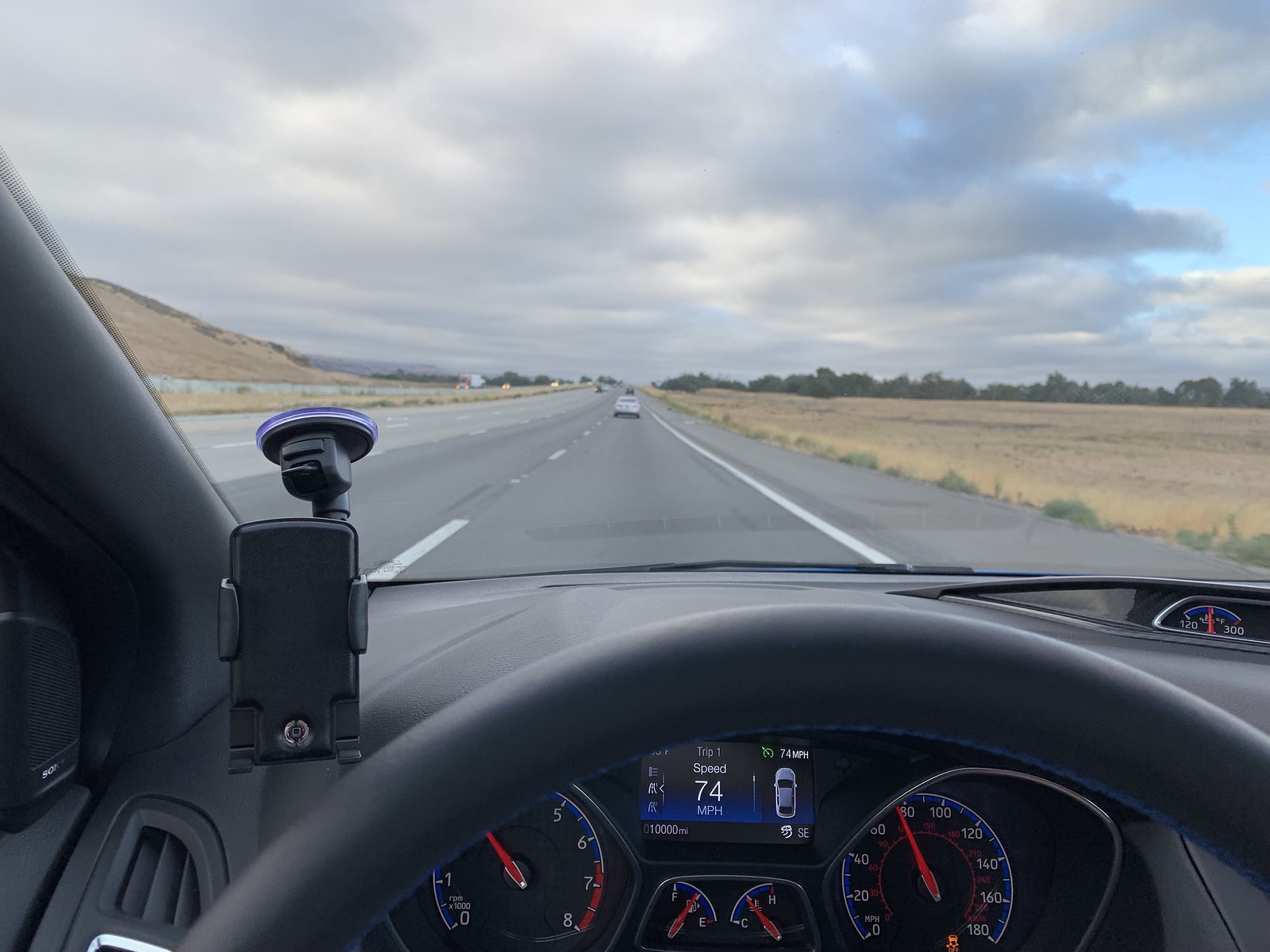 I have recently re-committed myself to getting out and driving more track days. Back in 2014/2015 I had a run of track days in my Miata (all at Laguna Seca) but then I lost momentum and hung up the helmet. I guess I just got busy. The Adrenaline academy last summer lit the flame again and I decided to shake off the excuses and get back on the track.

My Miata has always been my default track choice because (1) it's a Miata, and (2) it's not worth a particularly large amount, so if I totaled it I could walk away without being financially undone. This summer I started to get serious about making the Miata a comfortable and safe place to drive hard. Almost as soon as I started, I ran up against the same issue that foiled me before: I do not fit comfortably in my Miata. It's crazy, considering how everyone and their sister tracks a Miata, but the racing seat situation is pretty dire for anyone 6' or over in an NB. There is not a racing seat out there that gets me low enough to clear the roll bar safely without requiring major modification to the car. I track so infrequently that I am not willing to make those compromises (crush/remove the door cards, bash in the transmission tunnel, cut out the floor and fabricate drop mounts, remove the stock airbag steering wheel for something that comes away from my knees) for a dual-purpose street/track car. For once, Miata is not the answer. 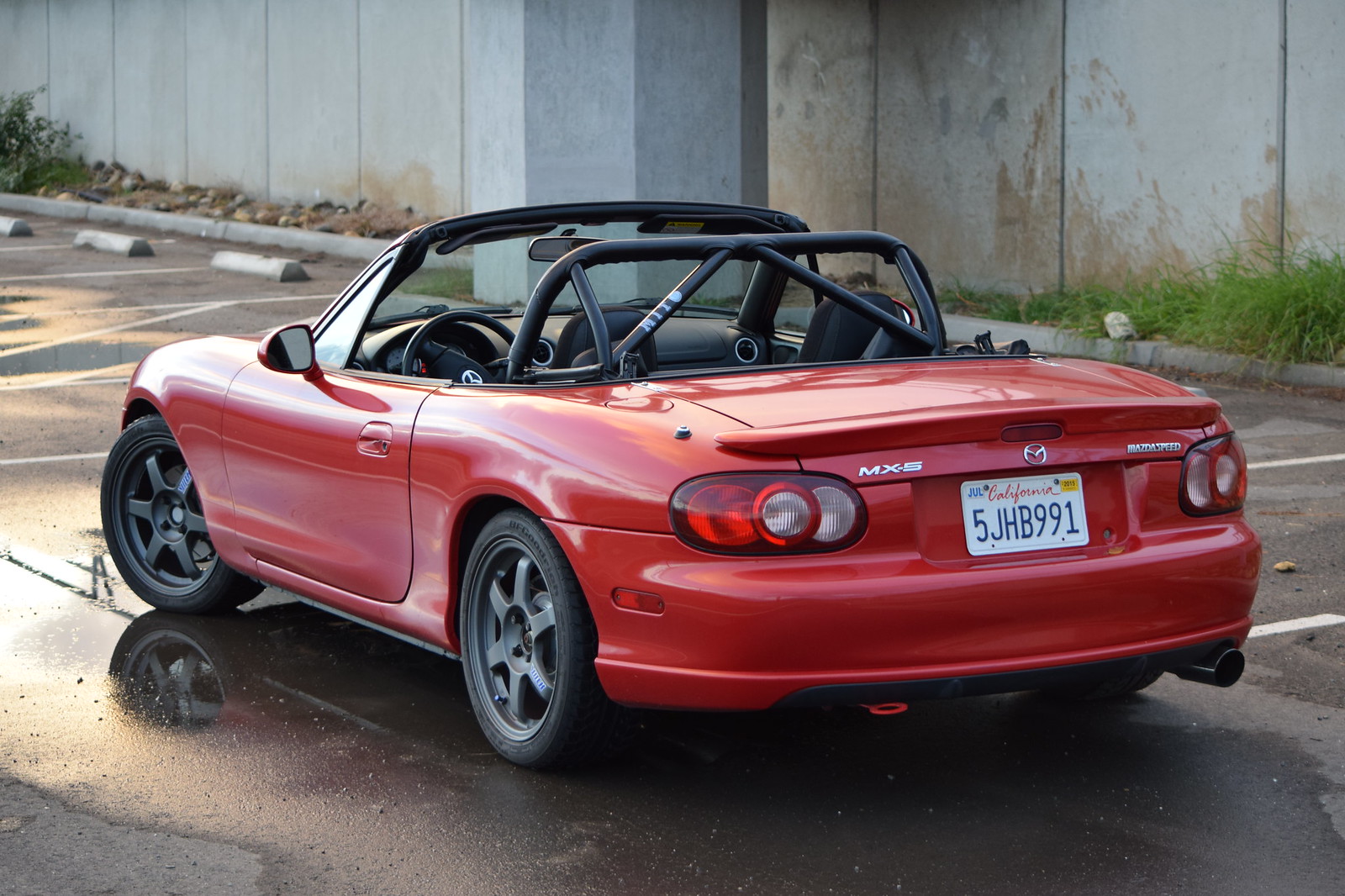 So I looked around at the garage and got to thinking about how much I enjoyed the Adrenaline academy, how enjoyable it was to toss around the RS and how it conveyed so much confidence behind the wheel. I had resisted the idea of running my daily driver but I decided that, with the correct preparation, it could be done. About a week ago I saw that there were still some slots open with a group running at Laguna Seca on Saturday, so I set to work. The first step was to install a harness to keep me planted, and let me focus on driving rather than bracing myself while flying around the track. I looked at harness bars but dismissed them pretty quickly because I am not willing to compromise the utility of my car in that way. I discovered the Schroth Quick Fit and was impressed by the FMVSS certification and testing behind the product.

The Quick Fit really is the perfect solution for me - affordable, requires extremely minor modification to the car (and completely irreversible), and clips in and out in all of 30 seconds. Here's some detail of how it works and installs. 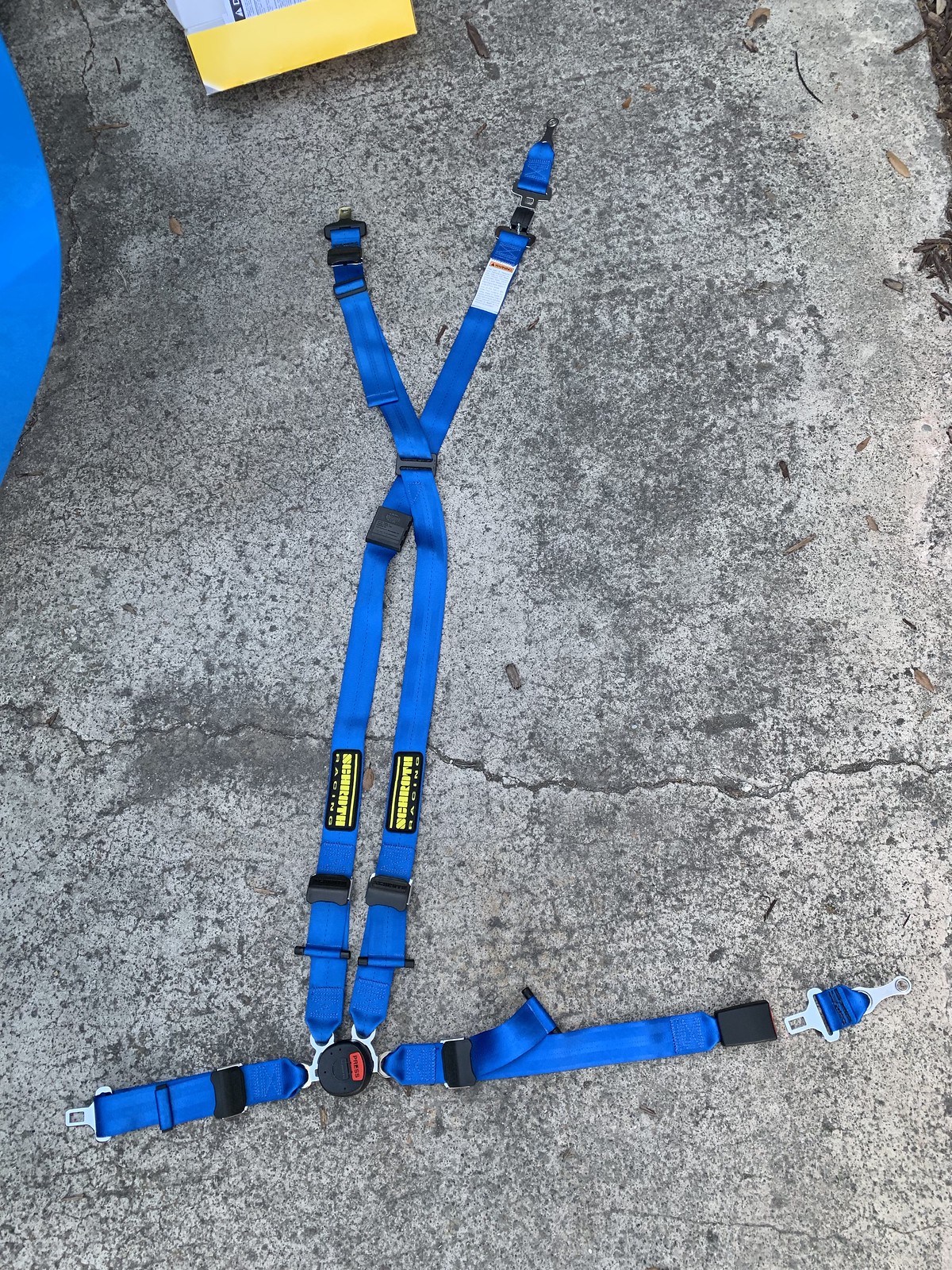 The image above shows the driver side belt. I went with the "Pro" variant, which has all belts coming together in one central hub so that the shoulder belts are angled and can retain a HANS device. You can see that on the inboard side, the belt clips into the factory female receptacles front and rear. This has the benefit of indicating to your vehicle that there is a belt clipped in, so it runs the less-aggressive airbag deployment protocol versus what it would run if it assumed you were an unbelted occupant. 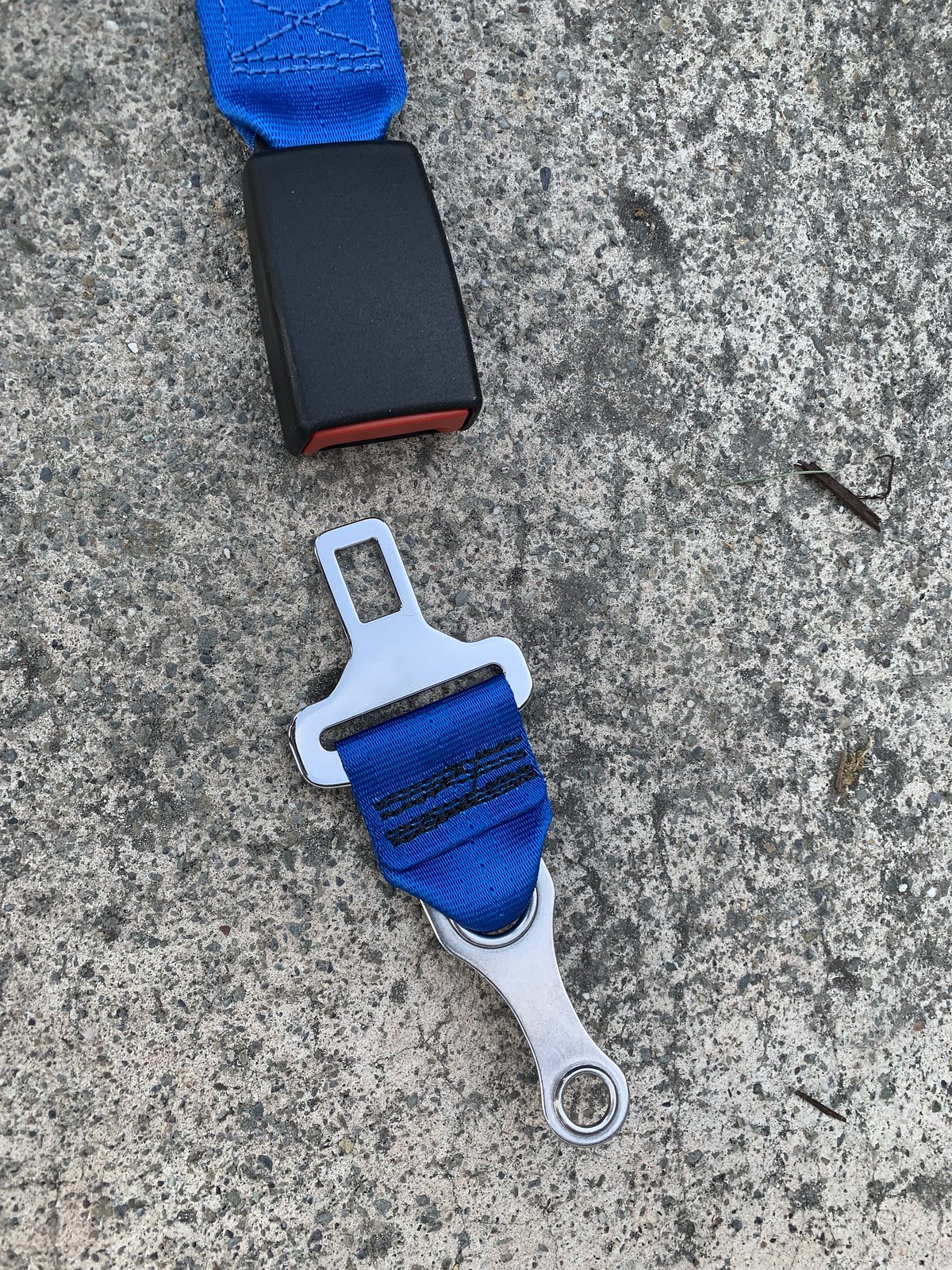 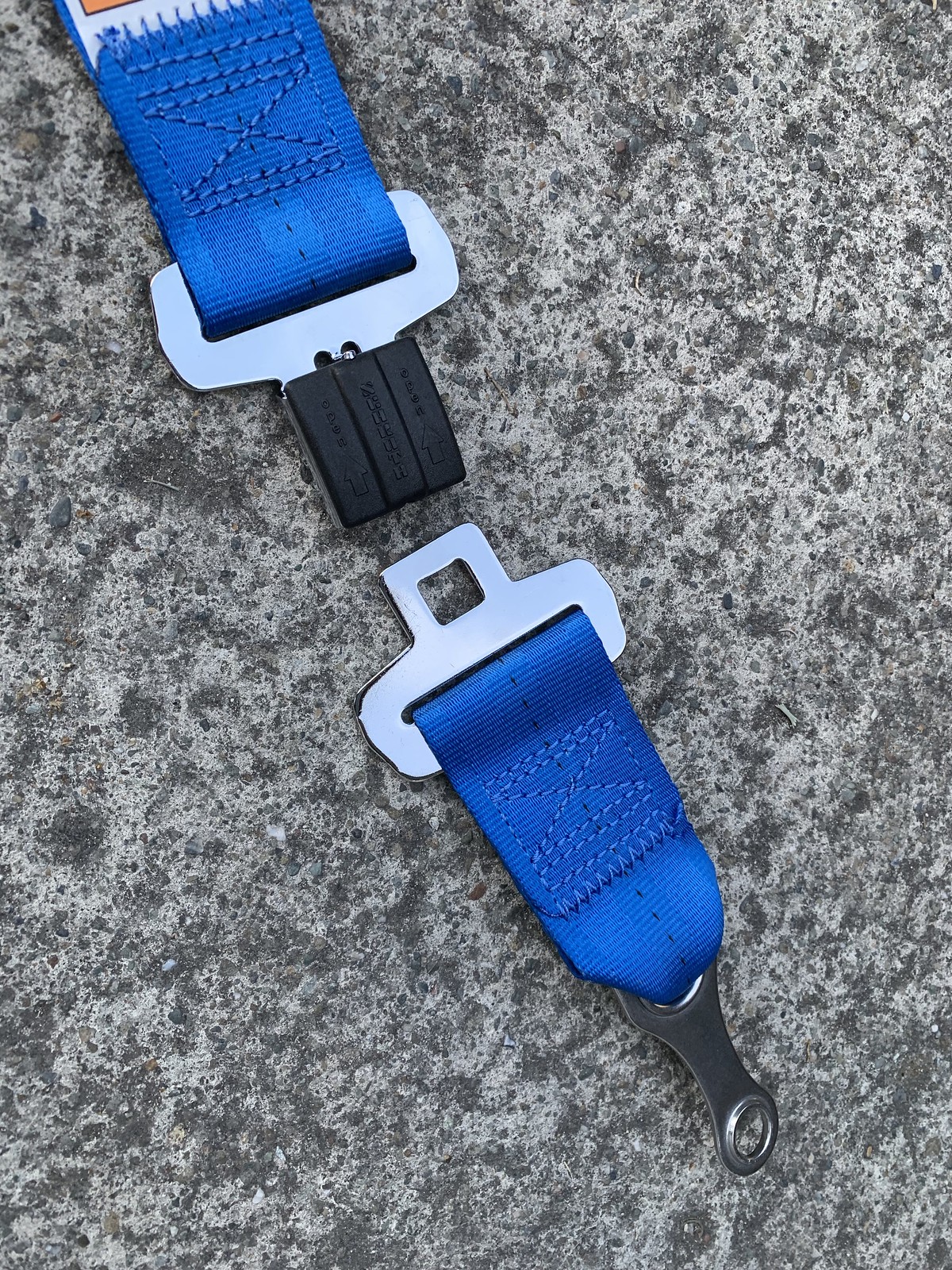 On the outboard sides, you need to install two add-on pigtails, one front (first photo) and one rear (second). The rear mounting tab needs to be bent 90* out of the box. 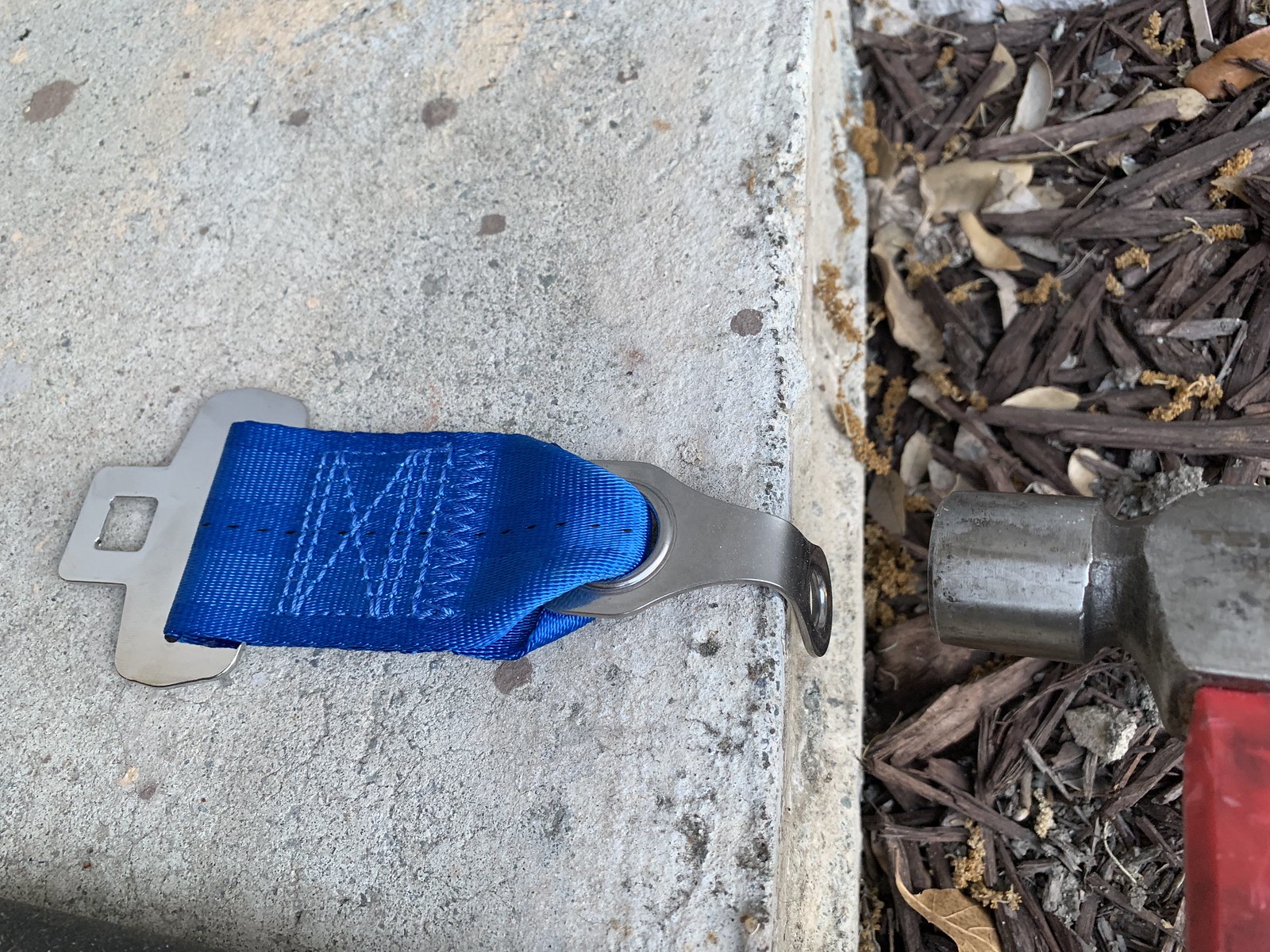 The stock seat cushion swings up and reveals the fixing point for the rear pigtail - the lower mount for the rear belt. Add the pigtail to the stack, torque it to 30 ft-lbs, and that's it. 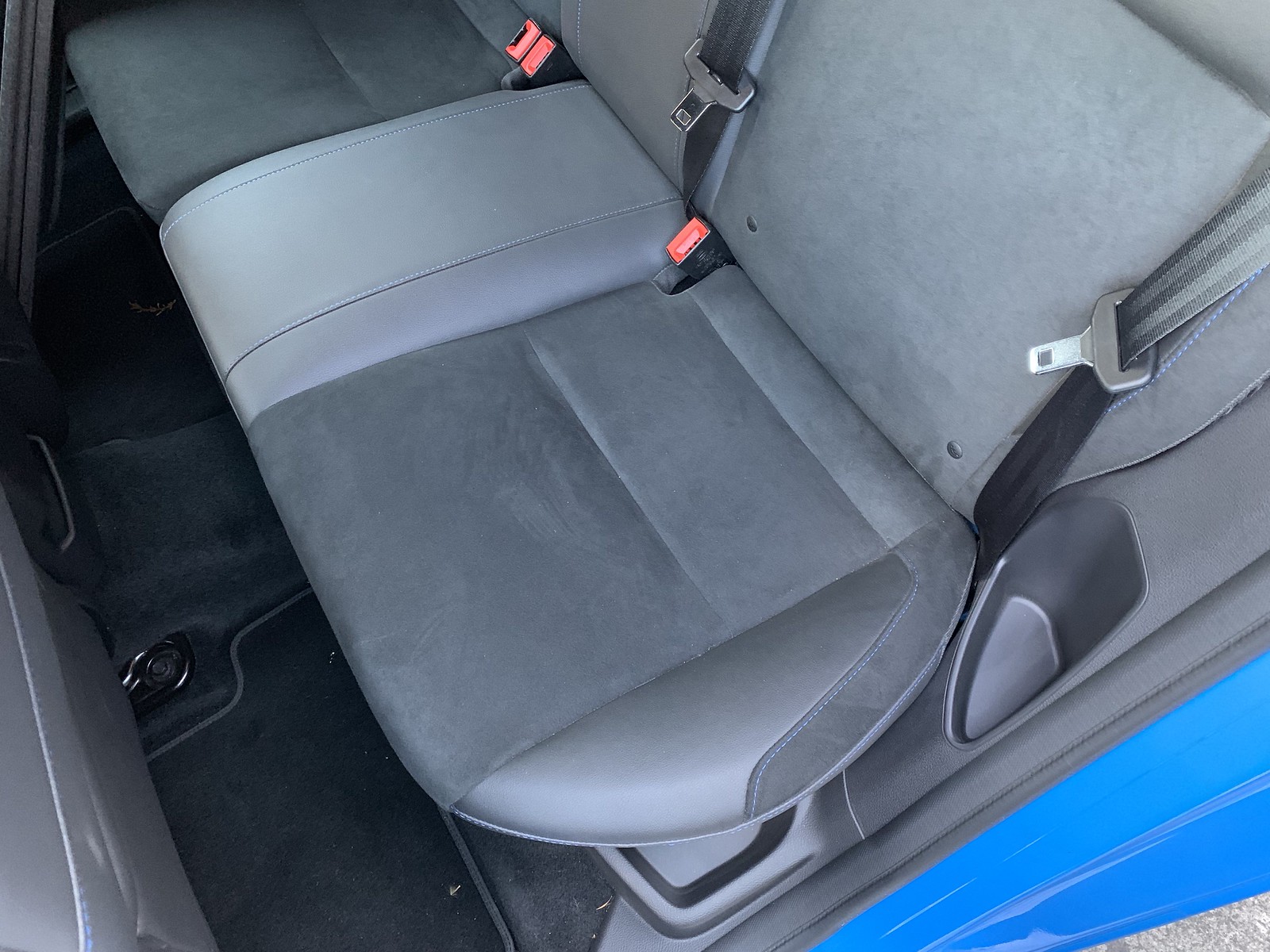 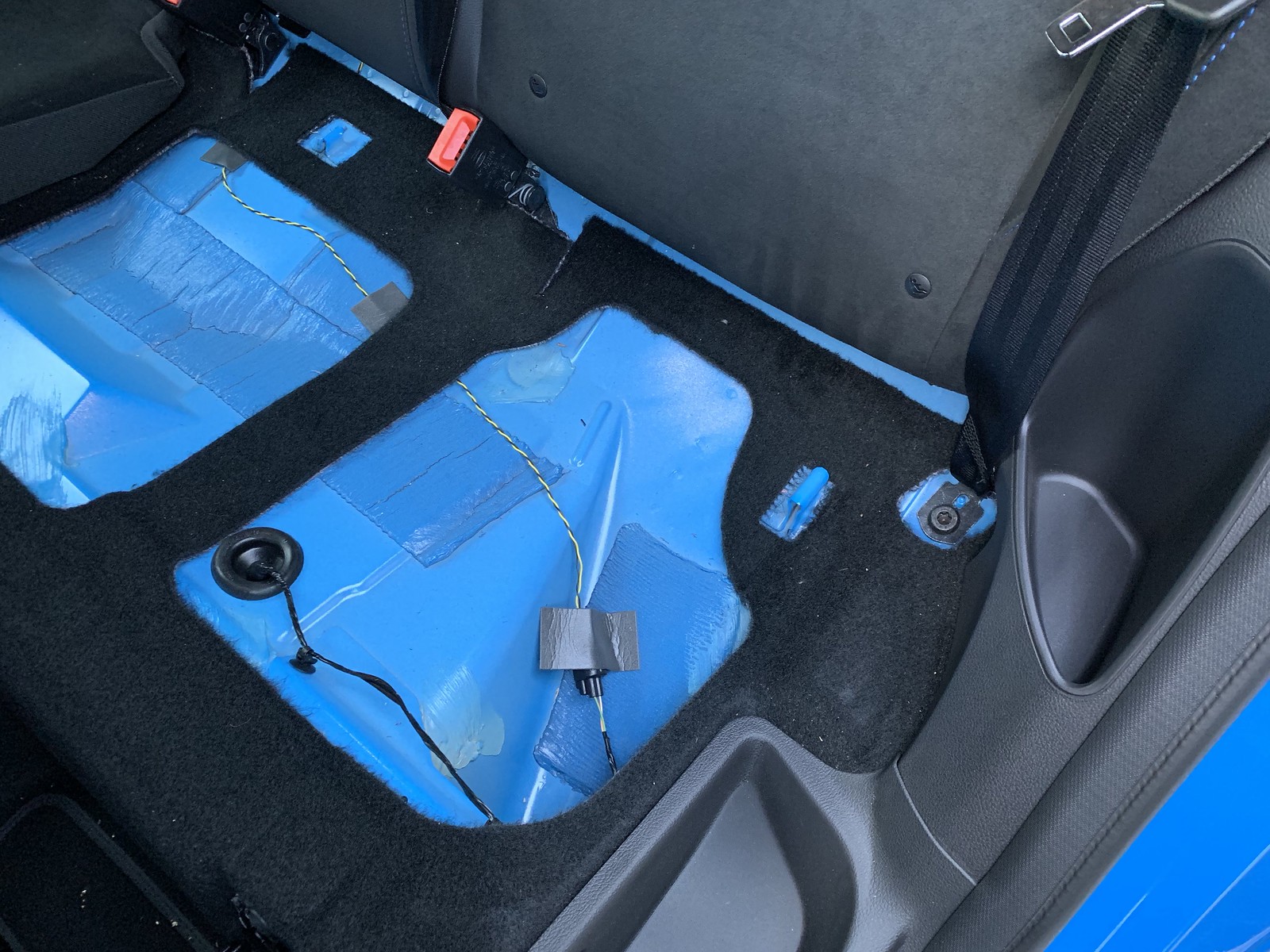 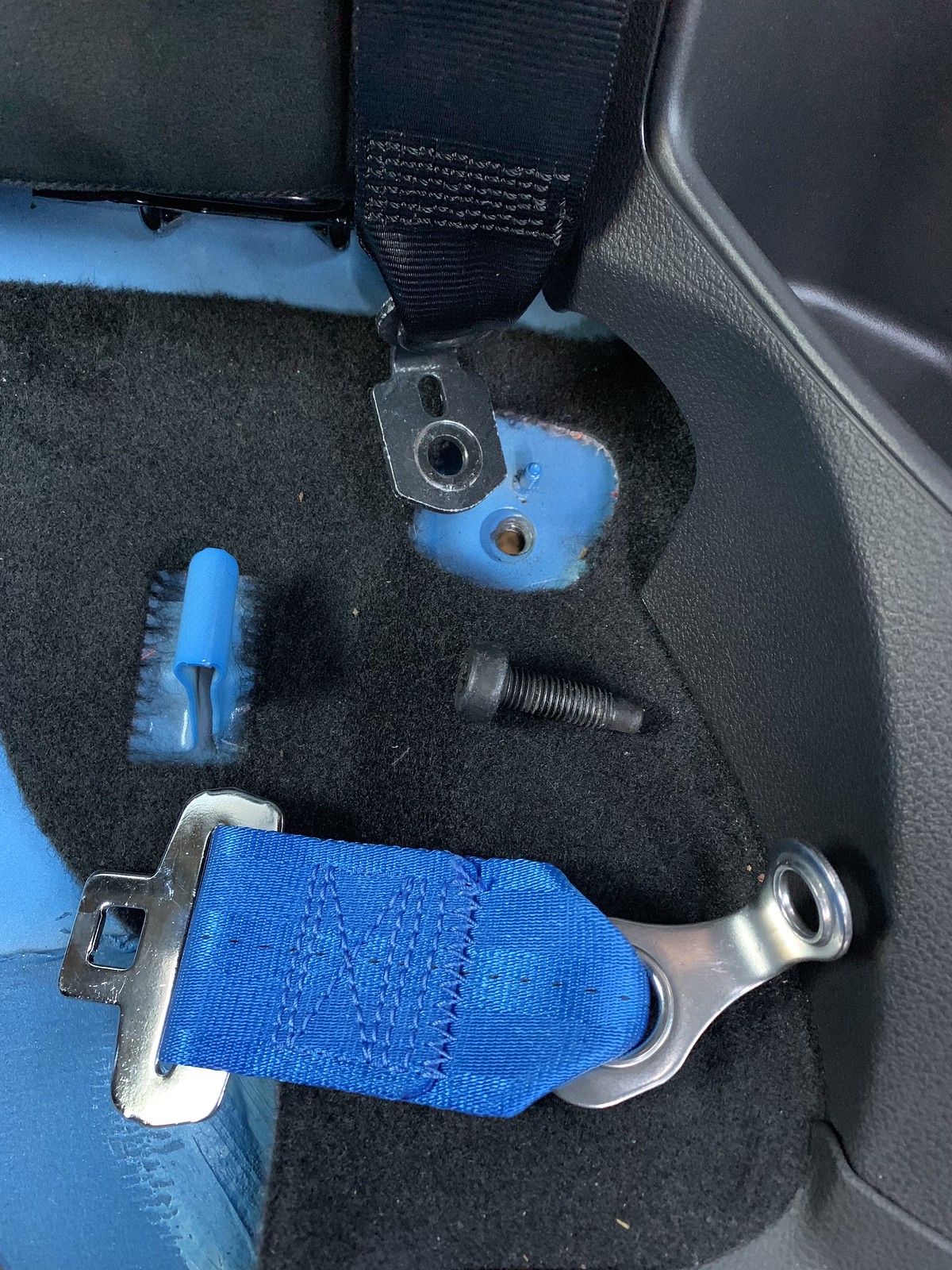 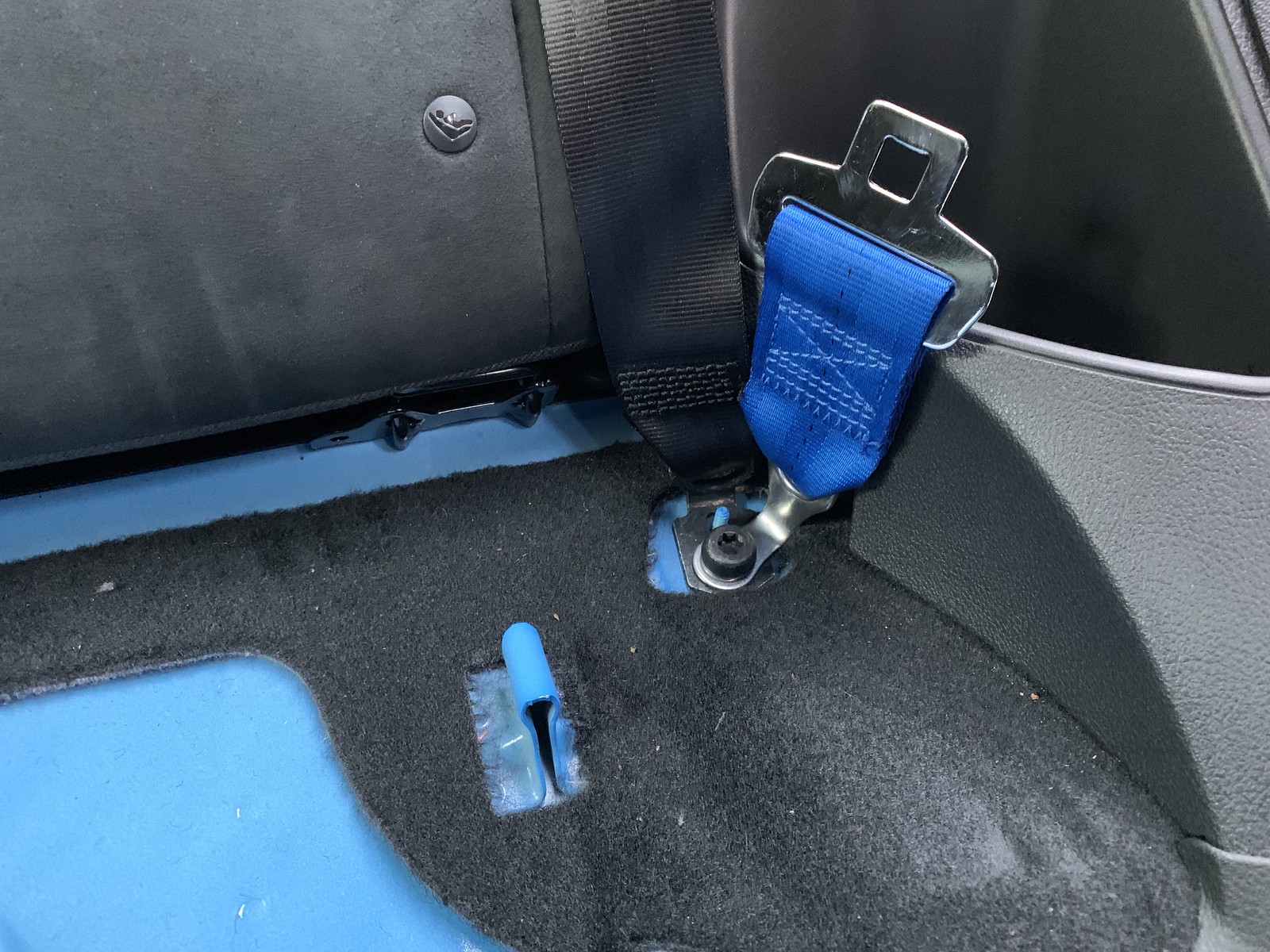 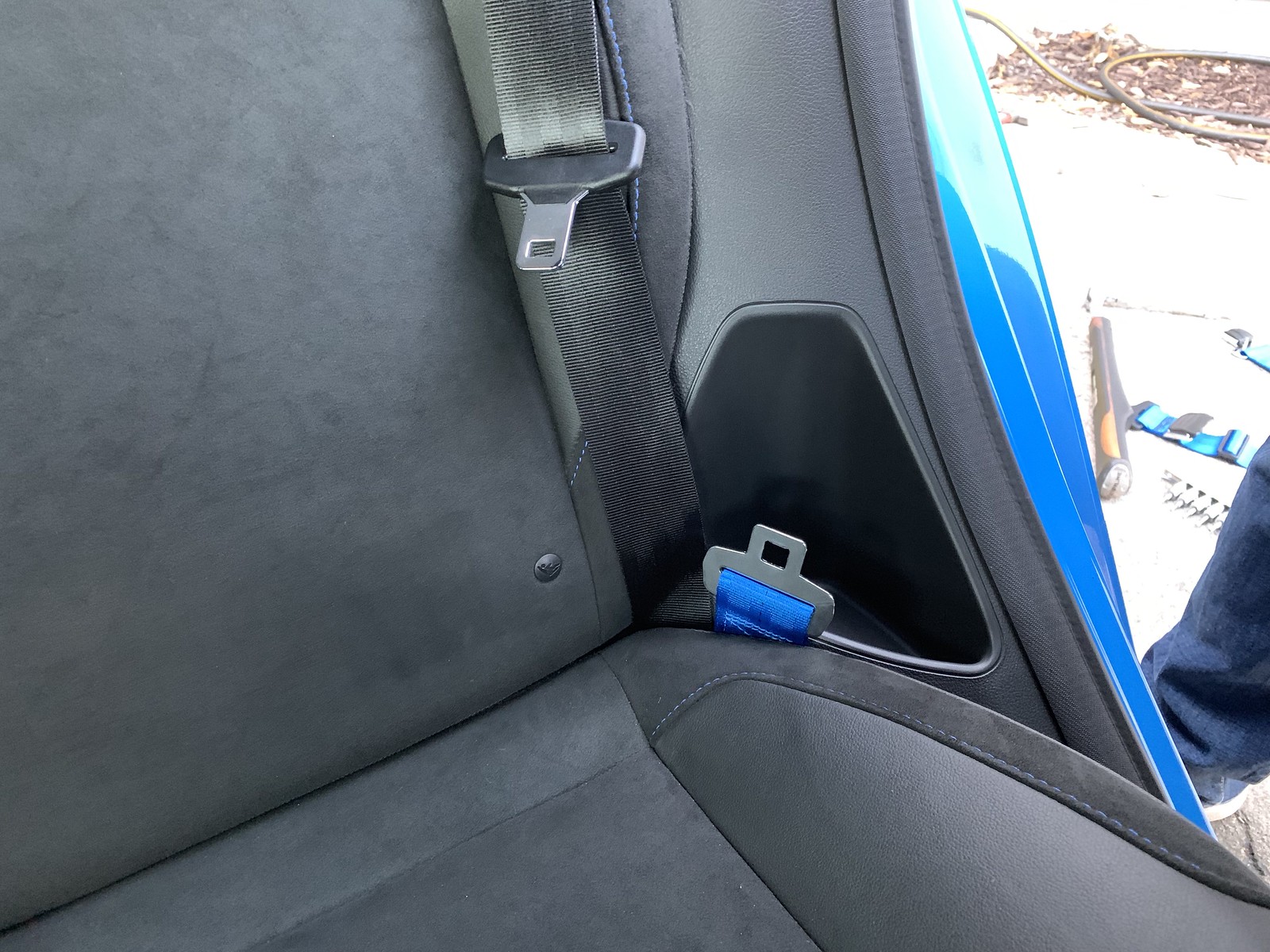 The rear end of the harness can be clipped into this point and the factory seat belt receiver. 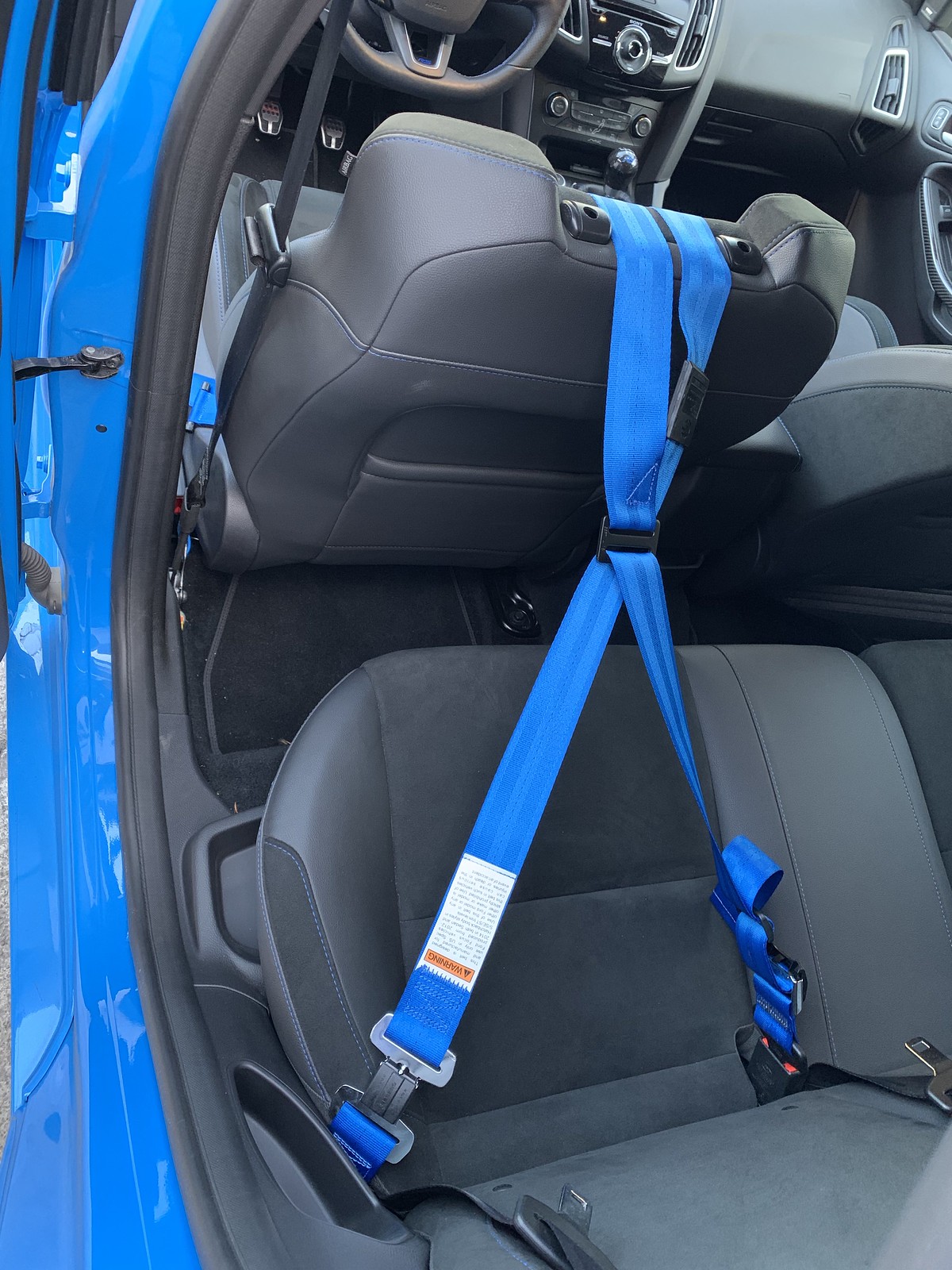 For the front, you do the exact same thing but at the base of the B-pillar. Pop off the plastic cosmetic cover and install the front pigtail. 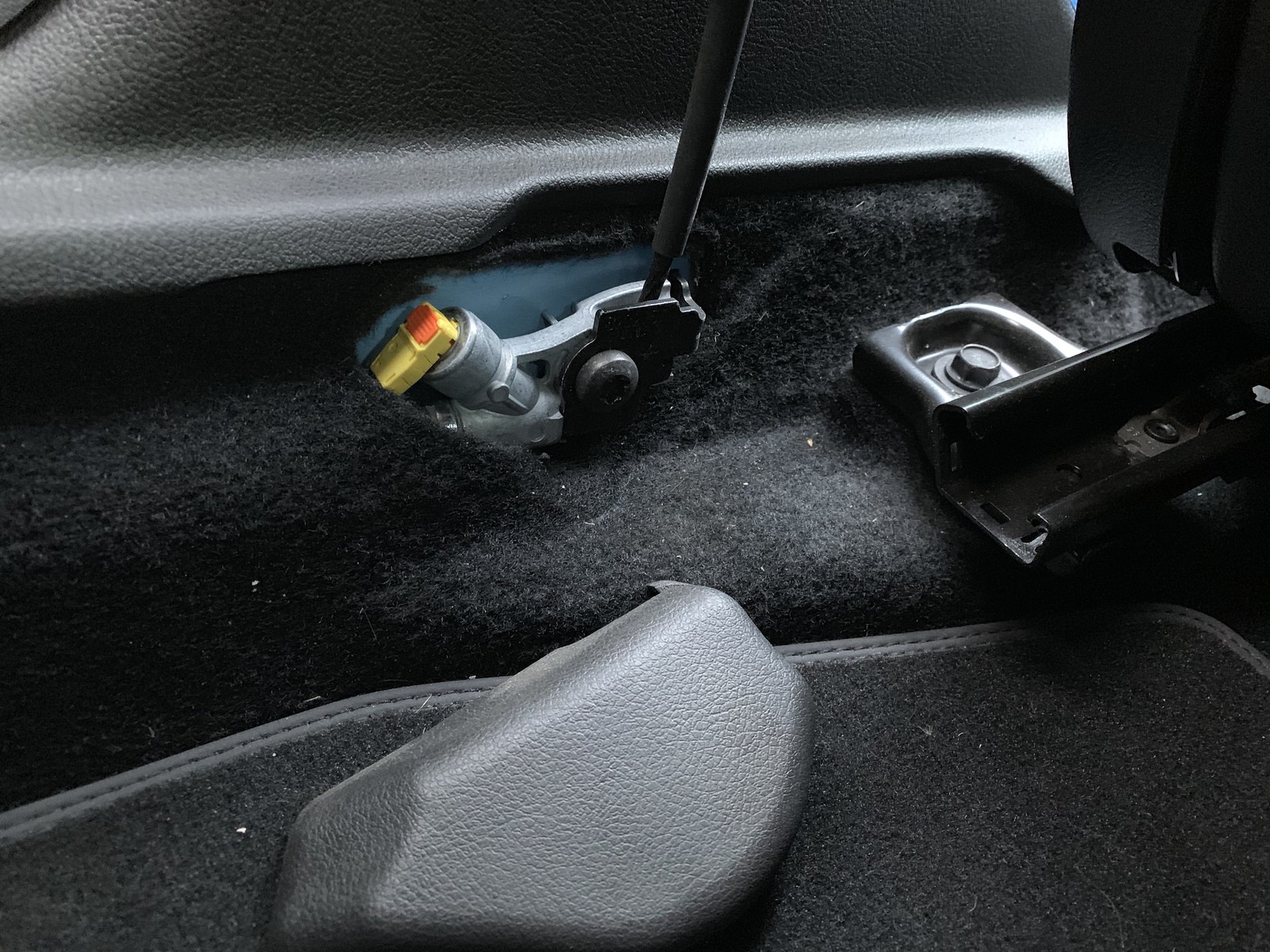 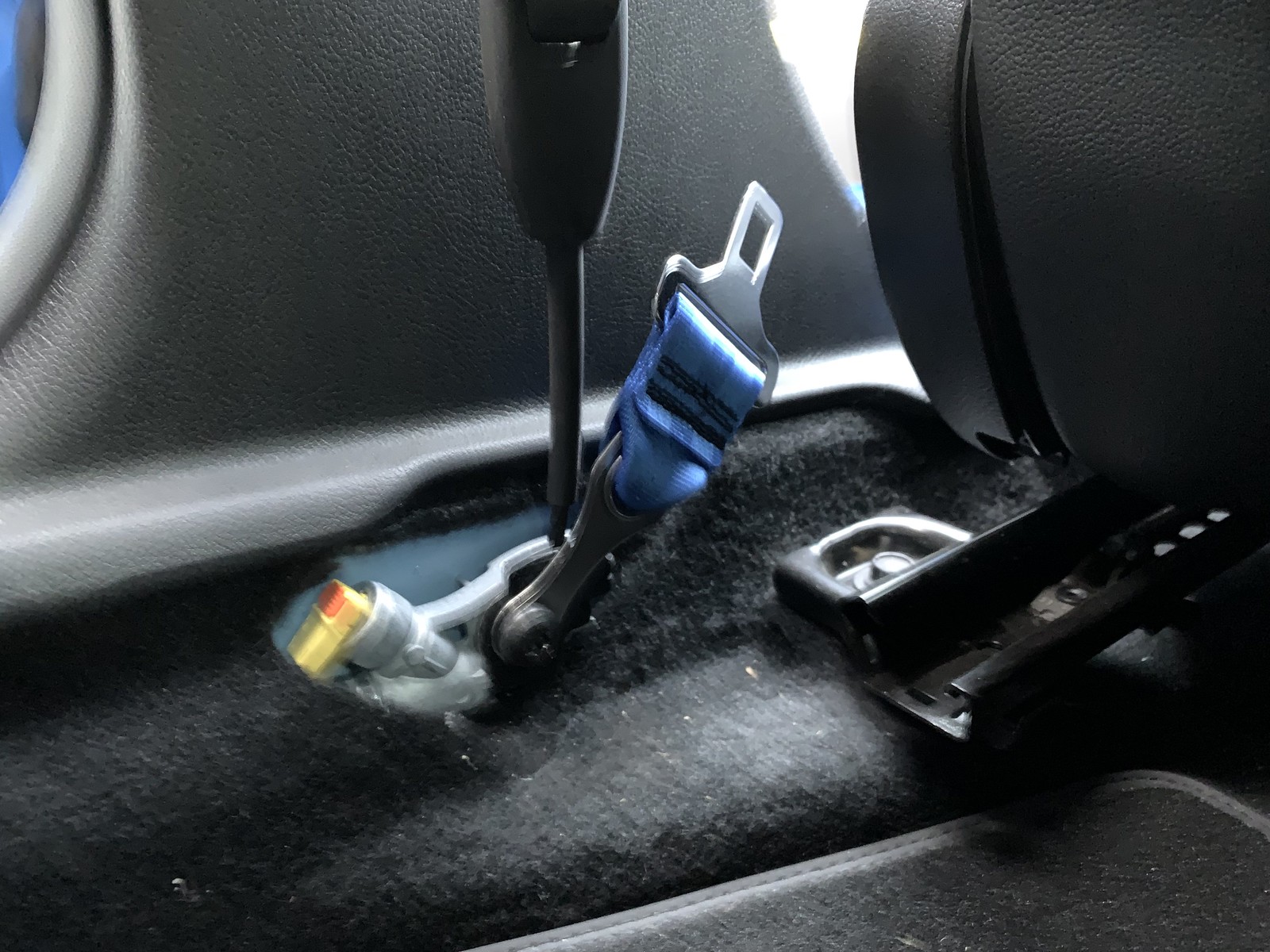 (sorry for the blur)

I found that the buckle of the Schroth harness butts right up against the plastic trim of the seat base, so I put some stick-on rubber pads on it so that I wouldn't have rubbing and scratching when the harness was cinched up. Clip in the front and the harness is fitted. 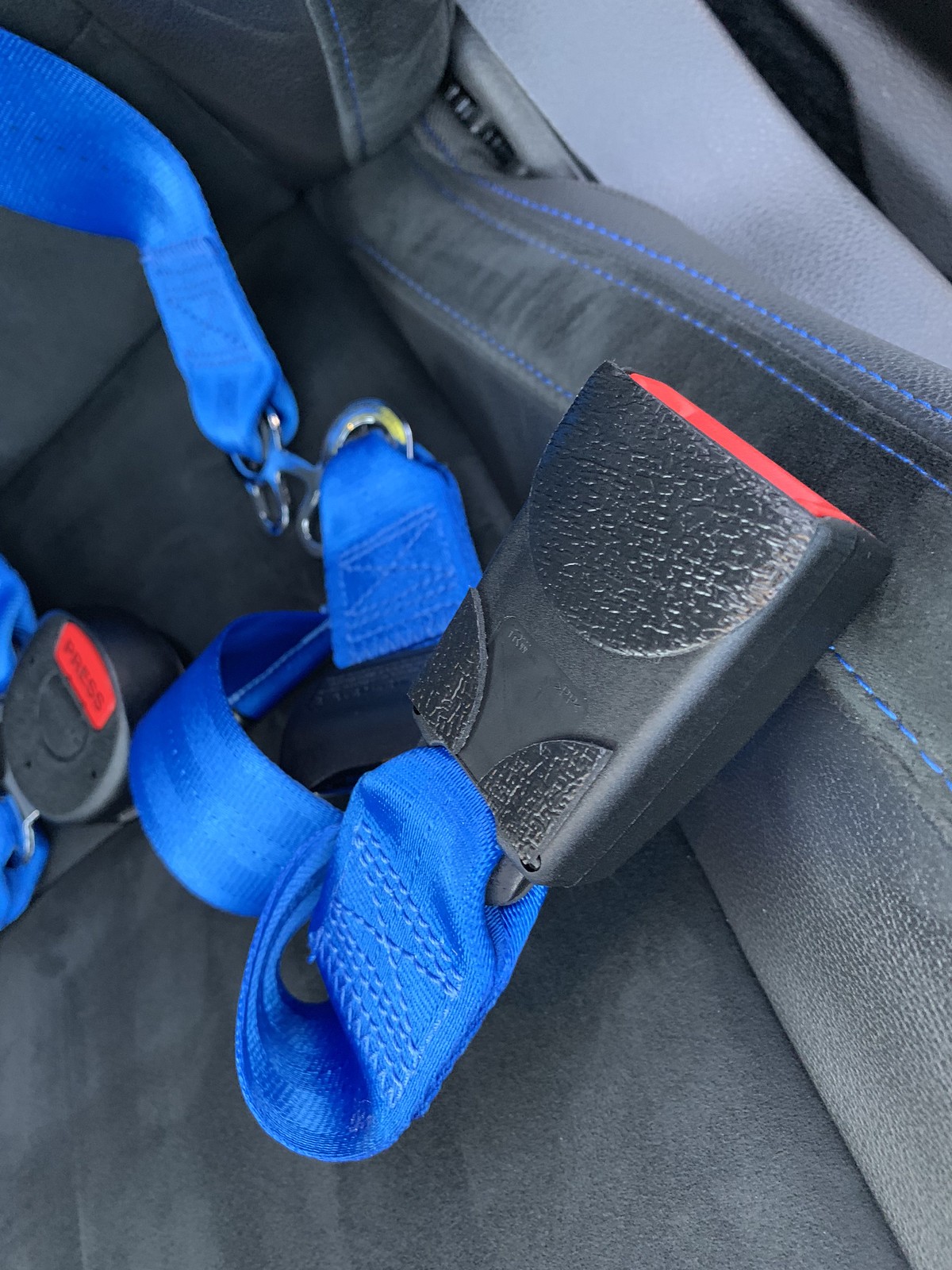 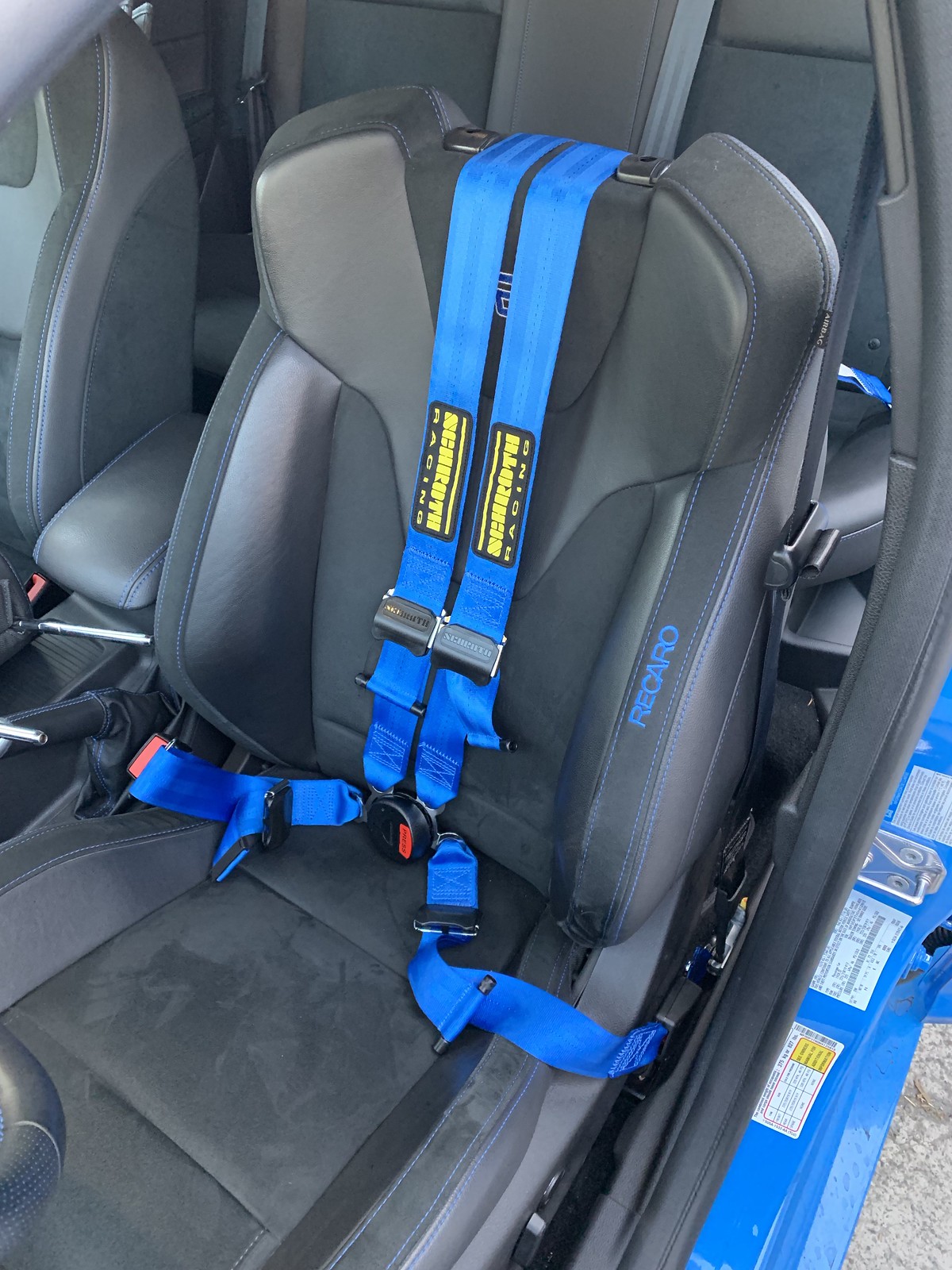 With that done, I replaced the factory brake fluid. Some say that the factory stuff is fine, but a track day at Laguna is expensive and I didn't want to find out on my second lap of the day that the factory fill wasn't up to the task. I signed up for this track day on short notice so I ended up having the job done by Z Car Garage, who works on my Skyline. They installed StopTech STR-600. 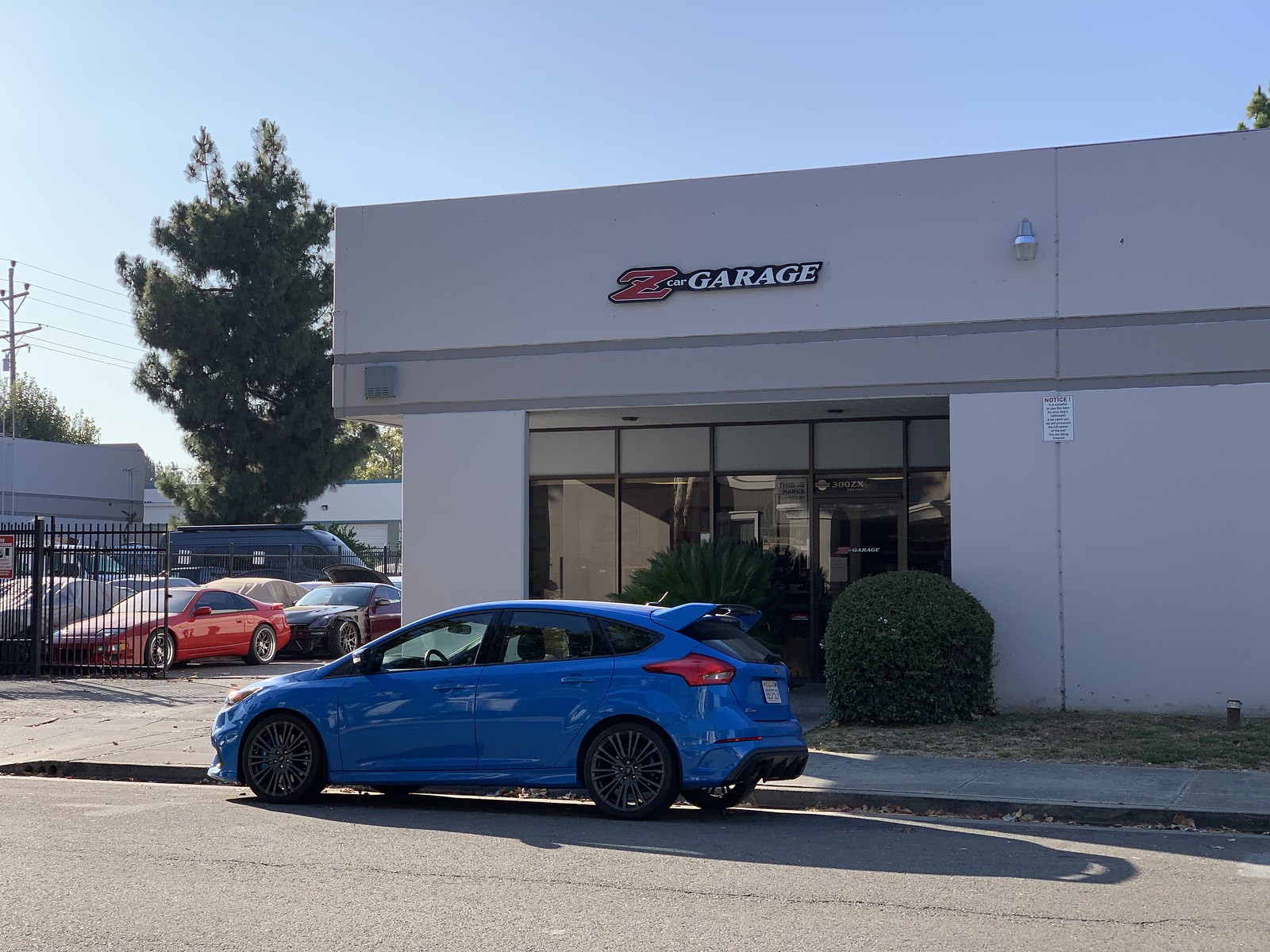 The last thing I did was to purchase track day insurance. I was willing to write off the Miata in the worst case, but I am not ready for that financial hit with my daily driver. Pricing was around $300 for a day at Laguna including $1m liability coverage, closer to $200 without. Track days here have some pretty expensive machinery (see photos) that I thought it was easier to swallow paying $100 to cover myself in case I took a $400k GT2RS into the wall with me when I ran out of talent. So with everything accounted for, it was time to enjoy myself! 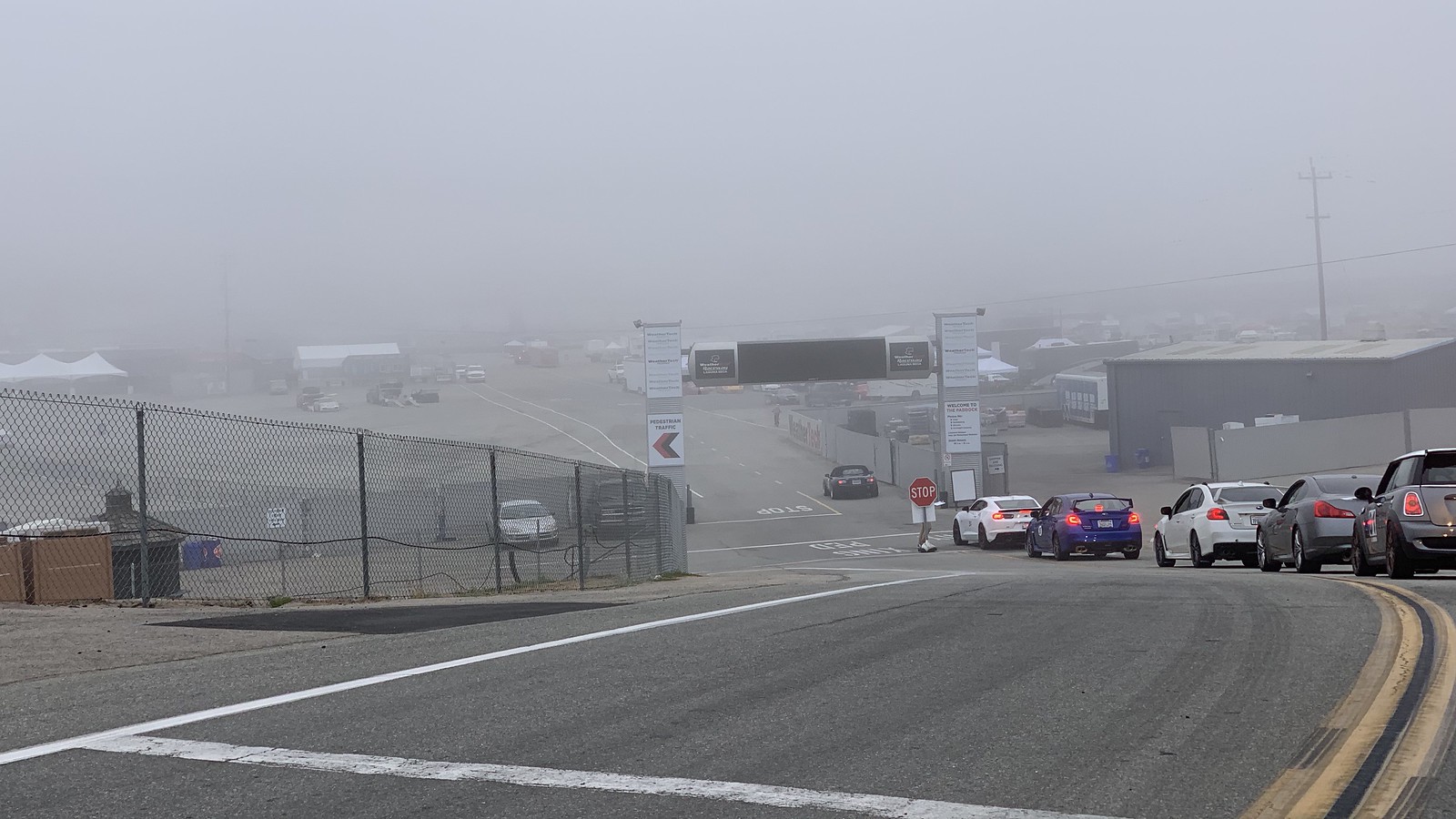 This is how every event at Laguna starts - fog. But by run time, it had burned off and the temperature was on its way to 72F. 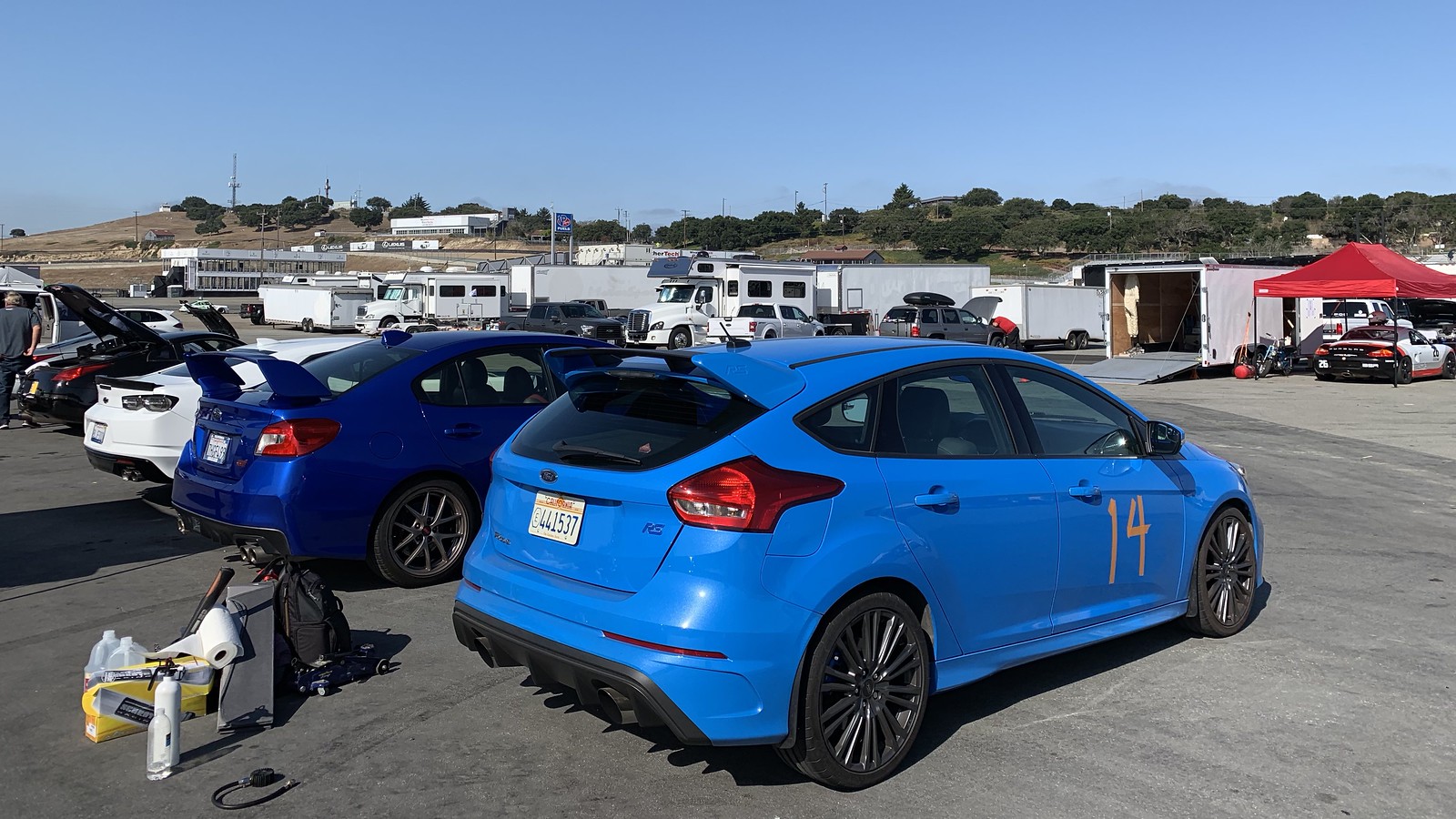 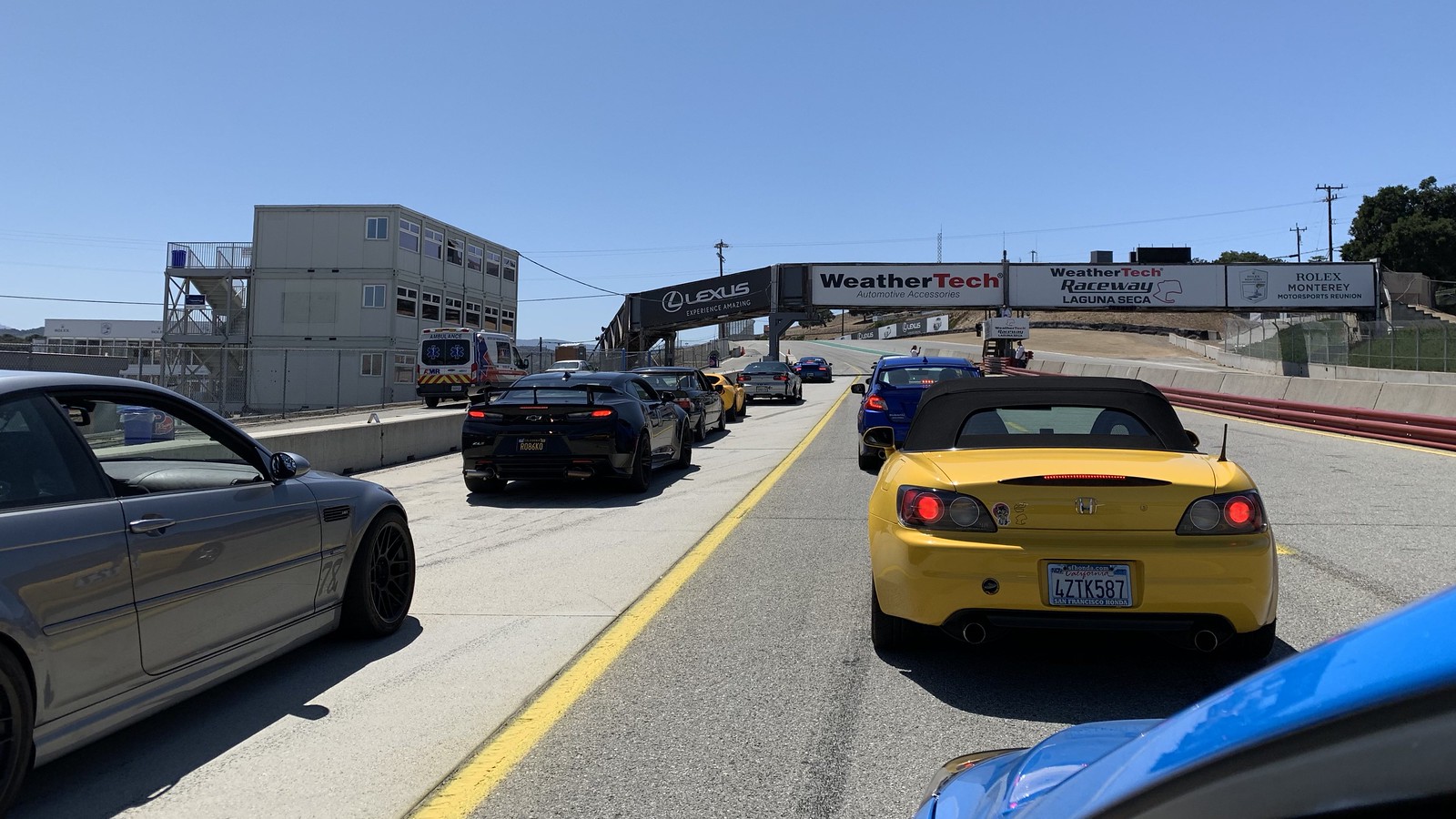 I ran with TrackMasters, and because of low car count I had the opportunity to run 6x 20-minute sessions, sharing space with the advanced drivers in open passing. The sound limit was 92 dB - I don't think I would have had any issue with pure exhaust sound, but I'd be shifting from 3 to 4 right by the sound booth and I didn't want a POP to spike the meter. So, I cruised through turn 5 in 4th gear and I don't really think it hurt me that much on pace. 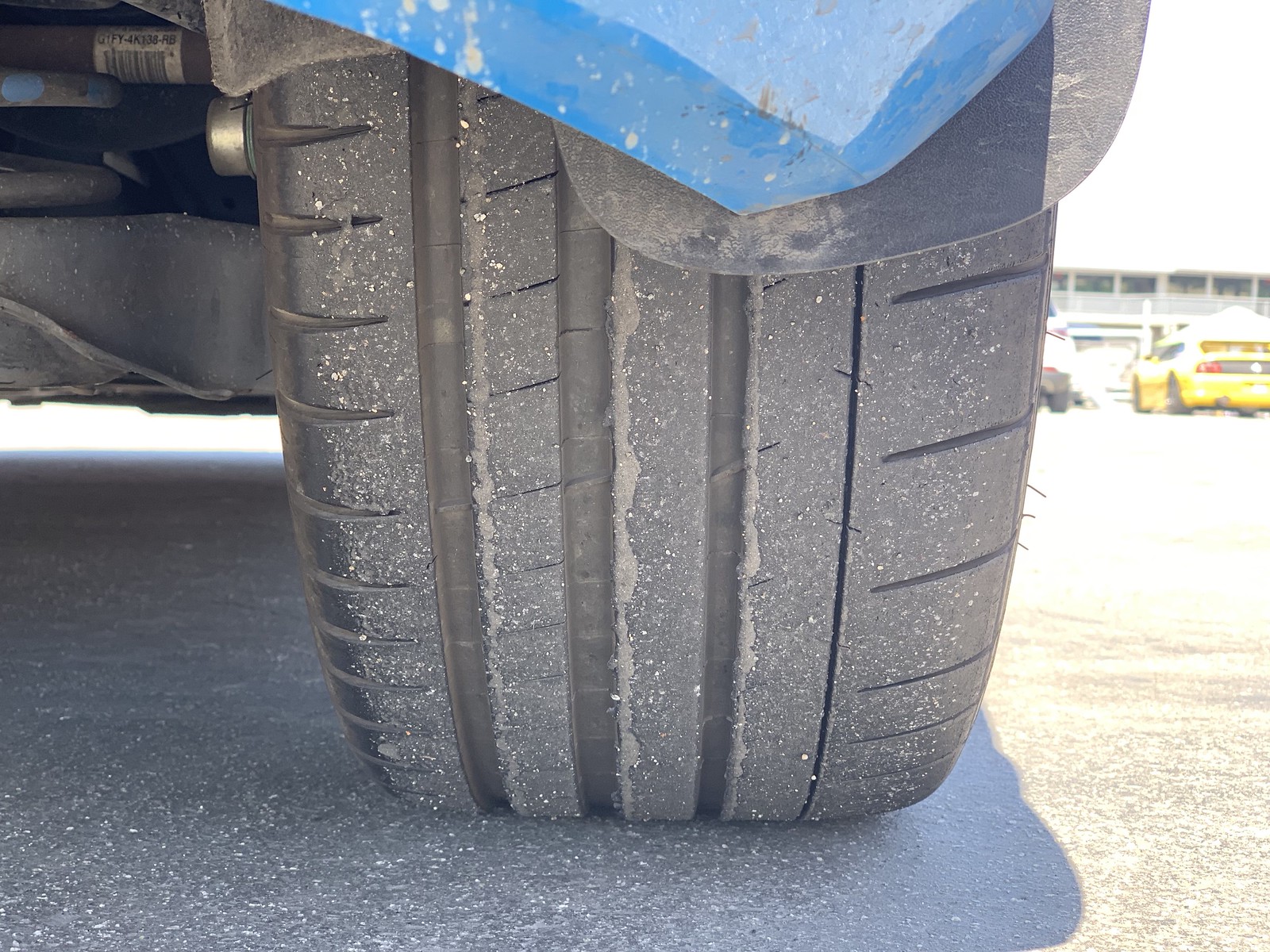 Based on the suggestions of others on the forum, I dropped the tires to 35psi cold all the way around. I found that this correlated to 45psi hot. These are the stock Pilot Super Sports running stock alignment. The wear looked pretty even. I found that the tires offered maximum grip in the first couple laps of the session, and then started to feel quite 'squishy' and lost grip as they got hot. Pulling a number from my butt, it felt like maybe 20% reduction in grip after 15 minutes. The drop-off was gradual and their behavior was the same, but I just couldn't come through the corners as quickly. After cooling off, the tires were back to their higher grip level for the first couple of laps before the whole routine repeated. 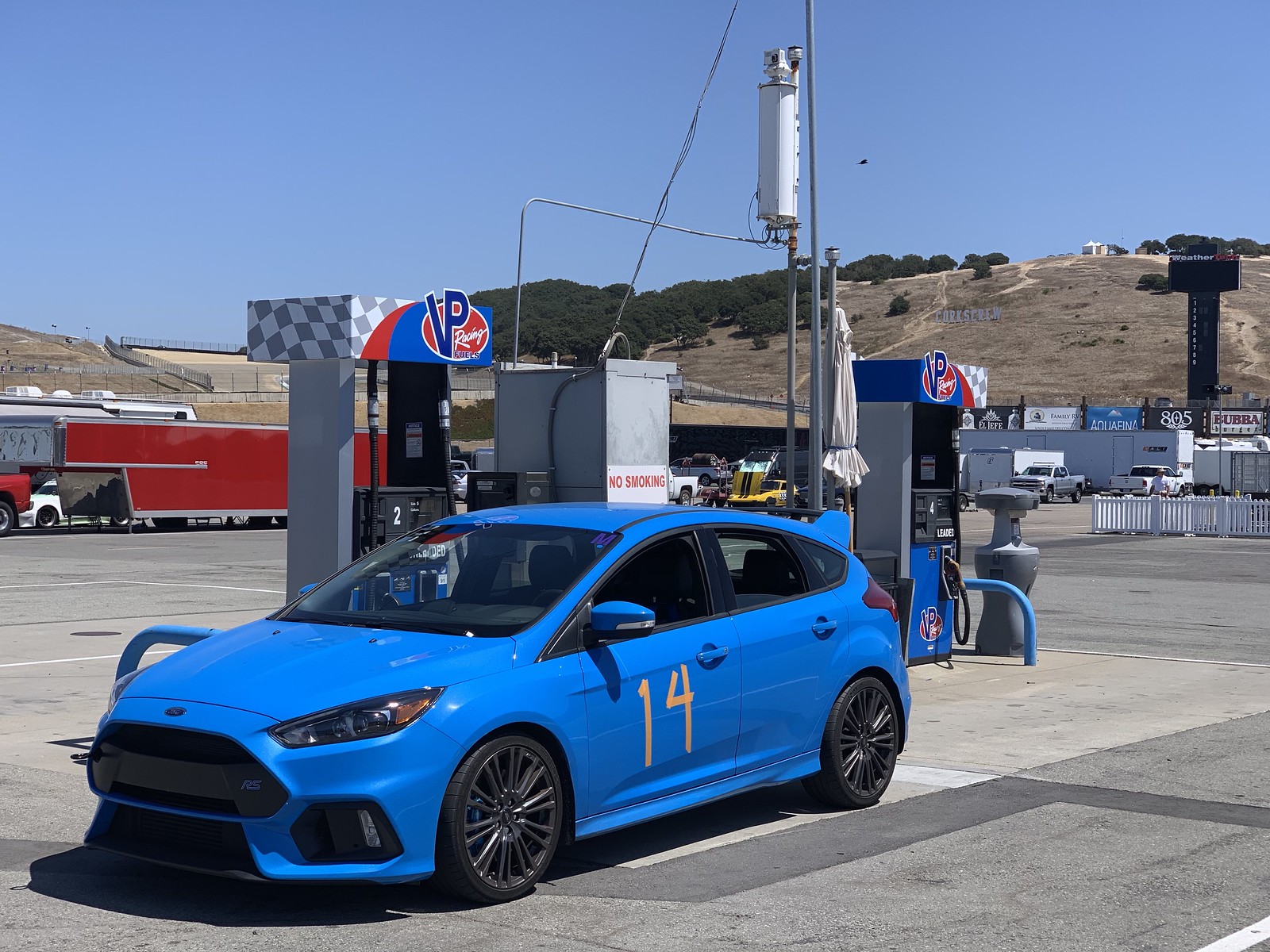 The car was fantastic to drive. It felt just how I remembered it from the Adrenaline academy - tons of grip and a very high level of confidence for me behind the wheel. By lap 3 of the first session my jitters were gone - the car communicated well and we were going to have a good day. The harness worked so well that it was basically invisible, I just stayed planted and was able to focus on braking as hard as possible without bracing myself against the door, steering wheel, or console. It's obviously very difficult to make meaningful comparisons at amateur track days but I was able to punch a couple of classes above my weight class, harassing everything this side of a GT3. I received some comments from other drivers - they were seriously impressed by the pace of the Focus. No surprise to us owners! 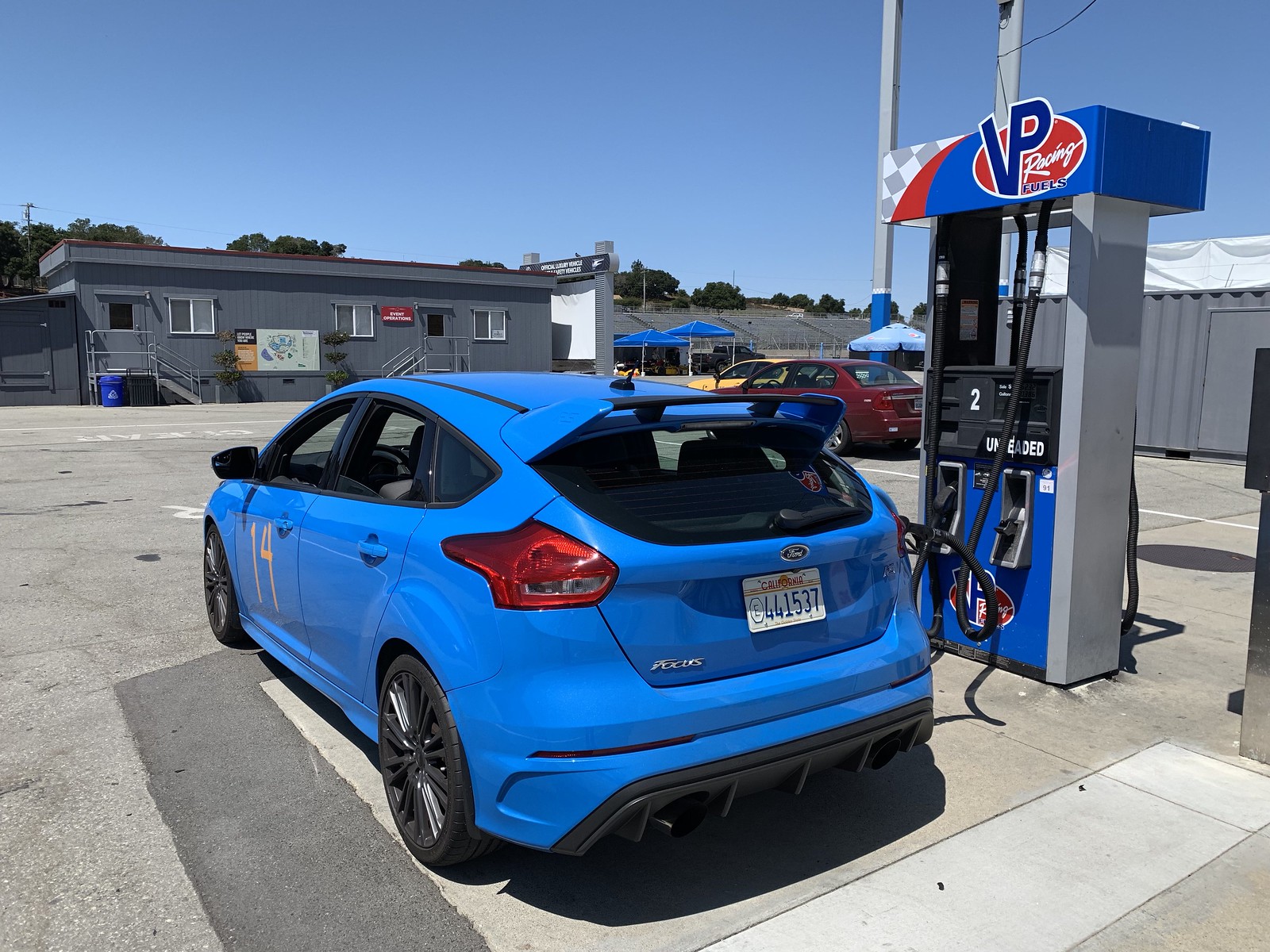 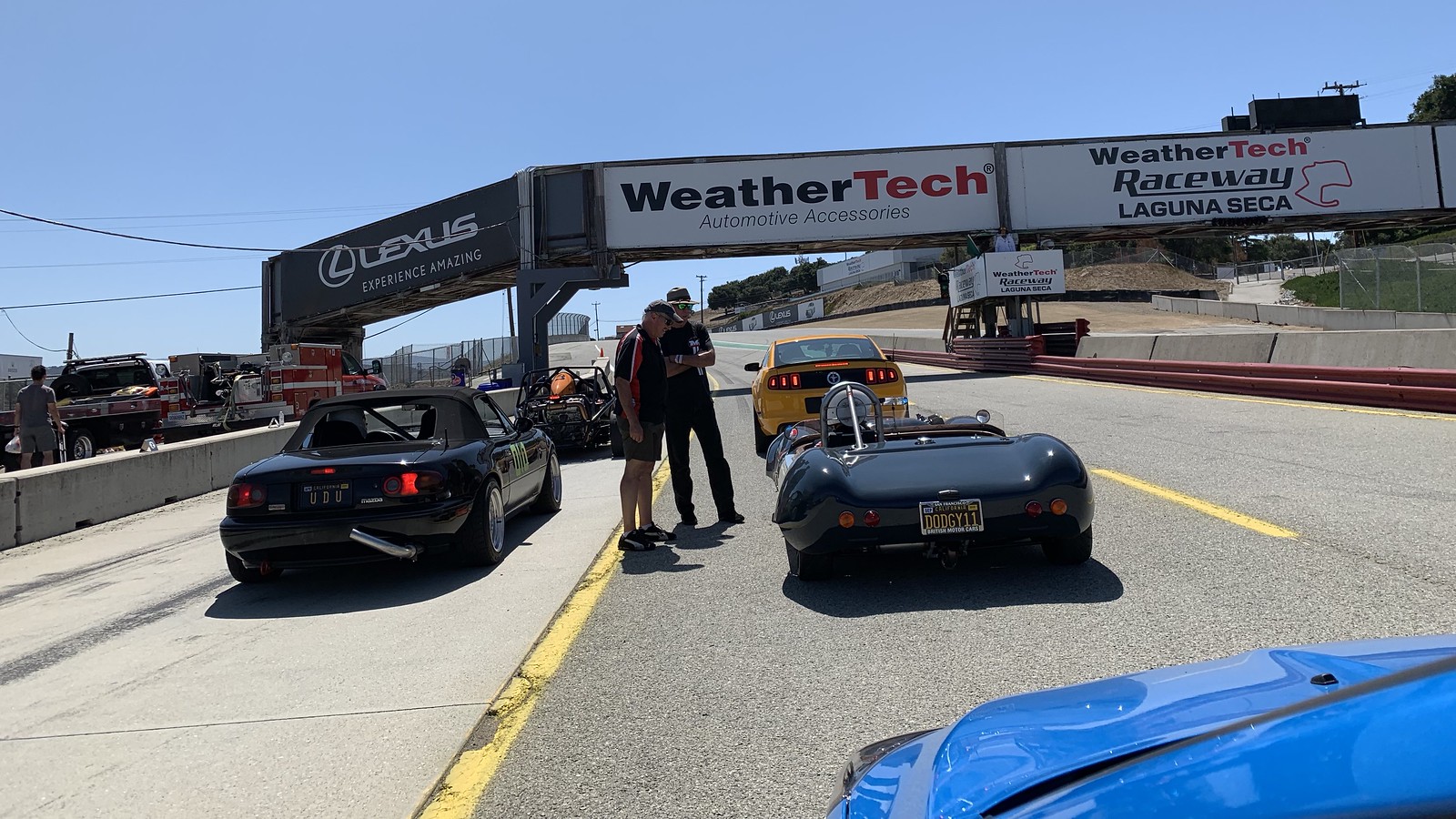 The Bay Area doesn't mess around when it comes to track days. On this day, a blue Ford hot hatch was quicker than a Lotus 11. That GT2RS ended one of the sessions beached in the sand off turn 9. 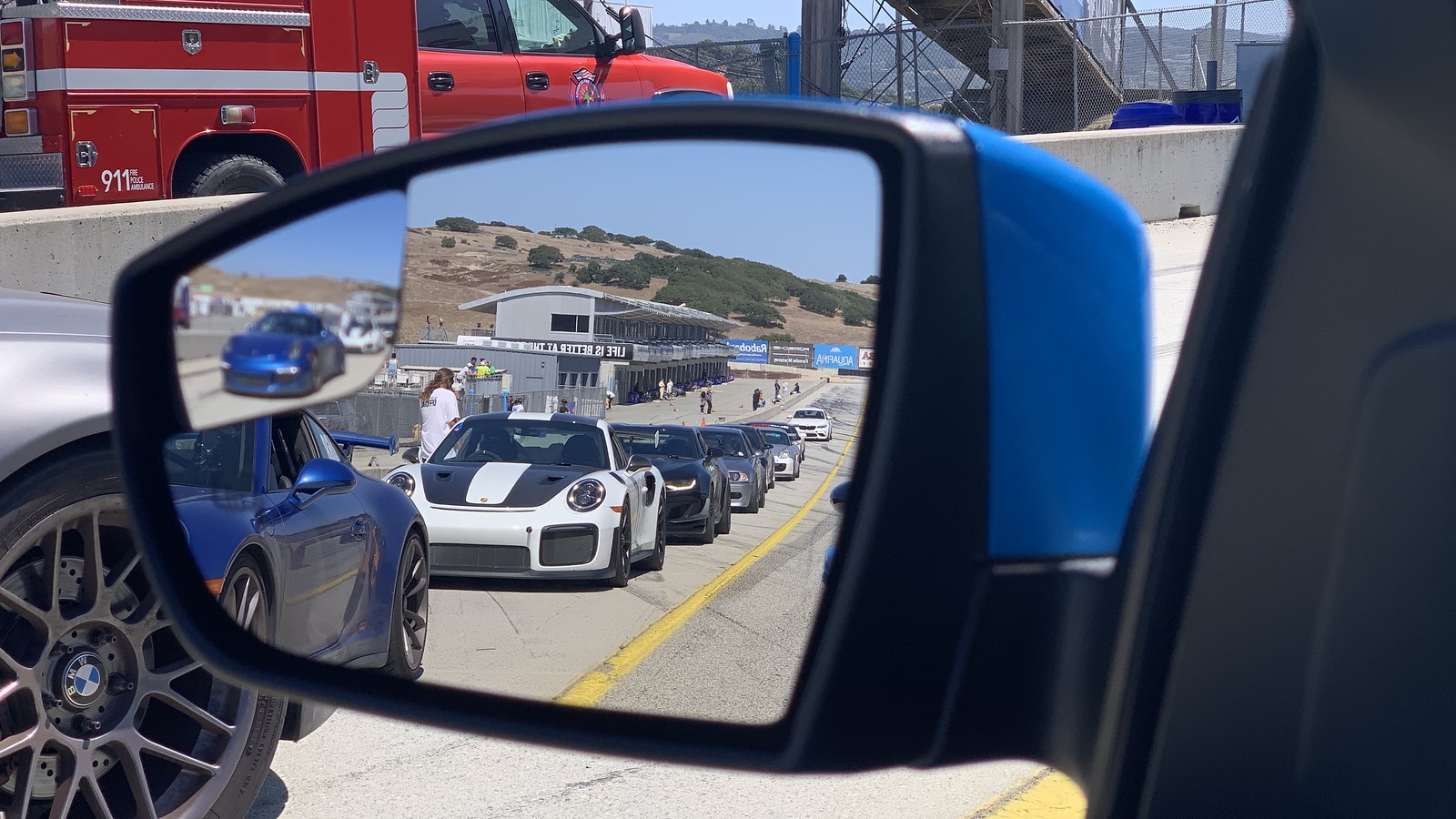 Unsurprisingly, the pinch points for the stock setup seemed to be temperatures. Coolant was right in the middle of the gauge all day, but oil temperature read 3/4 steady through my sessions. I didn't get any lights in the cluster or discern any change in behavior so I plowed on without issues all day. The brake pedal, which felt fairly firm on the road with the new fluid (about the same as stock), softened up almost immediately in the first session and has not reverted even a day later. The stopping power was still there, but the pedal feel was pretty mushy. I need to do some reading and see if that can be improved with some different pads or a re-bleed.

I ran the whole day in Sport mode. I felt traction control intervene only when I overcooked a corner and simply asked too much (plowing into Turn 2 way too late on the brakes, while also attempting to dial in a healthy dose of steering, while also trying to jump back on the power). I also felt it a couple of times through the corkscrew, when I was cranking it pretty hard to the right and the front tires were unloading over the crest.

I am going to return in October for another day at Laguna Seca. I am extremely impressed with the performance of this essentially stock car! I'll do some homework and see what I can do about the brakes, and then from there it would be cool to have some more tire, and then maybe some more cooling, and some more power, and and and... 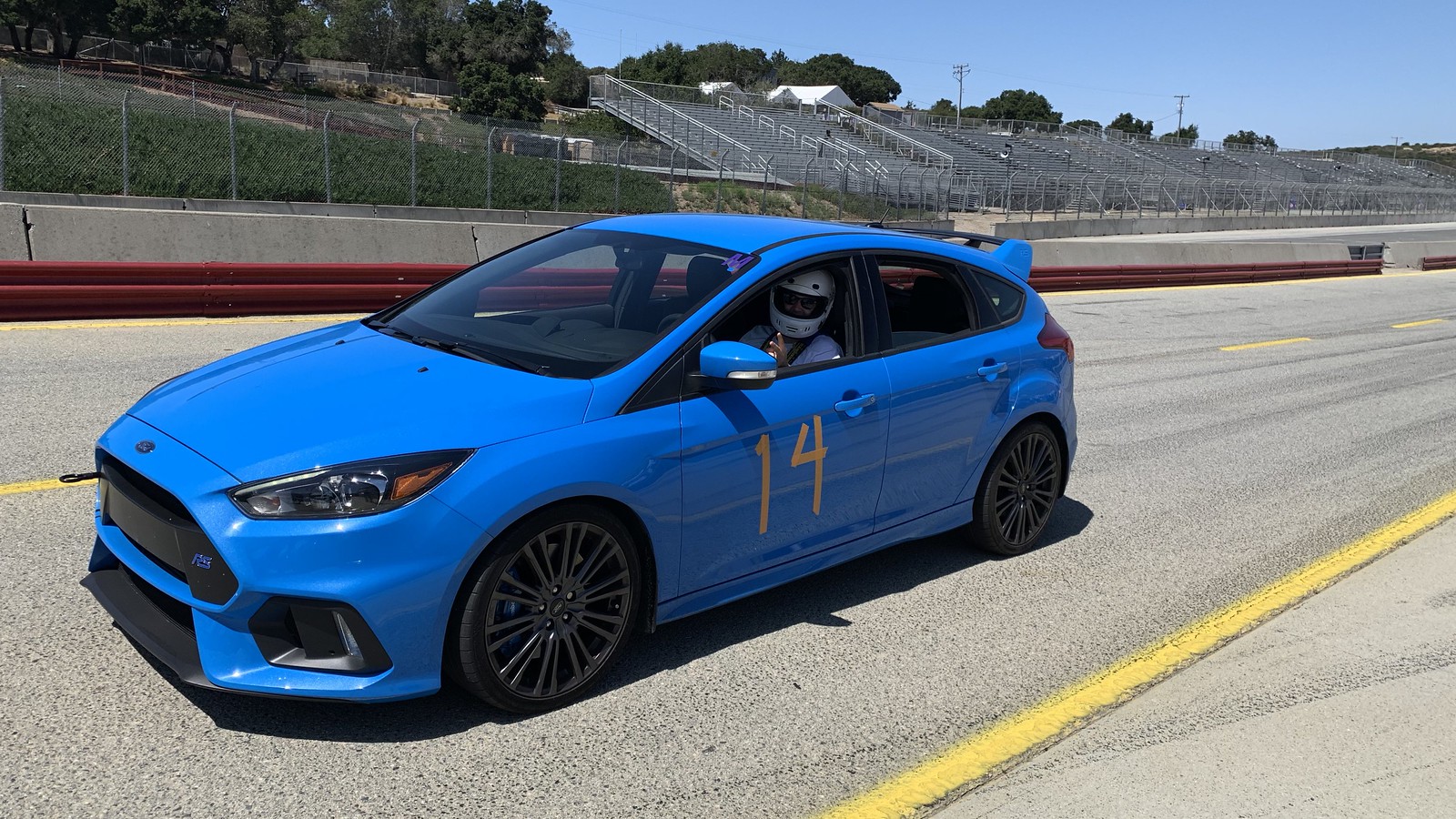