I was thinking earlier this month about my automotive plans for the year, what events I am looking forward to, what I want to do with my cars. I got to reminiscing about experiences at driving schools and track events with professional instruction. I haven't written about it here as of now - hopefully I add it some time soon - but back in 2018 I did a two-day stint at Ford's driving school in Utah, which was a perk included by Ford in the purchase price of my RS. You can read about it here if you like:

In 2020, when I was down in South Carolina with my folks for BMW's Foundation Fest, we visited the BMW Performance Center East and did some autocross in their cars. I wrote that up for the blog:

If there's one thing more fun than driving your car around a track, it's driving someone else's car around a track, and letting that someone else worry about wear and tear, tires, brakes, maintenance, insurance. So with that in mind, I started looking at course offerings at BMW's Performance Center West, located just east of Palm Springs in Southern California. Proper driving schools are expensive, so I hemmed and hawed a bit and moved it to the back of my mind. A couple of weeks ago I found myself at there right place at the right time - namely Facebook, on a Tuesday night - when a spot opened up for the one-day M School on January 16th.

The Golden Gate chapter of the BMW CCA organized a special event at the school at a discounted rate, and sold out all 32 spots immediately in October. I was able to pick up one of those spots when a gentleman had to cancel on short notice. The price was not even half the normal price of the program - a total no-brainer. With the Monday a work holiday for MLK day, I had just enough scope to drive down Saturday, do the school Sunday, and then bomb home on Monday.

Immediately I began scheming... road trip! I love road trips. You may have noticed.

My wife had plans to camp with some friends for the weekend, so it was going to be a solo affair. Two big questions: what route and which car?
Route first. If you are an astute reader you may be saying to yourself, "hey, didn't this guy already do a road trip to Palm Springs in his Focus?" Well yes, I did exactly that in 2020 with my wife. Here's the write-up with details on the route we took.
I did a good job capturing it in that post so I won't re-hash, but I have pledged never to take I-5 if I can avoid it. For LA-SF journeys I default to the 101, which is not as fast but offers more variety and quality-of-life things, such as turns. Without a passenger, and with the whole day to make the trip, I decided to look off the beaten path and forge ahead with some completely new roads. I had to meet a friend in LA for dinner, and I had to get to the hotel in Palm Springs at a decent hour to get some rest, otherwise no constraints. After consulting with some experienced CA-driving friends I built out the following route: 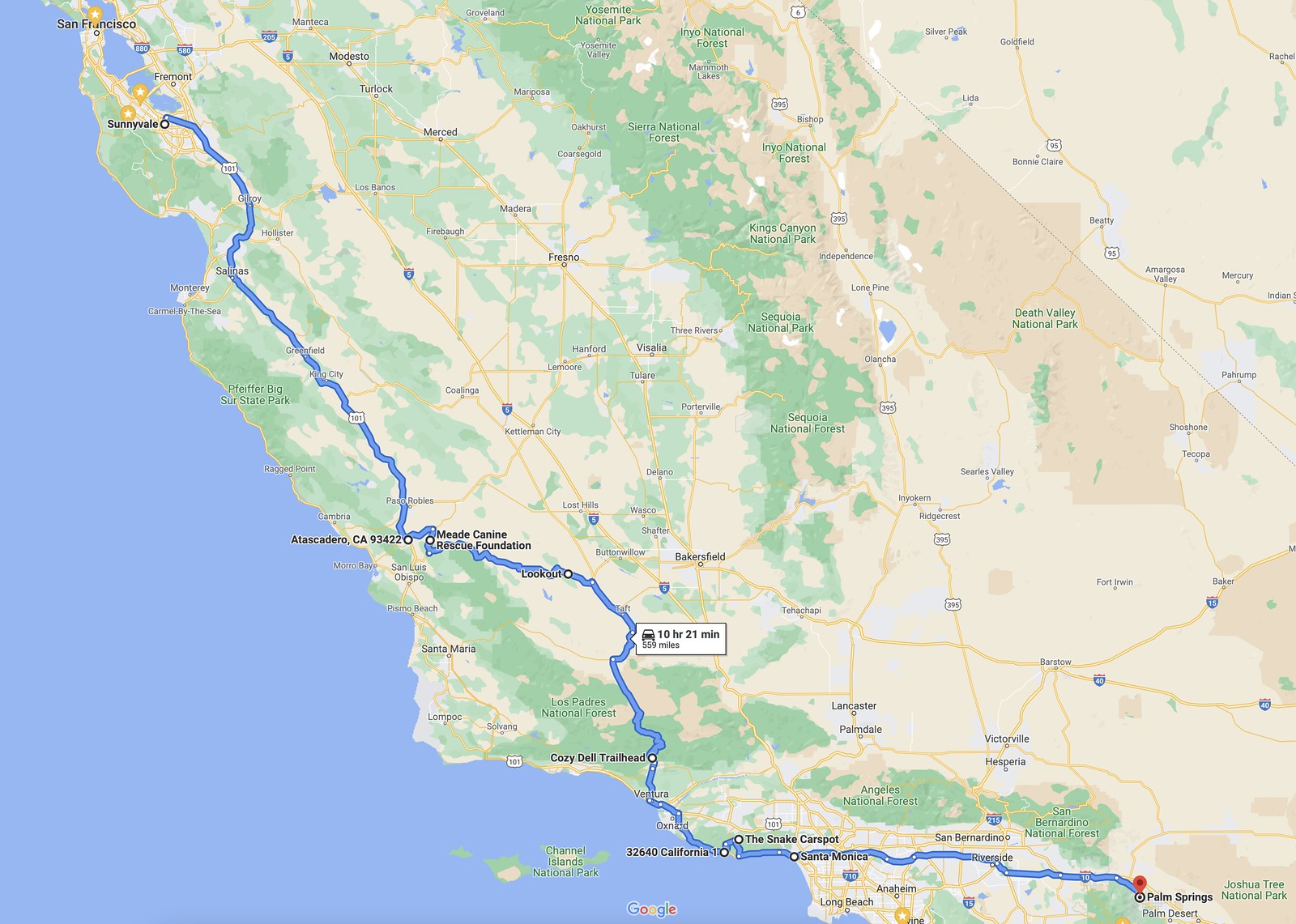 Google maps link: https://goo.gl/maps/b2enJJNyuwsKZNDE7
Some things I kept in mind while planning this route:
With the route defined, it was time to choose a car. The M3 was out of commission due to a disagreement with the SMOG test equipment. Initially I had my heart set on taking the Skyline on this epic adventure, but when my brain got involved it started to make less sense, considering the reasons listed above. The GTR is extremely robust, and while I don't expect it to break down, there is a difference between needing repair on a 2017 Ford Focus and a JDM import when you're in the middle of nowhere, central CA. The Ford also has cruise control, Apple CarPlay, and a more compliant ride than the GTR. I was planning to visit a lot of twisties but there was also about 5 hours of highway grinding on the agenda and the Focus is superior on that front. Not to mention, the RS is no slouch on a canyon road. So the RS got the nod again.
Sebastiaan was nice enough to dump donate the portable compressor and tire repair kit that he'd purchased for our GT350 trip. I stuck that in the trunk, along with everything required to jack up a corner of the car and remove a wheel, including my big LED light if I was going to be in the dark. I have a AAA membership (the cheap one, I should really upgrade to the 100 mile tow radius) and I hoped that, barring a catastrophic sidewall incident, I could patch a tire on the side of the road enough to get to a proper repair shop. Of course this all follows the same rules as umbrella theory - if you bring it, you won't need it. But you know what would've happened if I'd left it at home in the garage.
Anyway, on to the actual trip! 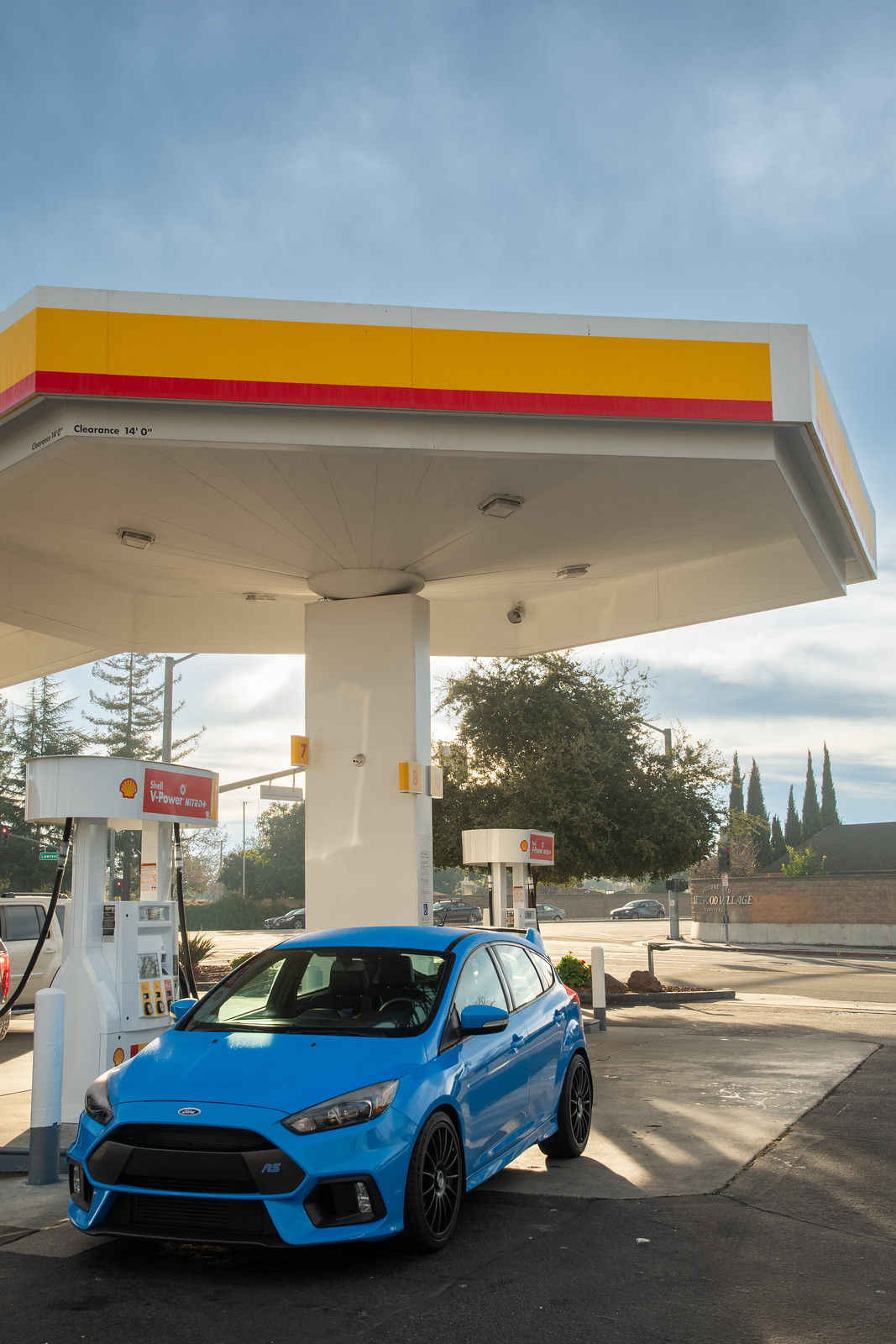 Fueling up near home. I hit the road at 9a after the mandatory Chick-fil-A chicken biscuit breakfast. As designed, the 101 stretch was easy goings with very light traffic, an audiobook, and cruise control. The weather became overcast and cool as I left Atascadero and onto the first of the new roads. The 41-229 combination was a winner! 229 is a quiet road that gets small on its southern end, where the centerline disappears and it becomes a roller coaster with cambered cut-backs one after another. 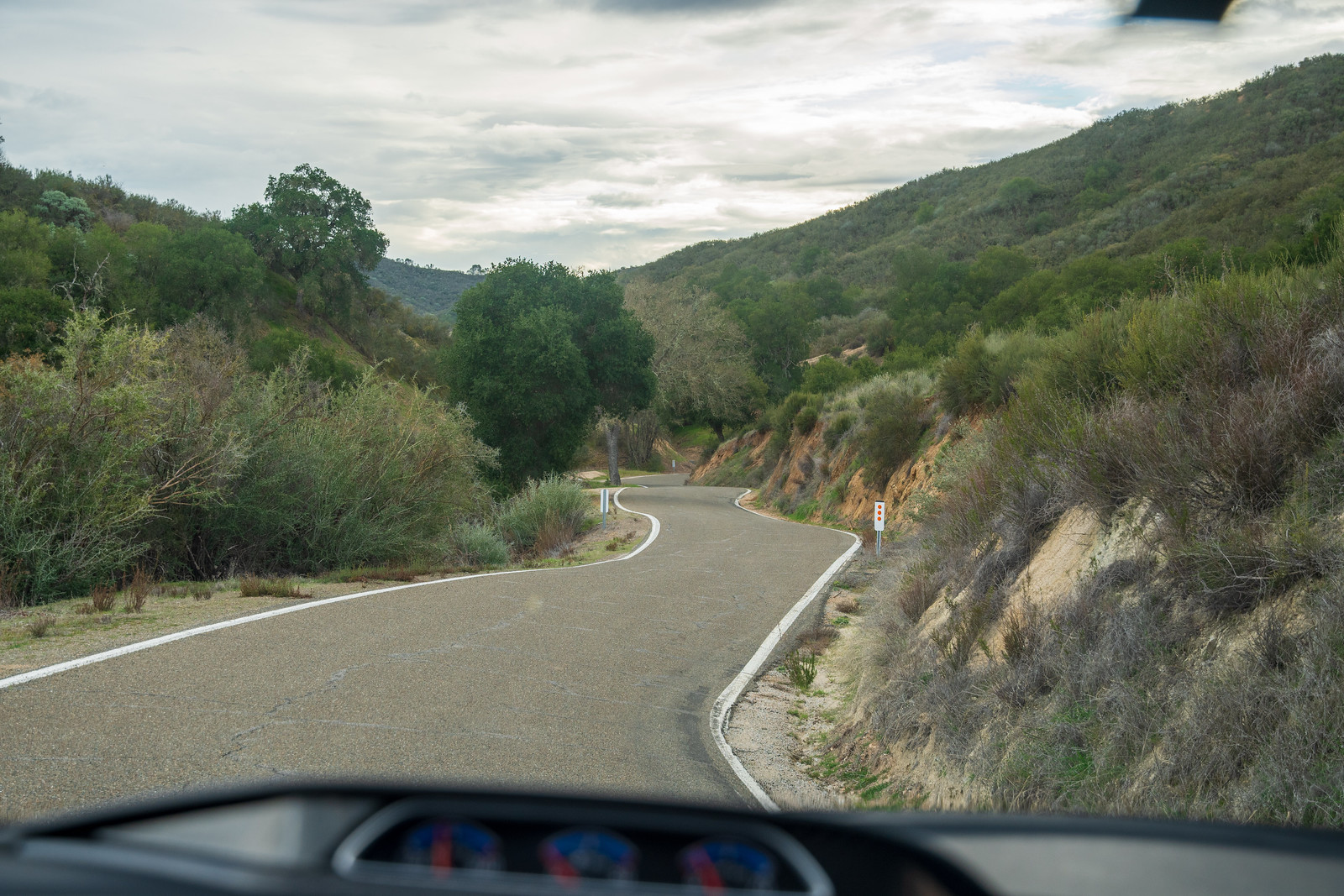 Somehow I didn't take a single photo of CA58 on the way out - sorry. I took a ton on the return trip to make up for it. This road was amazing. 65 miles of smooth, fast, flowing pavement through hills, valleys, wide-open expanses, solar panel farms, all culminating with an incredible canyon sequence on the east end. Love at first drive! No one out there, easy to cruise at highway speeds through the rolling landscape. 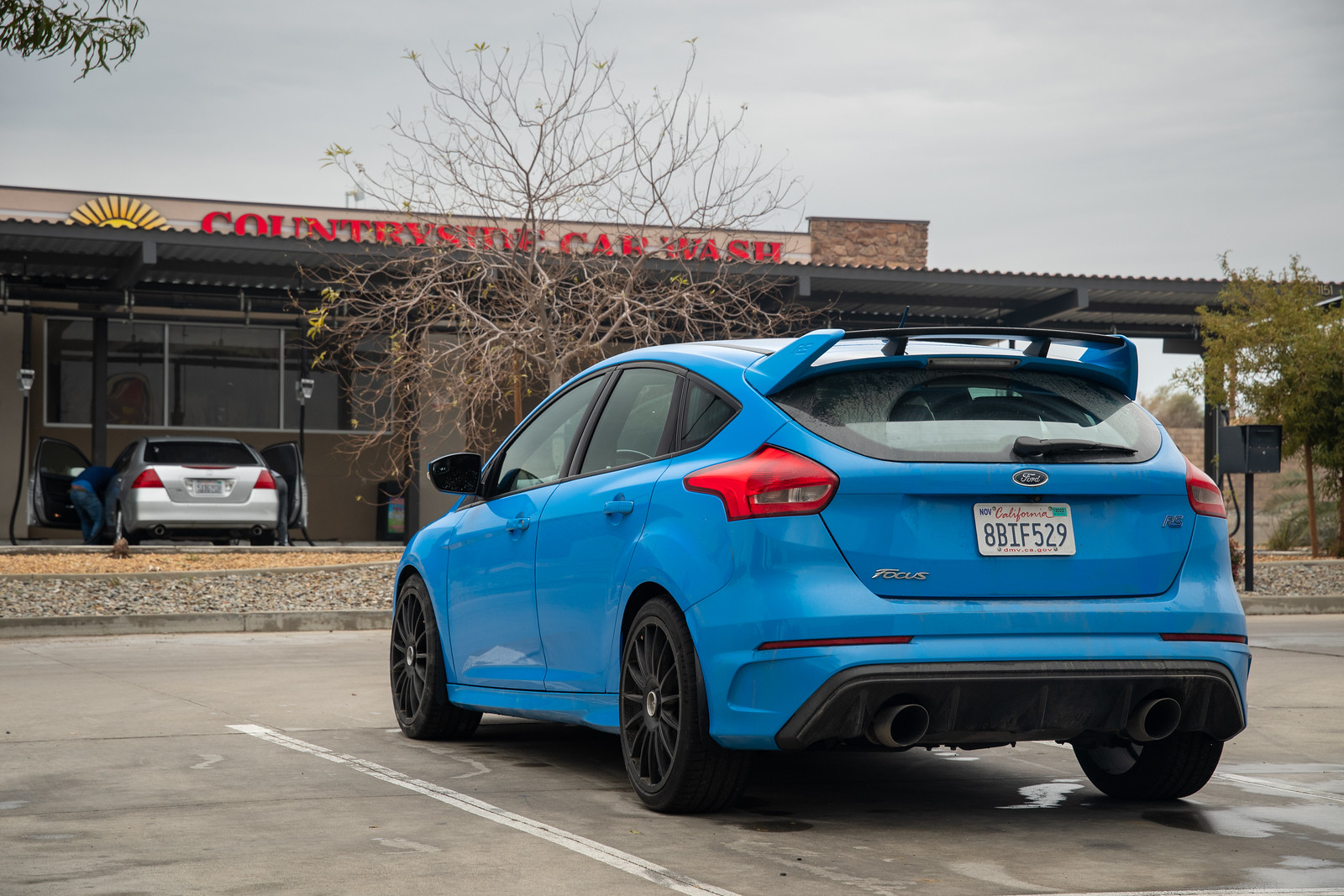 The DSLR didn't come out again until my Taco Bell stop in Taft. The only damper on the CA58 experience was rain that started to fall more aggressively in the middle of the closing canyon section. PS4S tires and RS drivetrain didn't mind but I had to dial it back a couple of notches to be safe. The Focus was already accumulating a nice layer of filth. 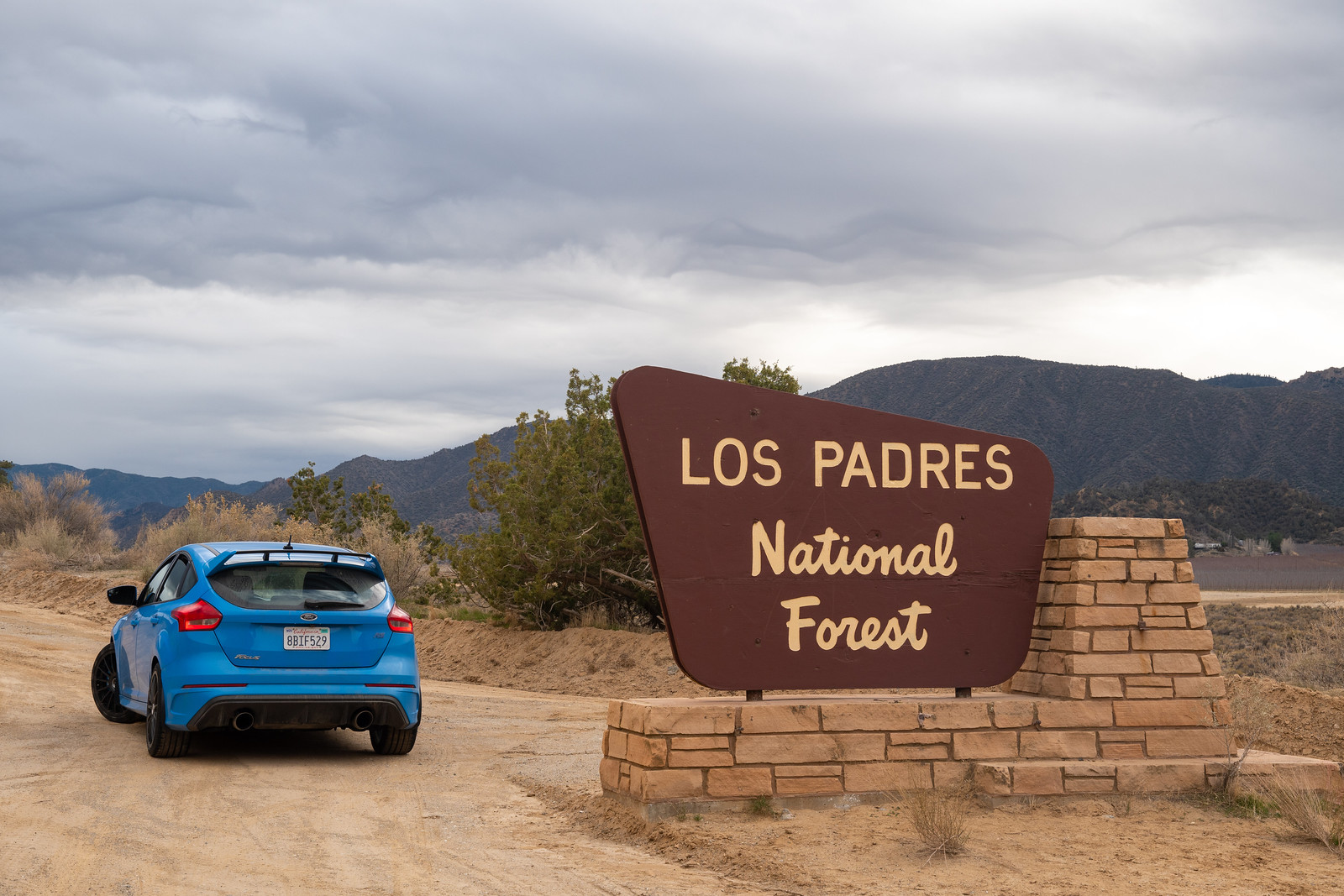 After lunch it was down 33 and into Los Padres National Forest. 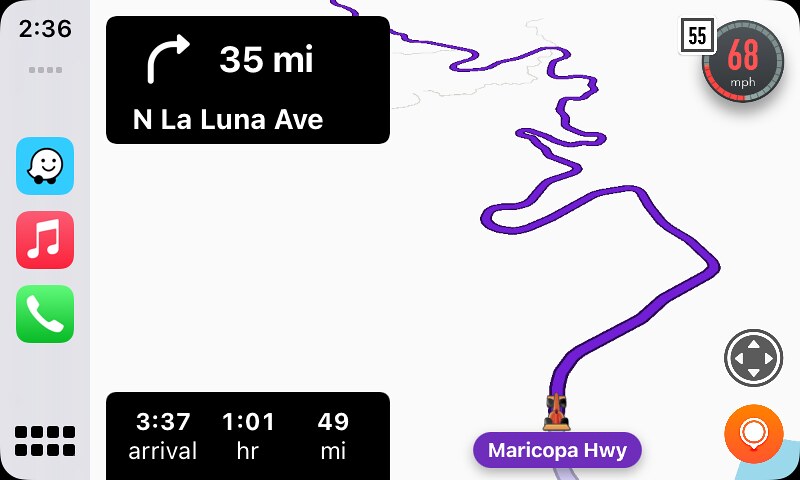 My favorite thing to see on the GPS. This road was not totally new to me - I drove it last year in the opposite (northbound) direction - so I knew it was going to deliver. 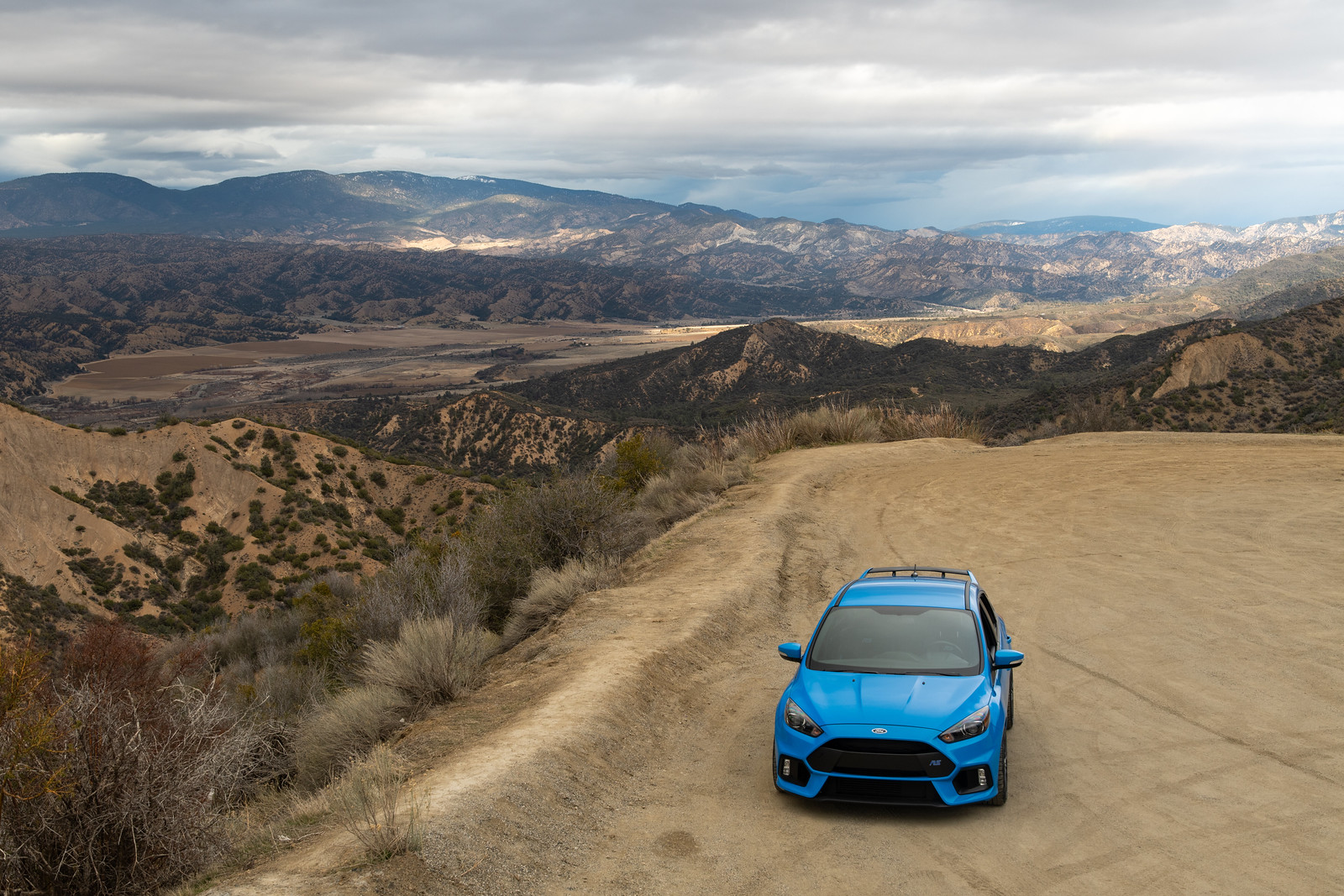 I pulled off for a photoshoot under the cloudy skies. I still love the look and aggressive stance of the RS, and no color is better-suited for it than Nitrous Blue. 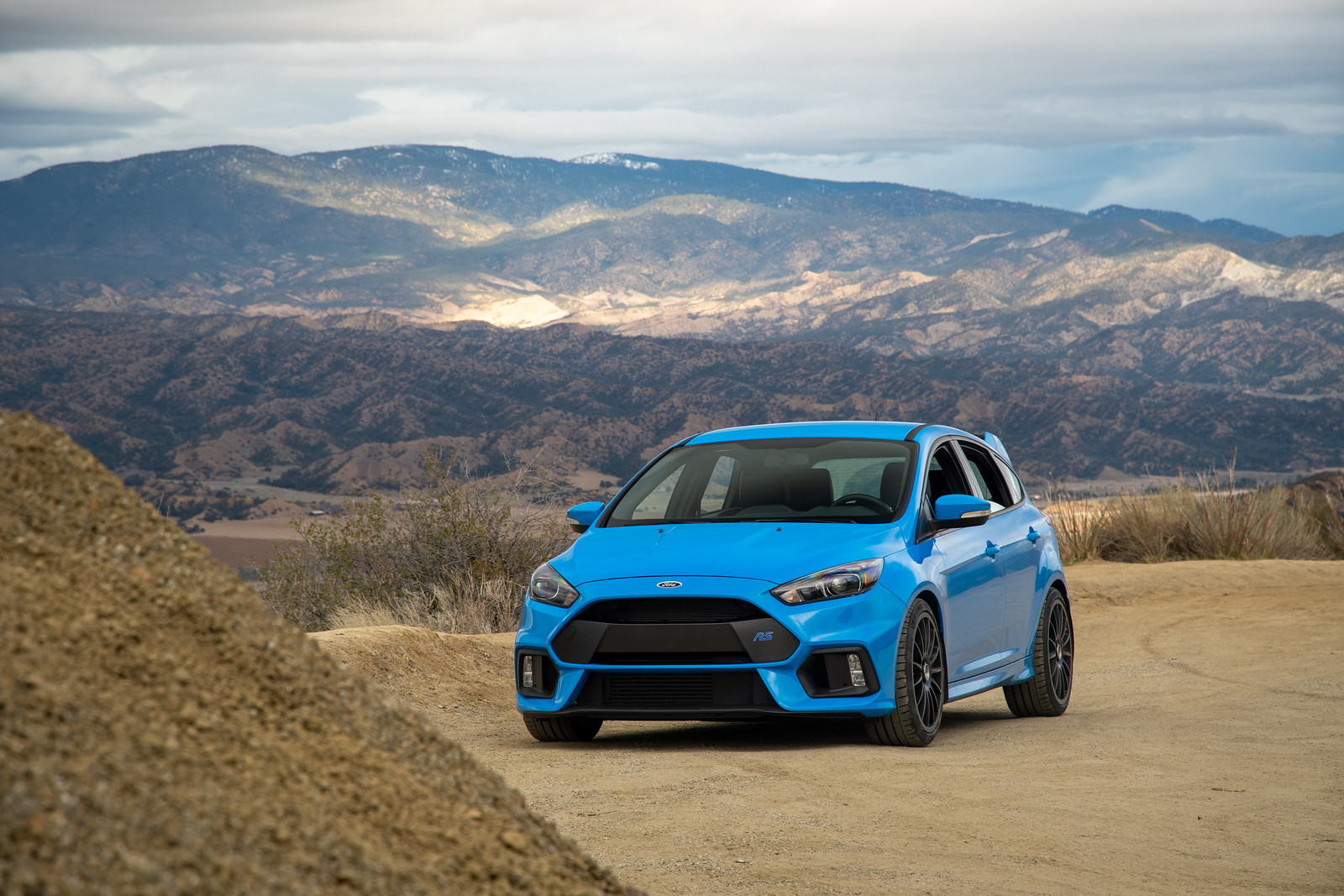 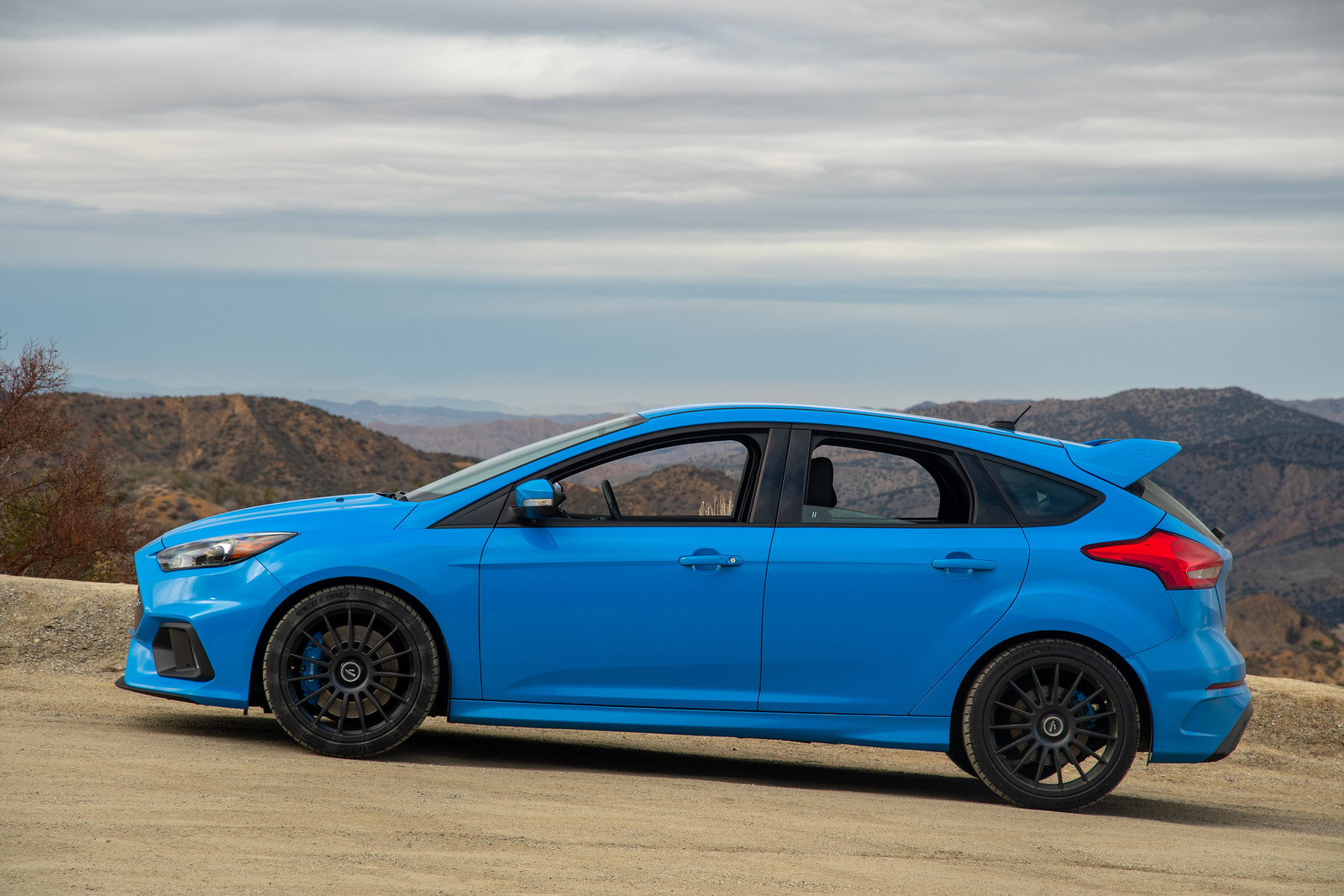 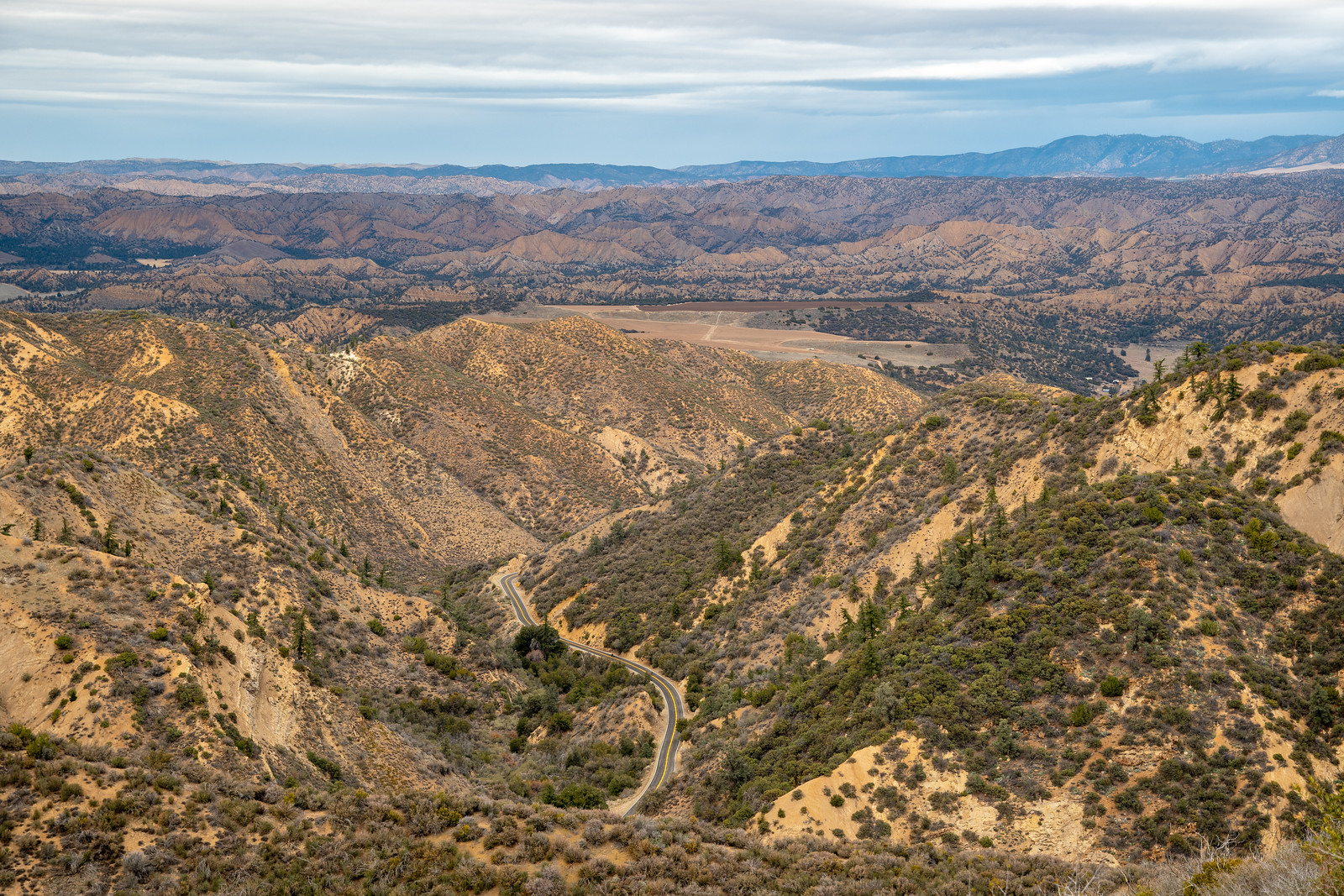 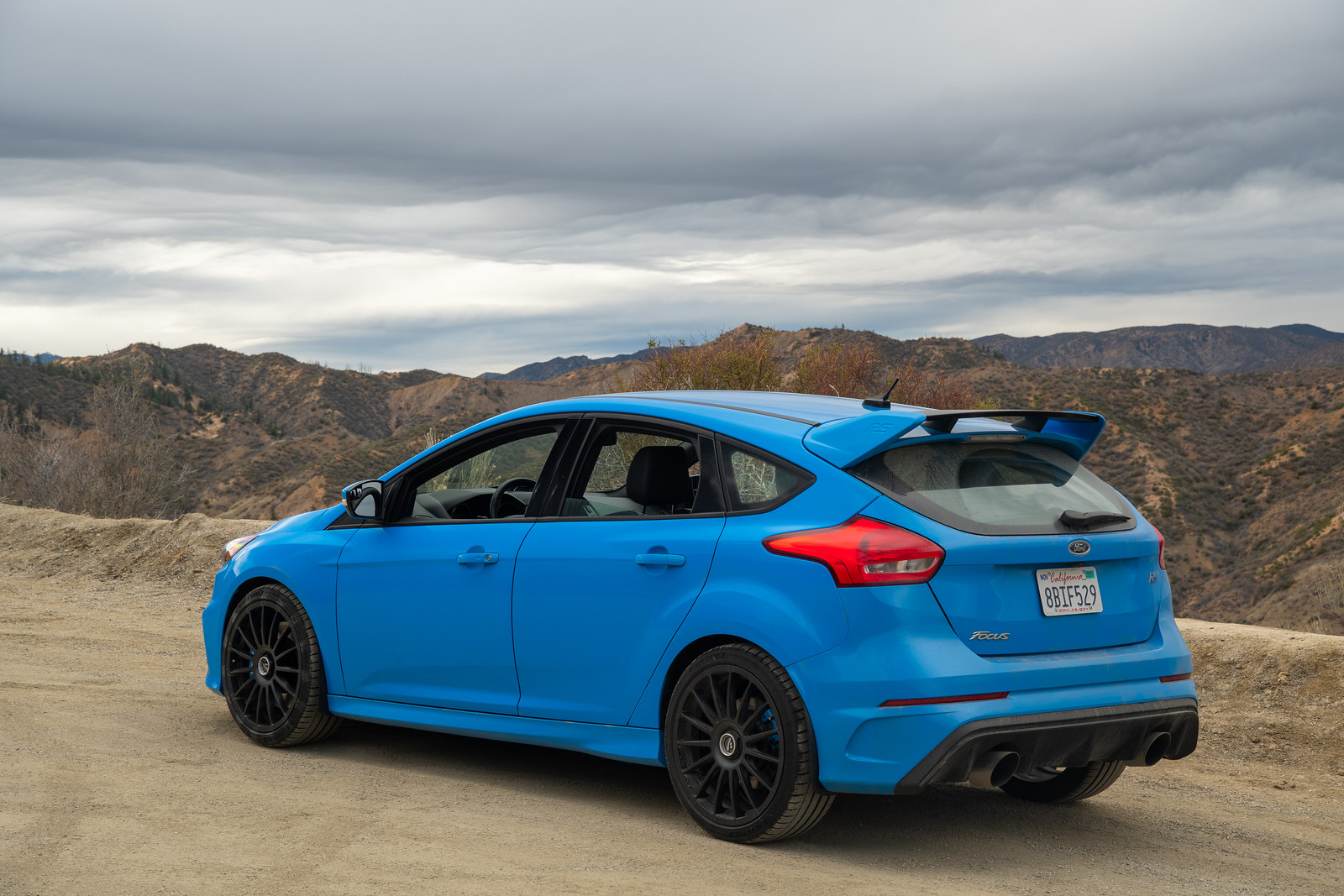 I found the drive through Ojai charming - my route took me through residential areas and it had a cool crunchy feel to it. The backside of Ventura was not so lovely but the downtown looked cool. I tried to cruise down Main Street but it's pedestrian traffic only due to Covid, fair enough. 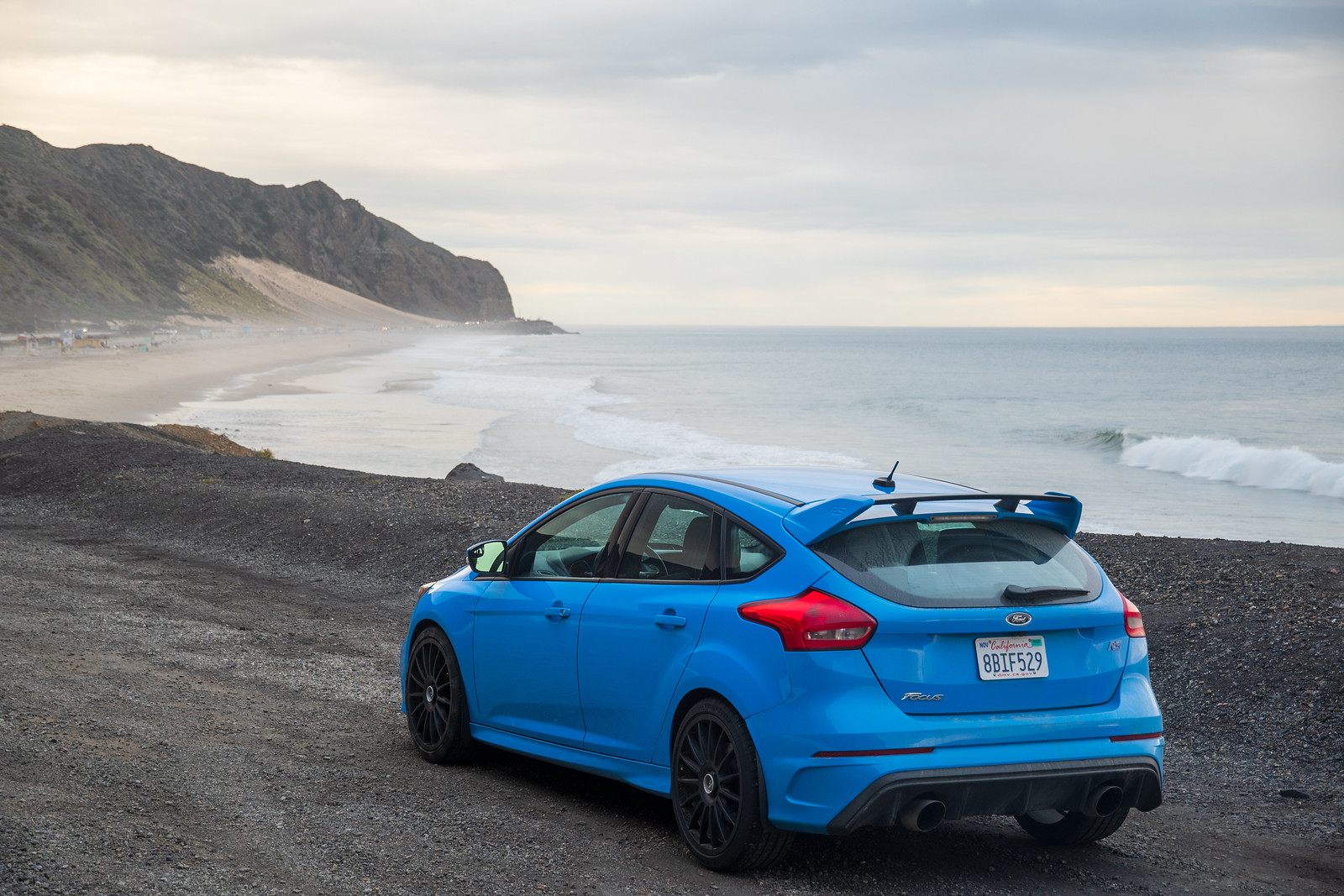 The weather was still a bit gloomy as I rolled down PCH into Malibu, and the sun was on its way out the door. 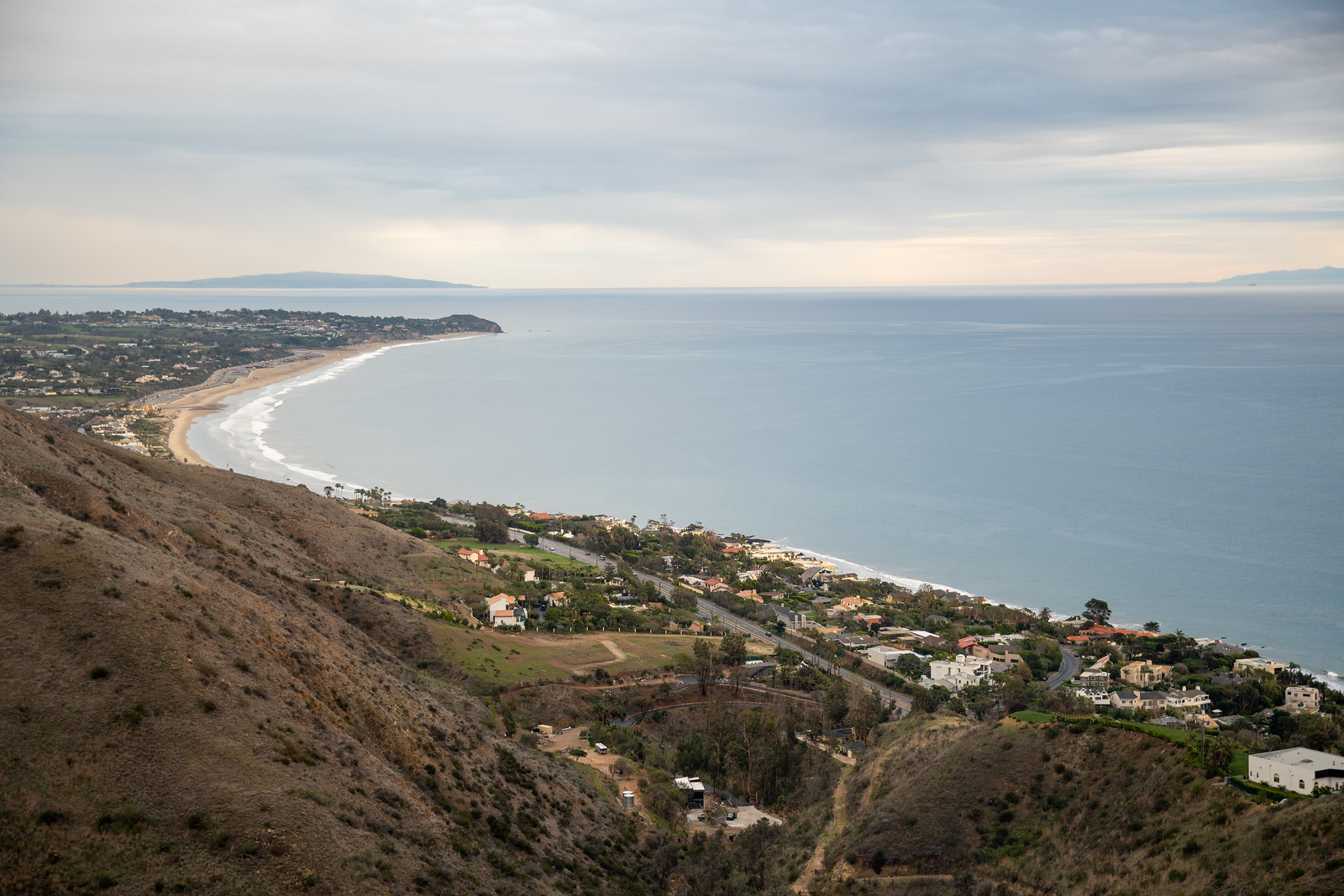 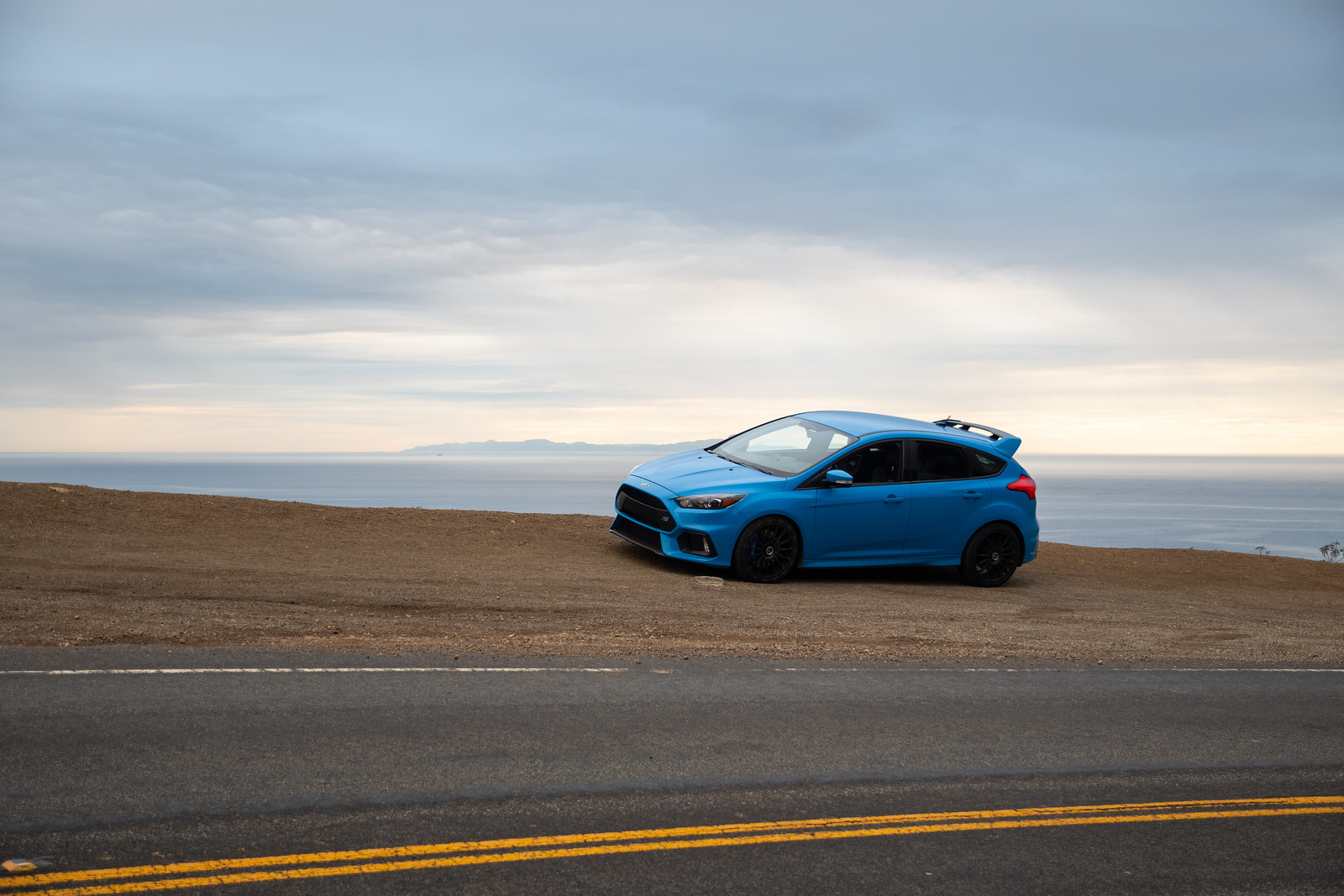 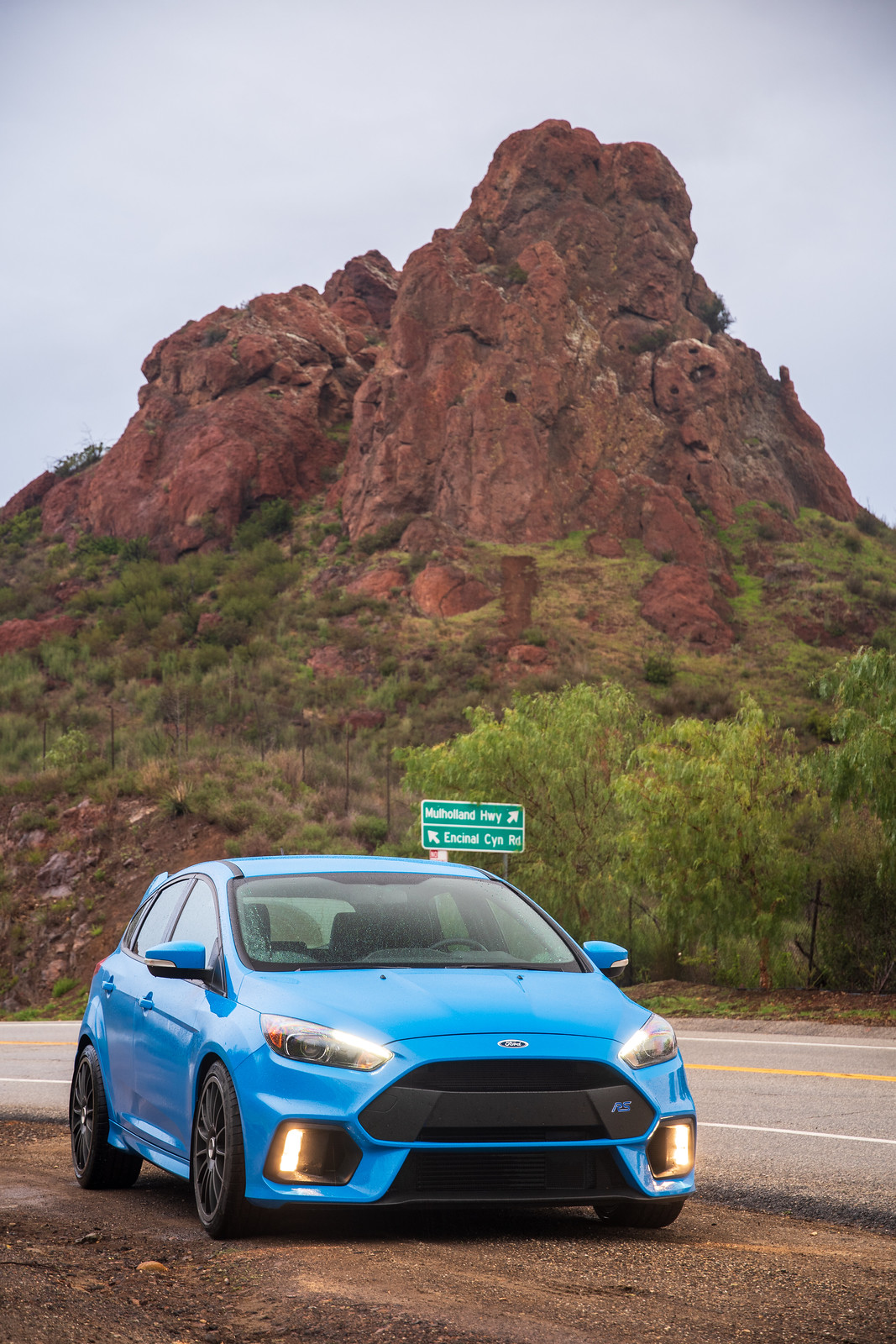 ^ really pleased with that one. 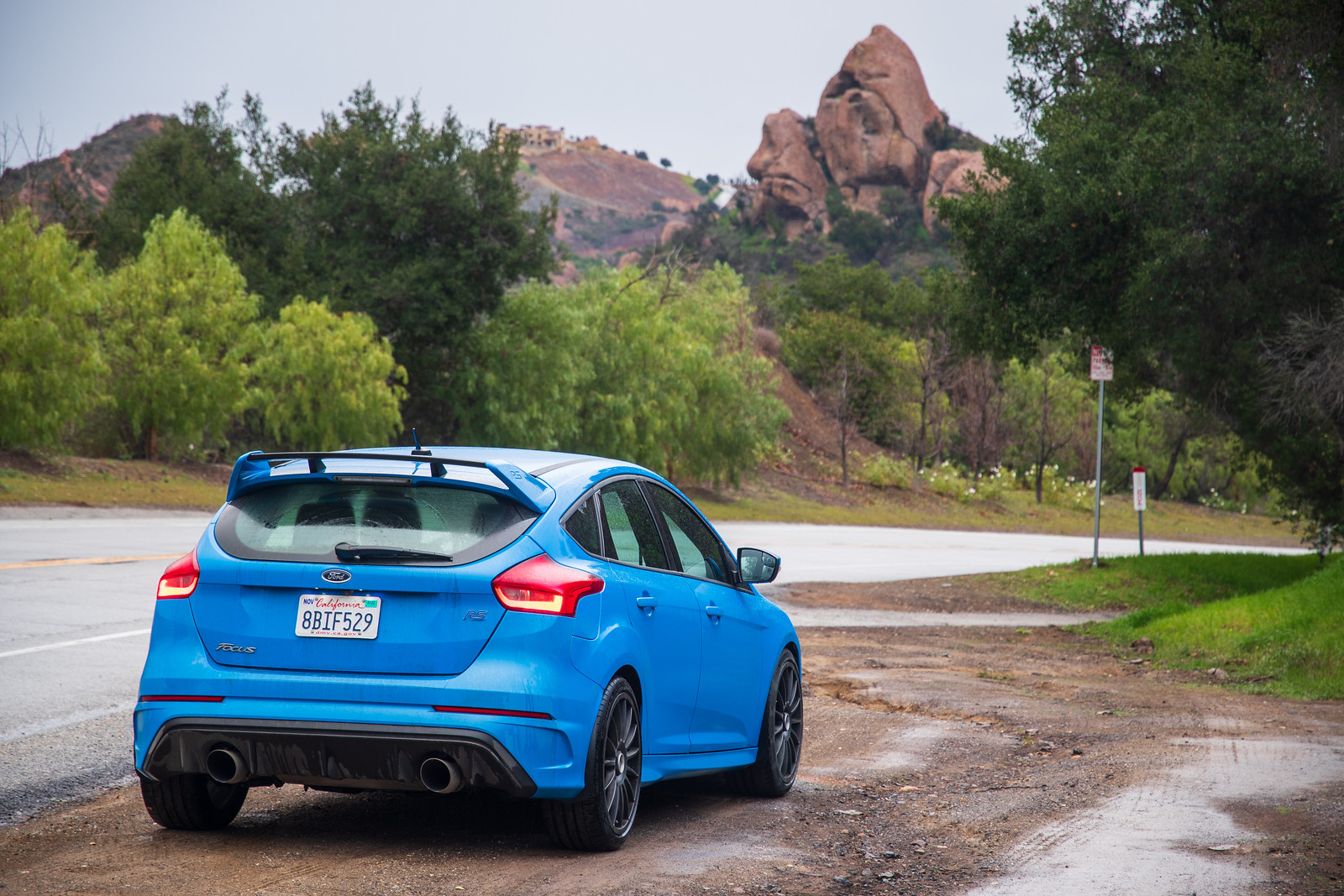 I was trying to make my way up to the "snake" portion of Mulholland Highway, but found it closed. The rains over the winter appear to have washed out and impacted quite a few of these canyon roads. Poor Malibu hasn't caught a break recently, we found it burned when we drove my Skyline home after purchase. Oh, I guess I forgot another road trip. Here it is: 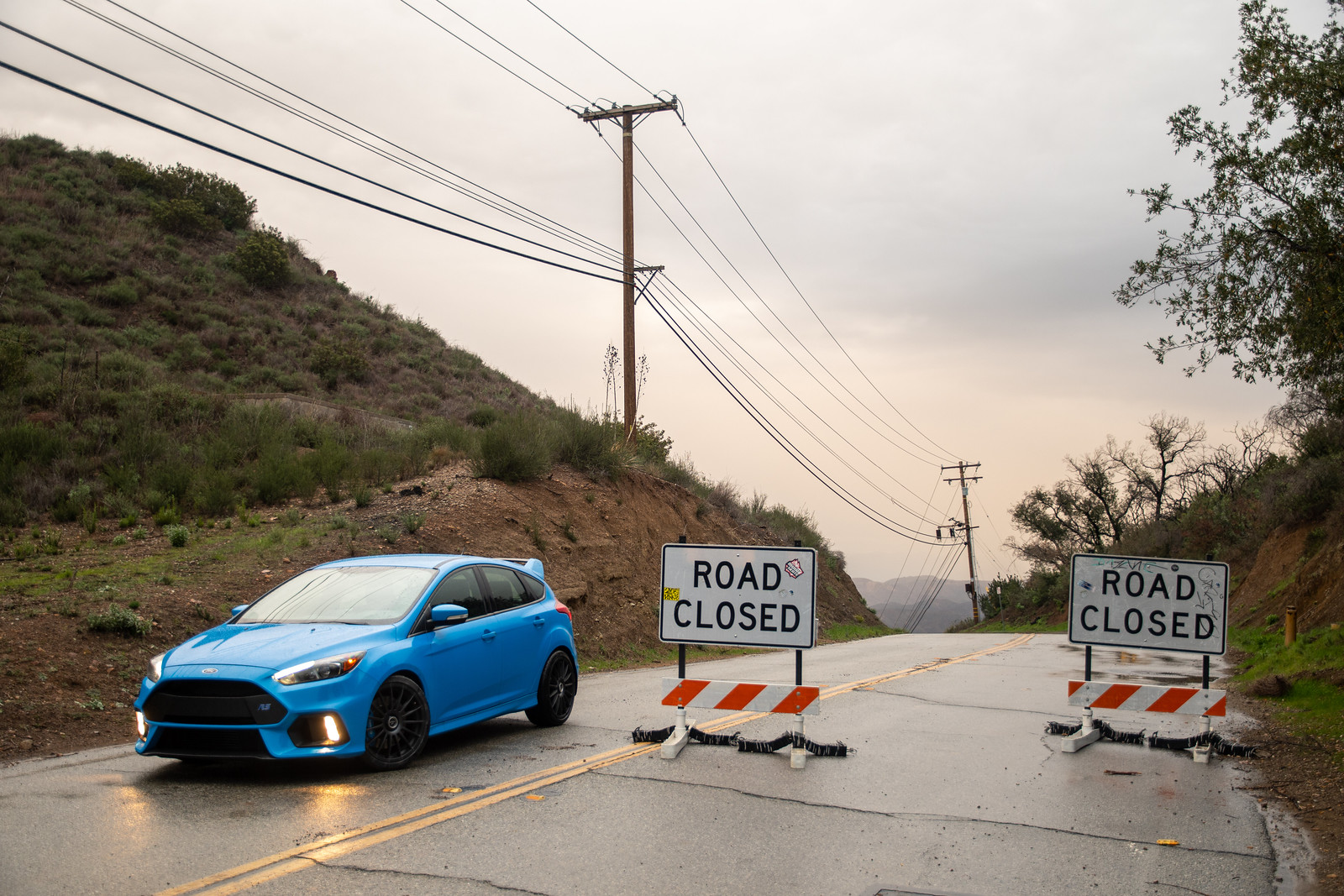 I made my way back down the hill in the dark and rain, and on to West LA where I caught up with my buddy over dinner. His apartment's garage offered some shelter in a very tight space. 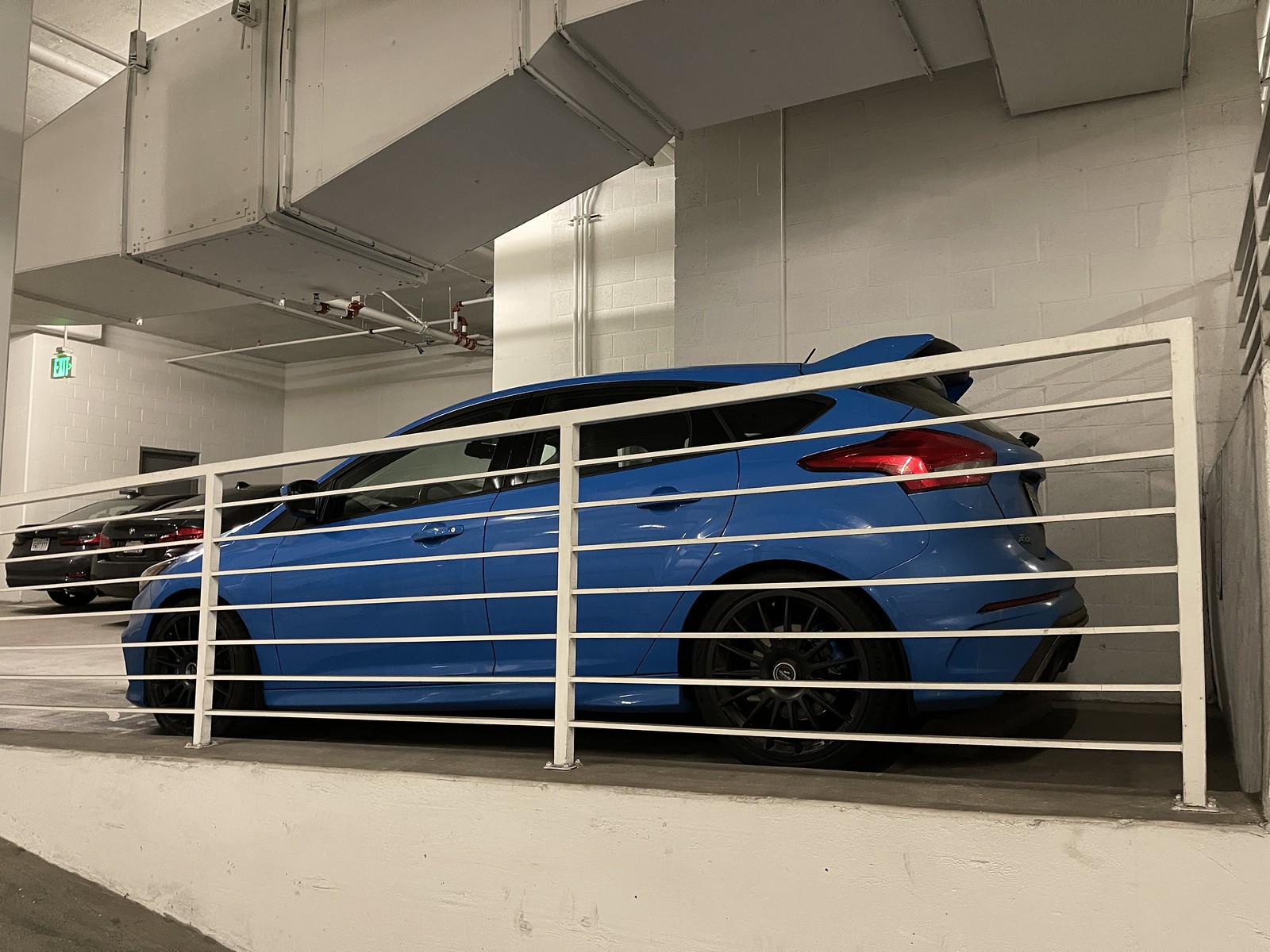 Fun driving was finished for the day, so I pointed the nose east and let the cruise control take me the rest of the way. An hour from Palm Springs, I fueled up one last time and cued up one of my favorite albums - Queens of the Stone Age's 2002 Songs for the Deaf. The record is a loose concept album, modeled after the drive from LA to Joshua Tree, jumping through fictional radio stations representing different cities along the way. It's one of the few records I'll listen to straight through from start to finish, but in many years I'd never had the chance to do it properly. Cool experience, all that Josh Homme stuff is born from the desert.

Queens of the Stone Age - Songs for the Deaf 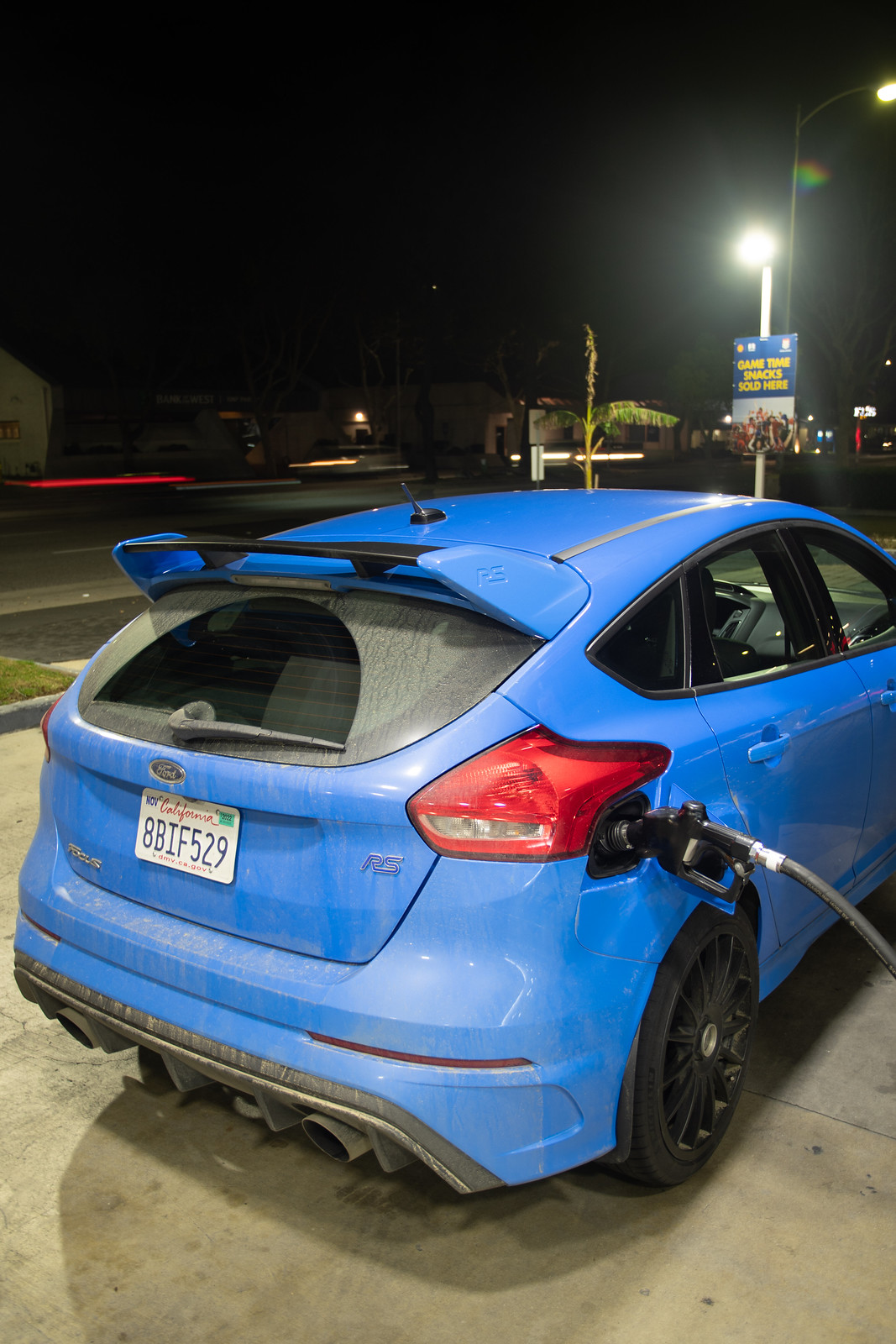 Obviously it was dark when I arrived, so I'm cheating and showing you some photos from the next day. I stayed in Palm Springs at the Rendezvous, a small 50s-style hotel with about ten themed rooms centered around a pool area. 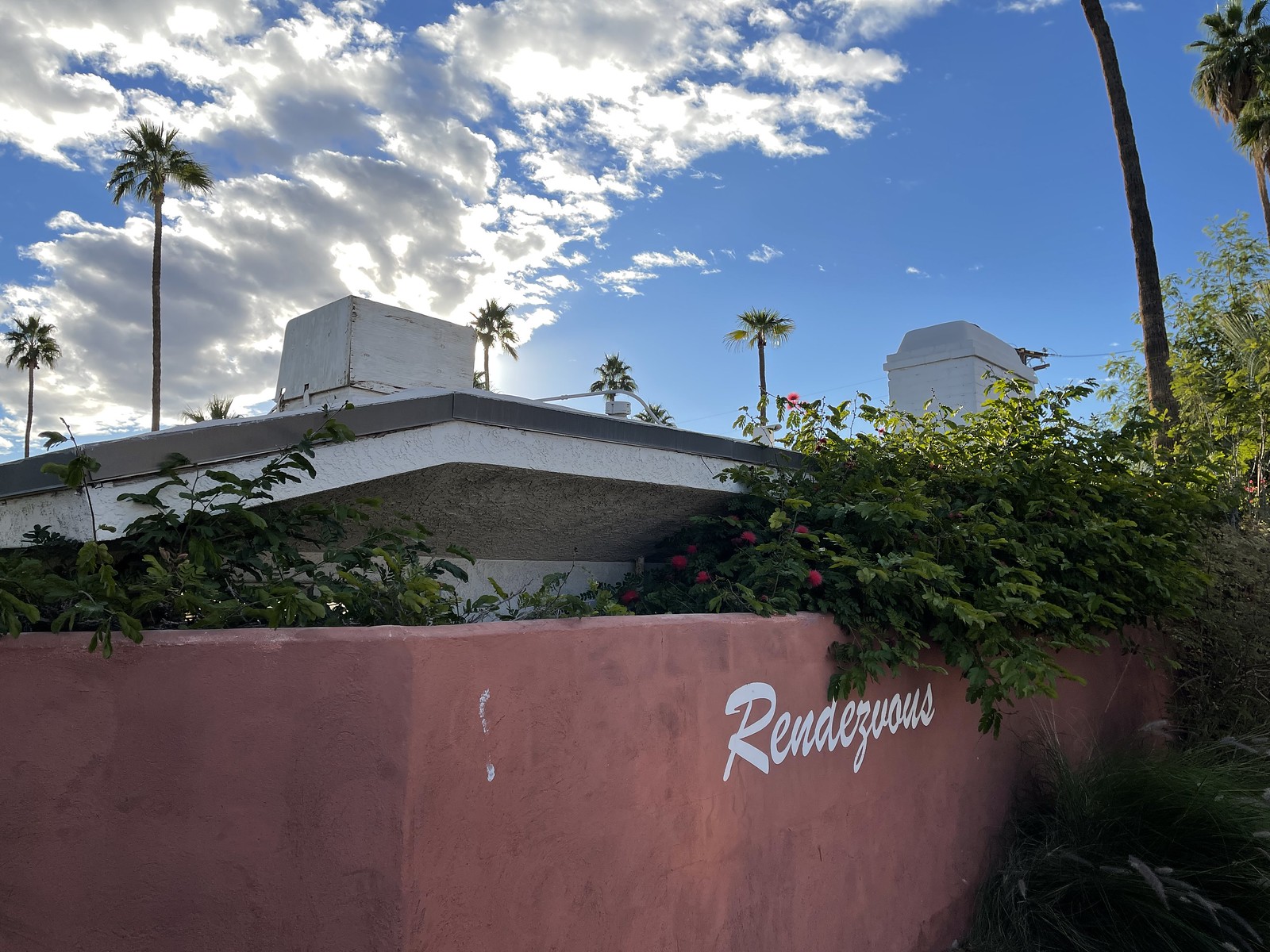 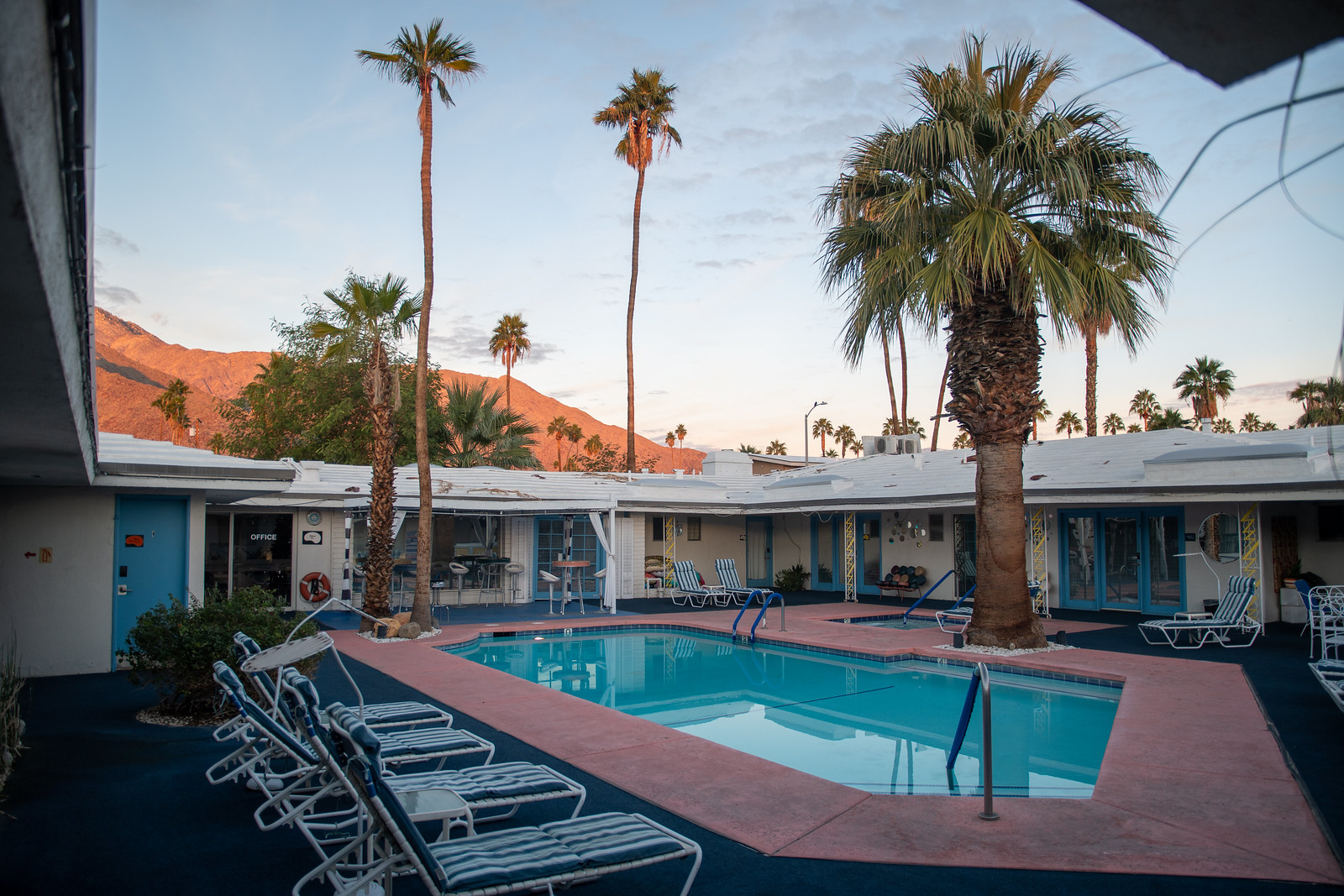 When selecting rooms, one of my options was the "Pretty in Pink" suite, decked out and fully dedicated to Marilyn Monroe. I wouldn't really have gone for this, except that they claim that she actually stayed in this room. That's pretty cool, more interesting than a James Dean tribute room, so that's how I ended up here. Bizarre room layout with the shower/tub kind of elevated in the middle of everything, but comfortable enough. 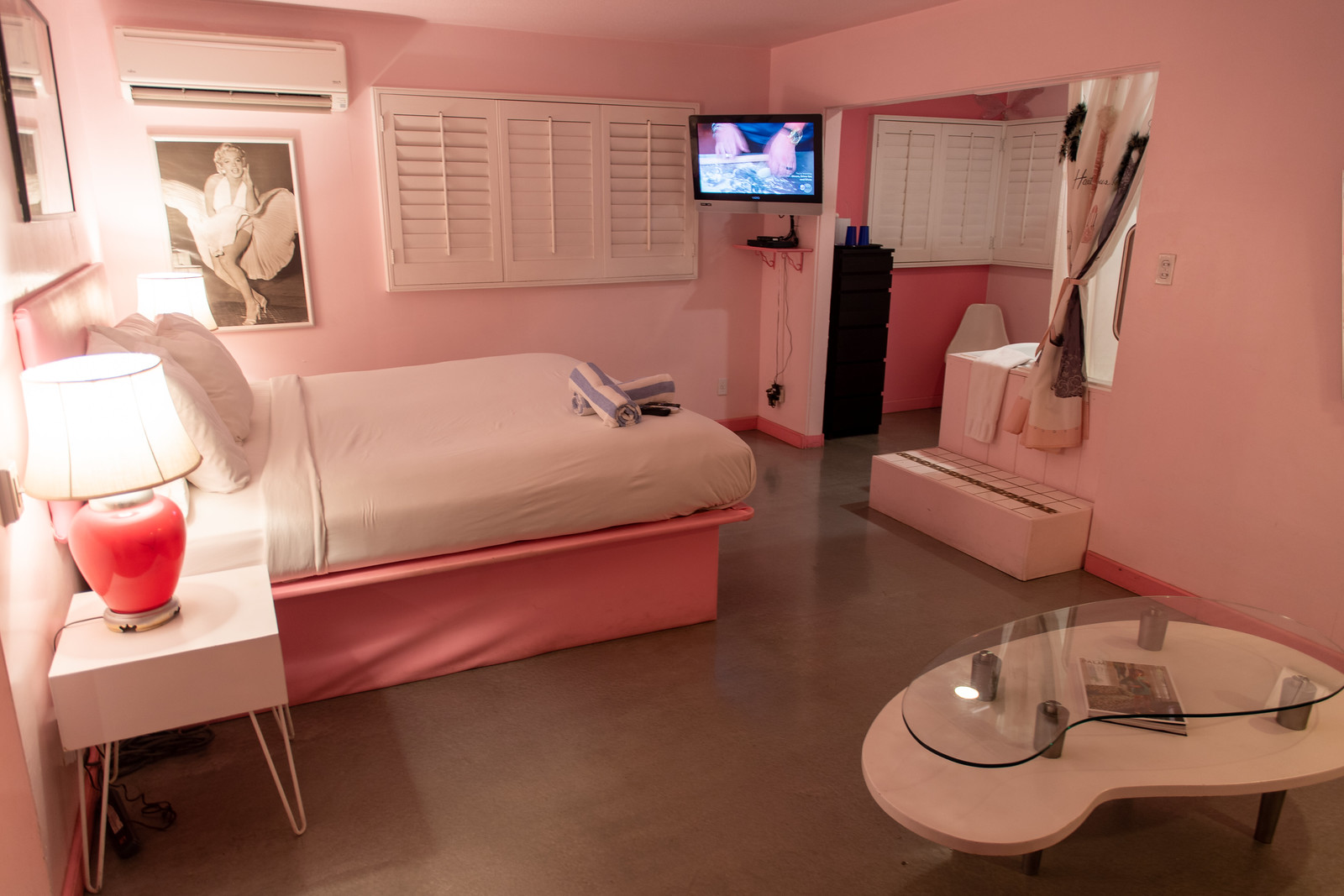 Early to bed for a second big day of driving!