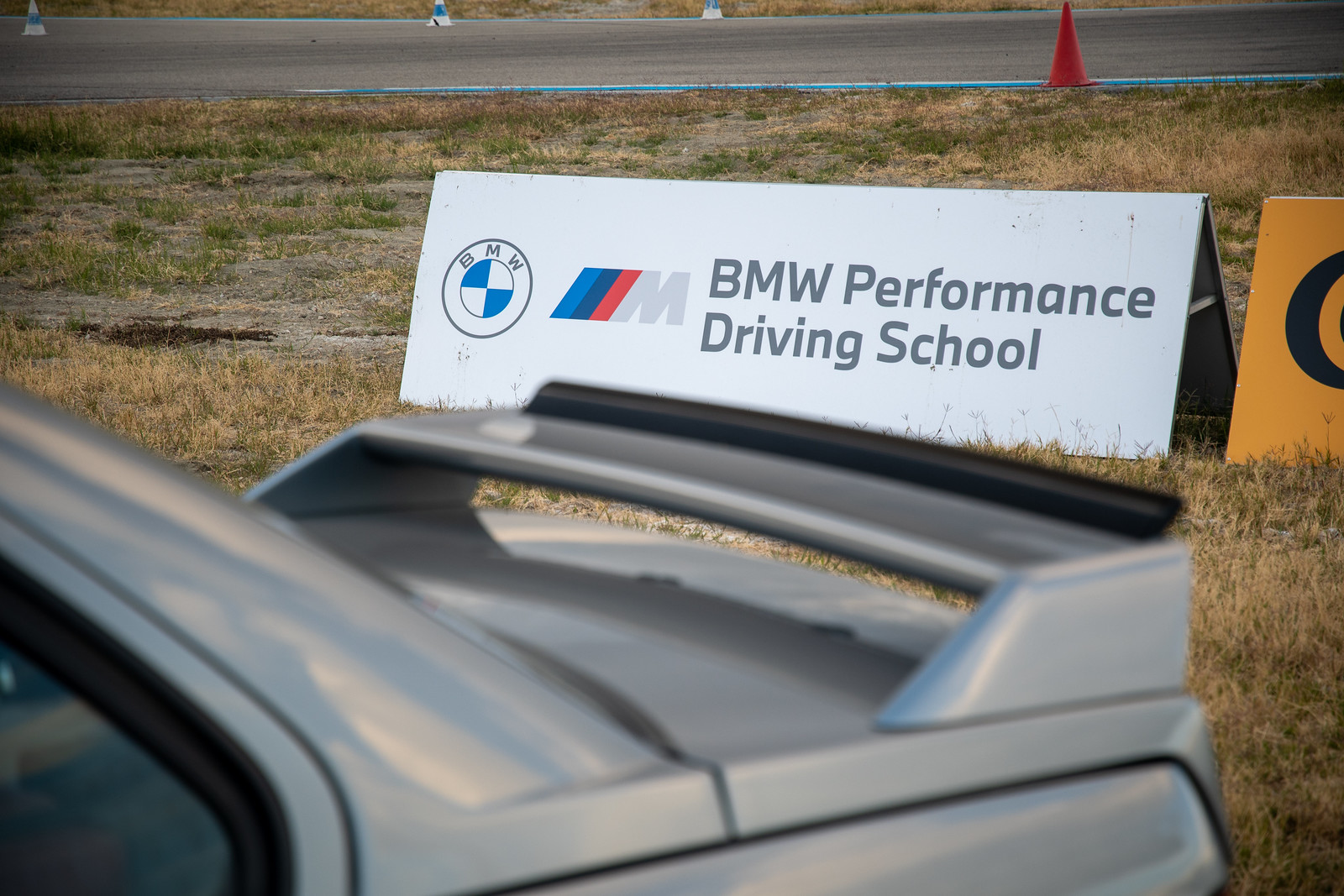 The alarm went off early on Monday. Palm Springs put on a desert light show to coax us out of bed - the big day was upon us. 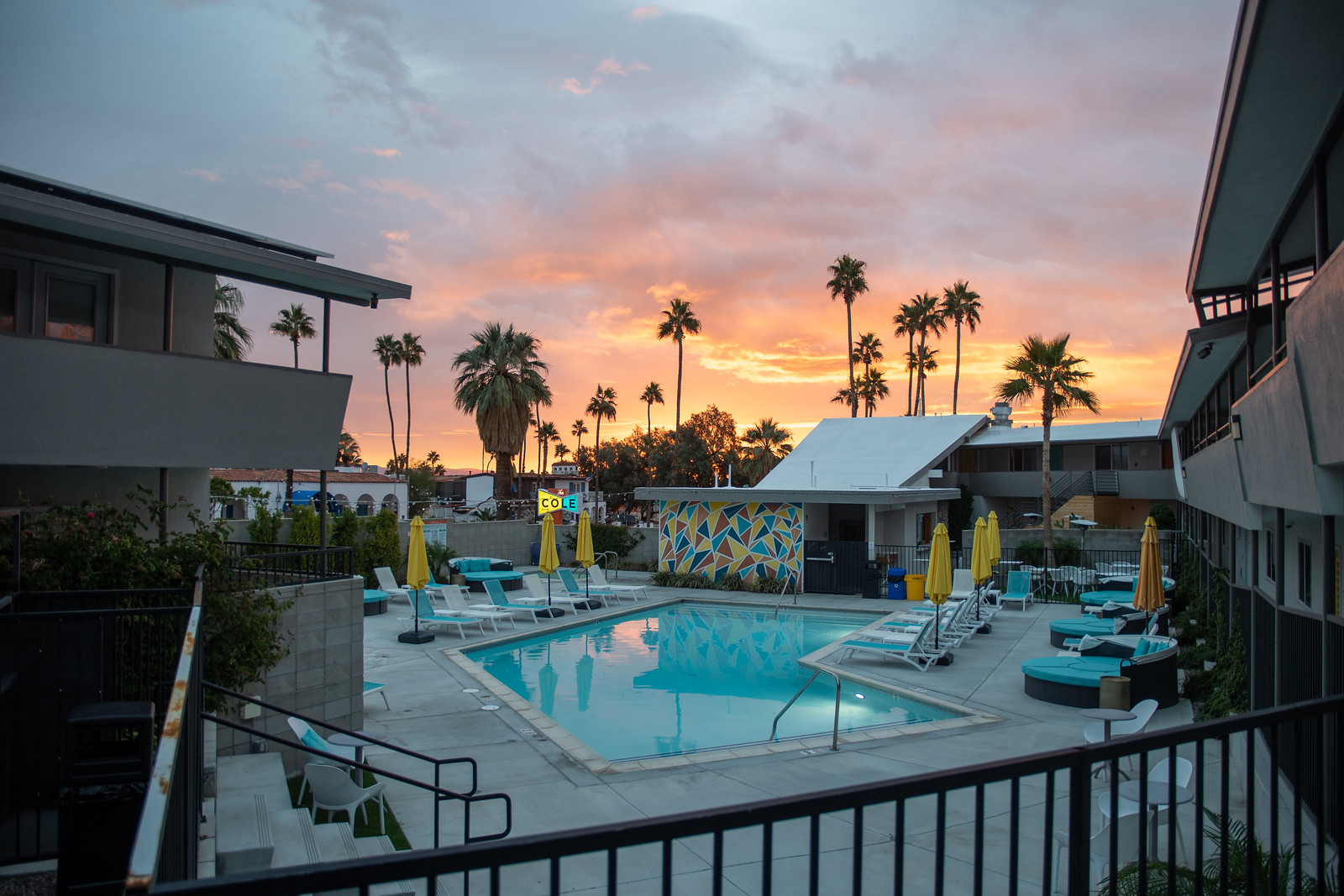 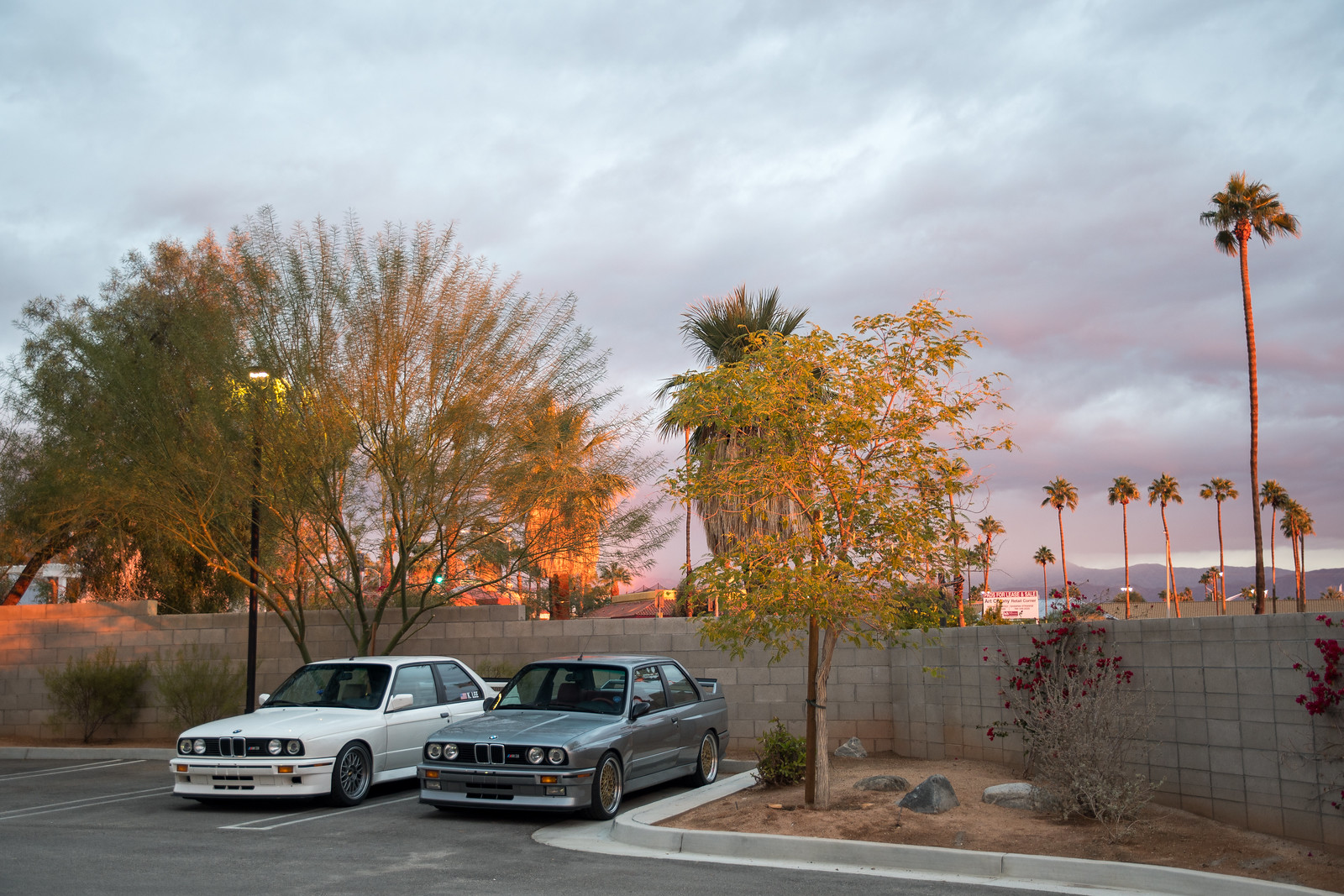 We made a pit stop at Starbucks, then followed 10 east for about 40 minutes. The BMW Performance Center West is co-located with the Thermal Club, a private racetrack-community complex. BMW has their own corner of the campus with a handling course, polished concrete skidpad, and paved exercise area. One of the driving exercises uses a portion of the Thermal Club circuit - both times I've visited, I've been on the Desert Circuit (north end, green kerbs). 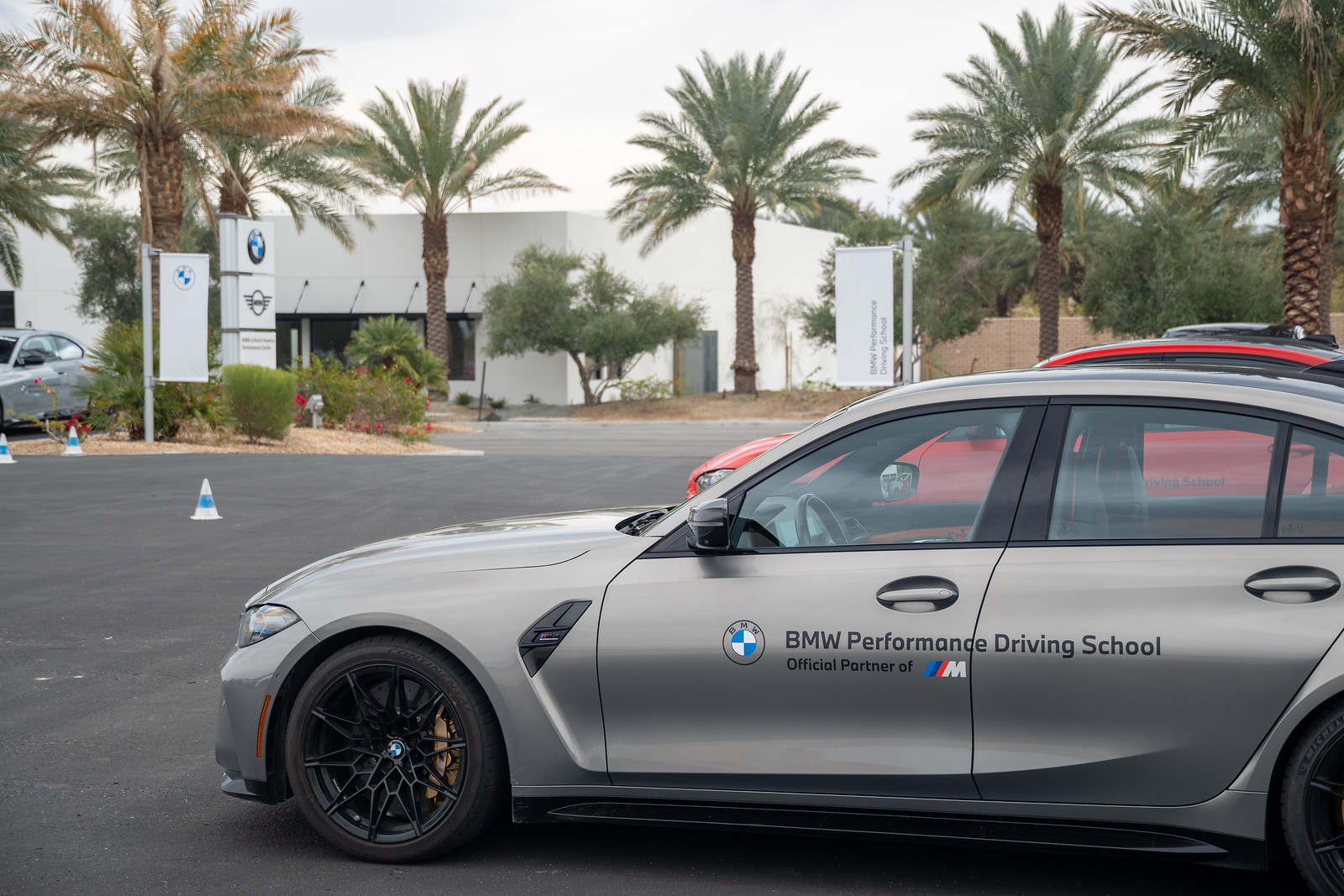 Yep - this is my second time doing one-day M School. Last year I joined on a late whim, when someone sold their spot in the class on short notice. You can read all about that experience here if you haven't already. Obviously I enjoyed myself enough to return in 2023. 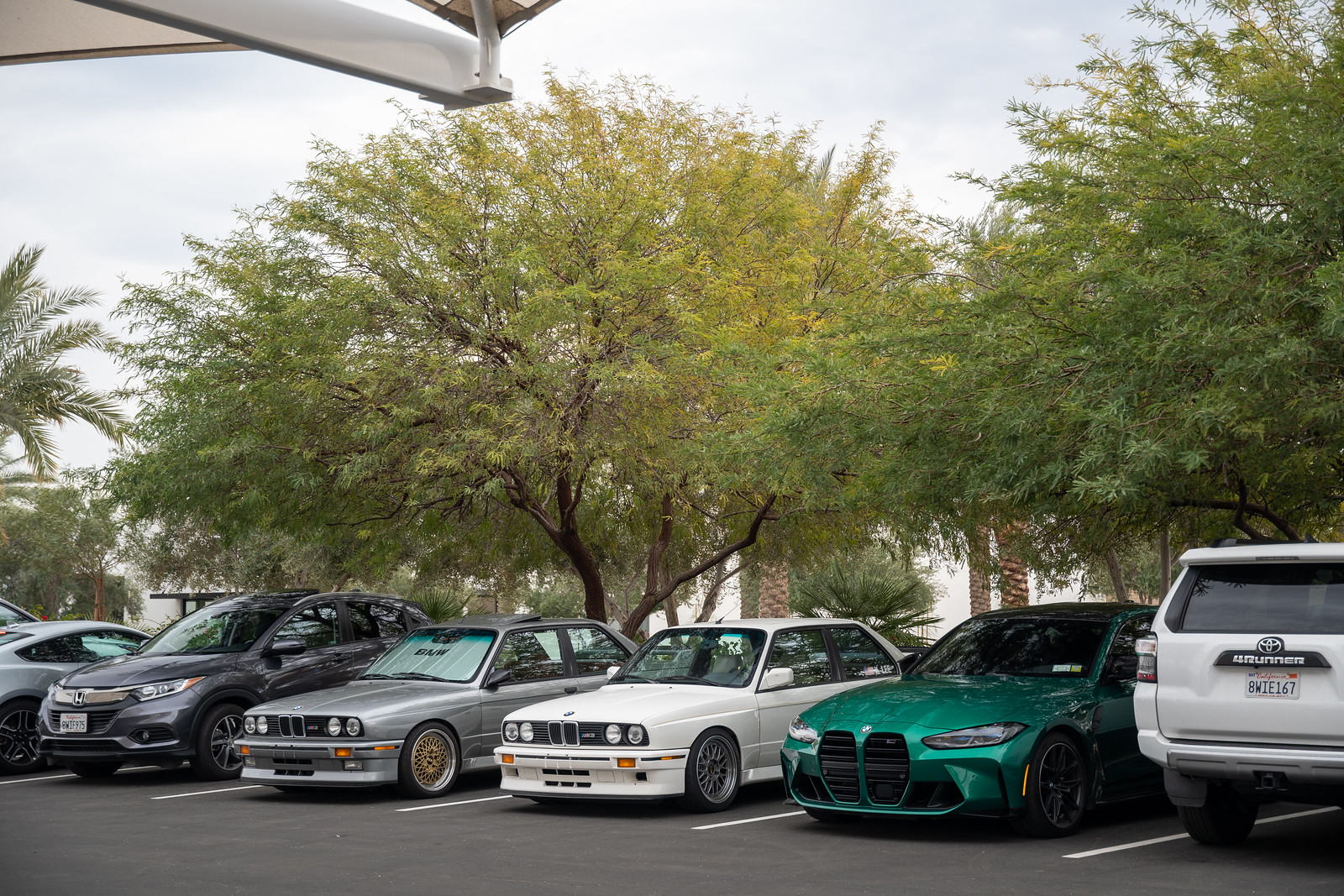 It felt better, and more natural, to pull in to the school in my BMW. We were warmly greeted by the instructors and our classmates - it's become uncommon to see these old M3s out and about. 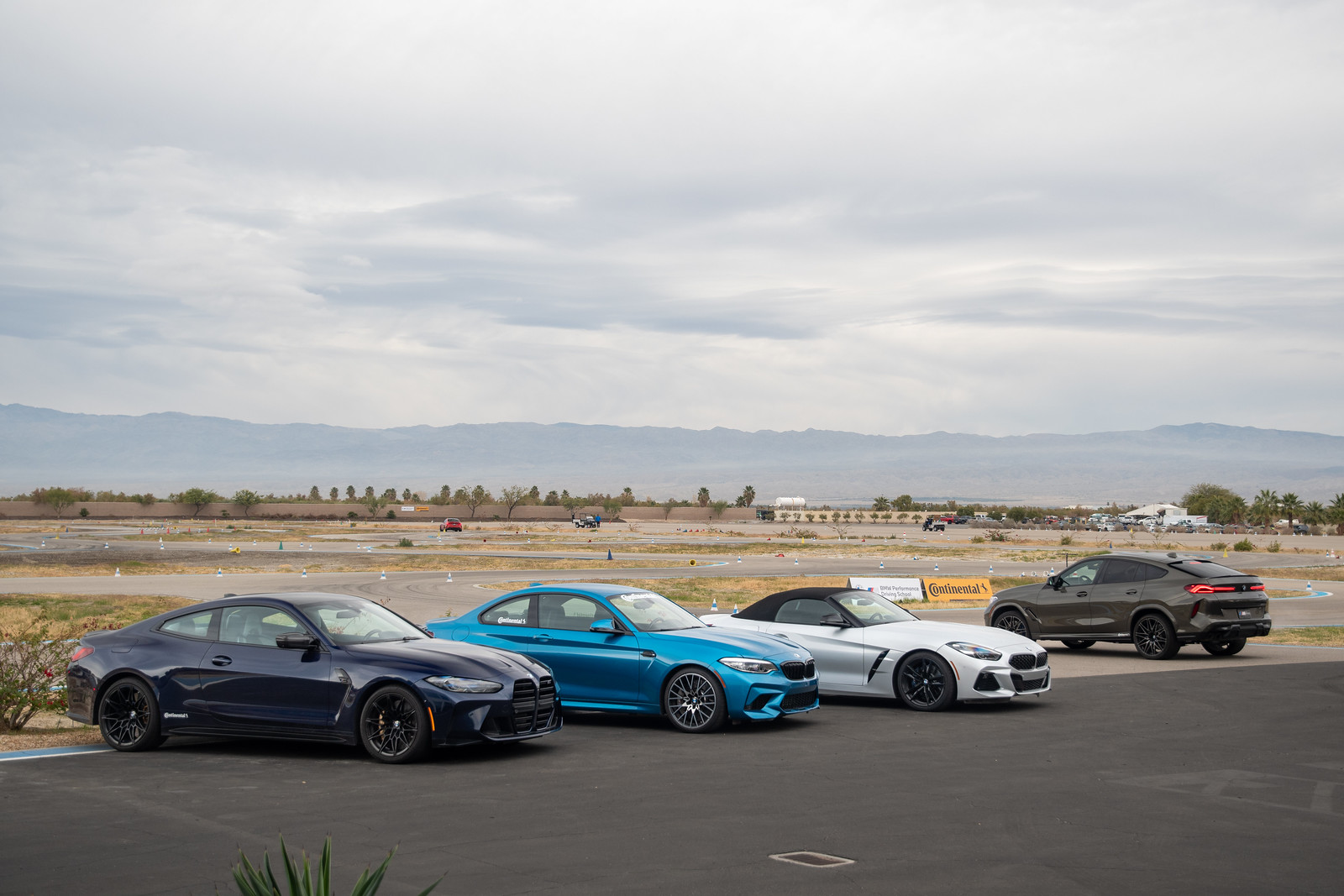 When we arrived, there was already a group starting their handling exercises. I believe this is the delivery experience, where owners get to drive "their" new cars (equivalent cars owned by BMW) on track with professional instruction. I love that BMW offers this! Modern sports cars offer performance capability that can only really be safely deployed on track. A program like this can develop in the owner an appreciation for the engineering of the cars, and a respect for the power available from modern motors. I certainly gained a huge appreciation for my Focus RS when I did the included driving school (link), so much that I started tracking it regularly, something I definitely had not planned to do. 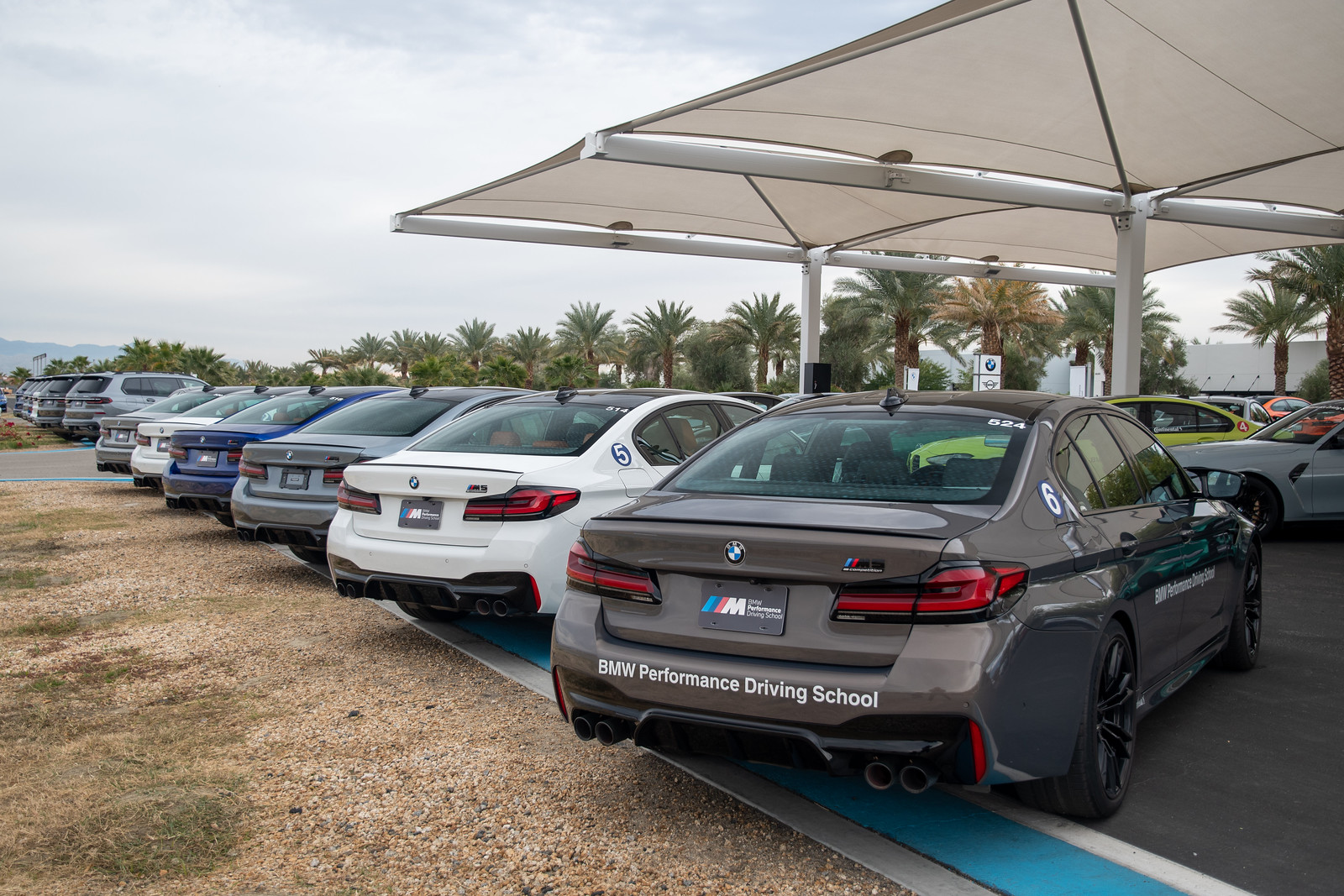 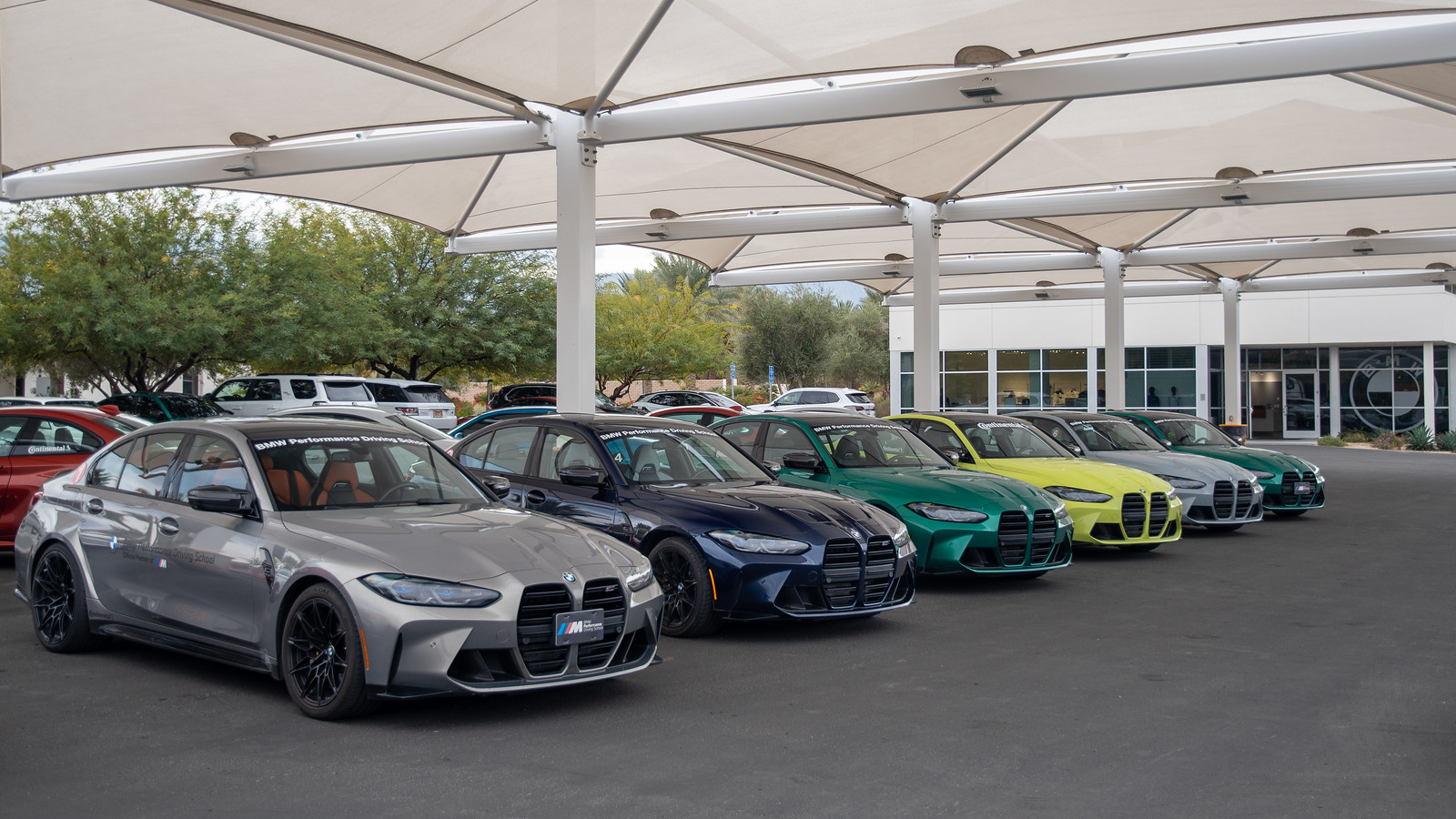 The roster of cars for the M School was the same as last year - M2, M3, and M5 competitions. Last year the instructors were chatting about the M3 xDrive variant, so I thought perhaps they'd swapped RWD for AWD, but this was not the case. 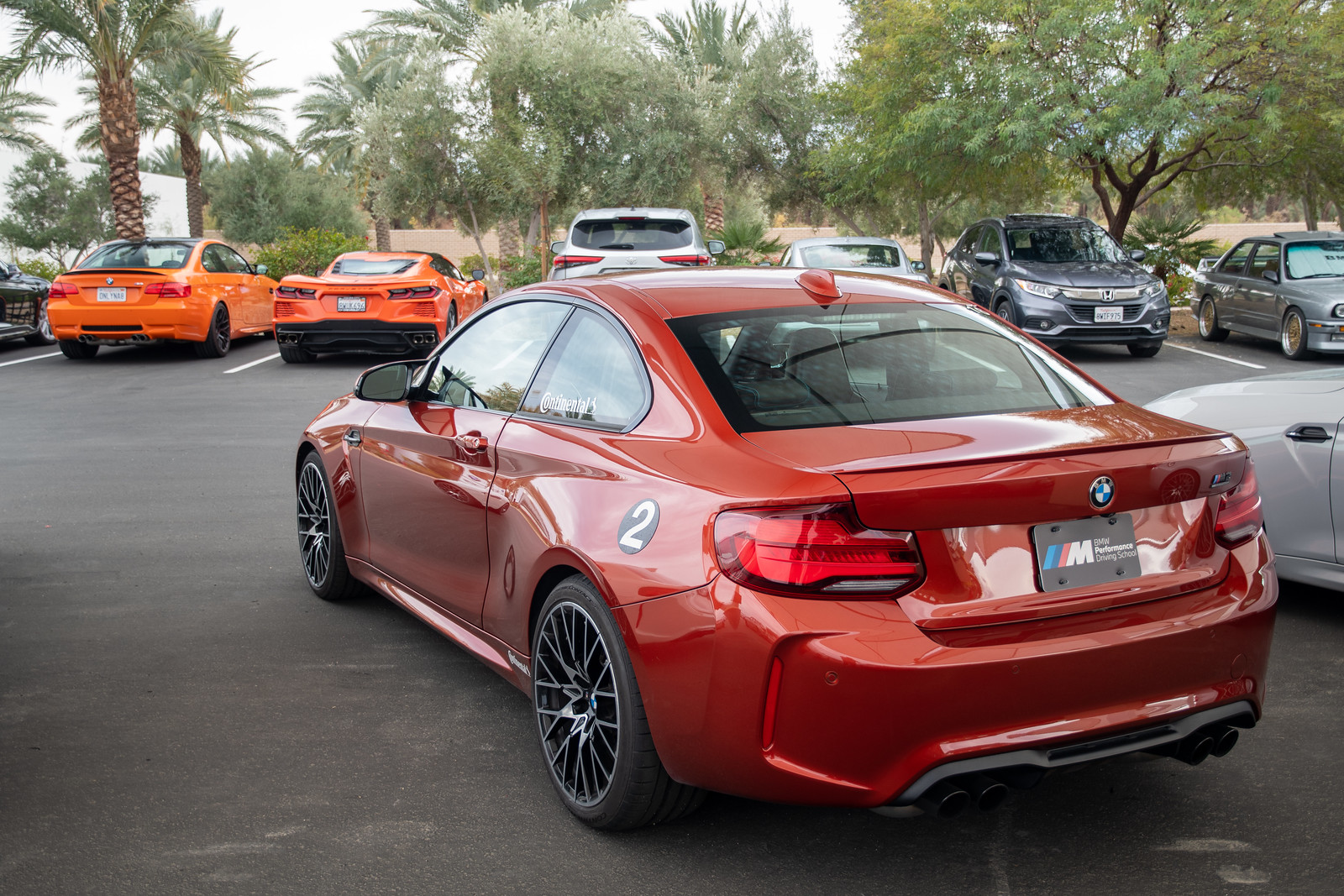 Three takes on orange. The Lime Rock E92 is my favorite, but I'd be happy with any of these three. 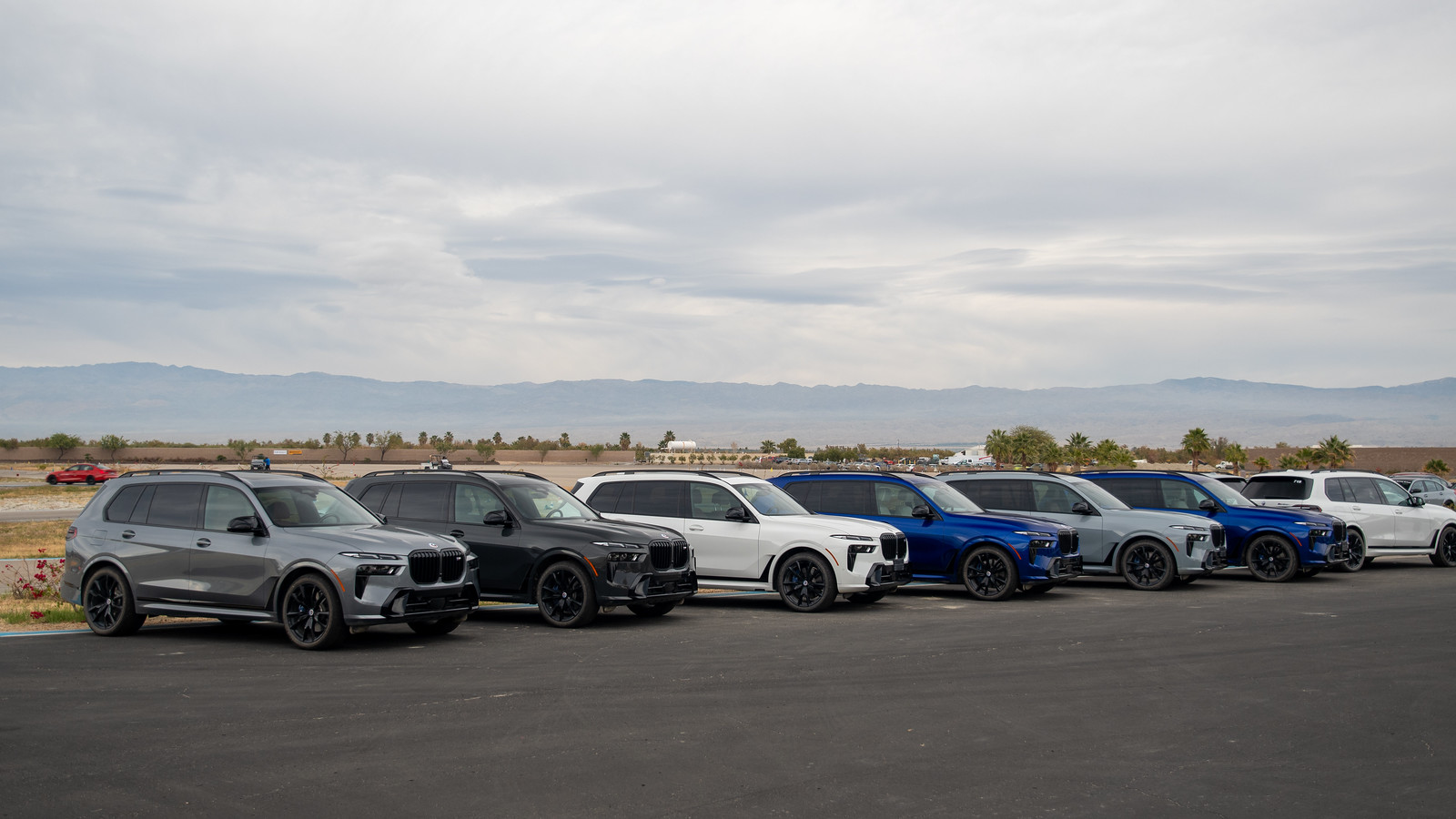 The new front end treatment is a travesty on the 7 series, but I think it suits the x7 well. I've driven an X4M Competition on a brief street loop, I think it would be hilarious to try one of BMW's SUVs on an actual track. 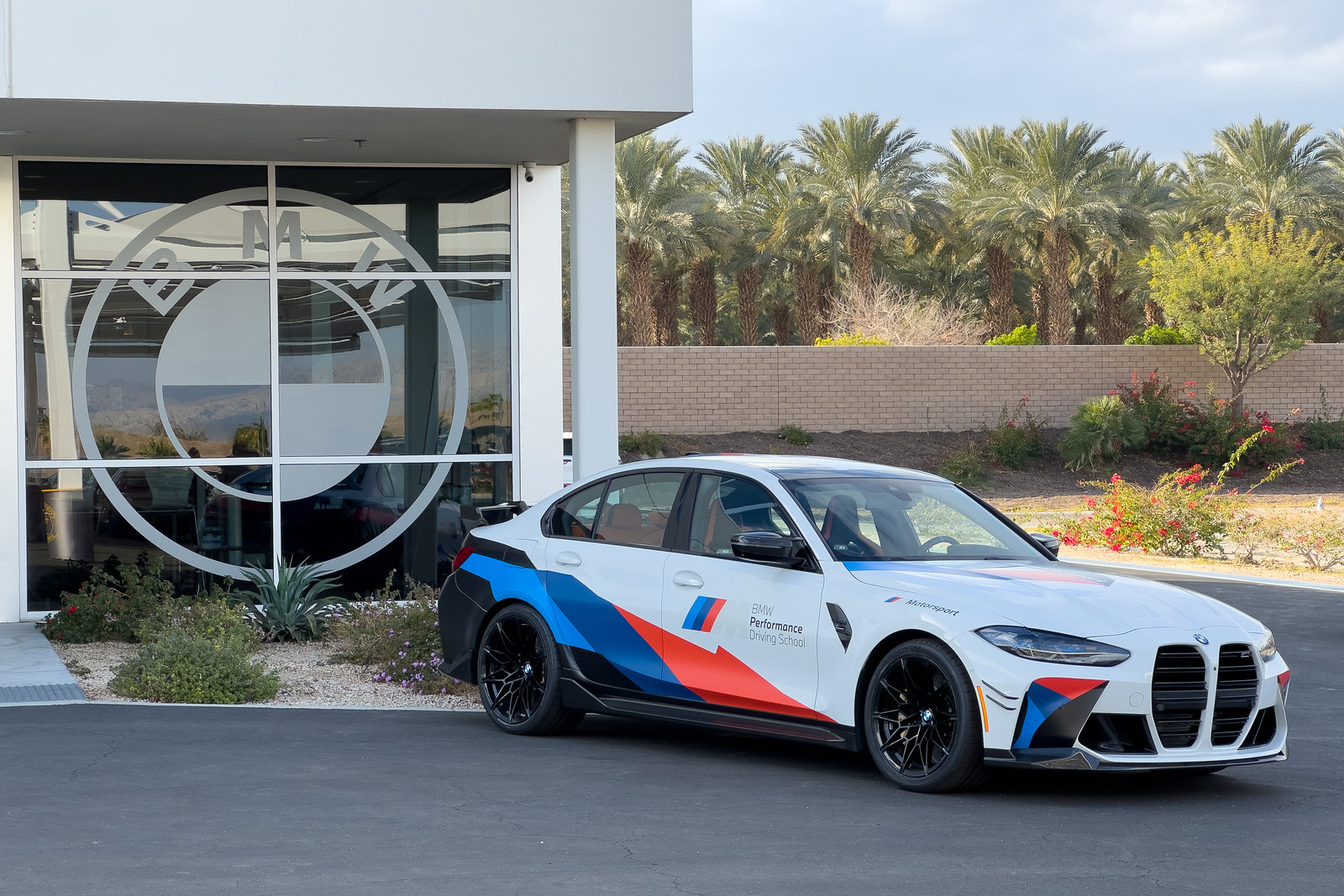 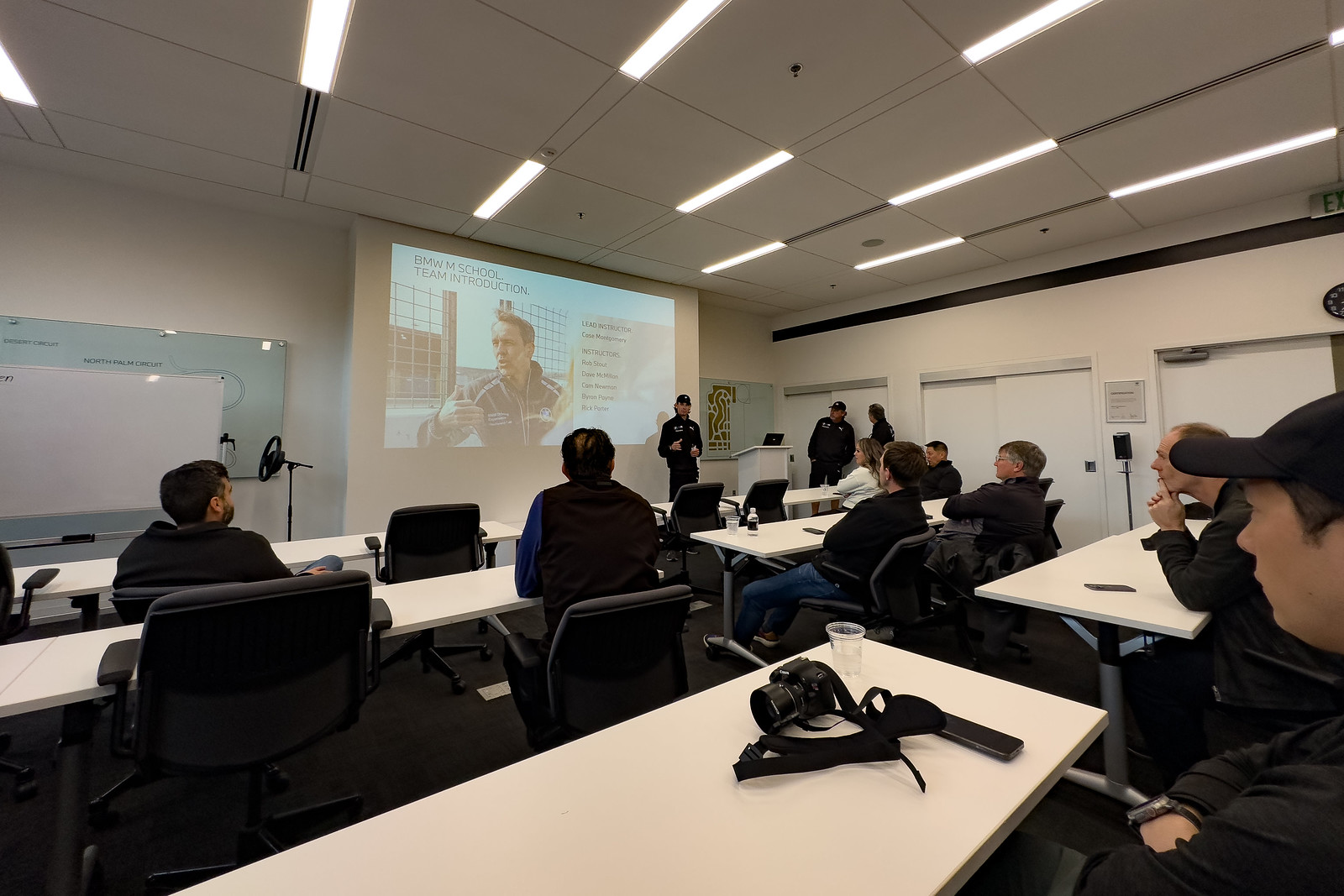 We started with approximately an hour of classroom instruction, and while I've heard most of it before, BMW has refreshed the instruction materials and the updated diagrams and explanations are well-done. This year I also had a different set of instructors, which is always valuable for gaining new insight to your driving strengths and weaknesses. Our classroom session was presented by Rob Stout, the chief instructor for the Performance Center West.
Agenda for the day:
1. [M2] Handling course
2. [M5] Polished concrete skidpad
3. [M3] Corner exit speed exercise
[Lunch]
4. [M3] Lead-follow on Desert Circuit (+ instructor ride-along)
5. [M5] Rat Race (polished skidpad)
6. [M2] Handling course / autocross (timed) 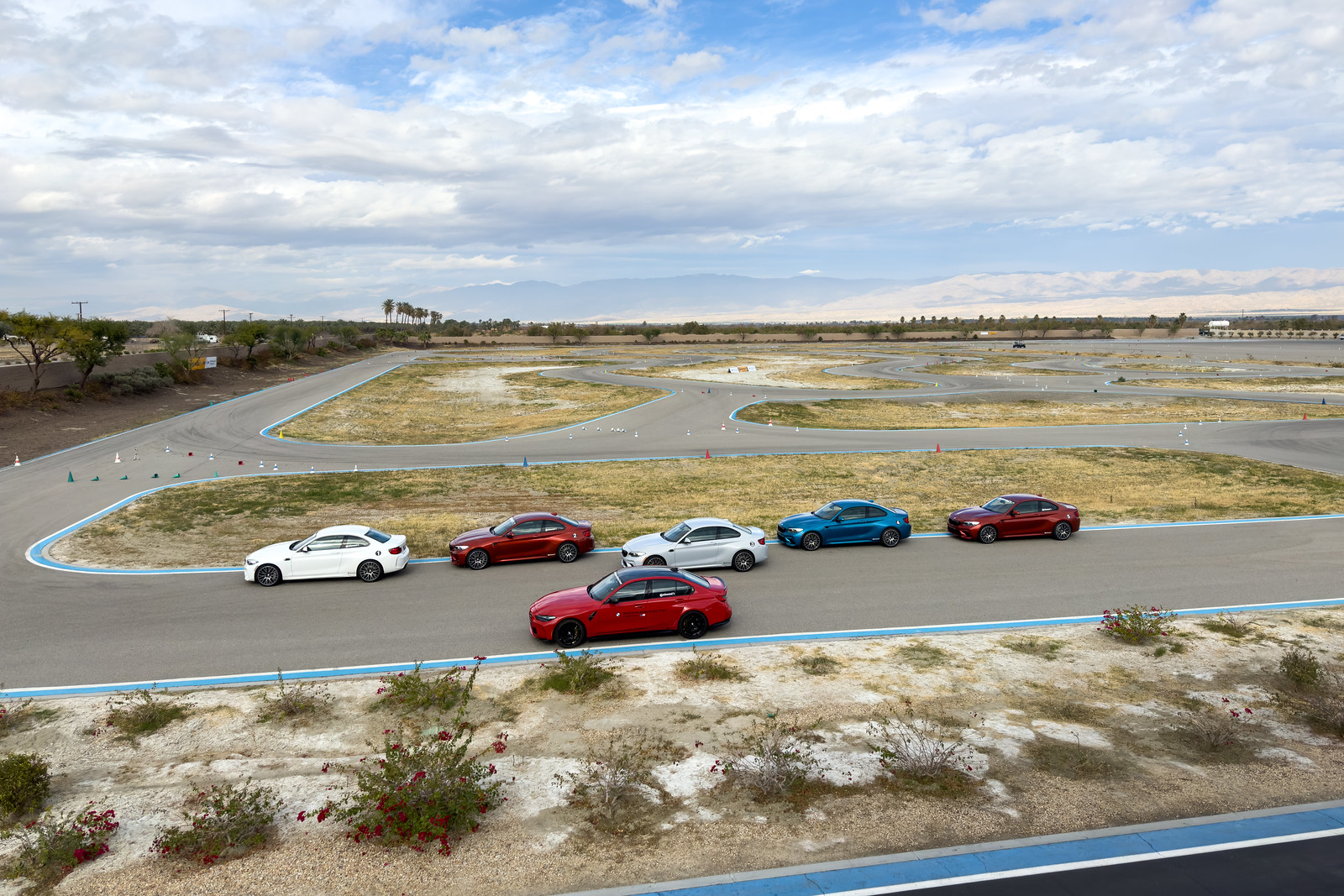 First exercise: M2 handling course. This was familiar for me, the same cars running the same layout as last year. The M2 feels dynamically last-generation when driven back-to-back with the M3 and M5 in two ways. First - the M2's steel brakes take appreciably longer to come up to temperature than the ceramic brakes on the M3 and M5, and you'll do well to remember that coming into the first big braking zone. Second, the TCS and driver aid systems are markedly less sophisticated than on the M3. In the M2, when you ask too much of the motor when traction is not available, the penalty is a harsh, immediate cut in engine output. In the timed autocross this will kill your run. In the M3, the driver aids are much more subtle, and you can just detect them nibbling away at your power delivery, but in a much less binary way than the M2. Of course the M2 is an excellent car, I'm nit-picking. You could argue that the M2's system makes you a better driver by doling out harsher penalties for bad driving practices. 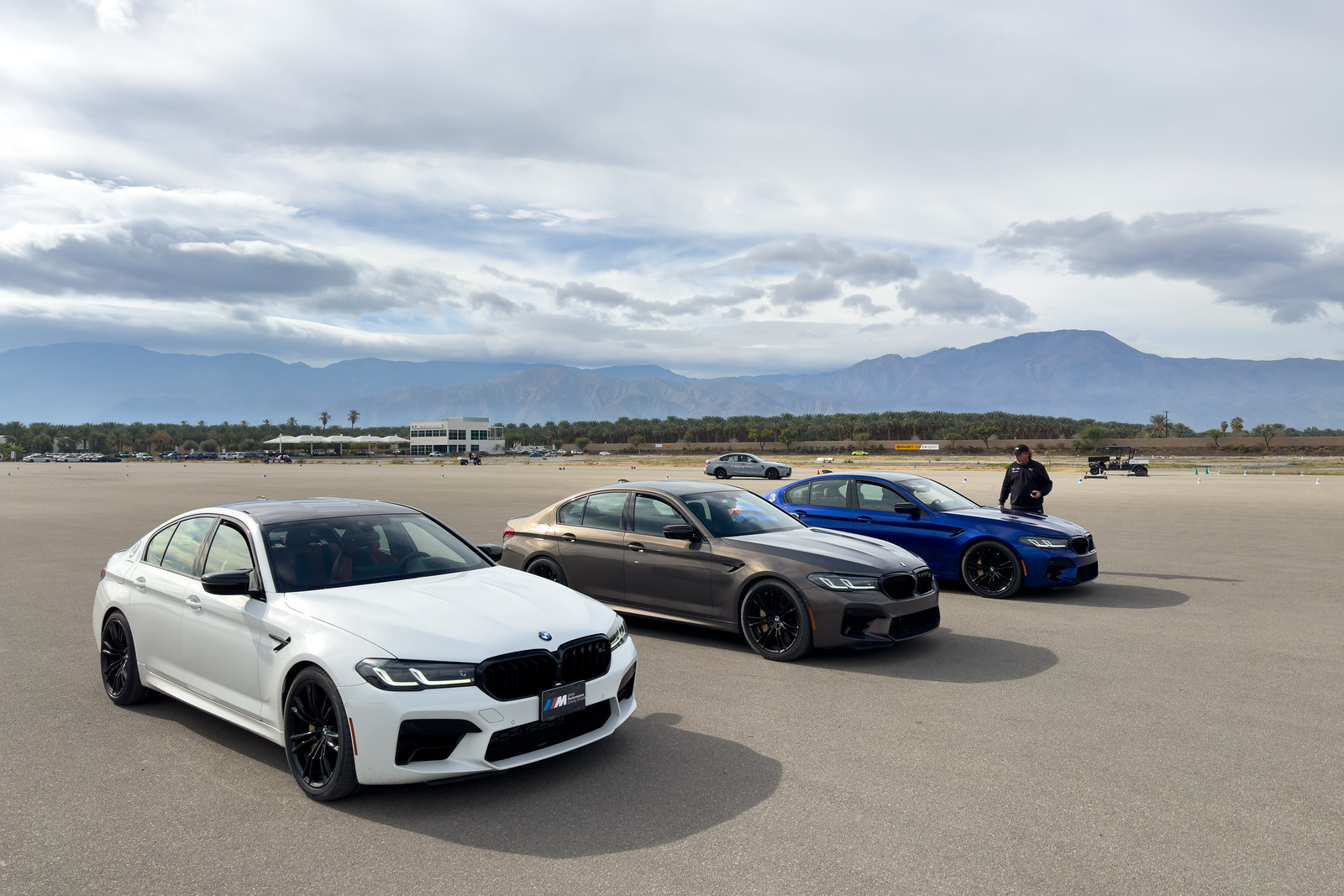 Second exercise: M5 on the polished concrete skidpad, set to RWD with all driver aids deactivated. This was the most frustrating exercise for me last year, because I wanted to be great at it, and I was not great at it. In 2022 I just couldn't get into a sustained controlled slide. This year, with the benefit of past experience and a recent visit to rally school, I got the hang of it. The key to my improvement was a skill learned at Dirt Fish: patience. Blip the throttle to break traction; counter steer; be patient and wait a beat while the car takes a set and is on the verge of regaining traction; then apply throttle to maintain that balance in a controlled slide. Last year all of my inputs were too fast, too much, because it feels uncomfortable to have the back end swing around like that. But once you acknowledge that momentary feeling of discomfort, and understand that it's required to let the car adjust its attitude - you can regain control. By the end of the exercise I was circling the skidpad continuously and playing with throttle and steering angle to see how much I could hang out the back end. SO fun once I got it. 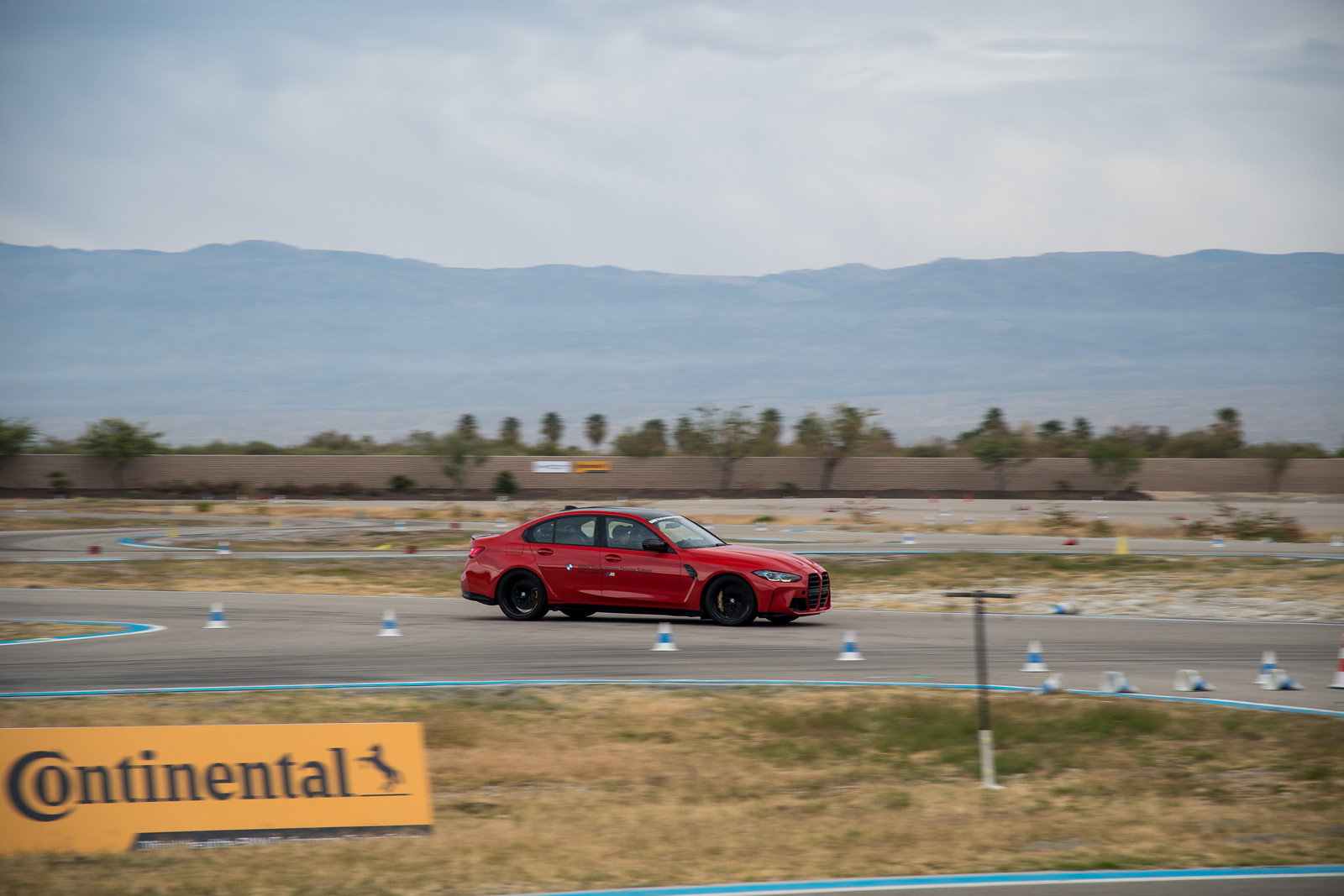 Third rotation - corner exit speed in the M3. This was an interesting exercise, new for this year (last year this was another lead-follow session on track). The goal was to convey the idea that corner exit speed is of paramount importance, and corner entry speed is actually a minor factor in overall pace. We took a simple right-hand corner repeatedly, running through a speed gun about 100 yards past the apex. It was informative to get immediate feedback on pace through a corner, and repetition helped me focus on vehicle positioning, smooth brake release, and rolling into the throttle in concert with reduction in steering angle. 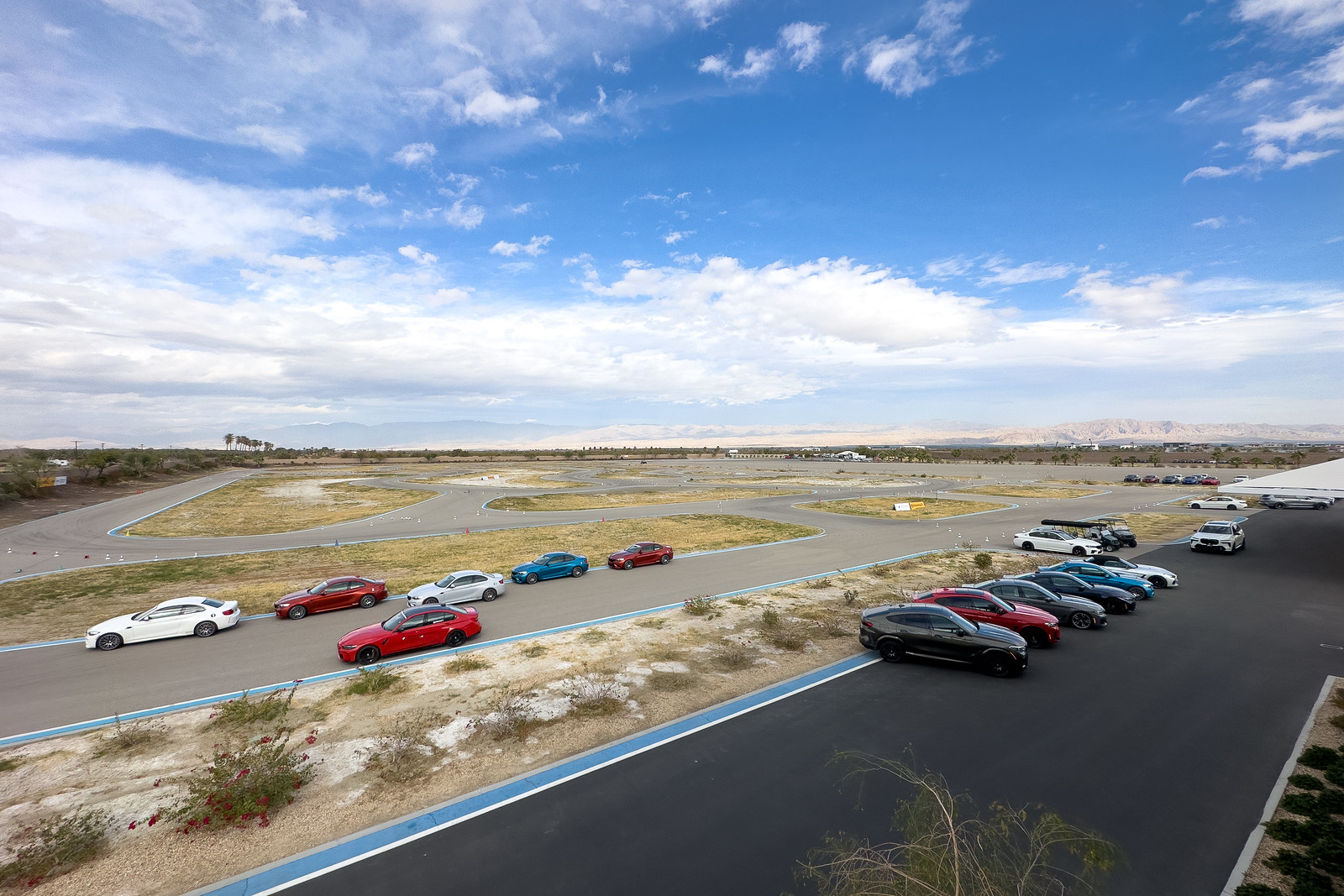 After the morning's three exercises, we took a break for lunch. 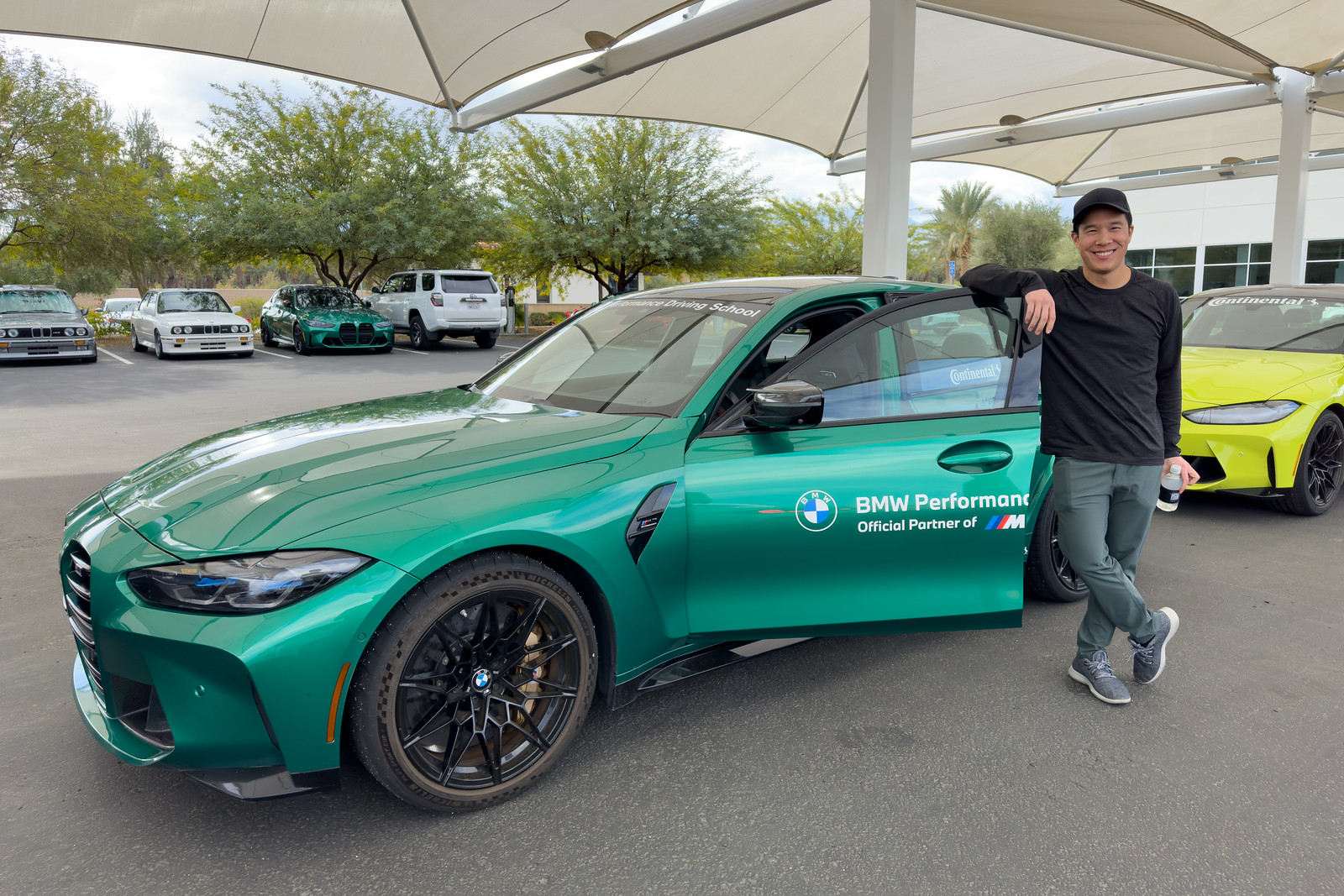 The afternoon exercises offered a chance to deploy what we'd learned in the morning. Our fourth rotation on the day was a lead-follow session in the M3 on the Desert Circuit of the Thermal Club. Due to a small group size, Kevin and I were able to run at essentially full pace behind our instructor. I went into detail in last year's write-up, but to reiterate, the G80 M3 is unreal on track. 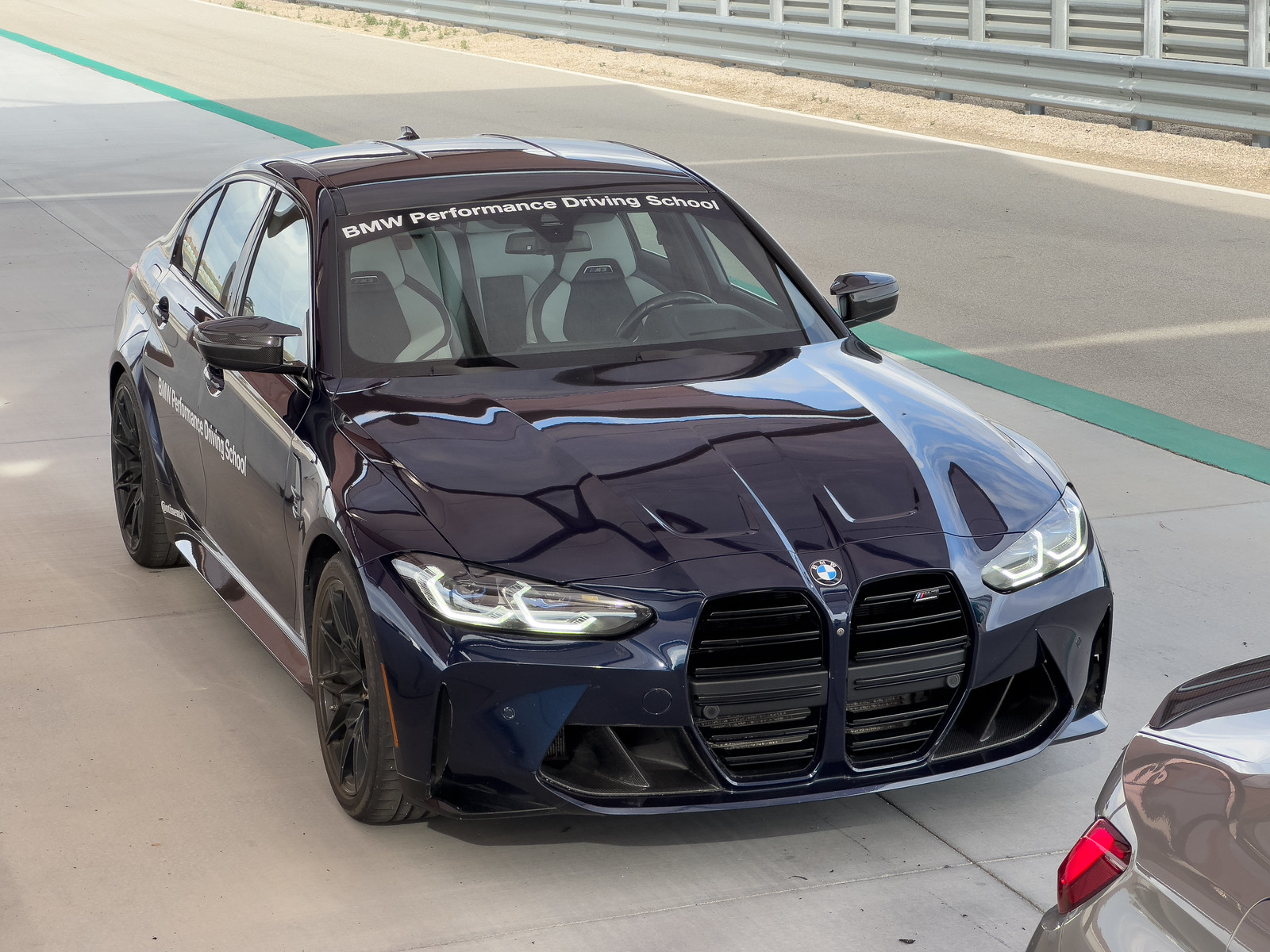 Just imagine if they'd made it good-looking. Oh well. Prohibitively expensive to purchase or run for me in any case. 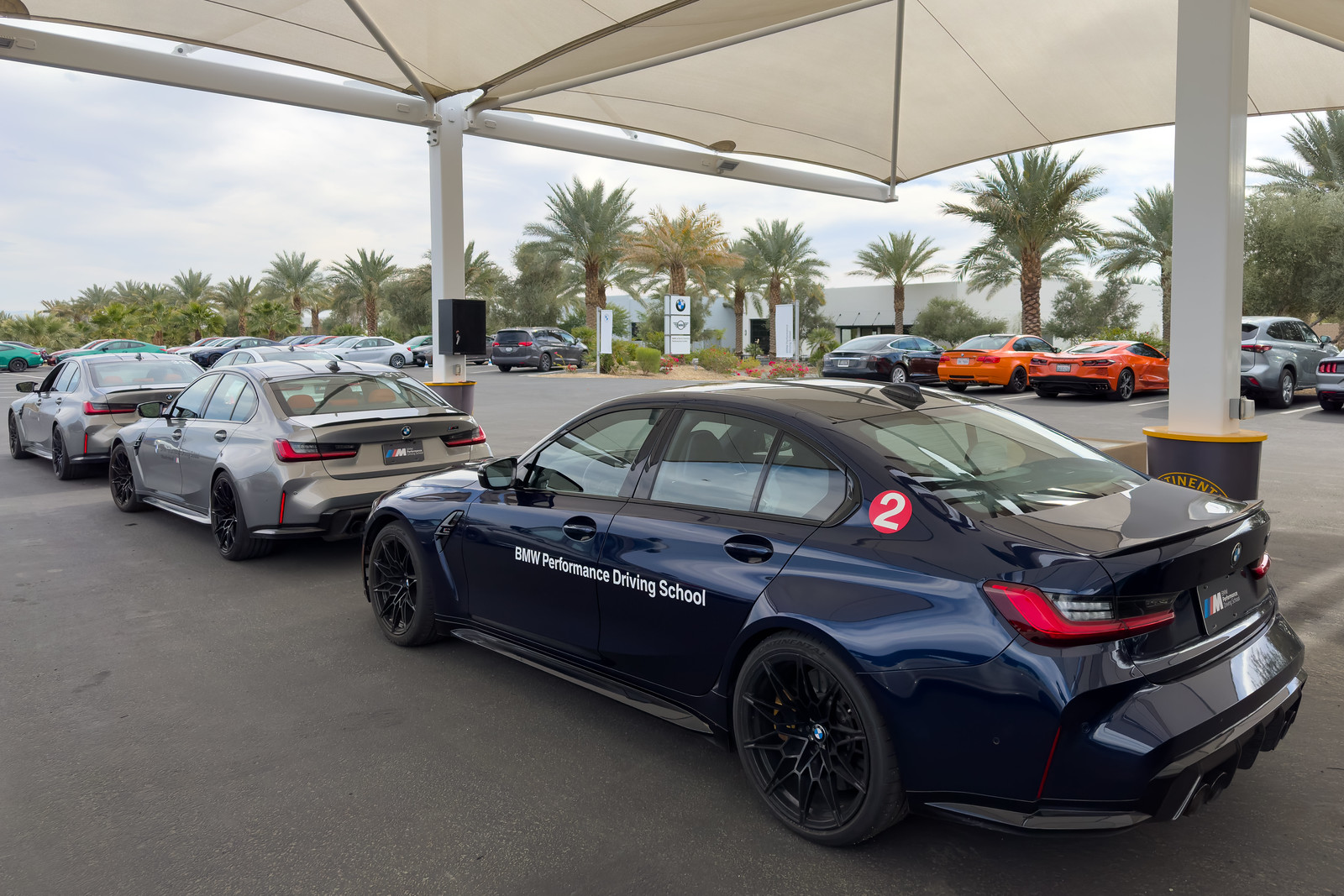 Next up: the Rat Race. The instructors set up a diamond configuration of cones on the polished skidpad - two points wide, two points tight. Students compete head-to-head in a bracket tournament, lining up their cars opposite one another and then racing to complete three laps first, all moving in a counter-clockwise direction, one car trying to catch the other. The M5s once again have all aids and AWD turned off, so it's about managing traction and rotating the car to allow for short straight-line bursts of speed. Kevin bested me in our practice run, but we matched up in the group 'grand final' (only four of us to start with, ha). Our race was so tight that we went into multiple sudden-death overtime laps, and I eked poor Kevin right at the line.
Note: last year we did what the instructors referred to as the "Rat Race XL," which was generally the same concept but much larger, and NOT on the low-friction surface. I enjoyed that version but apparently the instructors find it nerve-wracking. I can sympathize, the speeds are much higher than on the skidpad and in 2022 I watched M5s spinning across the asphalt like like very large, very fast tops. 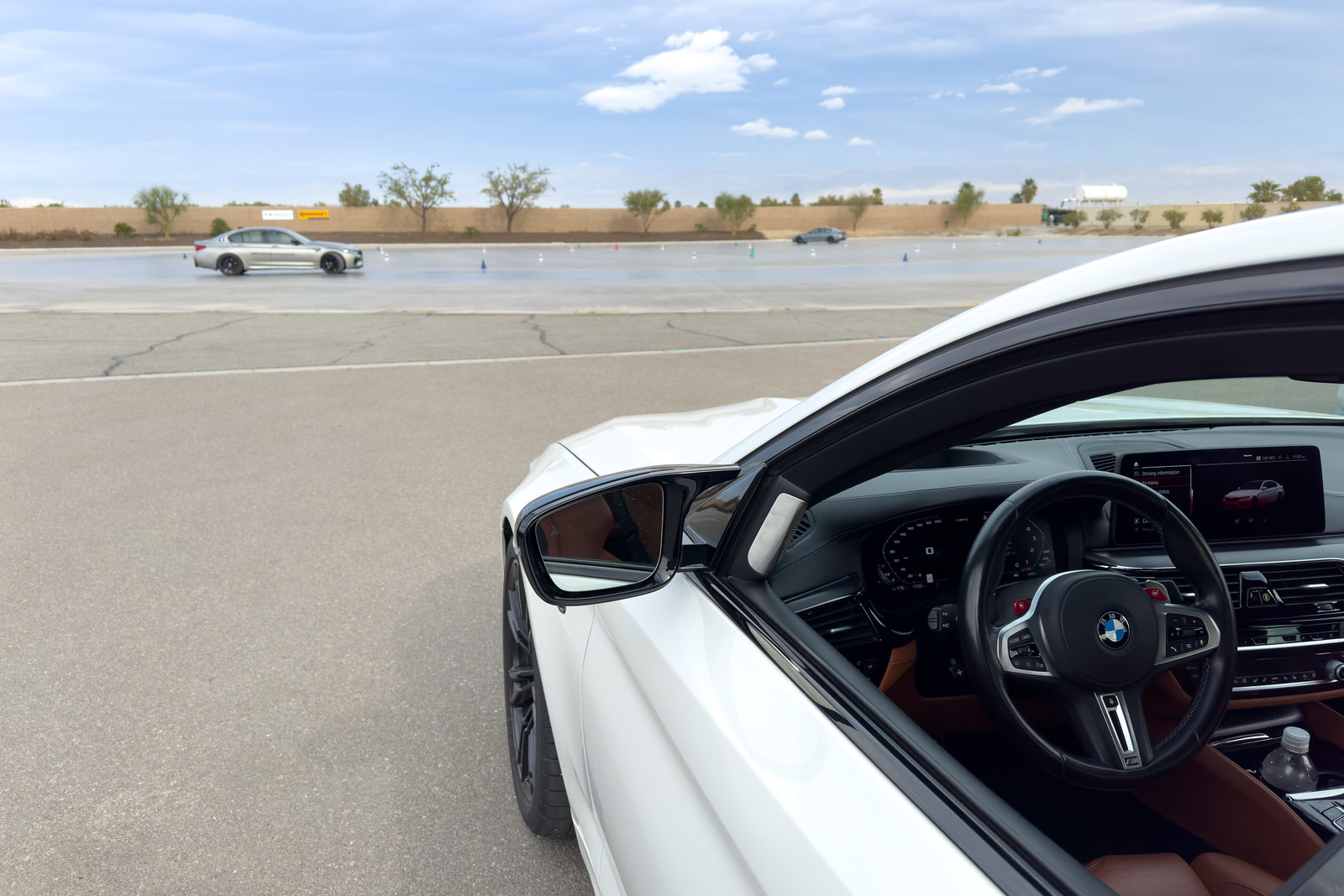 Our final rotation of the day was the timed M2 autocross. I leveraged the fact that I had essentially 2x the experience of anyone else in the class to claim top time of the day (sorry Kevin). Kevin was just behind me, and third place was claimed by our new friend Clark, who we discovered owns the Lime Rock M3. 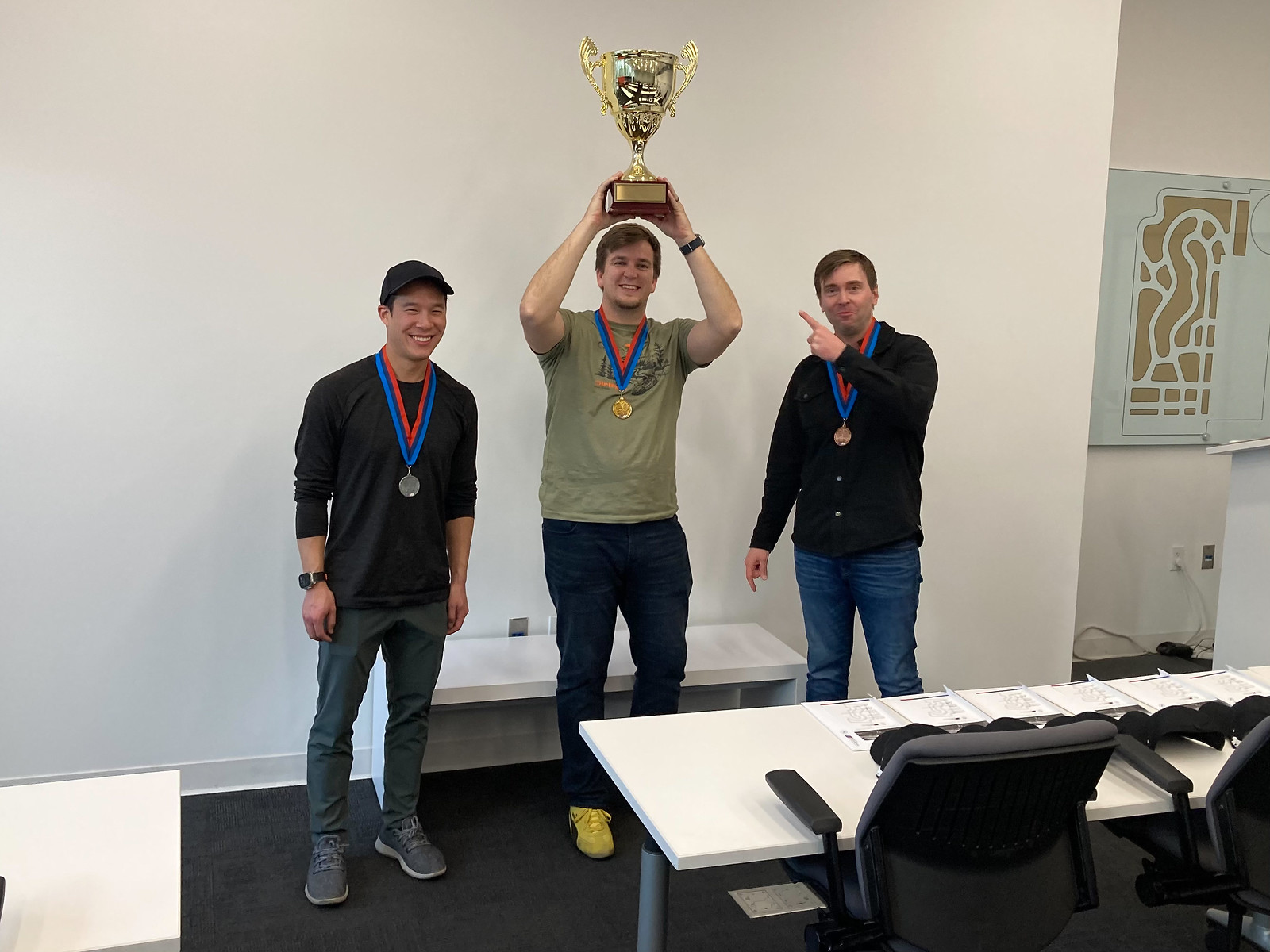 Photo credit: Case Montgomery
We kept the medals, but I handed back the trophy after this awkward photo was taken. A solid improvement from last year, when I missed P1 by 0.15 seconds. 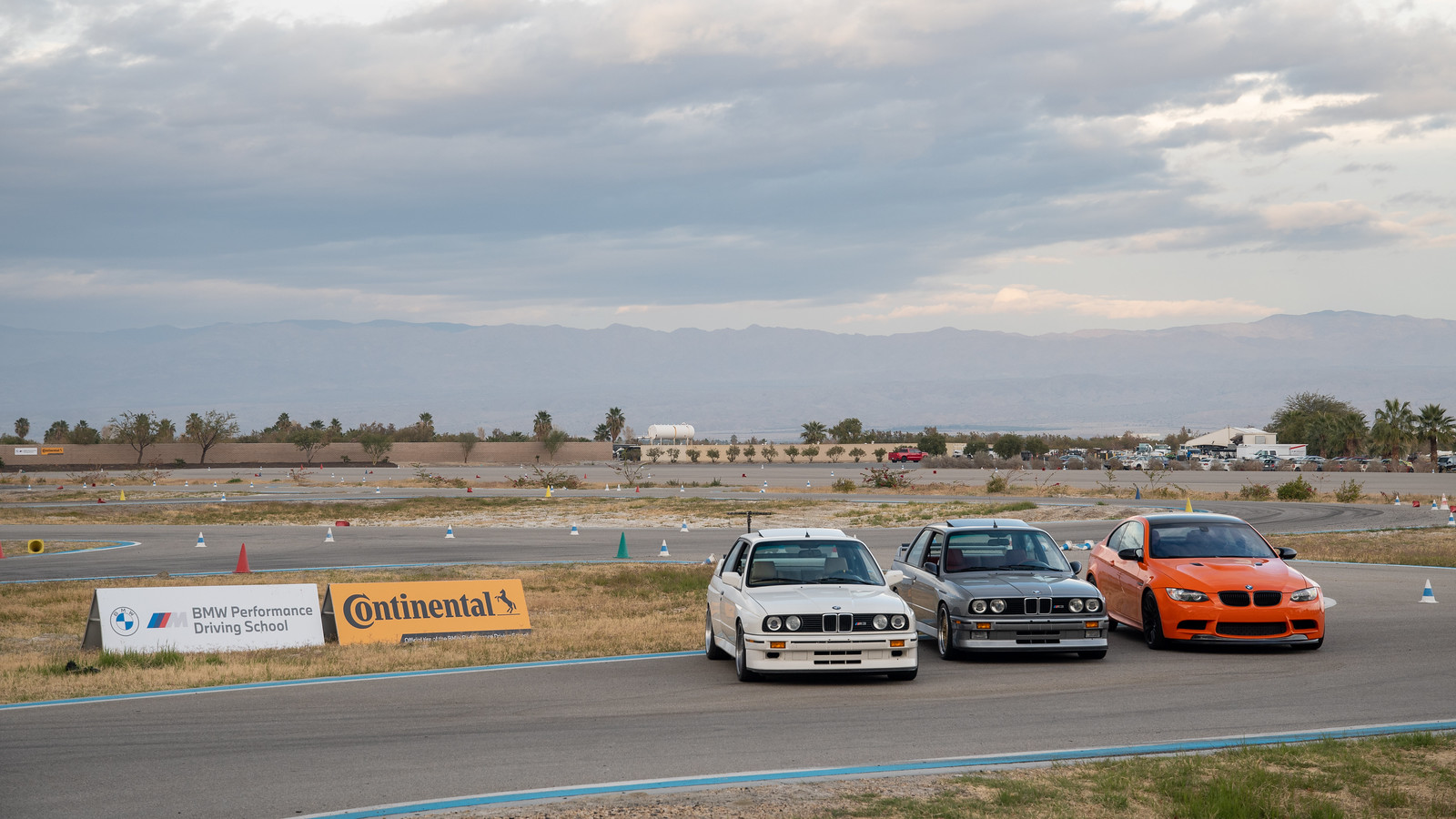 The day ended with distribution of some nice branded hats, and I bought a sticker for my helmet. The staff was nice enough to let us stick our M3s on the handling course for some end-of-day photos. 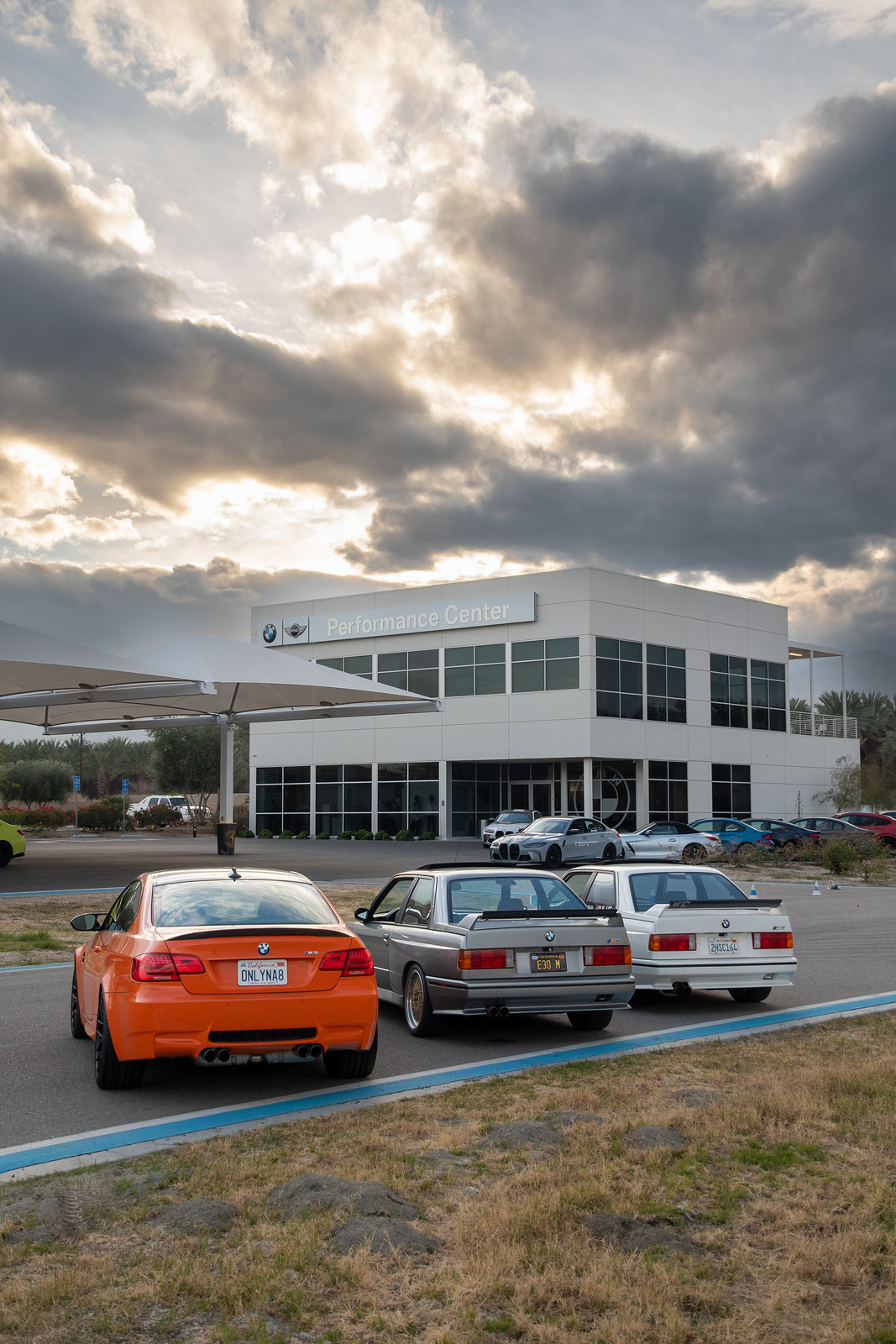 I've found myself in a bit of a "progression pickle," similar to what I experienced after my 2-day class at Dirt Fish. I love this 1-day itinerary, but I would also like to take things to the next level and continue building my skills. The instructors recommended Kevin and me for Advanced M-School, but it's a big cost jump. This one-day course costs $1750 - I paid $1400 with BMW's 20% Black Friday promotion. The two-day Advanced M School is $4695. Even at a 20% discount, that's about $3750, a huge chunk of change. There is no question that I'll have a good time, but how many HPDE track days could I get for the same money? What am I actually trying to progress toward by purchasing more expensive school packages? I won't be turning pro anytime soon. 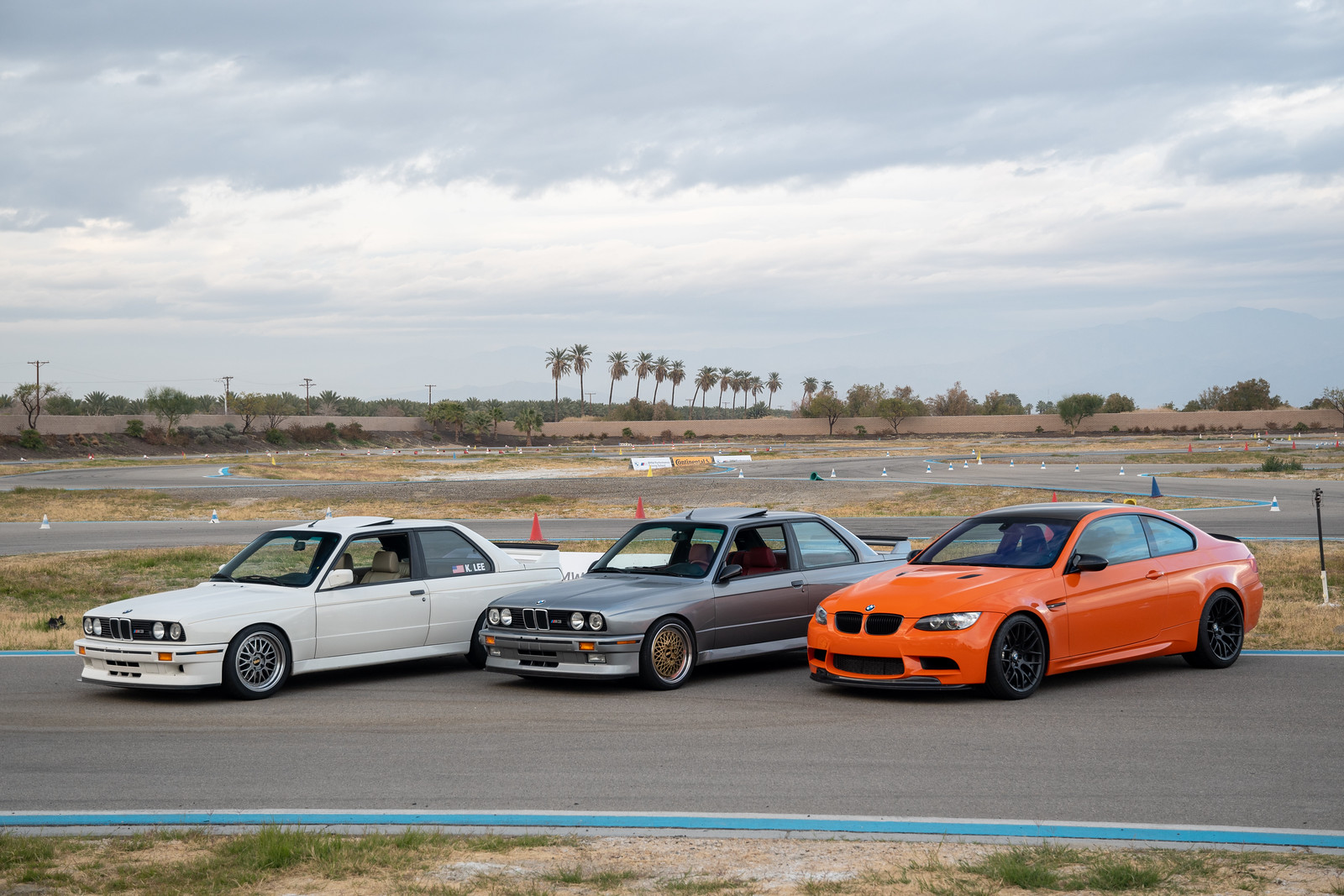 In any case - I love this experience, and I like the idea of making it an annual pilgrimage. I'll consider my options for 2024. 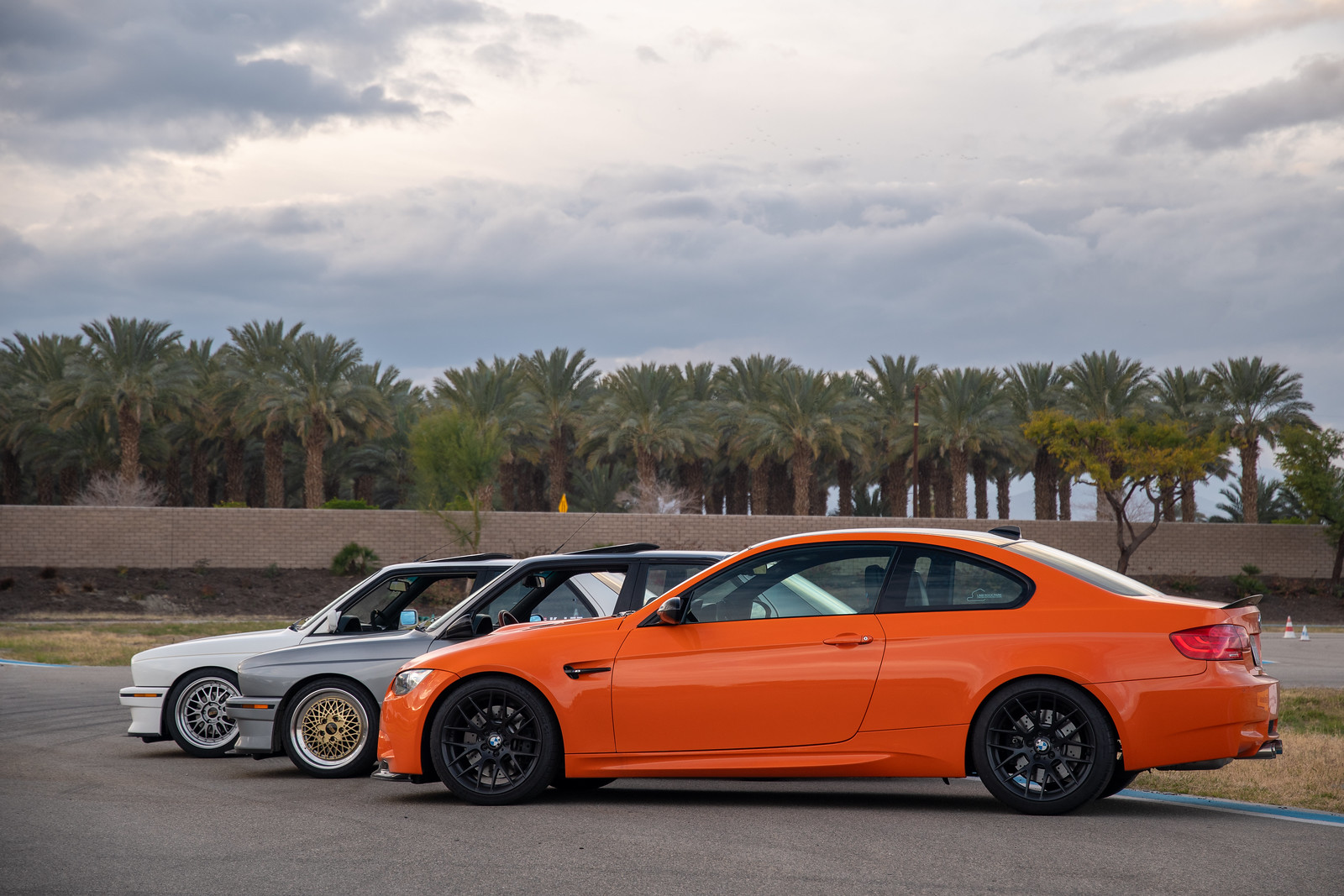