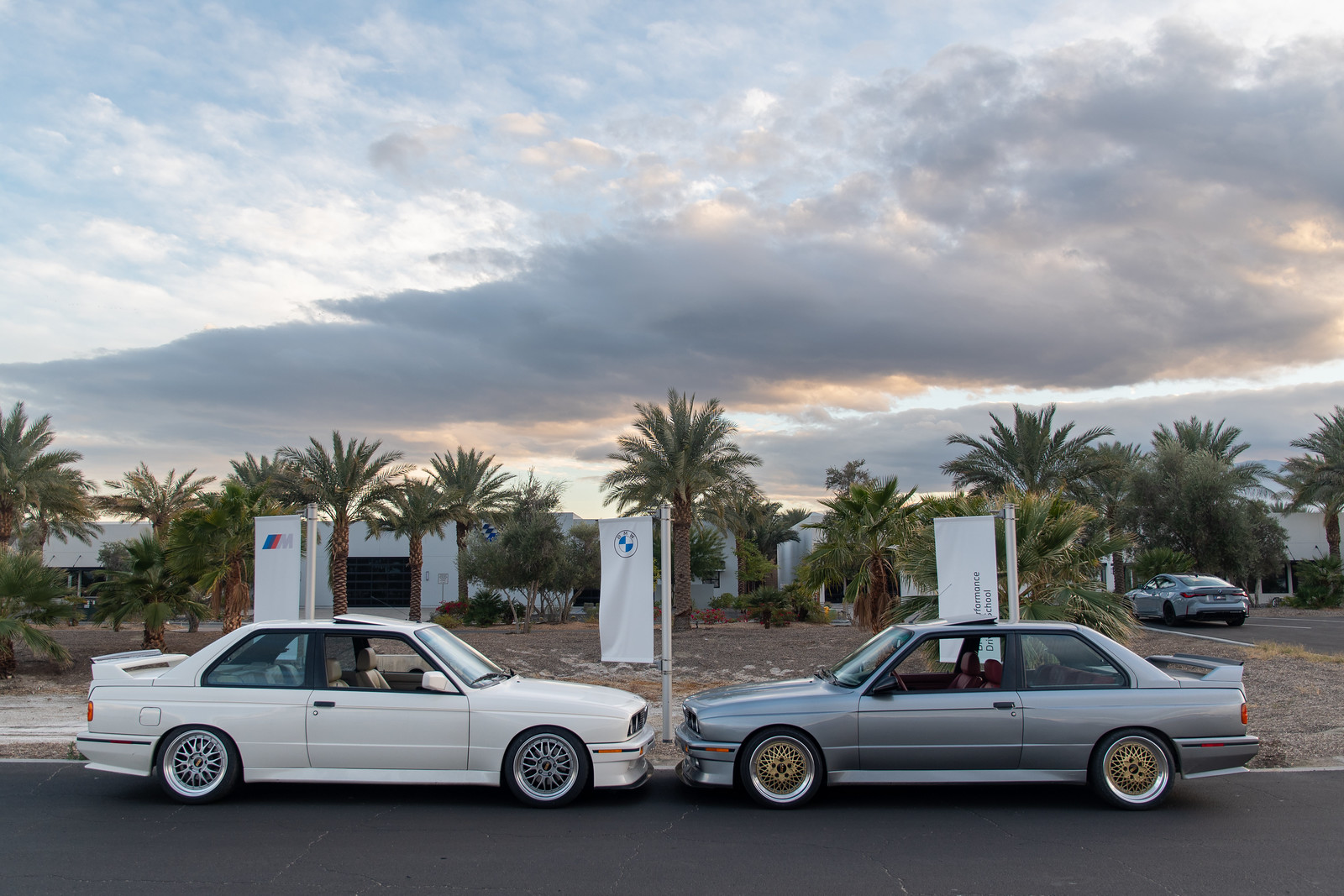 After class, we enjoyed dinner at 1501 Uptown Gastropub and watched UGA thump TCU in the college football title game. I spent the evening downloading photos, packing up, and preparing the route for the drive home.
Our grand ambitions for the return journey dimmed when we studied the forecast for Tuesday, which showed heavy rain everywhere between SF and Los Angeles. We decided it was wise to stick to the freeways and stay out of the wet as much as we could, but even then, we were bound to encounter heavy rain. California's roads, cars, and drivers are not equipped to deal with precipitation and I started to get nervous about the drive. My tires (Advan A052) are essentially autocross tires with very little in the way of water management. To add another concern, highway 5 can be icy over the Grapevine pass in the winter months. 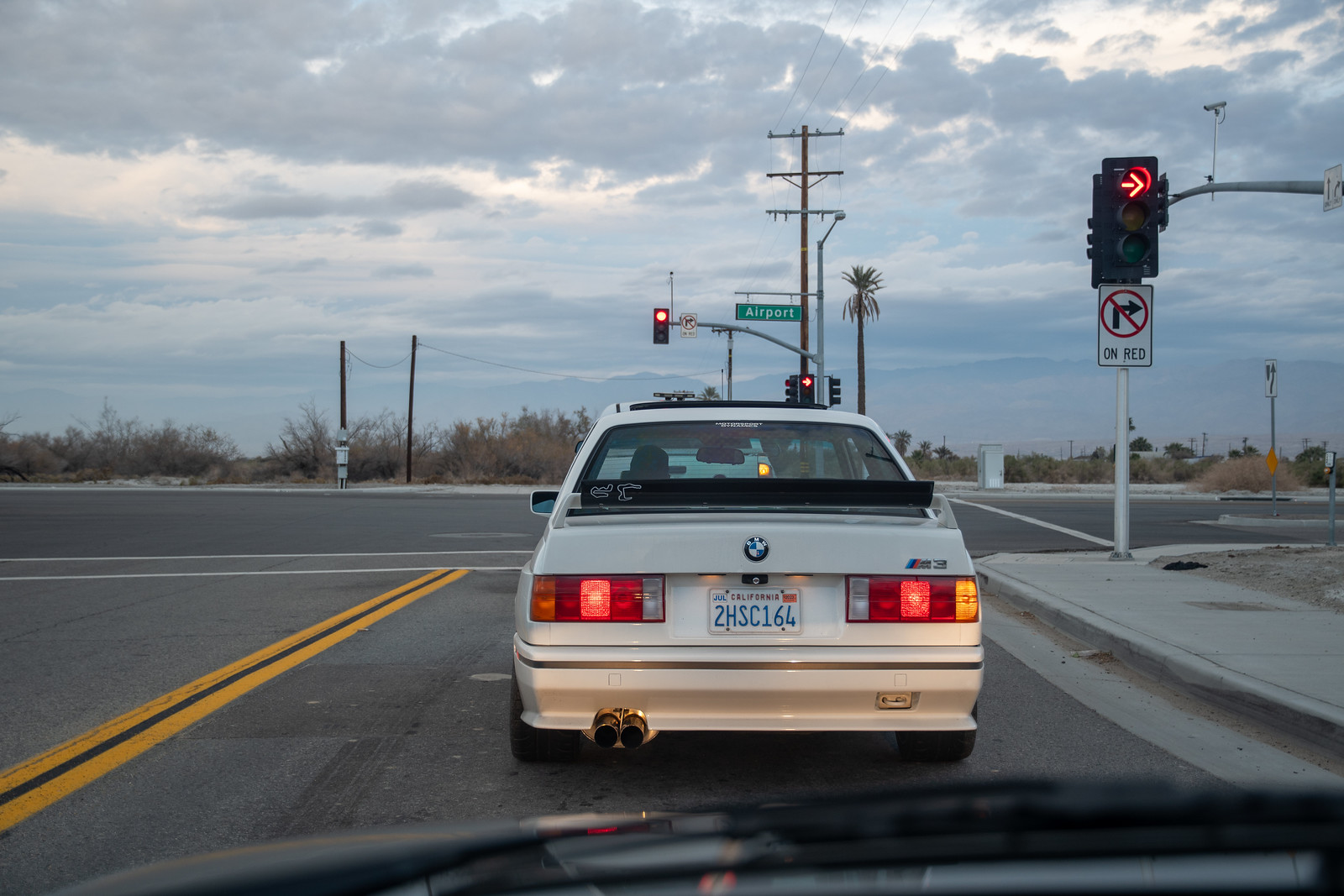 So with some trepidation, off we went on Tuesday morning. What began as a dry morning in Palm Springs quickly gave way to drizzle, full rain, and finally full deluge conditions. On reflection I think this is the most nerve-wracking piece of driving I've ever done. For one particular 15-minute stretch on 210 west the M3 was essentially aquaplaning continuously. Traffic, which was thick, slowed to 40mph and it was full-tilt wipers to deal with the rain and the spray from the other cars. I had to shut off the music and start talking aloud to steady my nerves: eyes high, relax the shoulders and arms, light controlled grip, maintain safe distance and don't make any sudden moves. The M3 skidded around in little fits and jerks. Kevin's car, eager to add to the excitement, had one of its headlamps go out.
Mercifully the weather broke, and shortly after we joined highway 5 north. I really do have to commend the A052s - for what they are, they did a surprisingly good job. I expected to hit a patch of wet pavement and pirouette into the center median, but instead it was mostly OK with some small pockets of "controllable" aquaplaning. If such a thing exists. 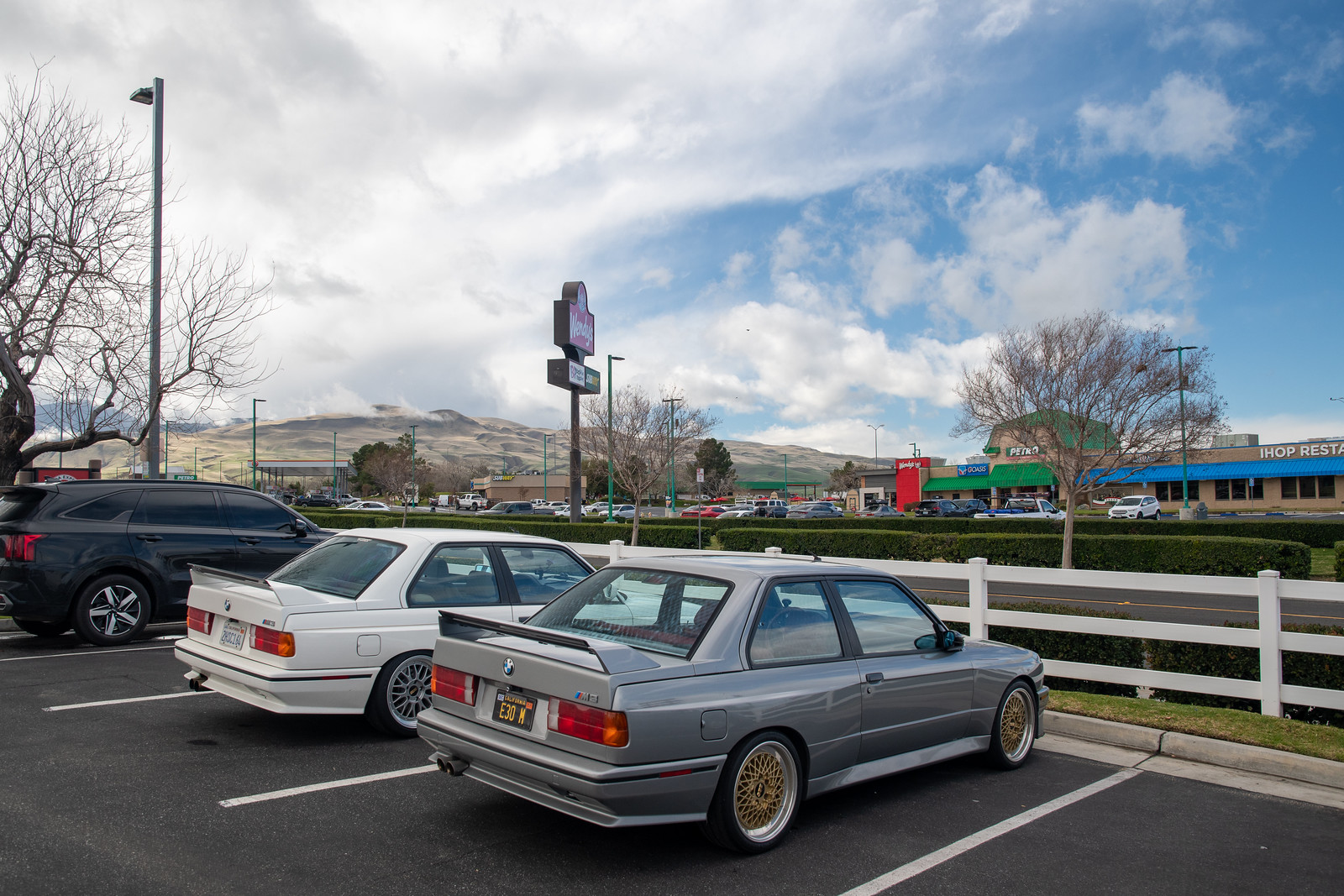 The opening 3-hour stretch was so fraught that I didn't dare take a photo of the conditions, or indeed do anything that required taking my hands off the controls. So our first photo of the actual drive is from our lunch stop in Wheeler Ridge. 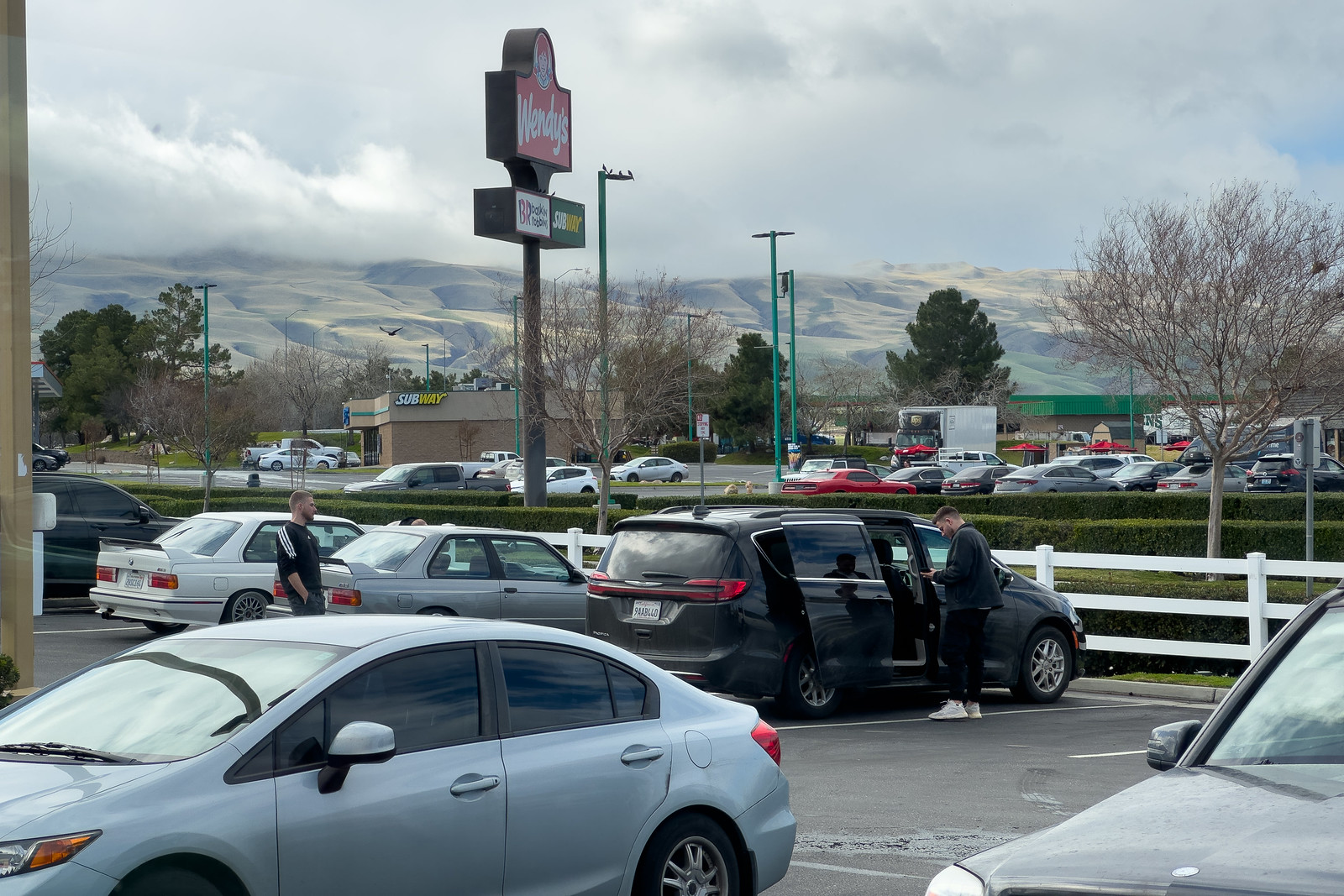 The M3s drew attention from some tourists in their Pacifica rental. 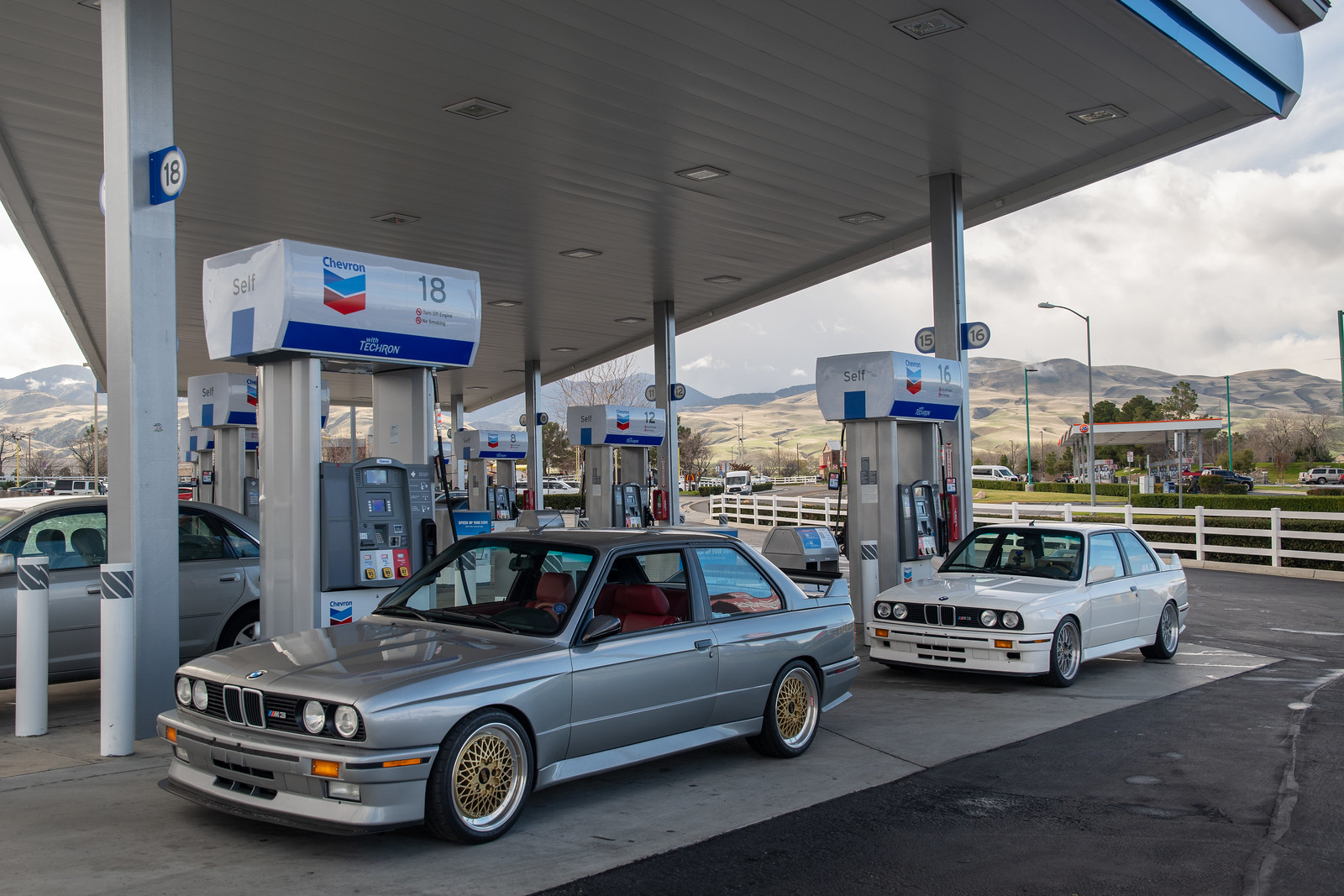 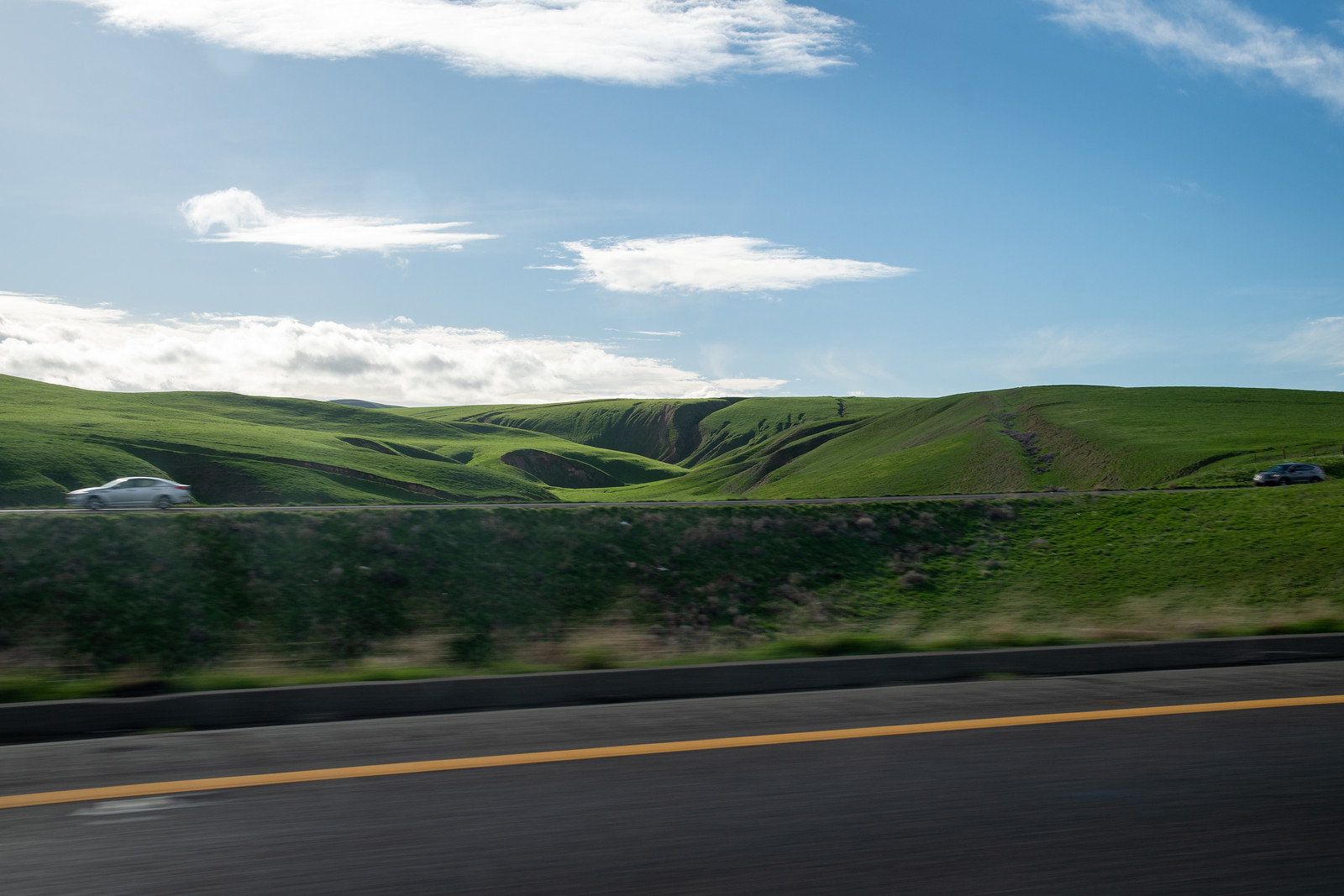 From there we were graced with generally clear weather. I-5 was its usual terrible self with long lines of semis and longer lines of people who don't know that the left lane is for passing. The wet January made for uncharacteristic and lovely green scenery. 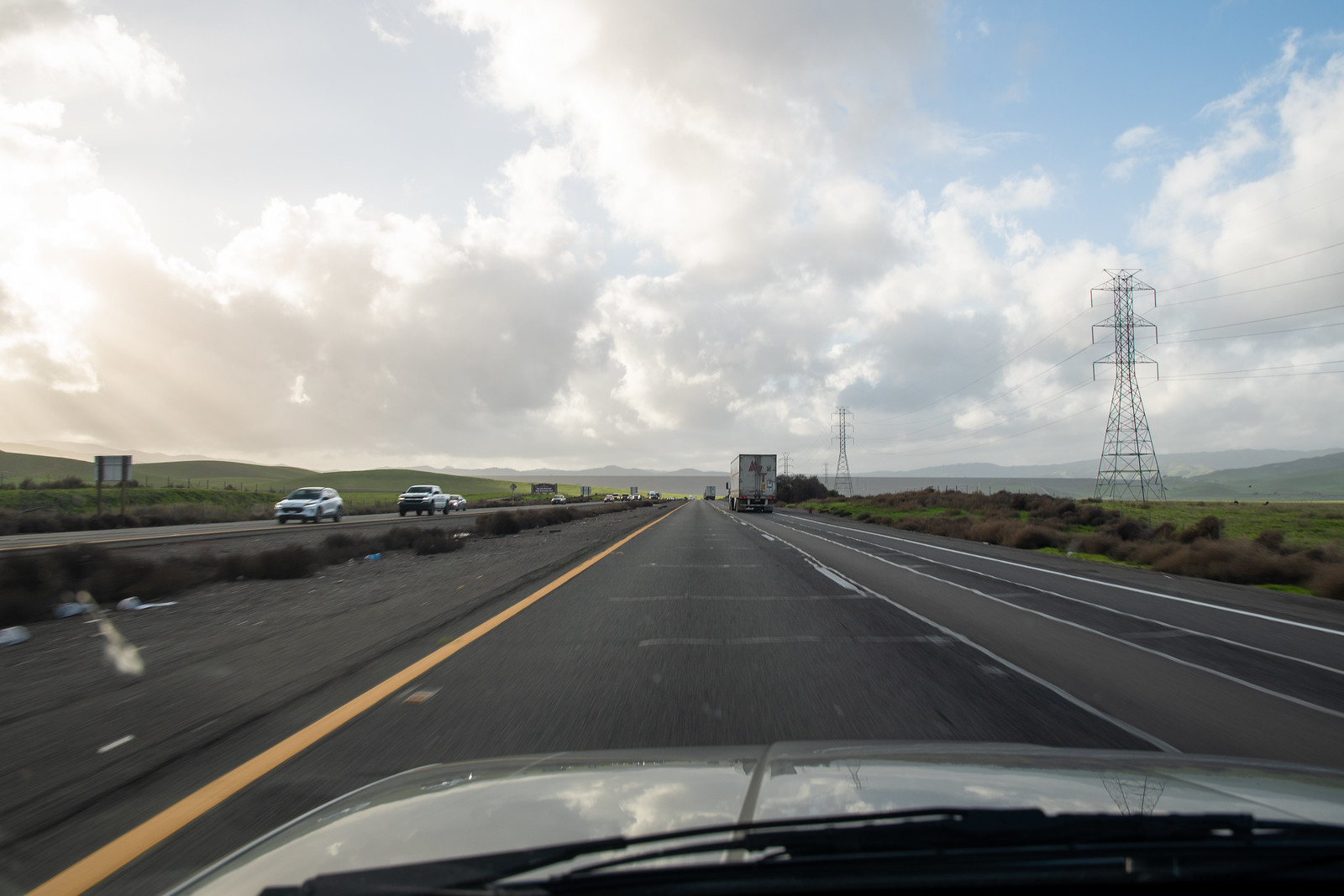 We made our final gas stop in Santa Nella, where CA-152 connects I-5 to the 101. With a little more than an hour left on the drive, I felt like a horse turning home for the stable, picking up pace. 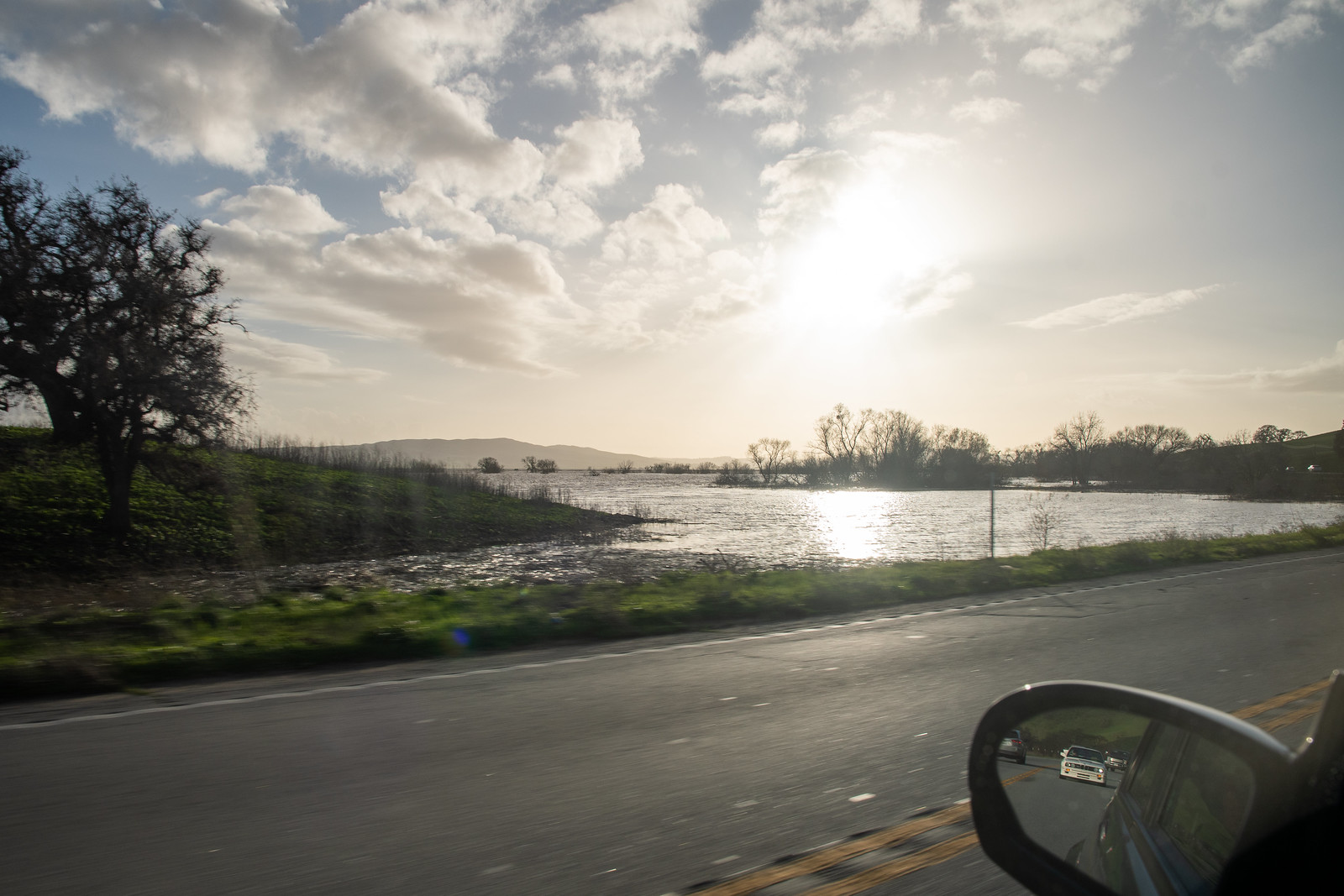 These next three photos were taken in Gilroy. There is not supposed to be a lake here - this is flooding from the winter storms. 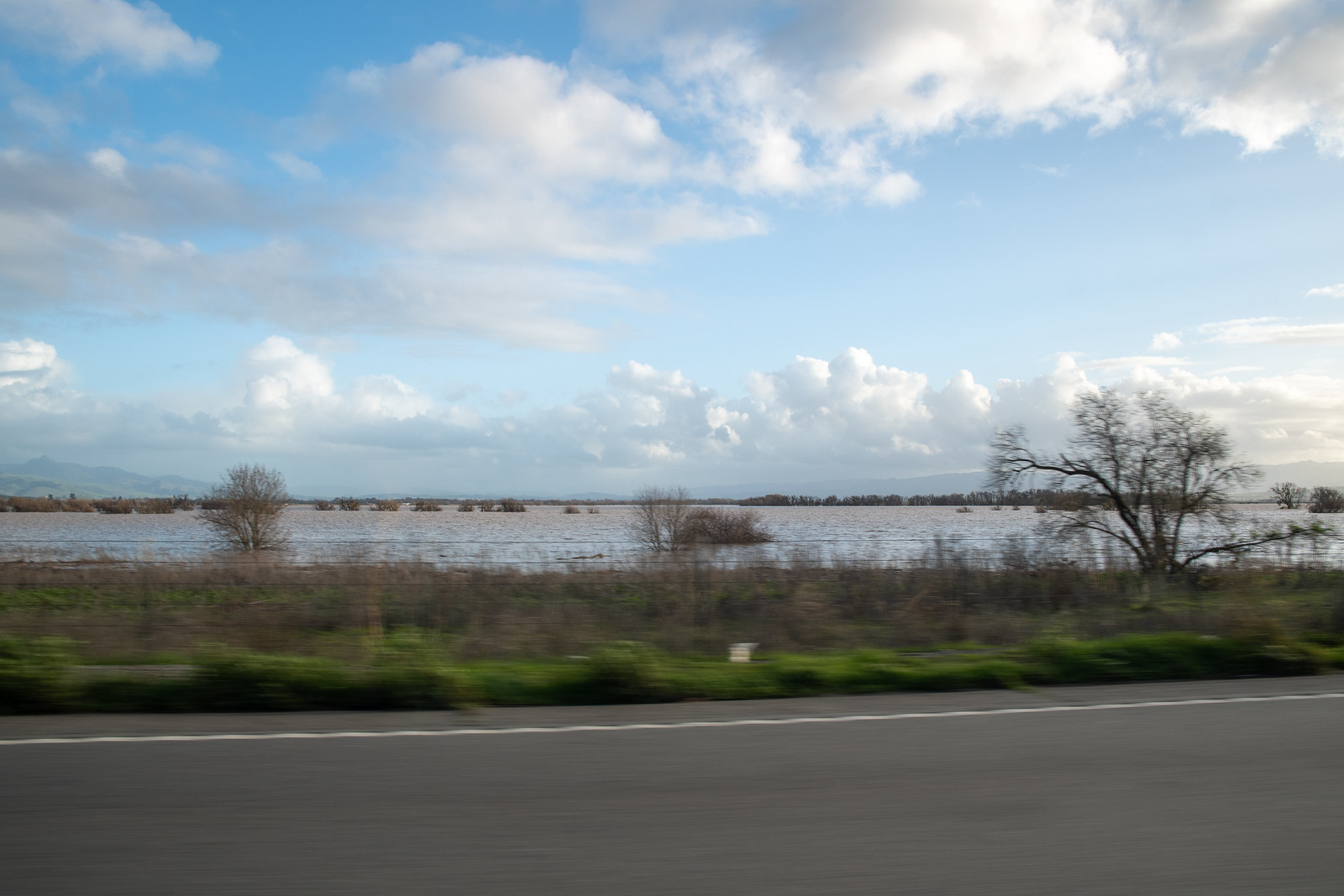 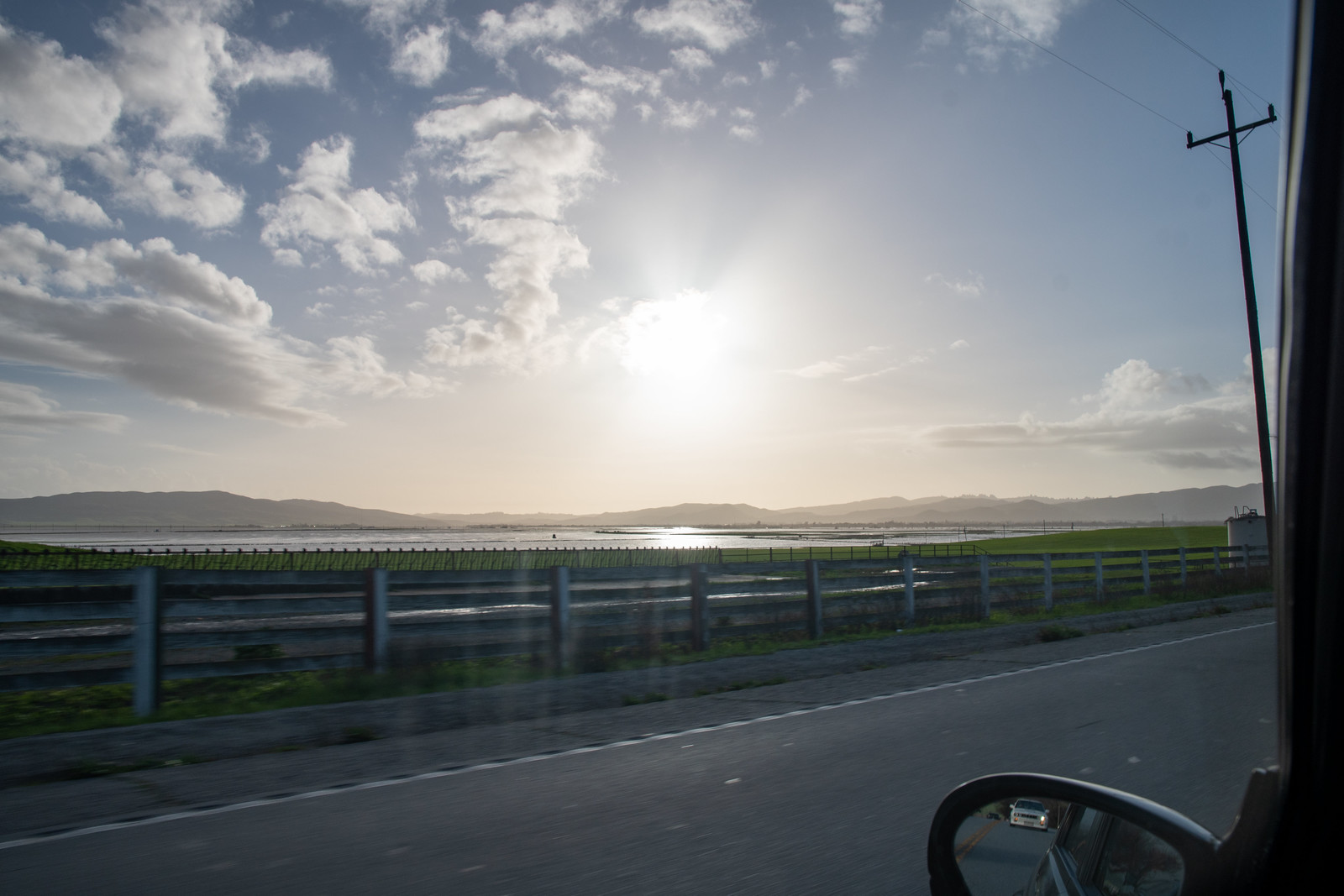 Triumph - at about 4.30p we returned to my house... where the power was out. We'd just finished gathering candles and headlamps when the power returned. 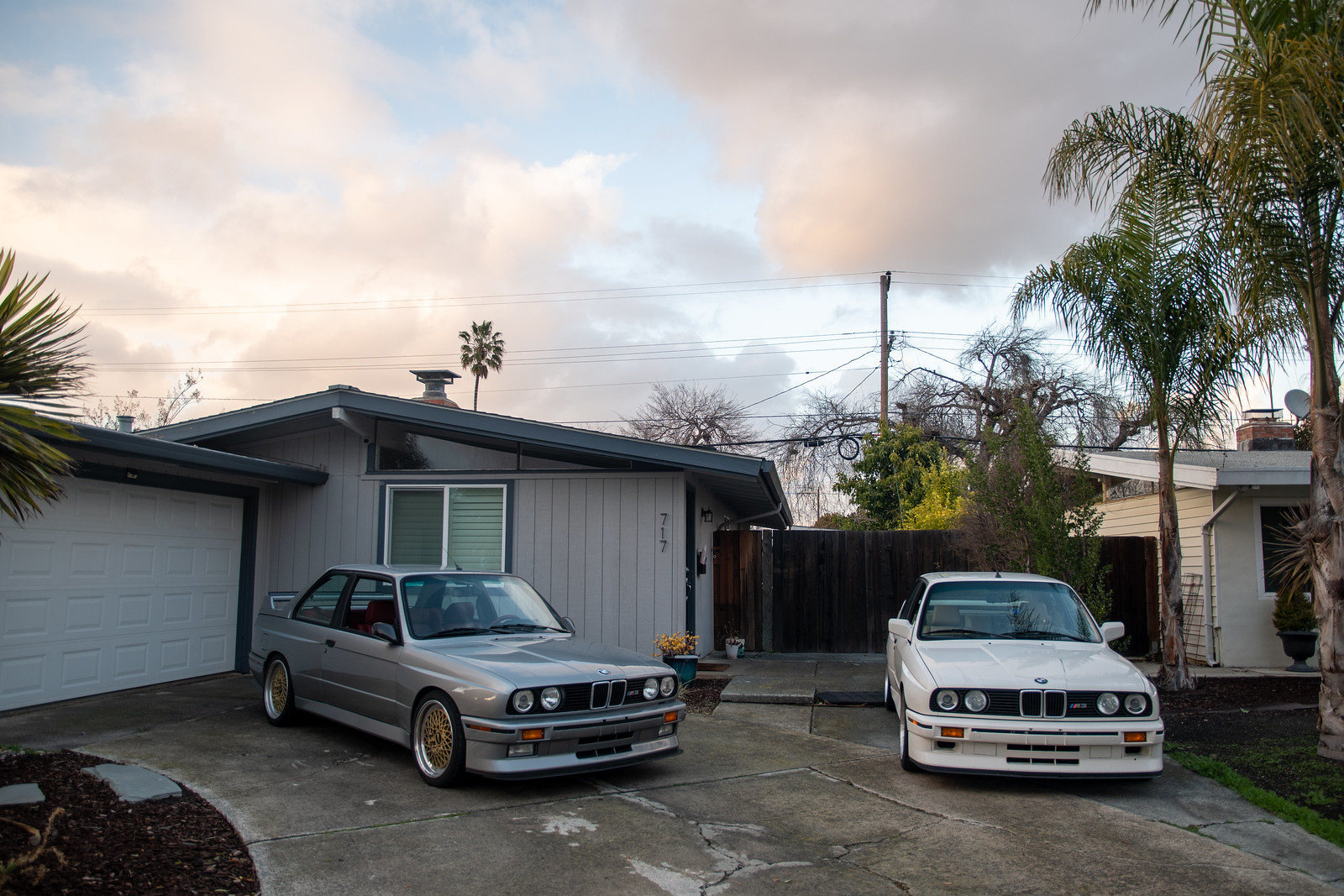 So - success!! With the motors switched off, we were right back where we started, but with 1250 new and exciting miles on the odometer, and a couple of very dirty cars. 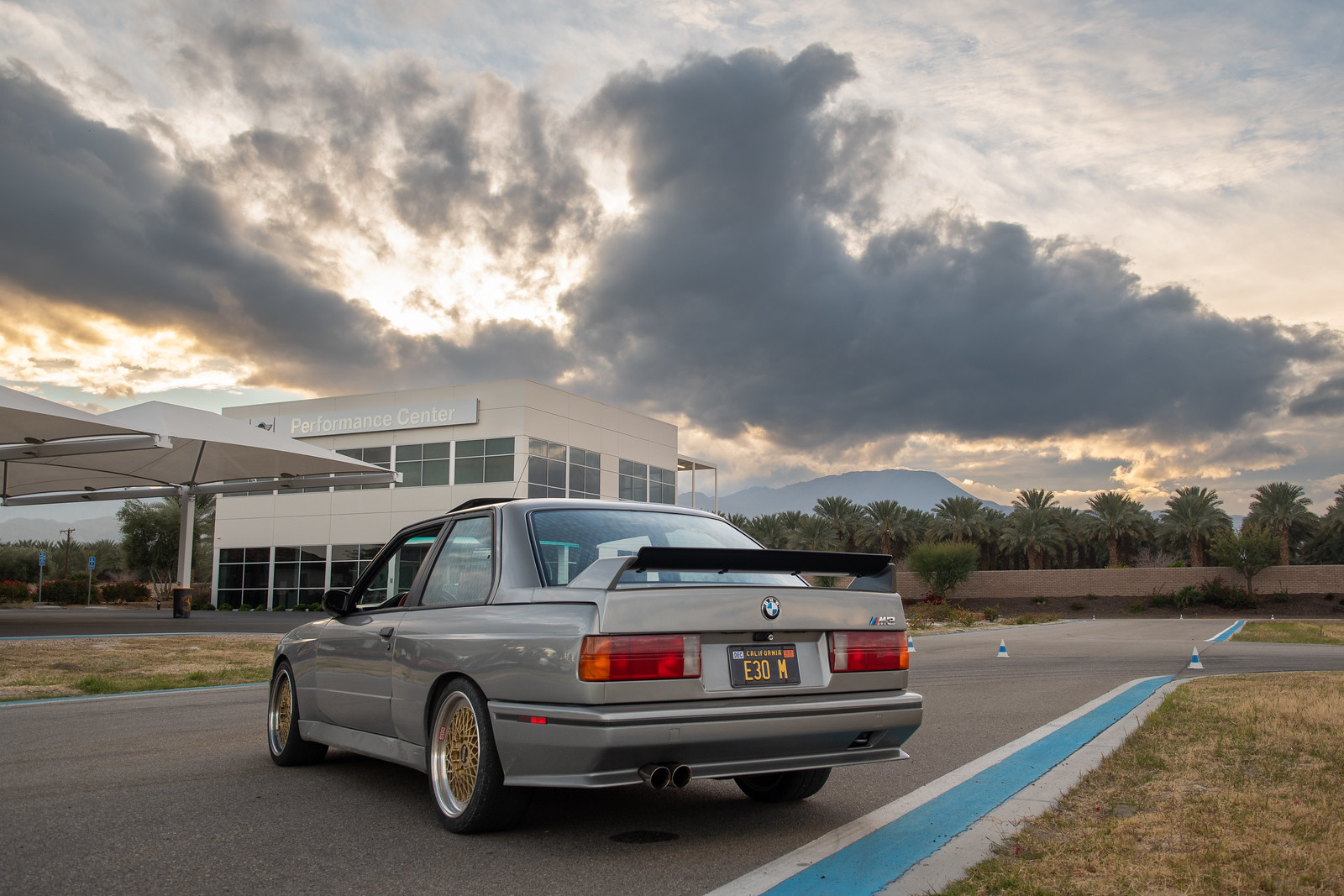 The car performed extremely well - in fact I had no issues at all. For that I have to thank Josh Johnson of HMB Motorwerks in Sacramento, who built my motor, overhauled my entire rear subframe, and just generally takes wonderful care of my car. I drive my car is intended; that is, to redline once it's properly warmed up and the conditions are appropriate. On this trip the car handled that along with the long stretches of freeway on cruise-control, the aforementioned crazy weather conditions, and multiple stop-starts for photo ops. 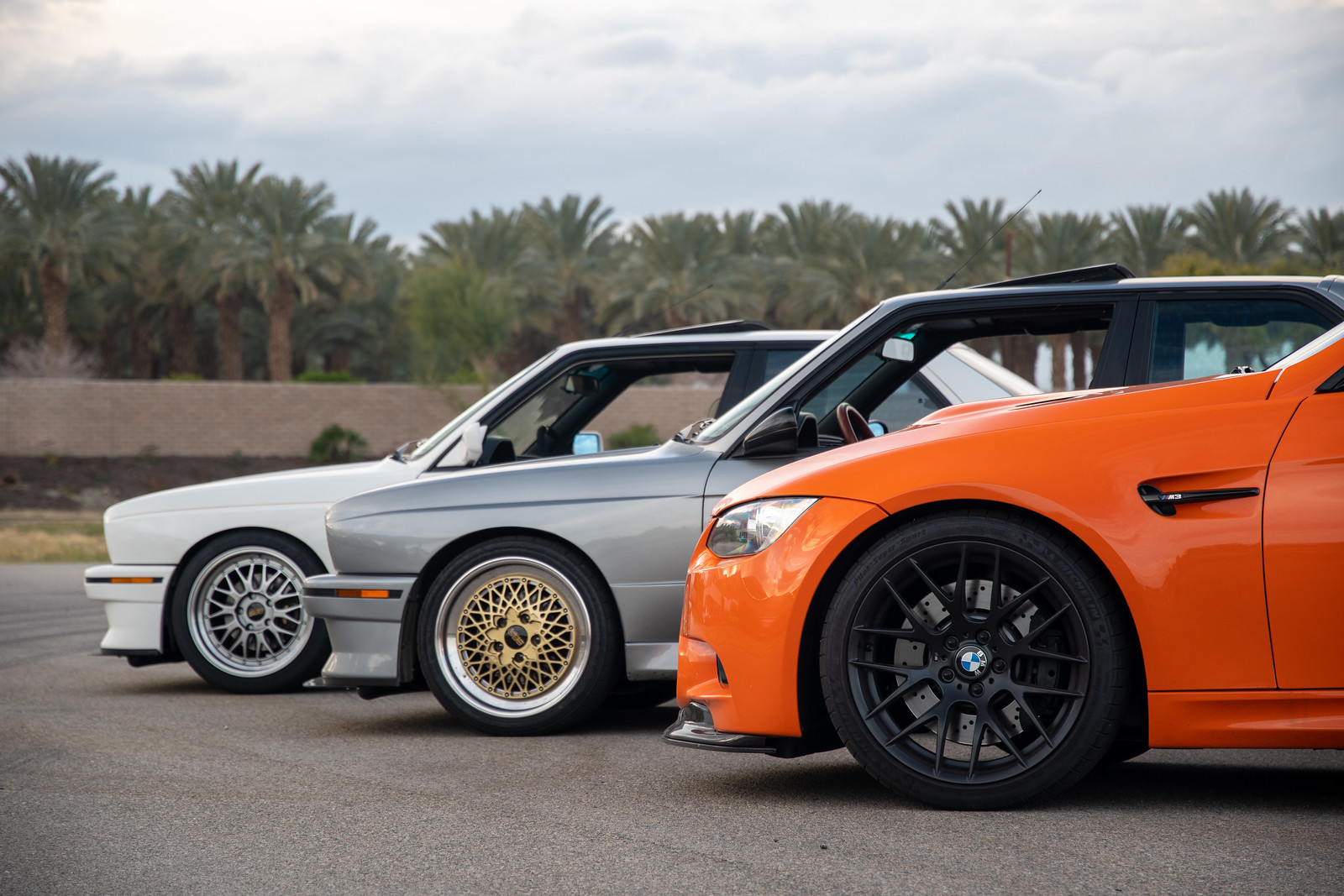 Old and specialty cars can be a hassle, but as they say 'the juice is worth the squeeze' and these cars bring richness and color to my life. Kevin is just one of the great and lasting friends I've met through E30 M3s, dating back to my first car in 2015. I could have made this trip solo - I did it last year - but it was so much more enjoyable doing it together with Kevin, who has become a great friend. 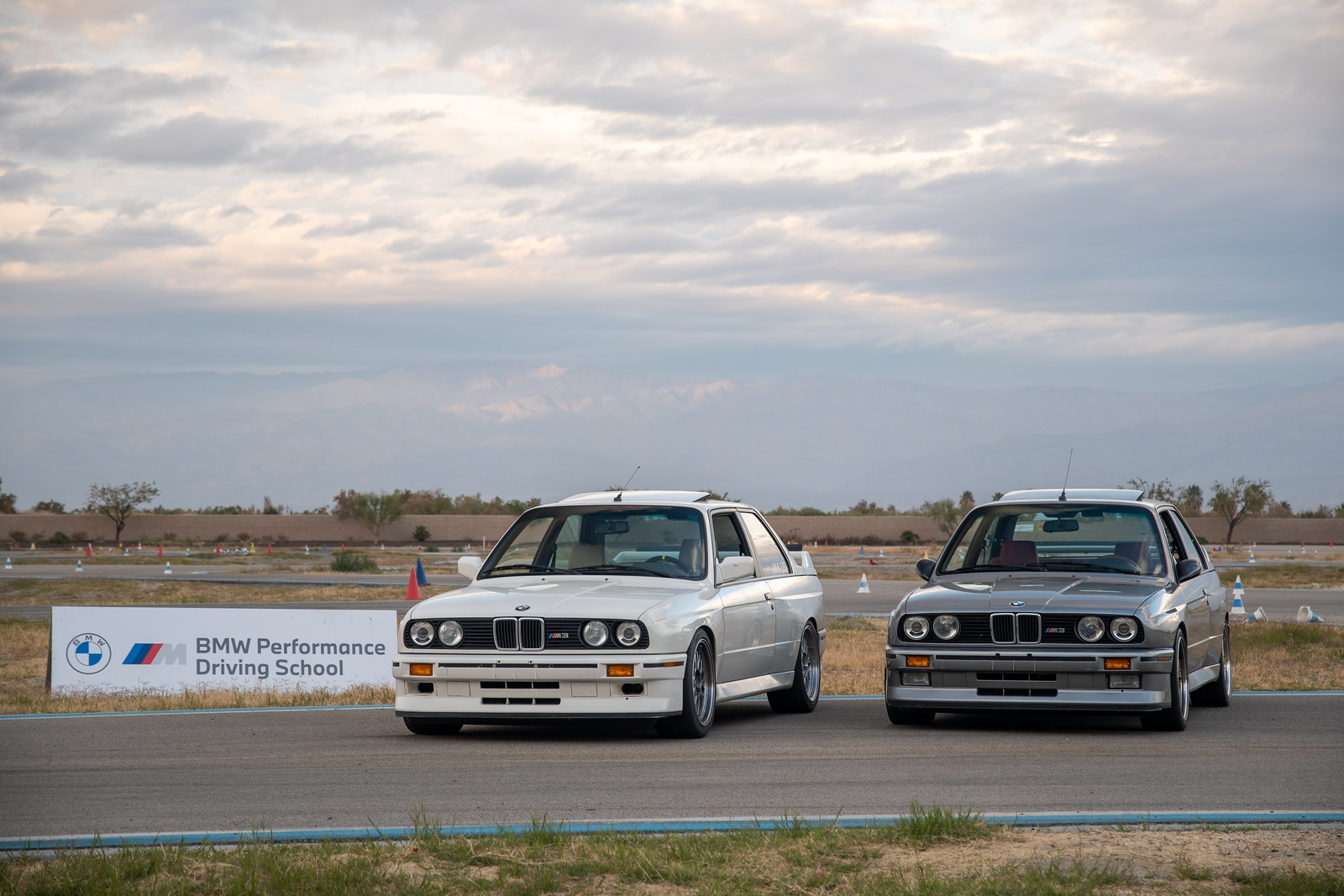 So - go drive your cars. Get the rock chips, it's worth it. Thanks for reading. 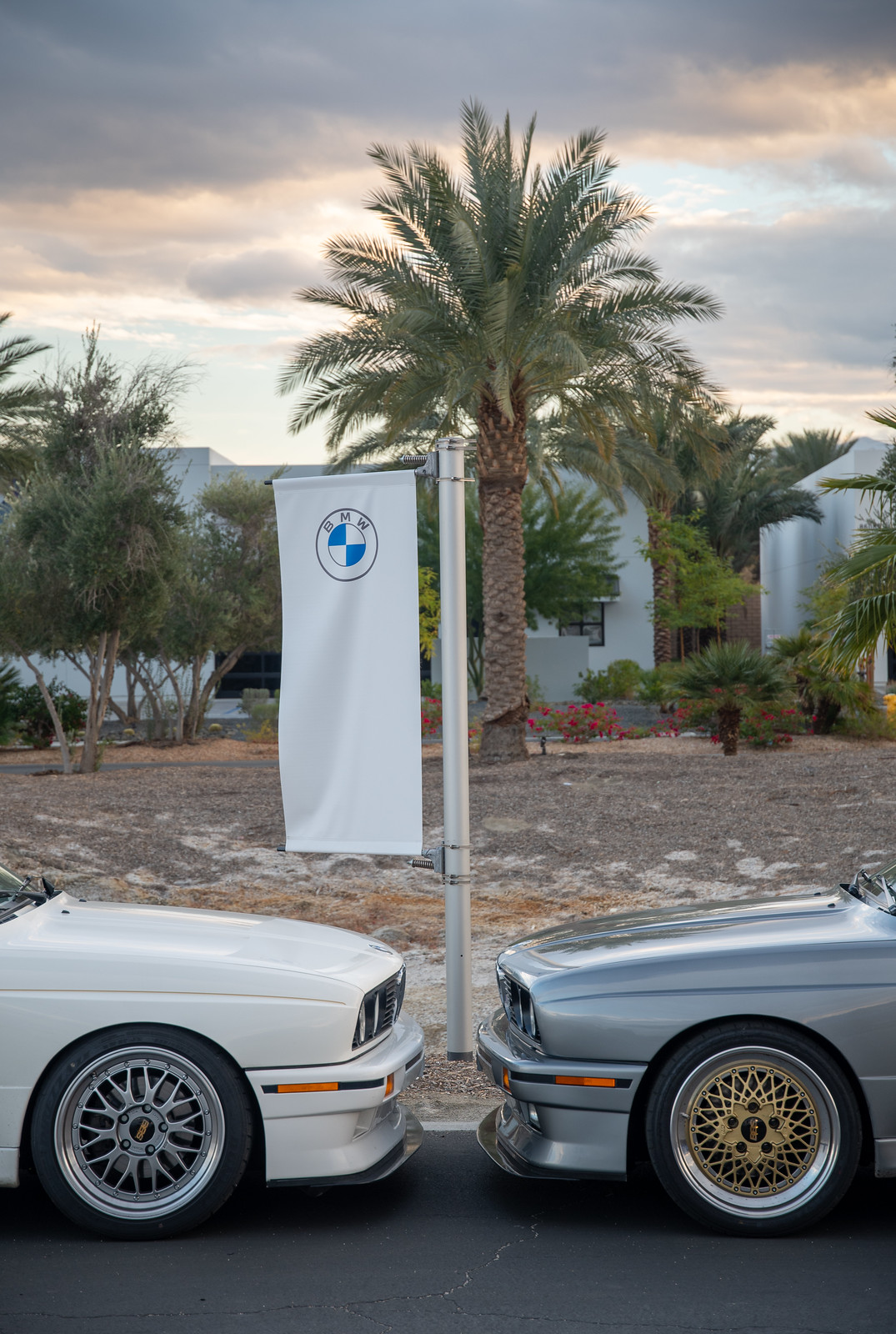