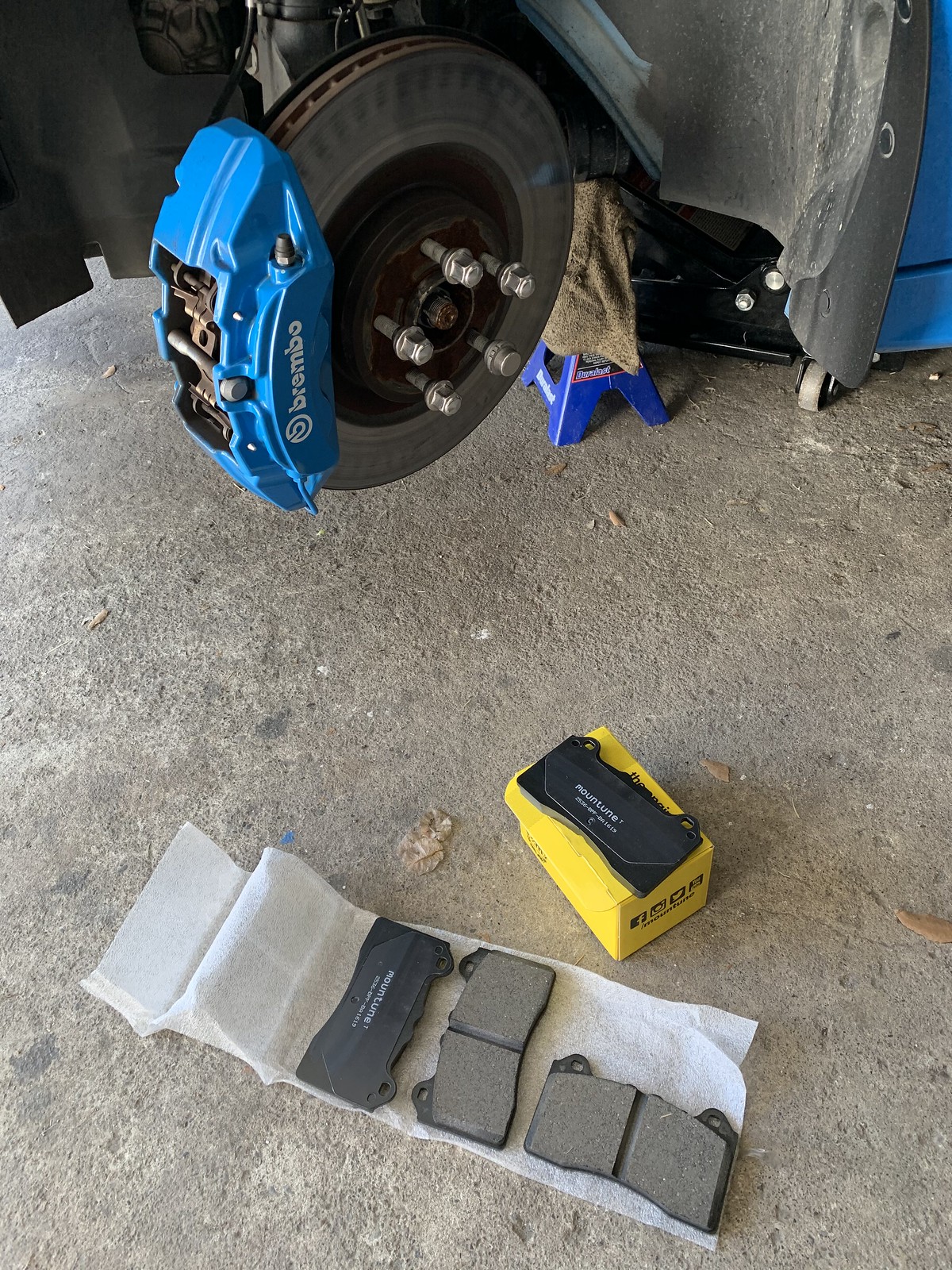 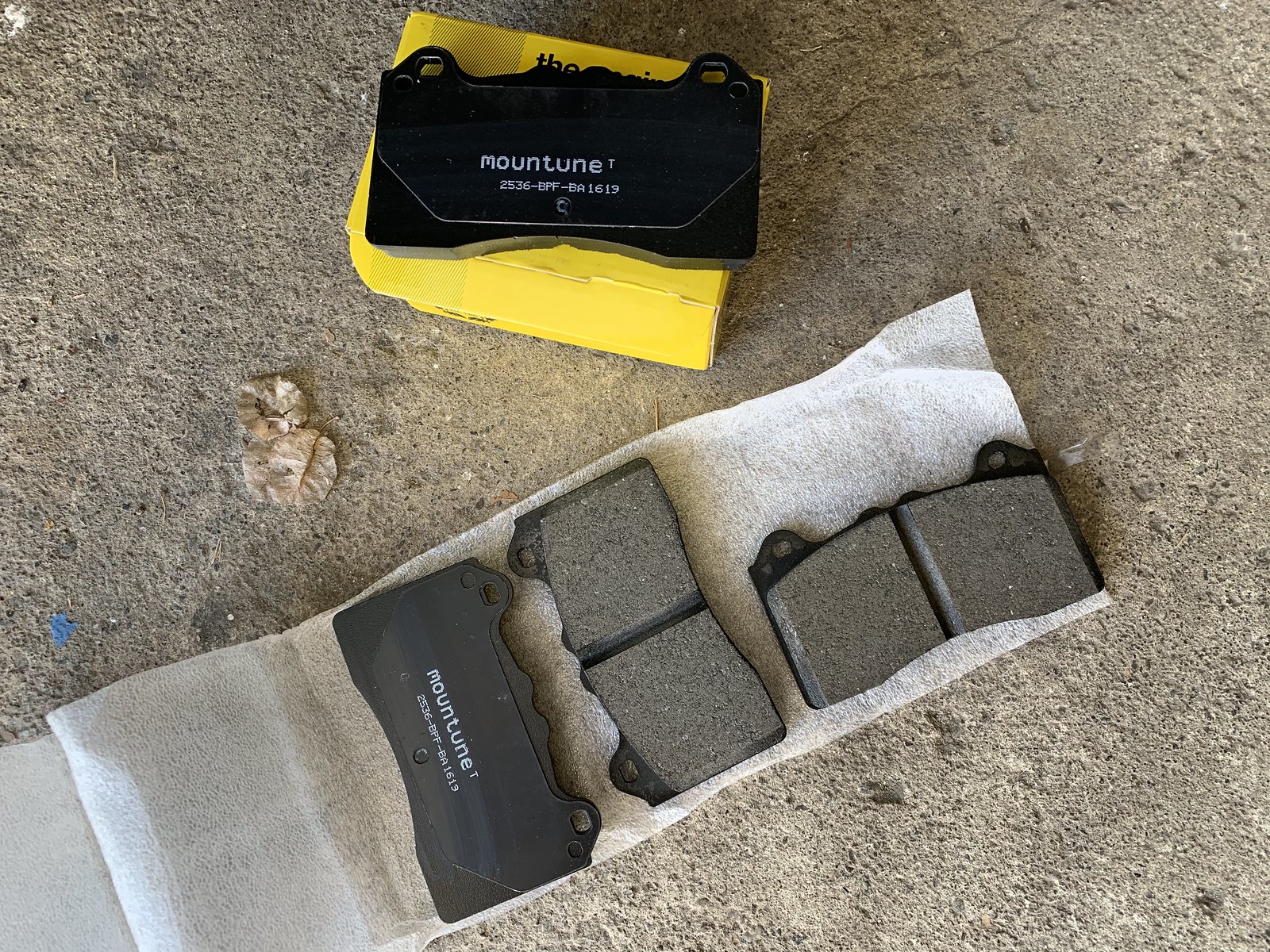 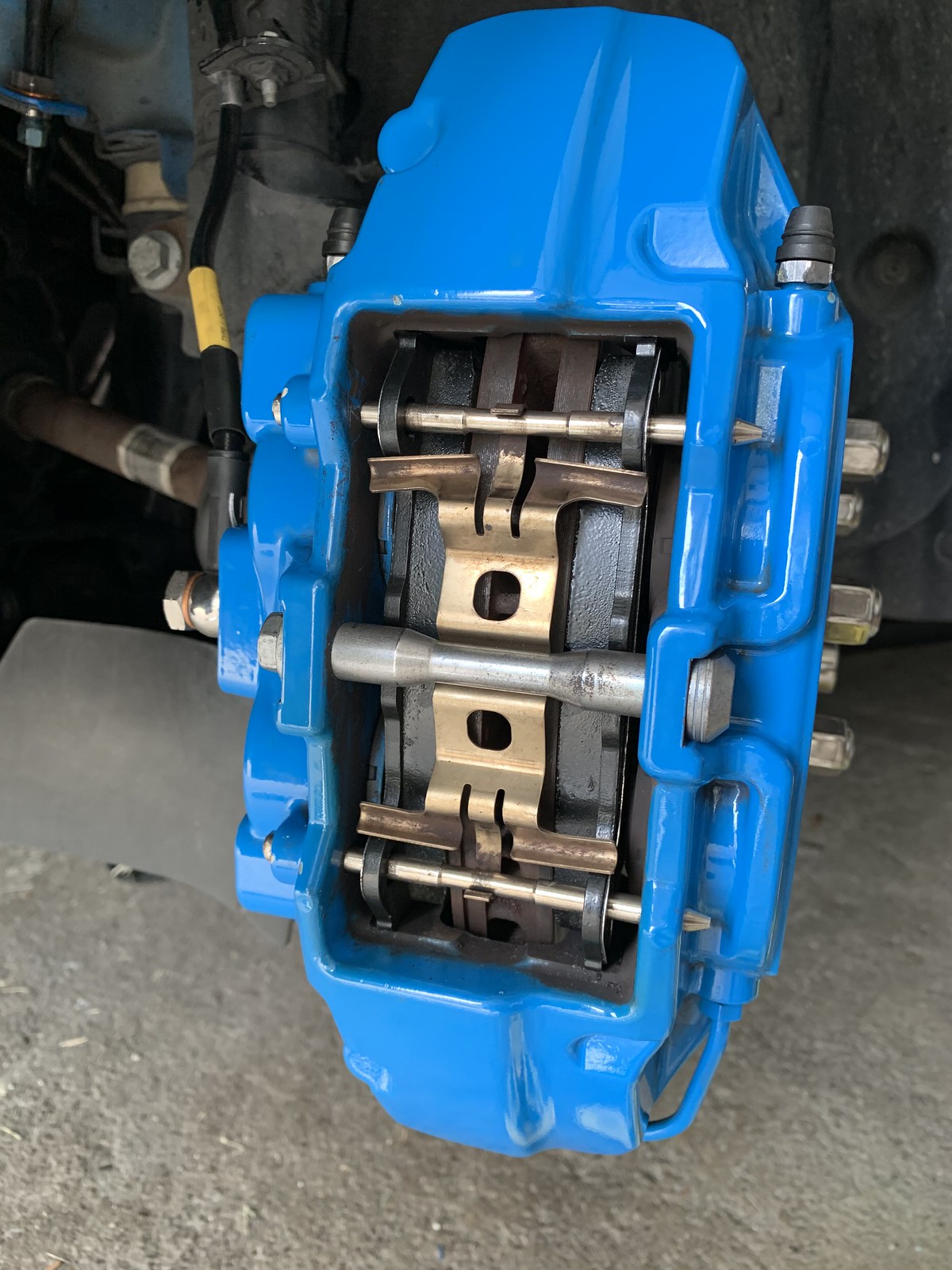 Installation was straightforward. If you're doing your rear pads, plan on visiting O'Reillys to borrow a brake pad compressor tool. The rear piston must be screwed in and it's a weird two-dimple thing that needs the tool.

I did not find any bed-in instructions, so I used a mish-mash of procedures published online and did the following: 5x 80-10mph stops, 10x 80-40mph stops, and 10 minutes of continuous driving with as little braking as possible to cool everything back down. I repeated that procedure a total of three times. 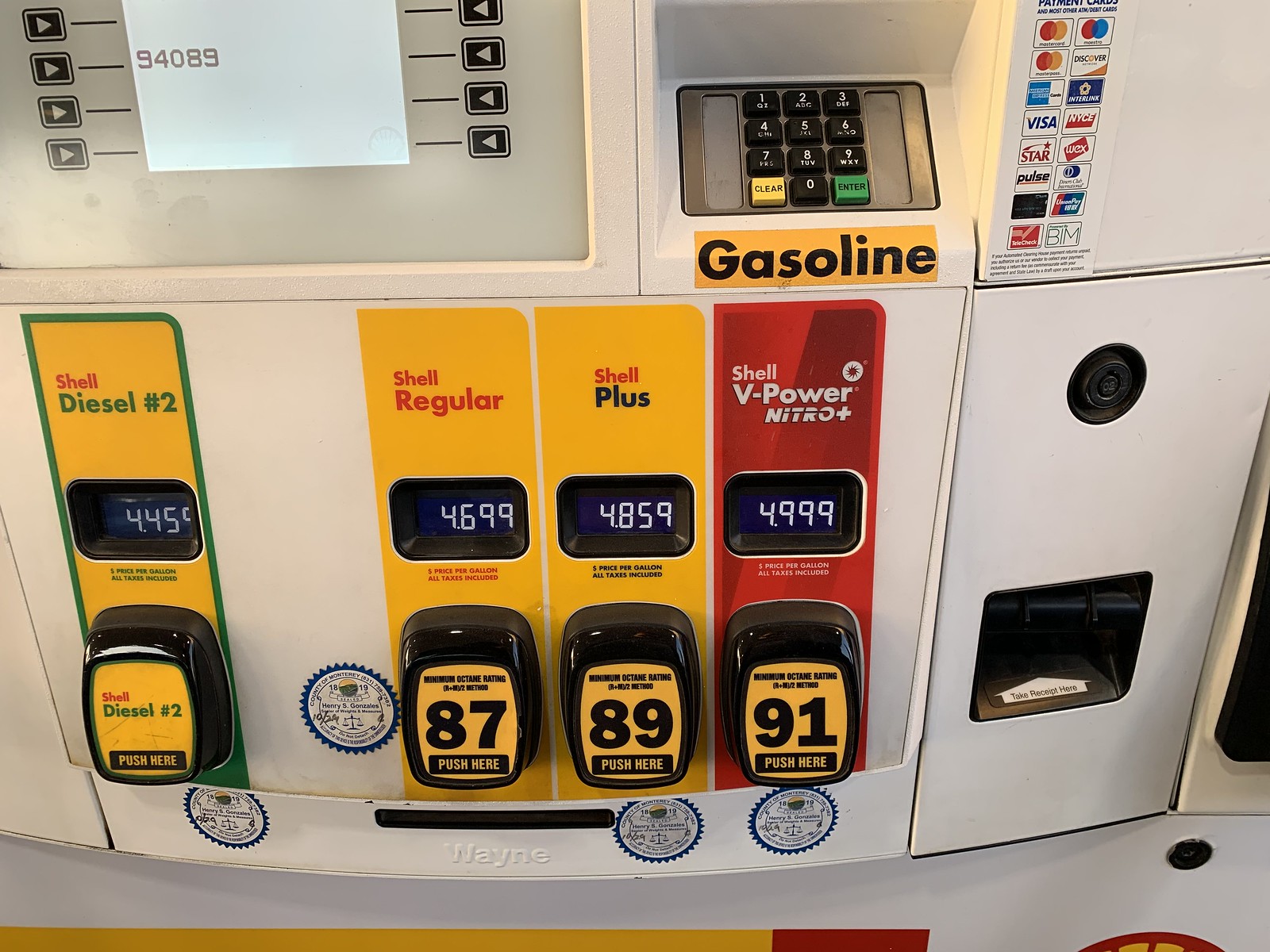 On Wednesday I drove down to Laguna Seca. 91 octane is $6 at the track, which used to feel outrageous, but these days things aren't much better outside. 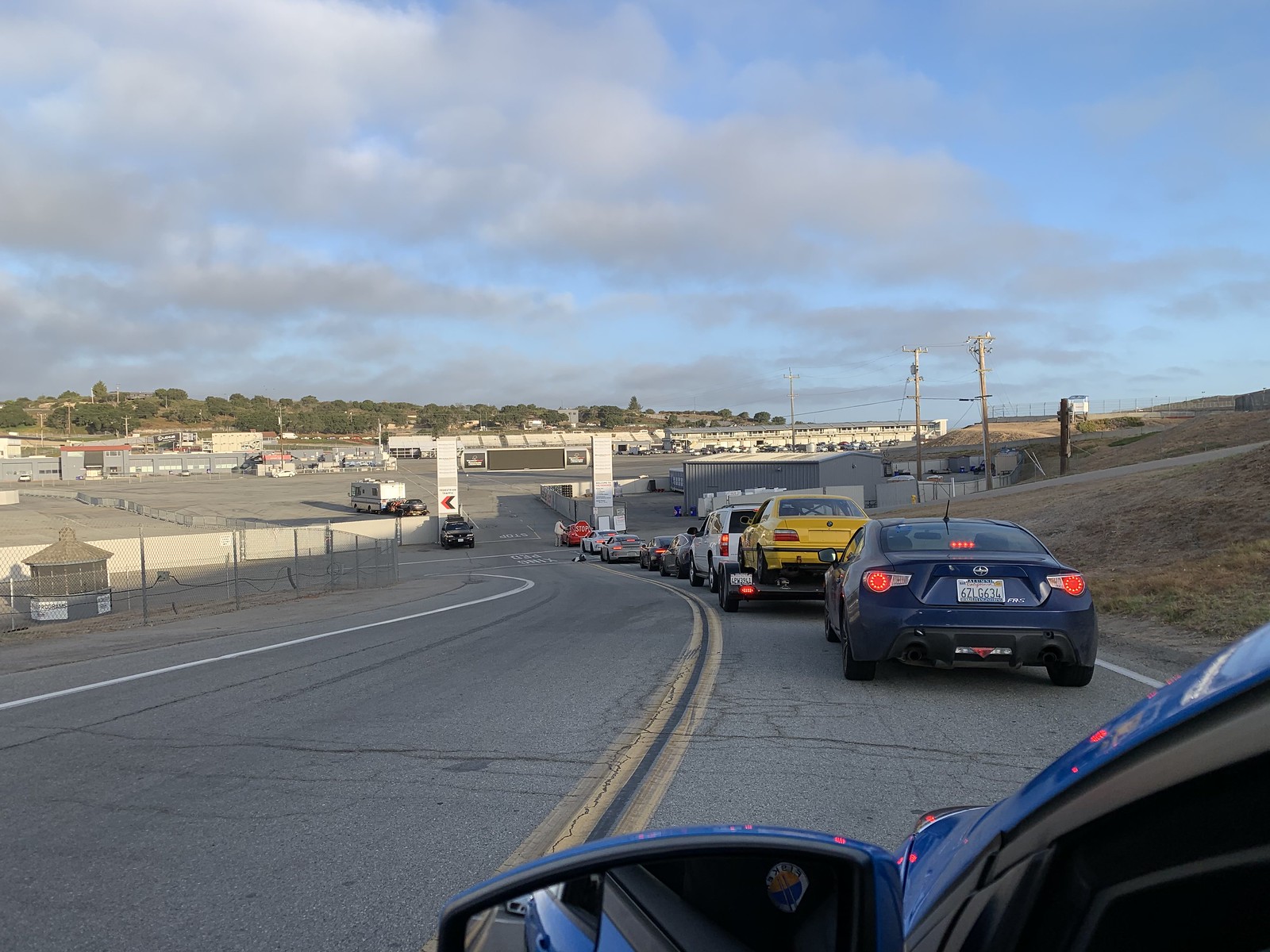 Weather was cool and clear, peaking right around 70F. The event was coordinated by Hooked on Driving, who I have not run with before, and their execution of the event was in line with their strong reputation. There were three run groups, each getting 6 sessions across the course of the day. 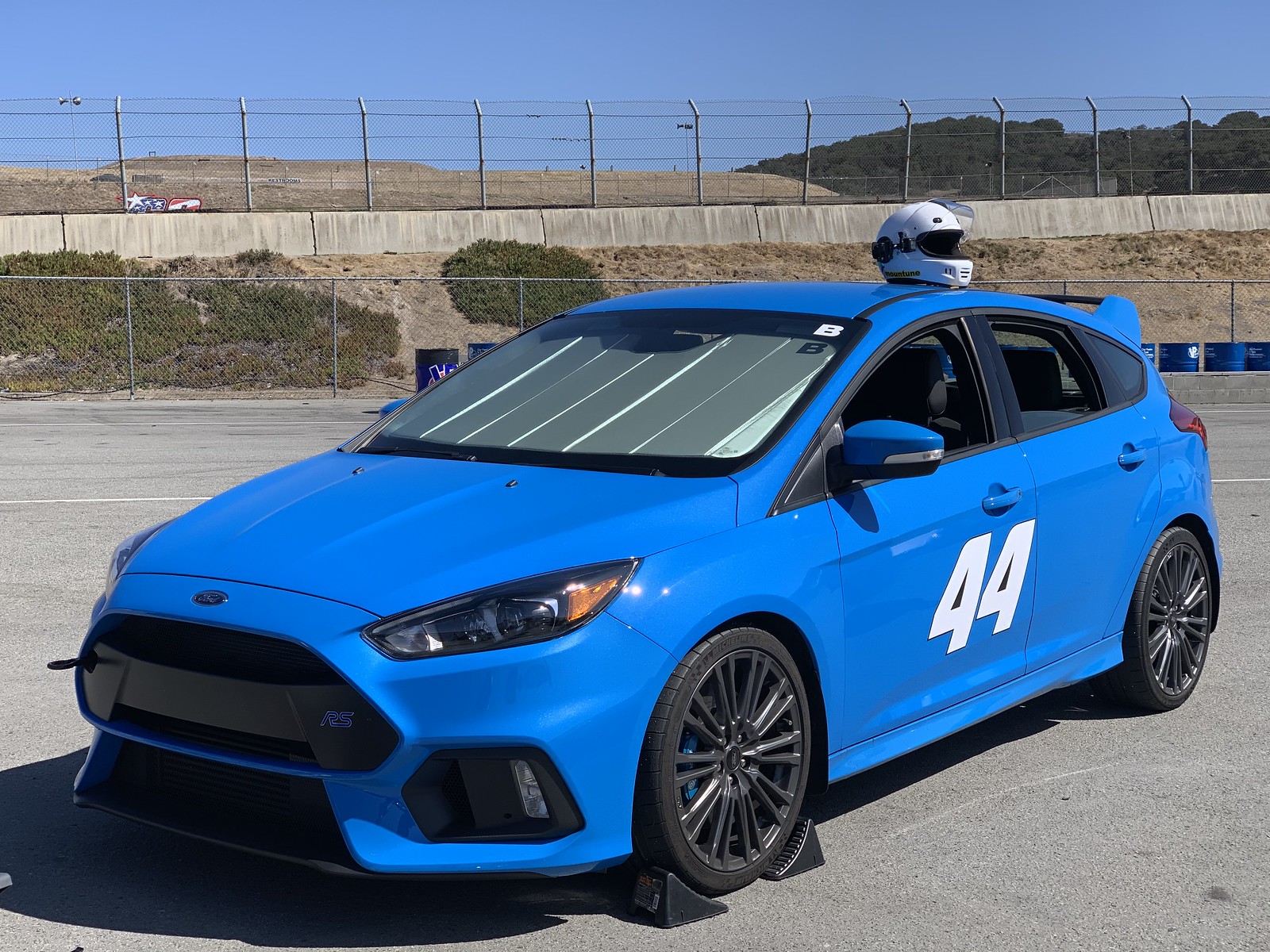 I came with some changes based on what I'd learned last time out. First was magnetic numbers. I bought "404" from trackdecals.com, and found when it arrived that, with the border and the heavy angle on the numbers, the 12" letter height was almost the size of the entire door. I cut the numbers out individually which allows me to combine them in a way to suit what's available. I guess I was channeling Lewis Hamilton with 44.

Here's a summary of my setup for the day, with changes highlighted in bold:

I knew that my tires were going to be pretty toast after this second track day, but I was hoping that the changes to the brake system would combat the fade I experienced on my first trip to Laguna. 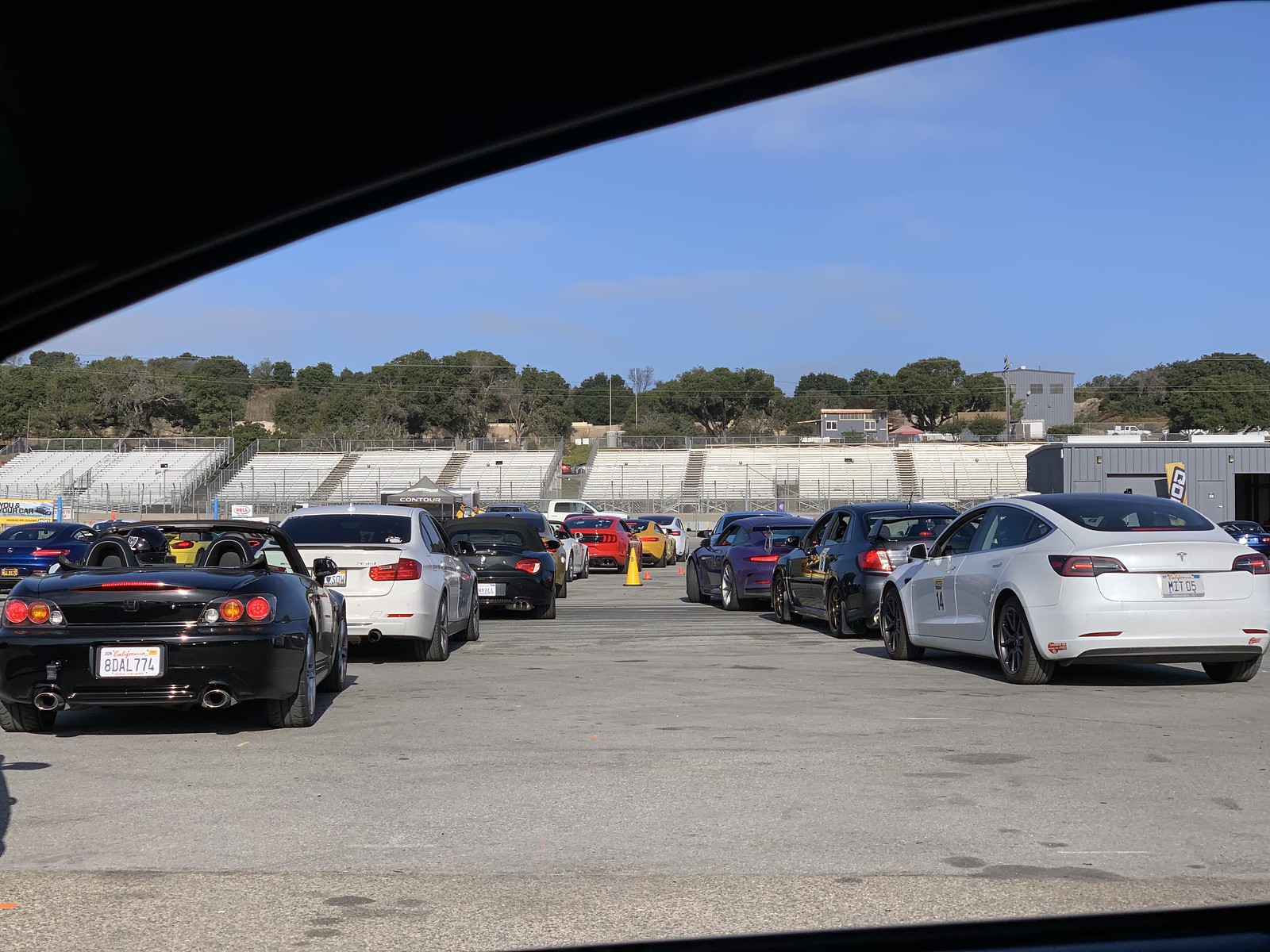 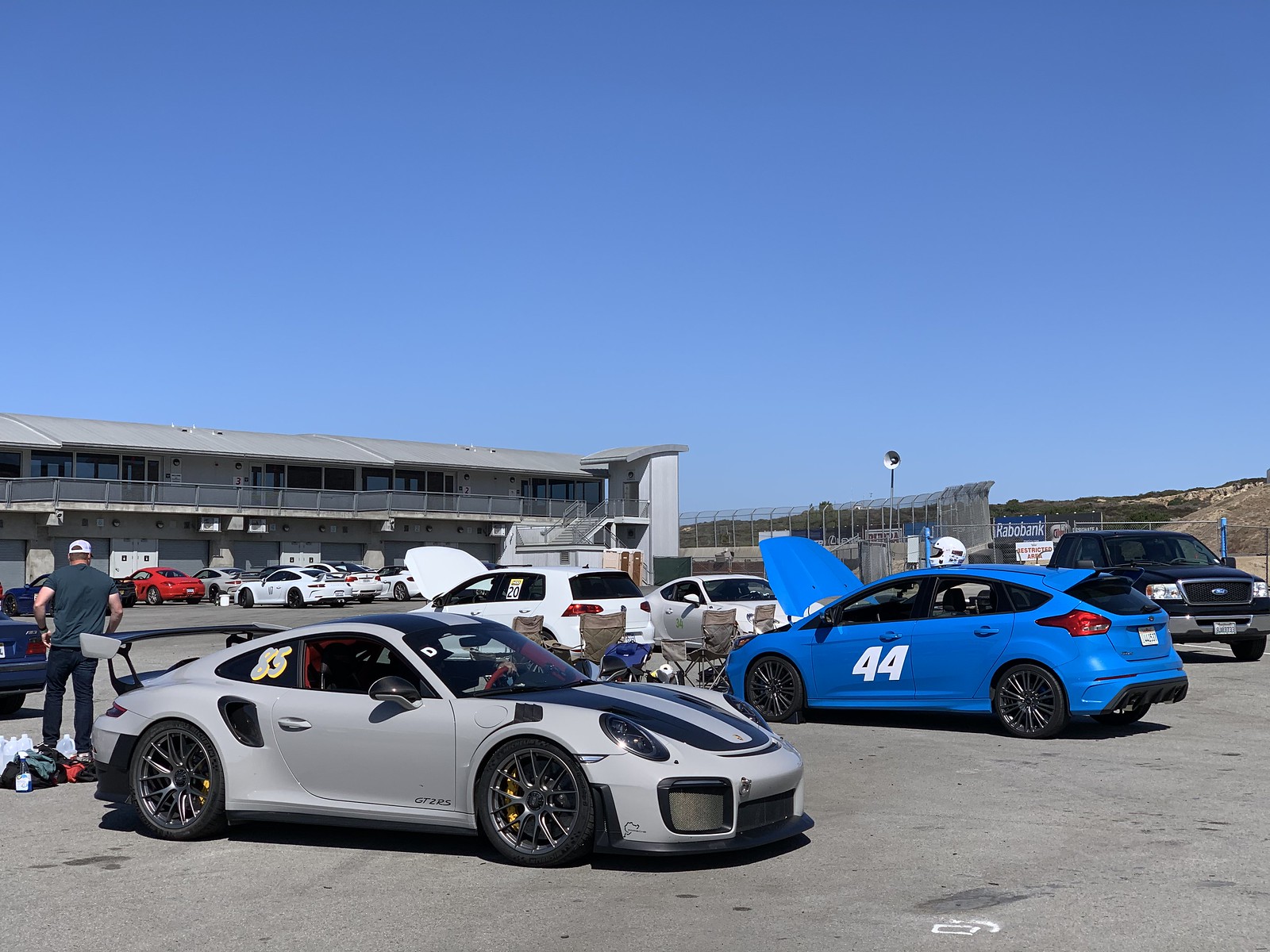 The first three sessions of the day were excellent. The brakes had more bite than stock, but the pedal did begin to fade after 3-4 aggressive laps, much like last time out. There was a really nice variety of cars out on track and it was fun to dice (safely) with everyone and see where the RS can hang. I realized while lapping that the RS has turned some of the corners that were scariest when I was in my Miata into the most enjoyable thanks to the traction available. Turn 9 in particular (second photo below) is a gnarly off-camber downhill sweeper with a blind apex at turn in. It's frequently referred to as one of the most difficult and intimidating corners, but the Focus eats it up. I come out of there with so much speed it's amazing, and I slingshot into 10. 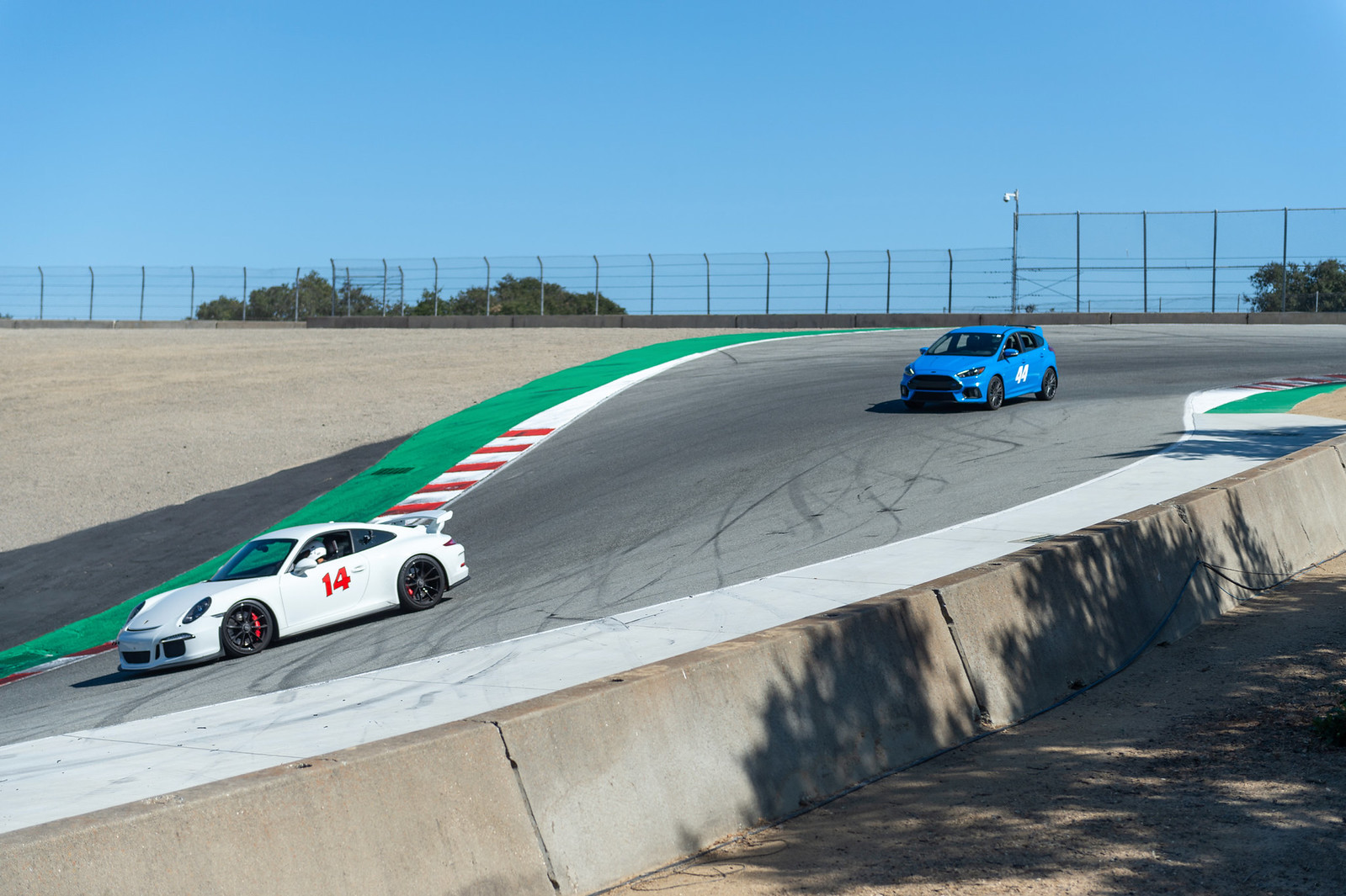 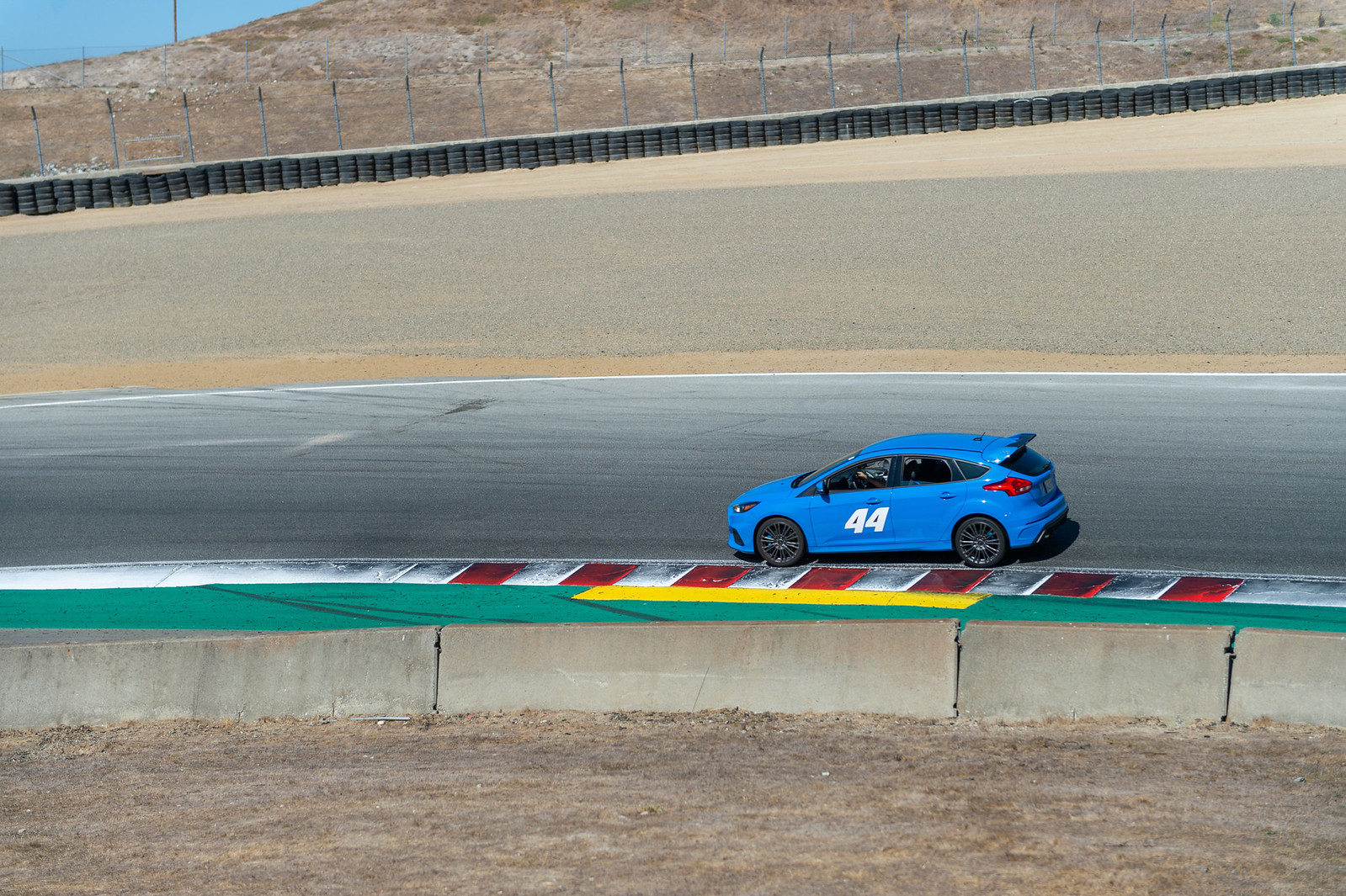 Unfortunately my braking story started to fall apart after the lunch break. The fifth session started much as the first four had, with strong initial brake performance before the pedal went soft. However, once the pedal went soft, braking power seemed to fall off as well and there was an unpleasant shudder coming through the pedal from the front end. It wasn't ABS, but it wasn't far off in feel - the same kind of high-frequency chatter. I was just starting to think about whether it was time to throw in the towel when I came into turn 2 and the brake pedal went to the floor at 105 mph.

There's not much time to react in that situation (you can hear my one choice word when I realized I was going off) and the best thing I could think to do was to try to "cut" the corner a bit and maximize the amount of time spent on pavement. Reviewing the video I came pretty close to destroying my suspension on the yellow sausage kerb. It's fortunate that I hit the kitty litter essentially backwards, as there is a real risk of rollover if I'd come in sideways. I limped around to the exit at turn 5, doing my best not to dump debris on the racing lane, and packed up for the day. On the drive home I enjoyed weak, screeching brakes ("must be rocks stuck") and a nice rhythmic thump from the front tires.

When I got home I pulled off the front wheels to see what had happened. As soon as the wheel came off, I saw something that I couldn't really believe: 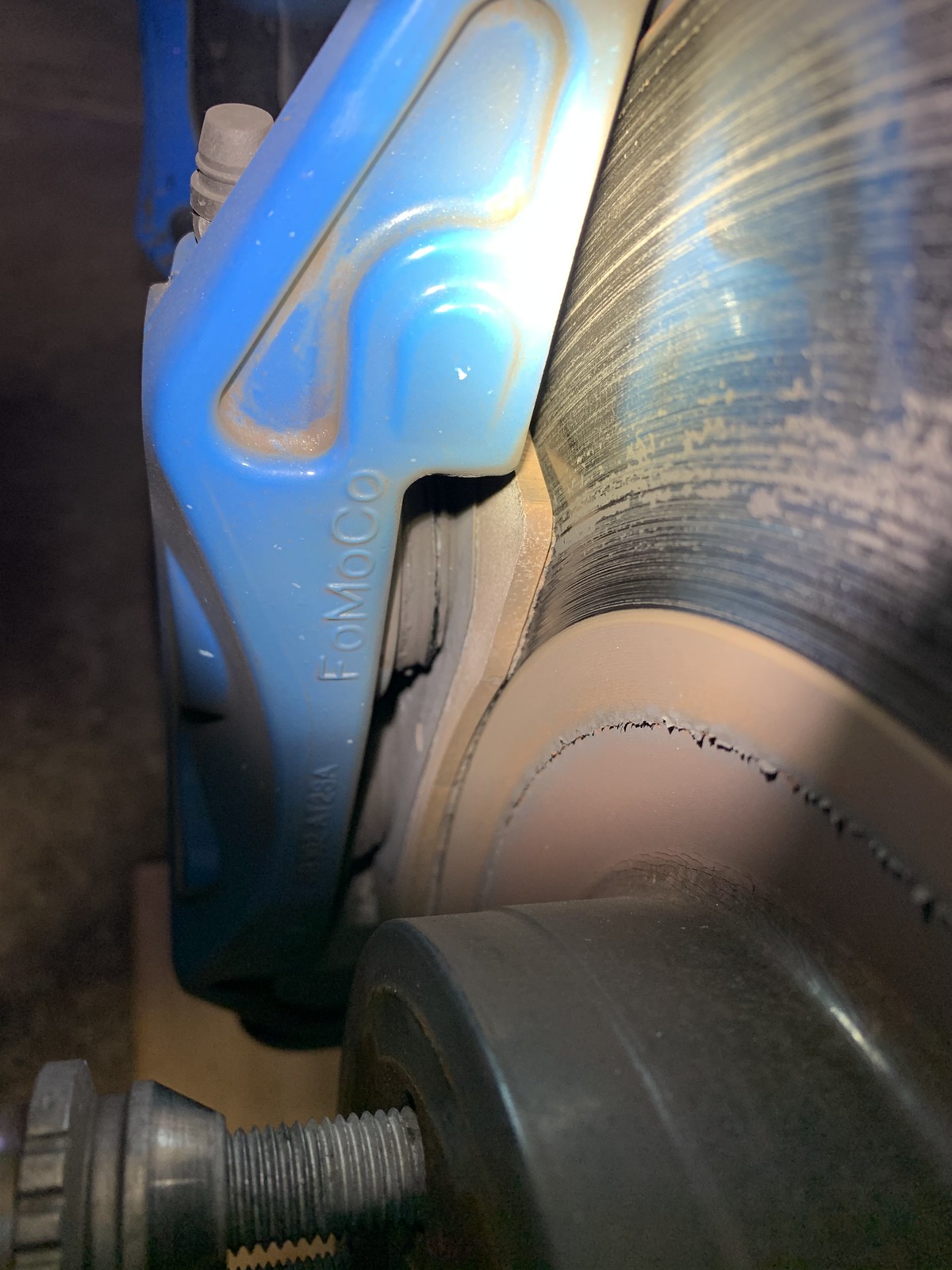 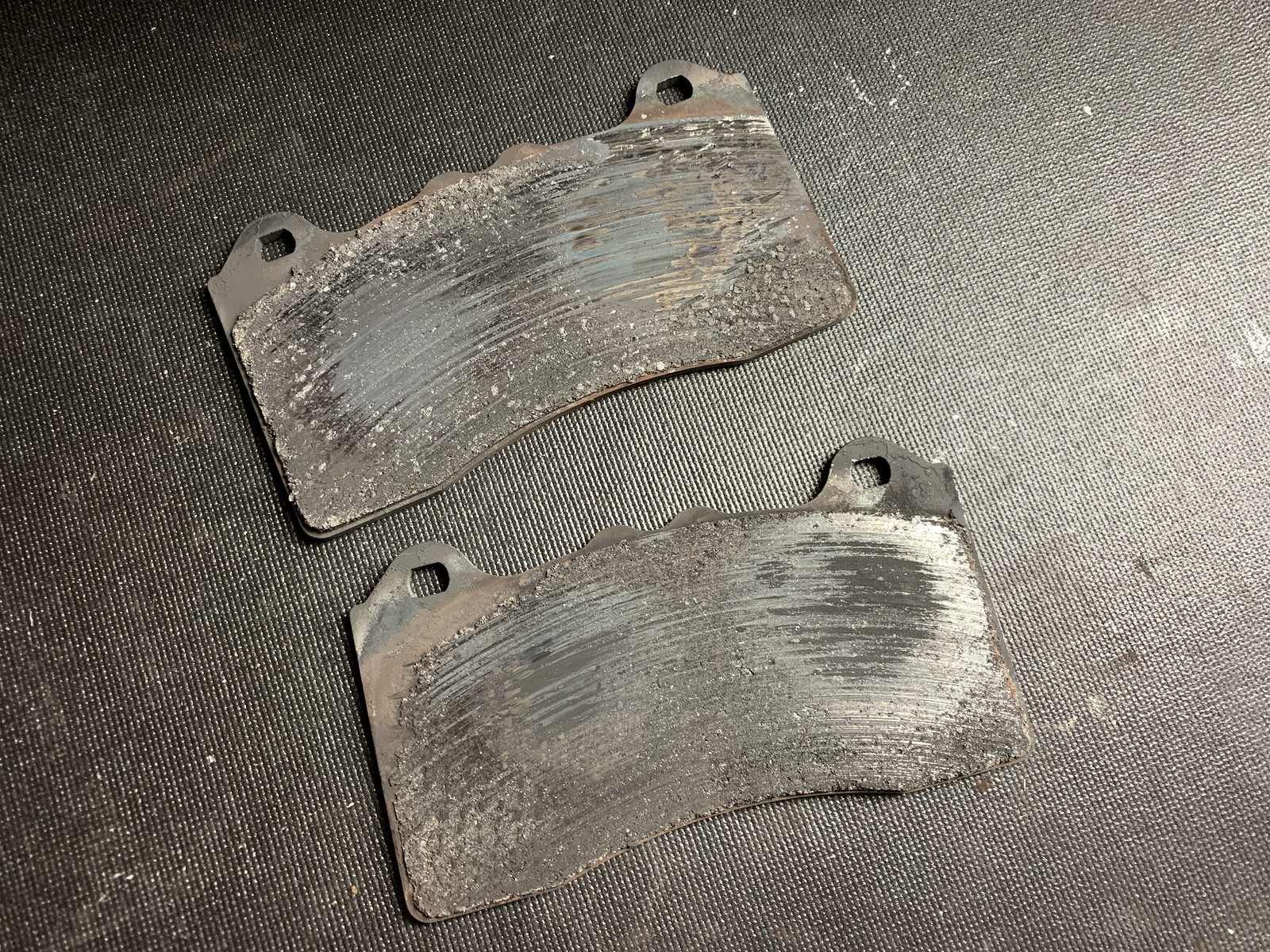 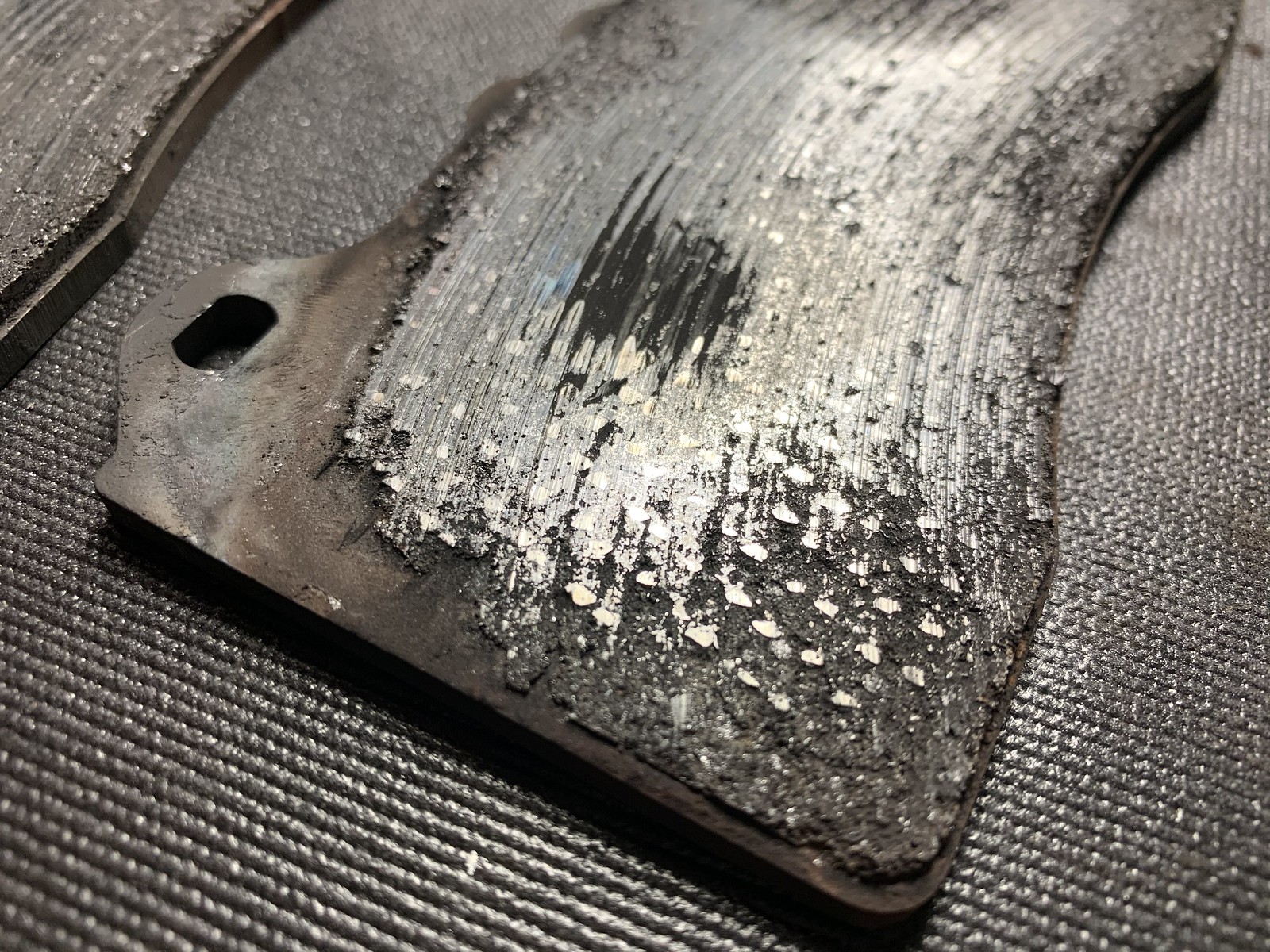 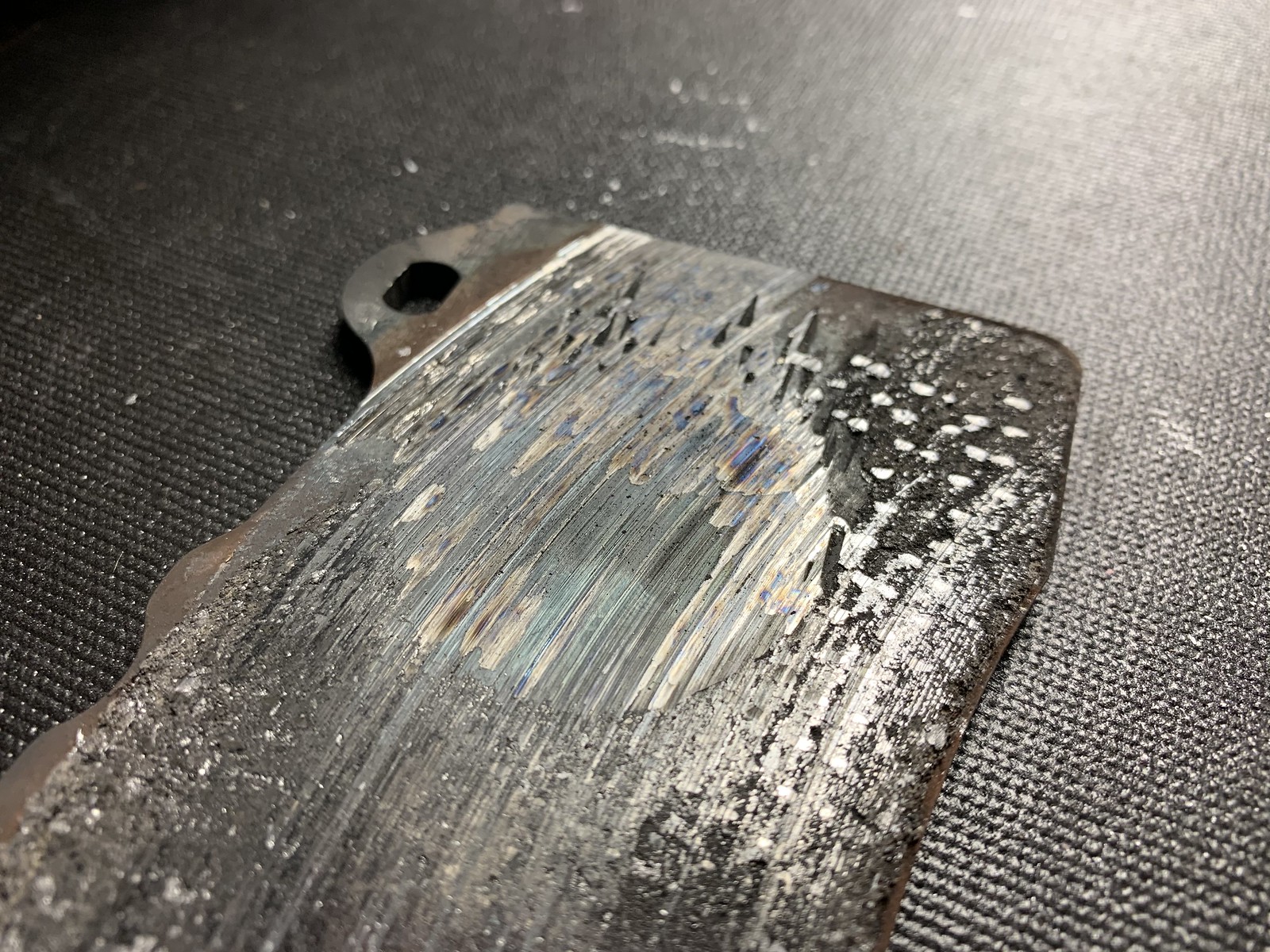 Yes, my brand new "track" pads were completely and utterly obliterated. If you ever wanted to know what happens when you run your pads to zero, I can tell you. You boil your fluid, destroy your rotors, tear/melt your caliper piston boots, and fly off track at the end of the straightaway. Obviously I am largely at fault for this damage and my near-wreck. I should have been monitoring the brake pads across the course of the day, from session to session. I was checking the hardware - looking at the rotors for any irregularities, the tires to see how my pressures were working, oil level, brake fluid level, temperatures during the sessions. It did not occur to me that I would have any issue with my four-day-old track pads wearing out in the course of 4.5 sessions of driving and I simply did not look at them. That was a mistake I obviously won't make it again.

However, this result is insane for what are branded as "track" pads. I double-checked the part numbers on the box and on the pads themselves to see if I had received the sport/street compounds in error, but that does not appear to be the case. I sent Mountune UK an email with all of this information this morning and I really hope to receive a response. This is extraordinary and, in my opinion, absolutely unsafe to sell for any track use whatsoever. In fact my OE factory pads still have plenty of material left after an identical day of use, so these were not even up to OE performance in terms of longevity in a track environment. I am curious whether this was a bad batch of parts from the vendor who supplies Mountune UK's pads (I'm not even sure who it is). 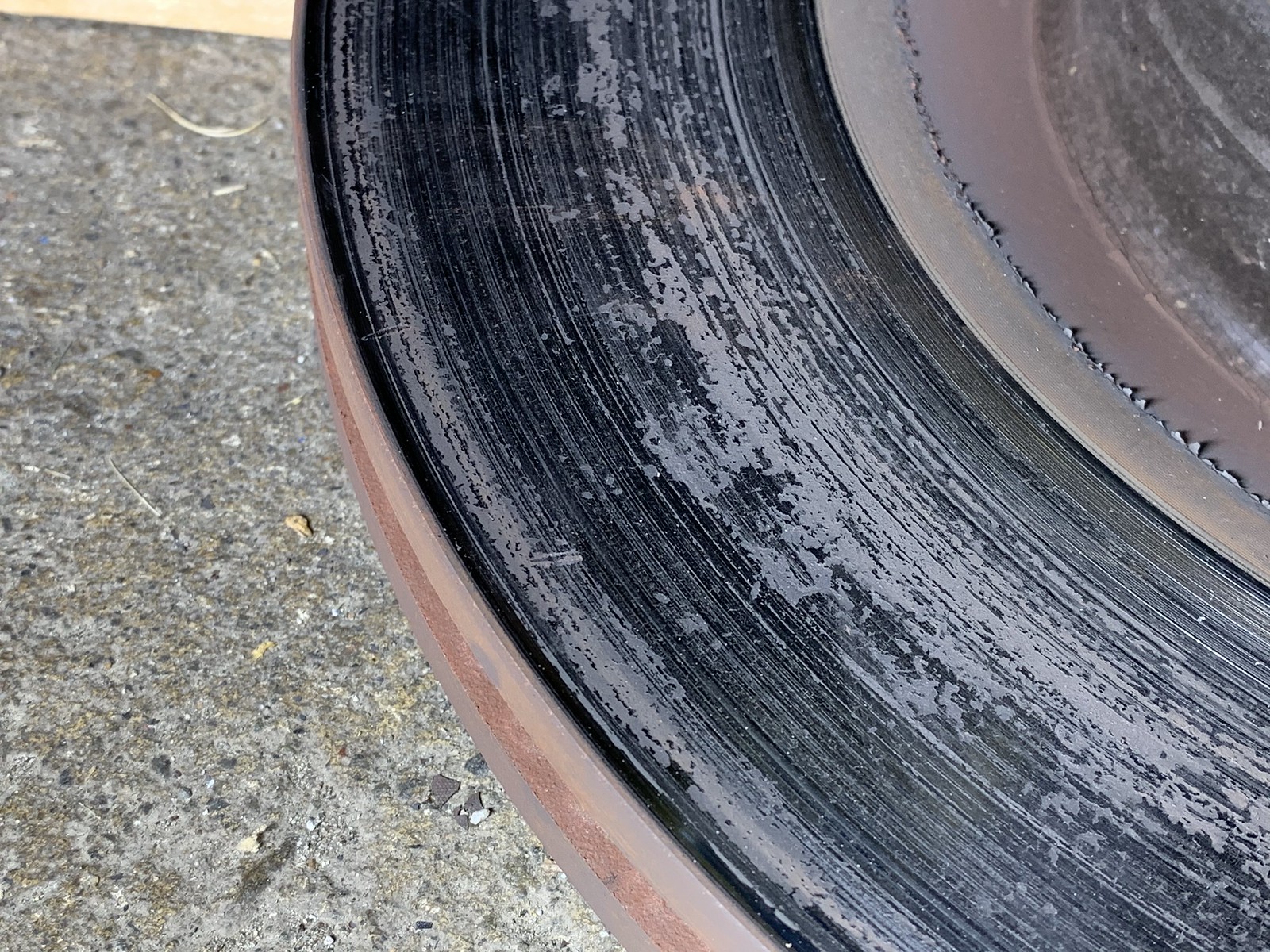 Rotors are pitted and chewed up with some interesting small slices in them. 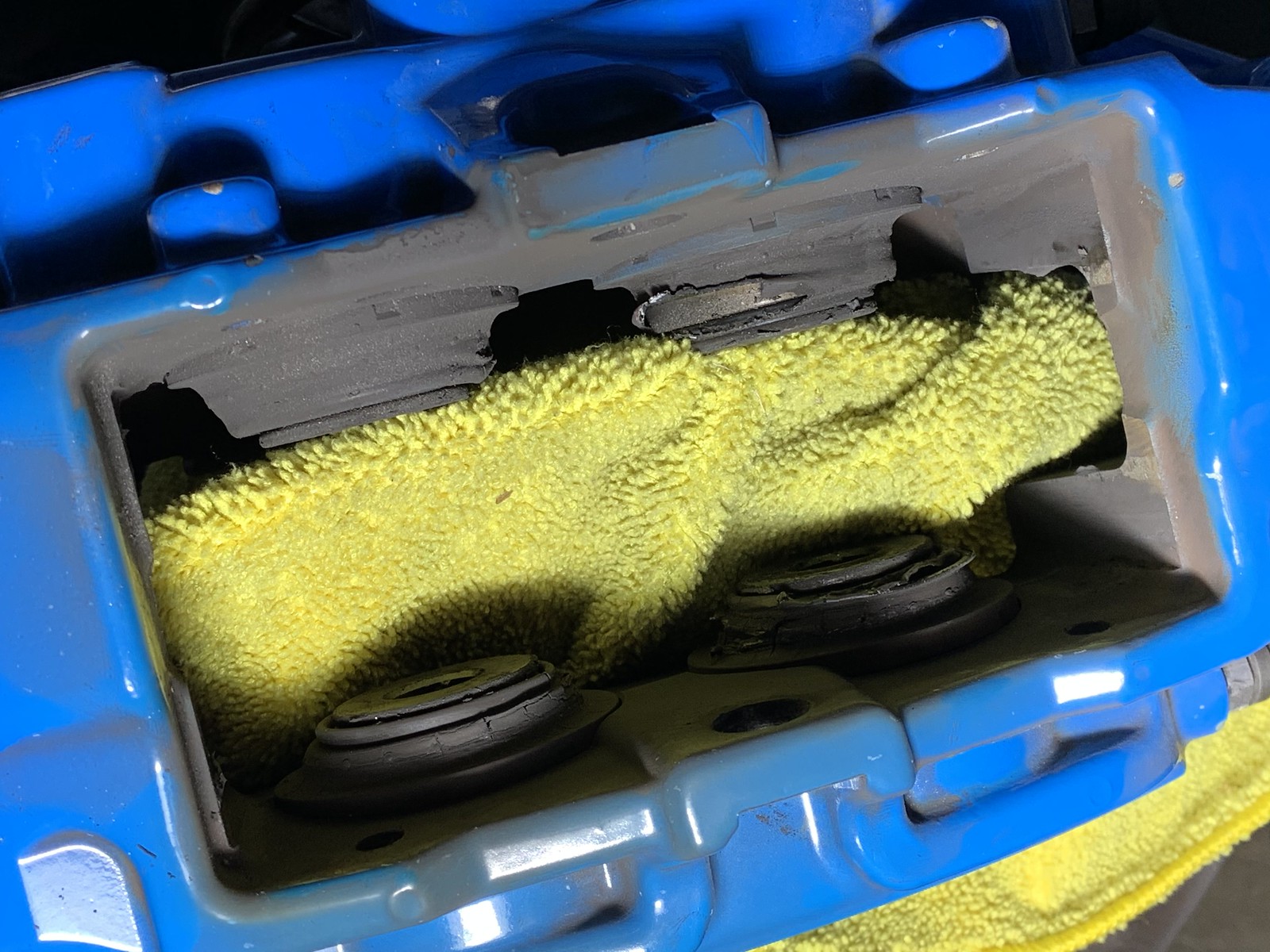 Caliper piston boots torn or melted from contact or temperature. 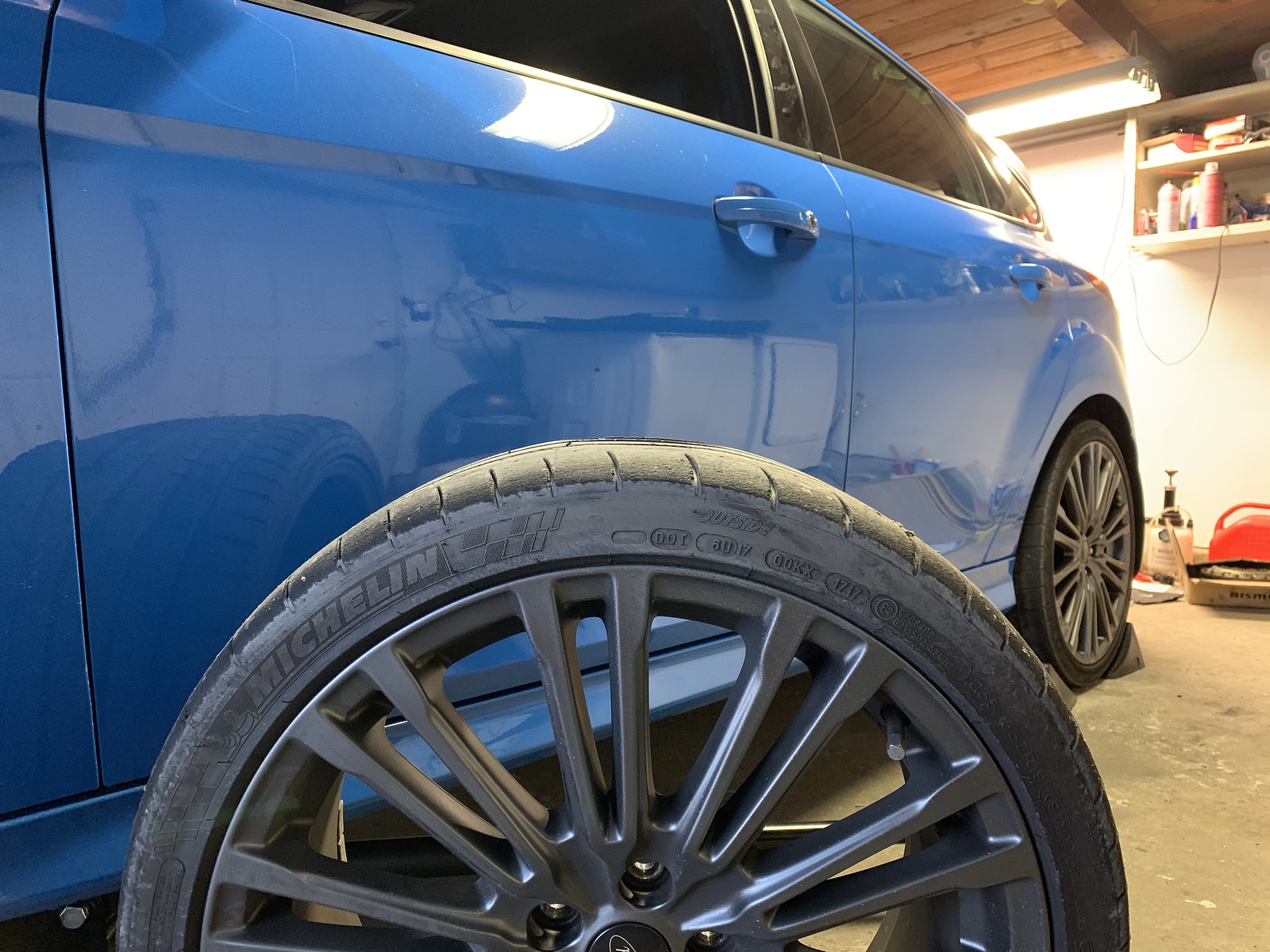 I like this one. How do you flat-spot tires on a modern car with ABS? Slide sideways. This explains the thumping I had for the drive home from the track. It's a good thing that I have an appointment tomorrow morning to install my new wheels and tires for street use.

So there you have it... a pretty scary end to what was otherwise a really enjoyable day. I ordered a set of replacement brake piston O-rings and boots from Optimum Performance, and new DBA rotors from TireRack. I reinstalled the factory front pads while I figure out what to do next. I will provide an update if I hear back from Mountune UK.

I've read, and I heard from people at the track, that our RS cars are hard on brake fluid and generate a lot of heat. Some theorized that it's a result of the clever traction systems that are dragging the brakes to control power transfer coming out of corners. In the case of this particular track day, I can't tell if this was "more of the same" mushy pedal from RS brakes getting hot, or if the extraordinary wearing of these brake pads was dumping a lot of heat into the fluid through the whole day.

I called and left a message with the RS Adrenaline Academy folks to see if they could advise on what fluid and pads they run - in theory it has to be something inexpensive and reliable, that works with the stock hardware, day in and day out. It might be time to try Castrol's unicorn blood expensive fluid to see if that does the trick.