[note: this post, like an air-cooled 911, is back-dated to when these events occurred]
Suspiciously, just as this purchase was developing I met up with Kevin, who wanted to practice rolling shots of his M3. This was actually my first time seeing an M3 in quite a while and he put me on driving duty while he practiced snapping photos, hanging out the back of an E93 M3 (fitting). I don't remember if Kevin posts on the forum here but hey, if you're reading this, post up some of those great photos! Seeing his car is enough to get a Prius owner fired up about an E30. I blame him partially for rekindling the fire and motivating my purchase. 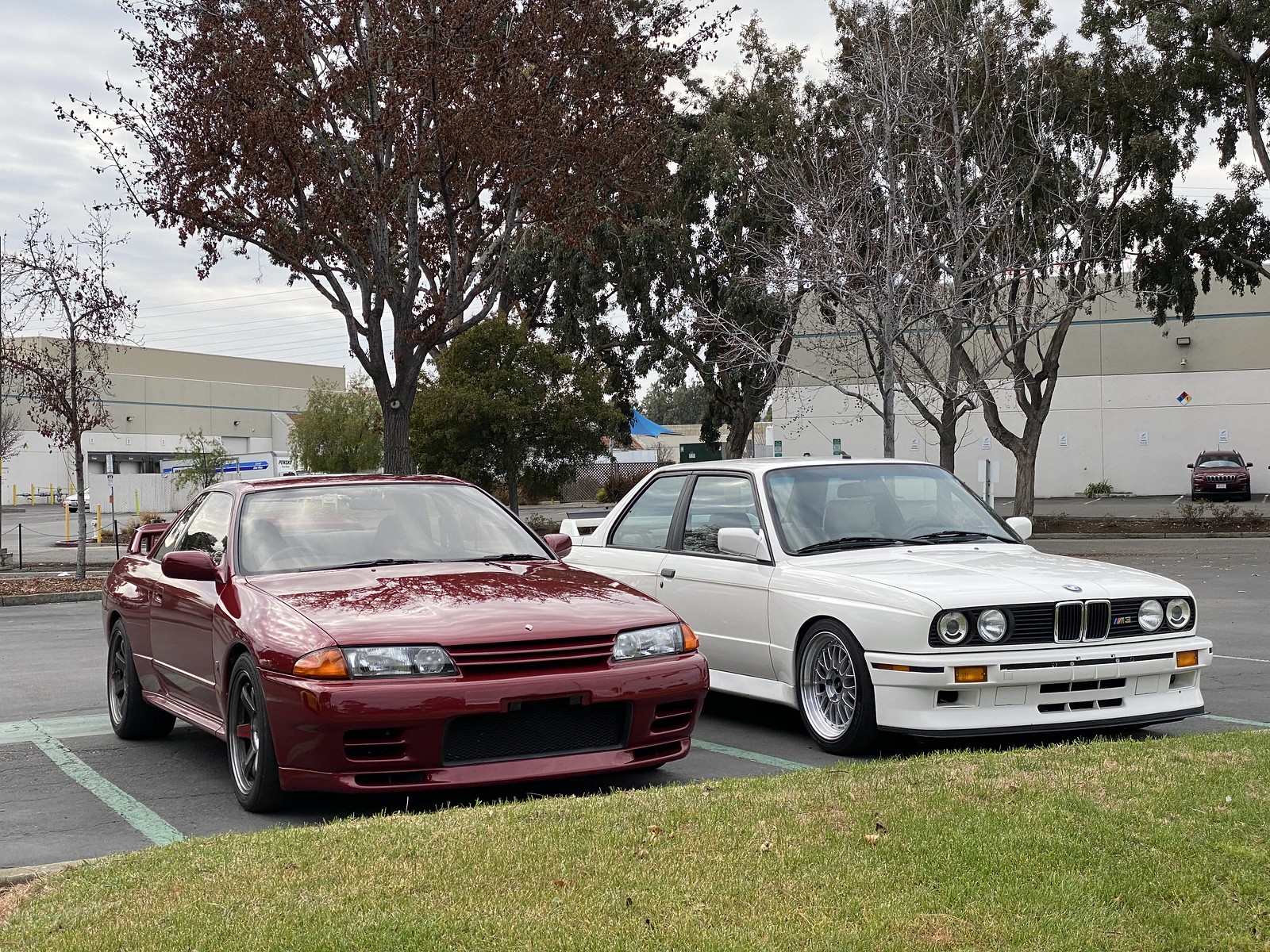 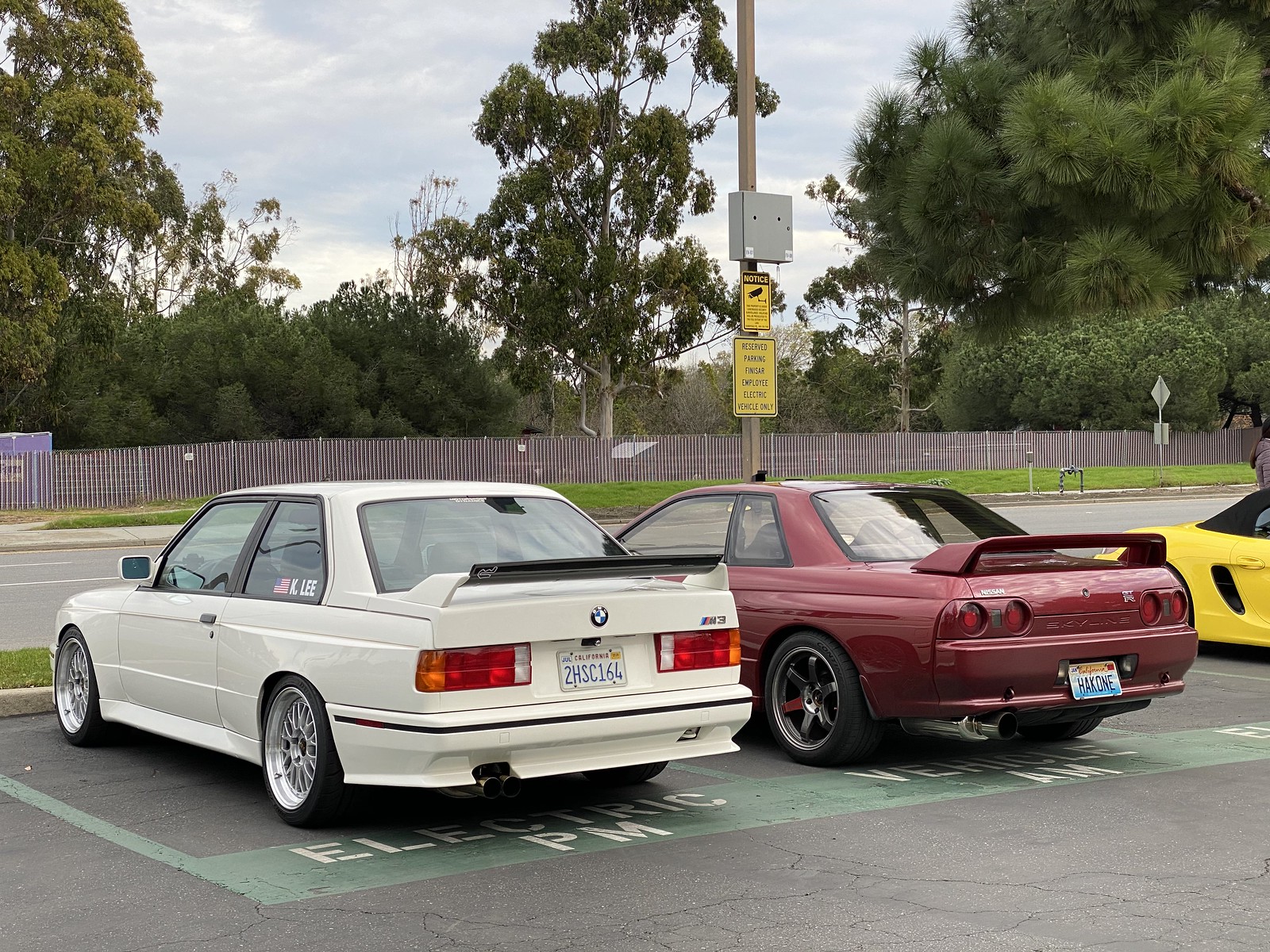 Here's a photo of the very stock motor bay. When I run out of things to spend money on, I'll grab a fresh coolant bottle to spiff things up. 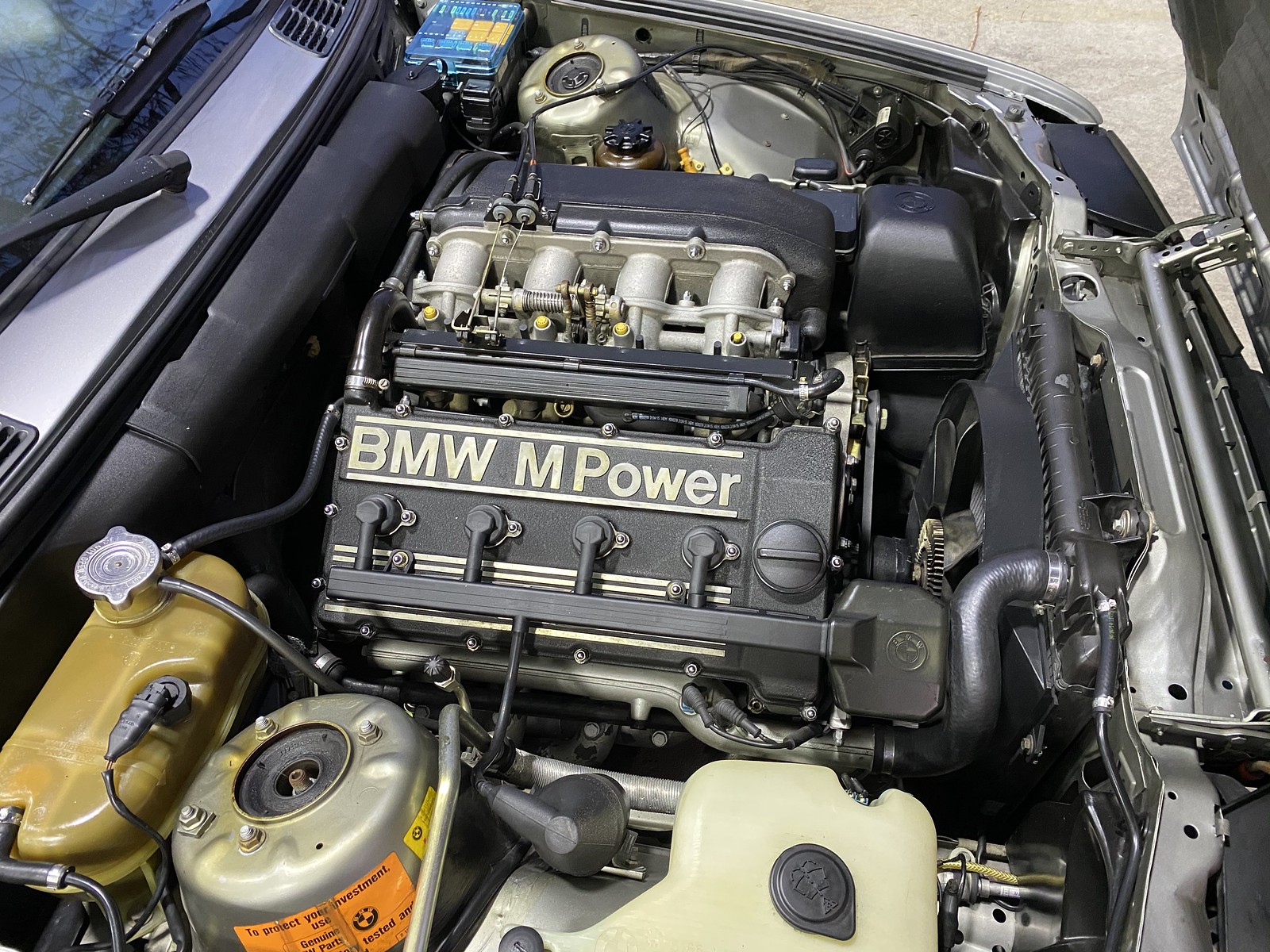 The very first order of business after purchase was to transfer ownership and get my old plates on the car. It was in the AAA parking lot that I received my first compliment for the car, and was asked if I was selling it. No homie, I bought it yesterday. The second order of business was to correct the wayward trunk M3 emblem. 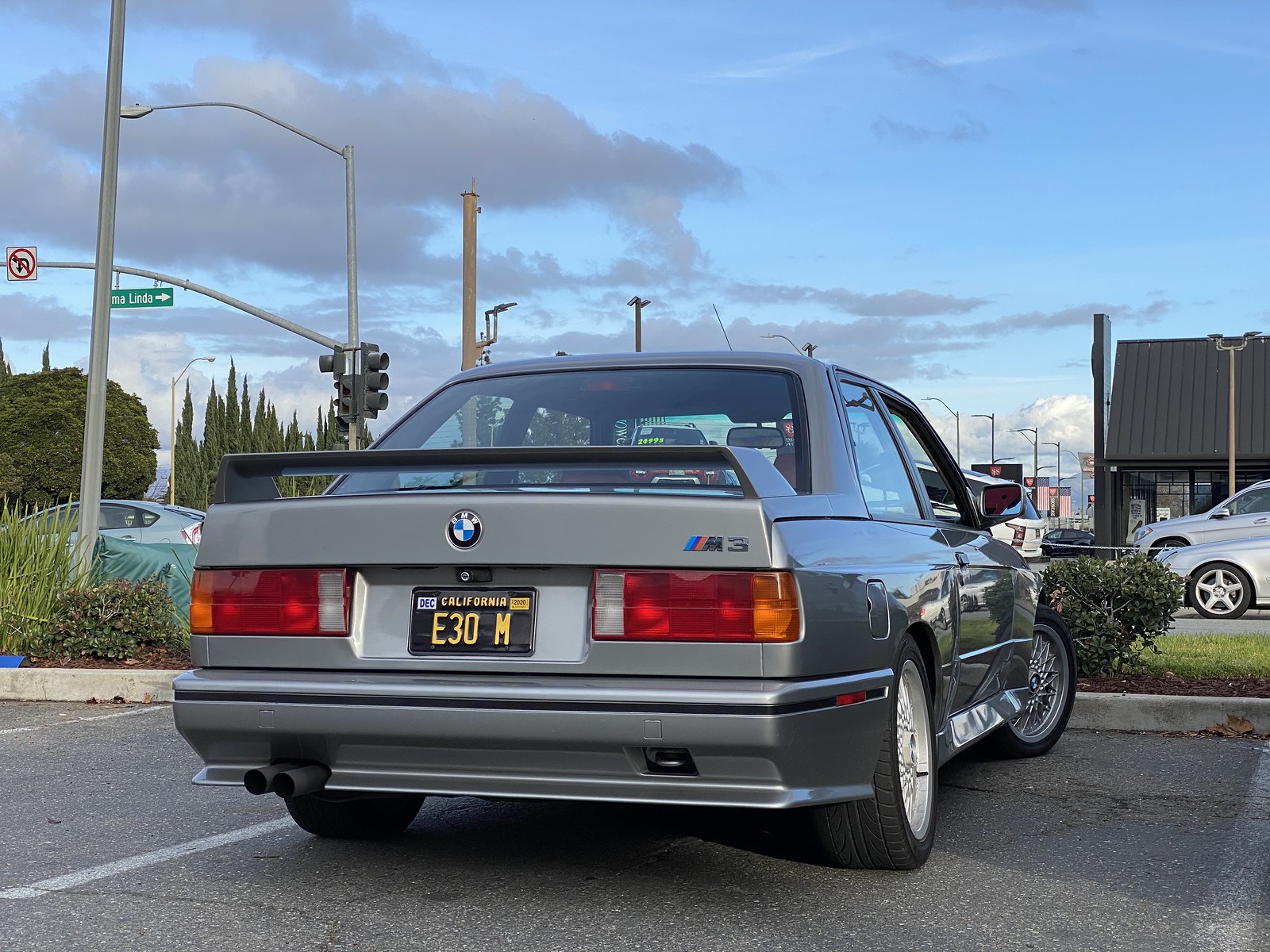 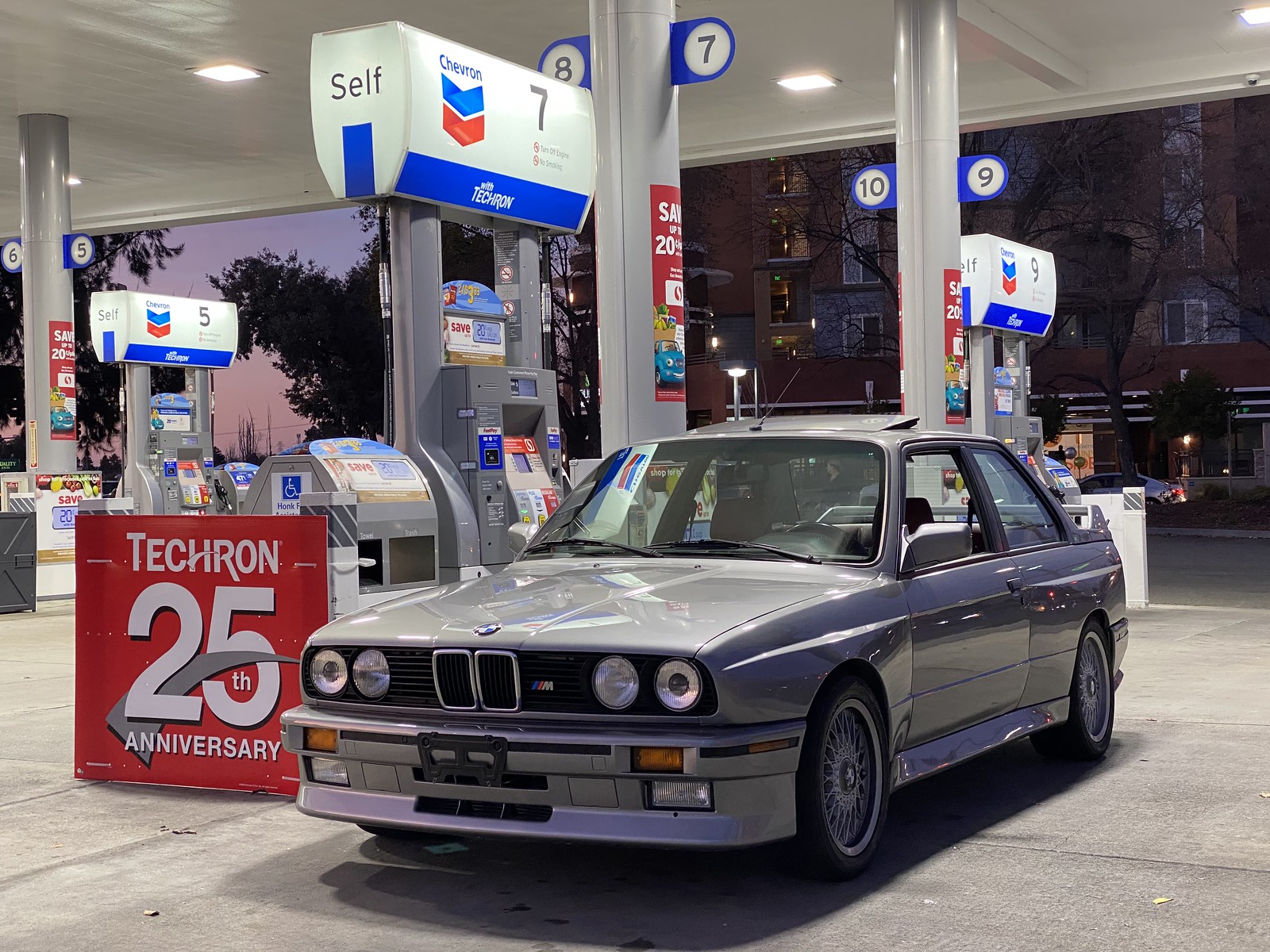 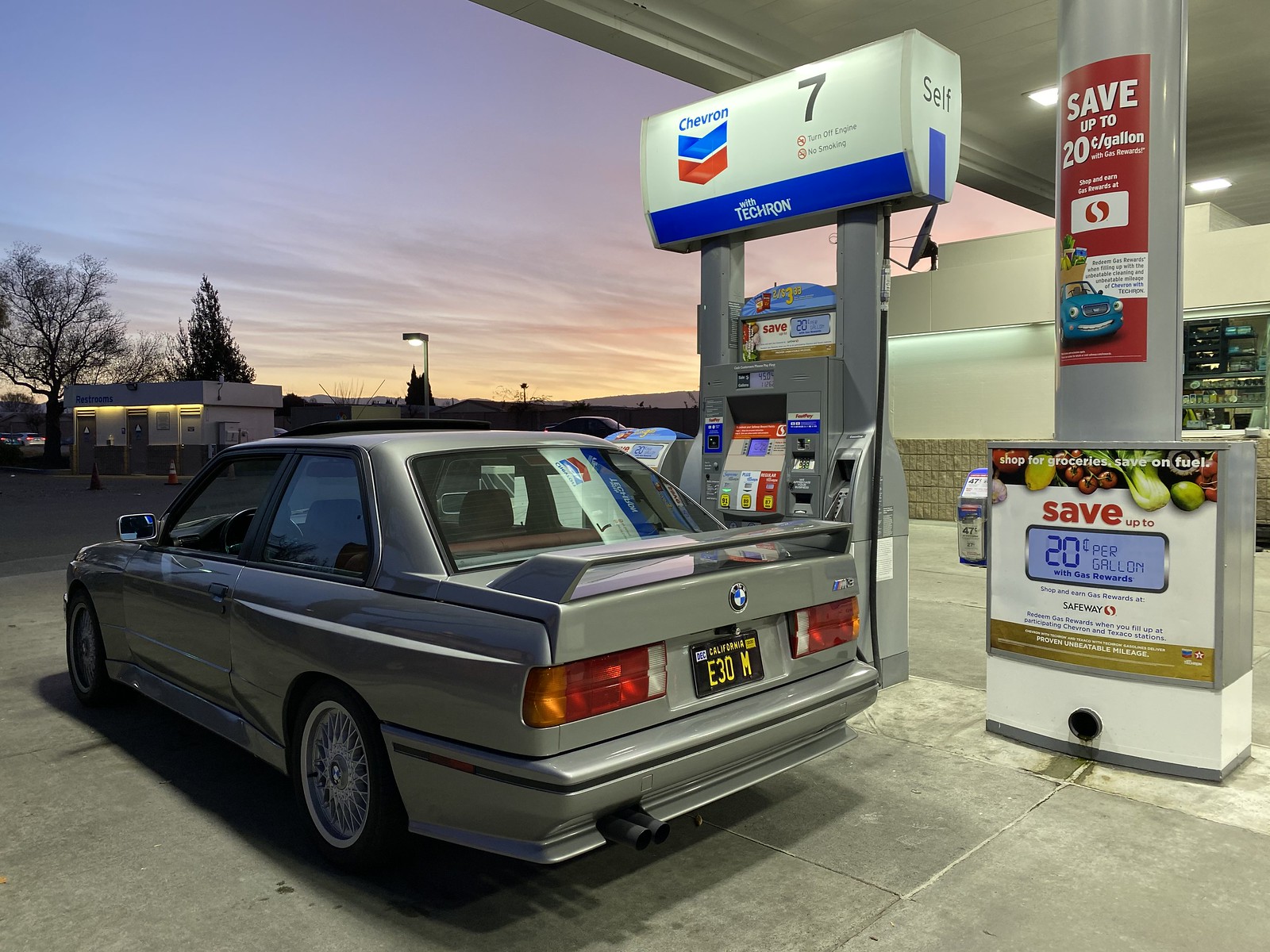 The car is riding on M5 wheels so the owner provided the stock 15s as well as a full exhaust system that he'd had removed to pass emissions. Thankful just to get a bonus exhaust, I was excited to see that it was a Supersprint resonated, non-cat center section with a Rogue Engineering diablo muffler. 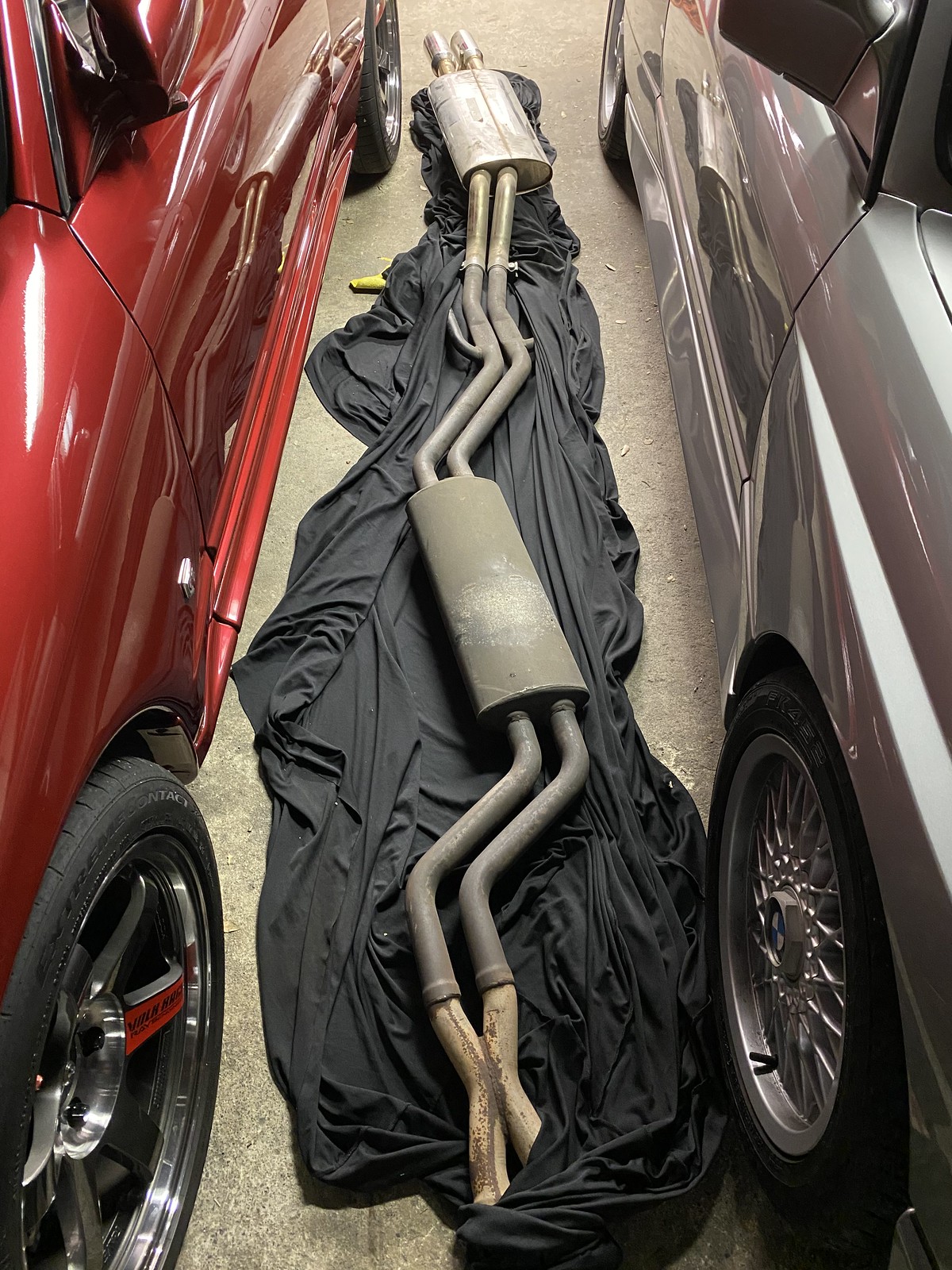 I would prefer to keep the midsection OE for the sake of emissions, but I didn't hesitate to fit the muffler. Four days into ownership, I pulled out the wrenches. 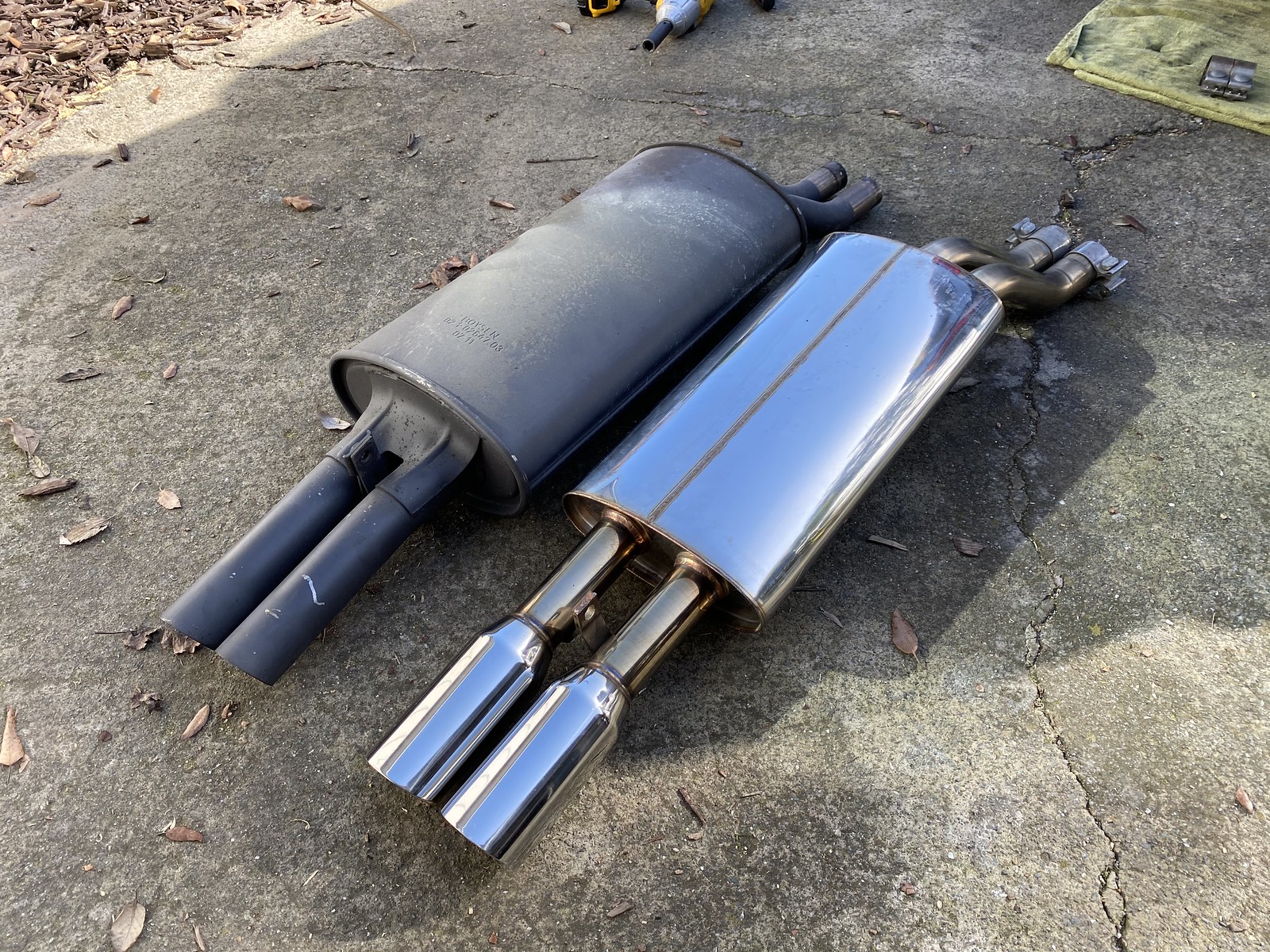 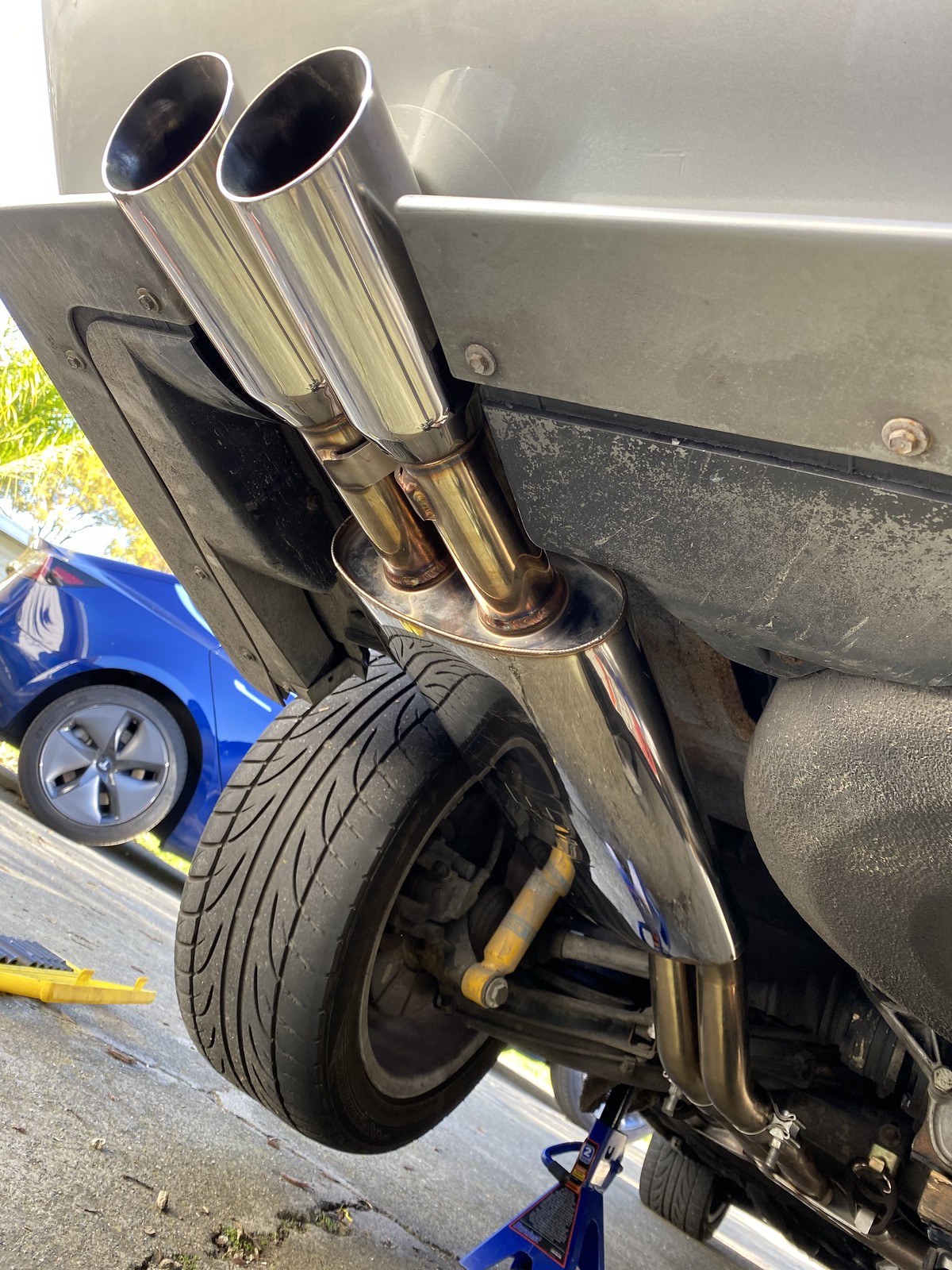 It's a very nice muffler, just the right volume and tone. With that finished, I went to raid the parts stash in my shed. 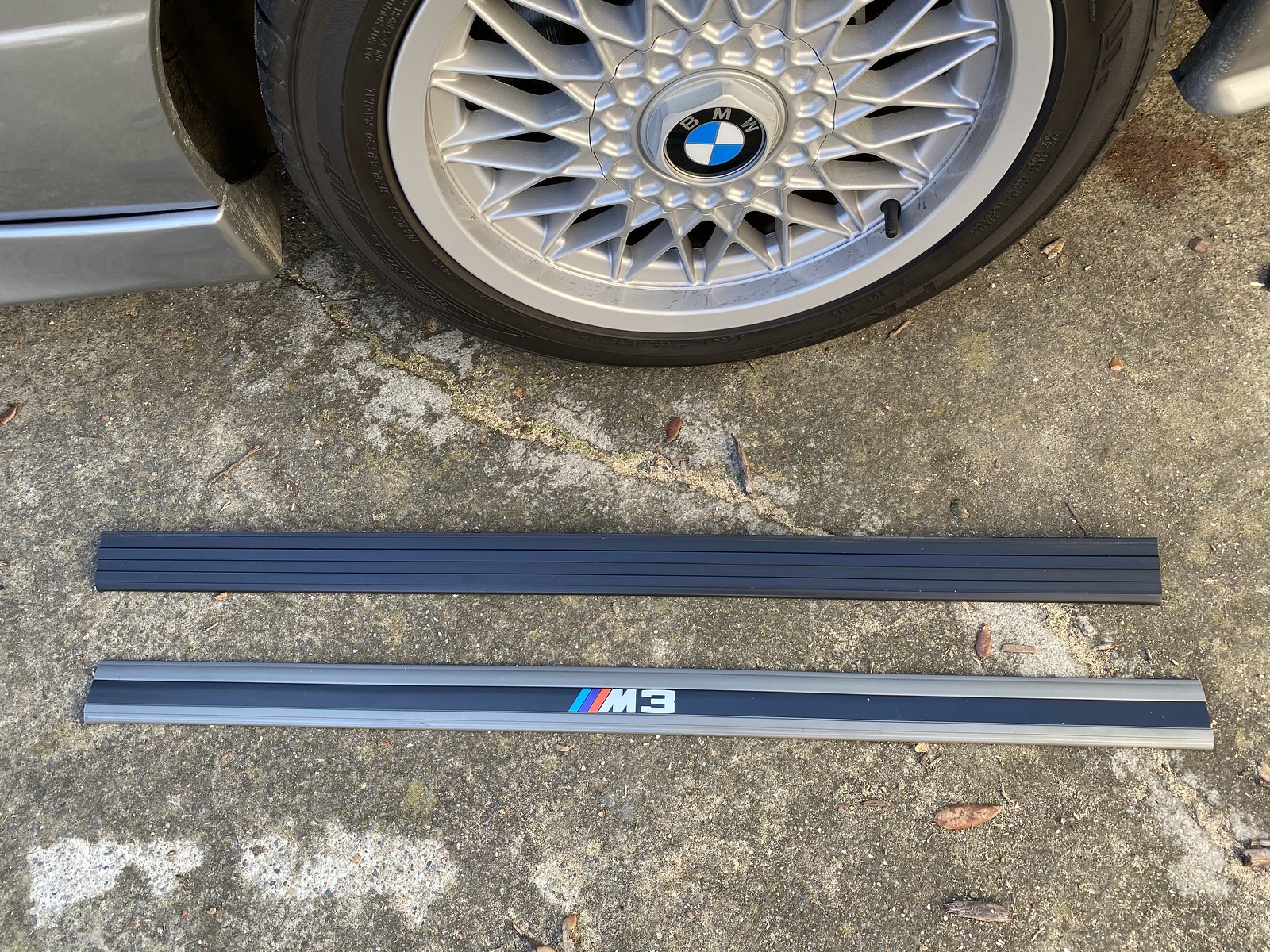 There's some red seat action for ya. With a careful hand and a plastic trim tool, I managed to swap these without breaking any of the plastic clips. 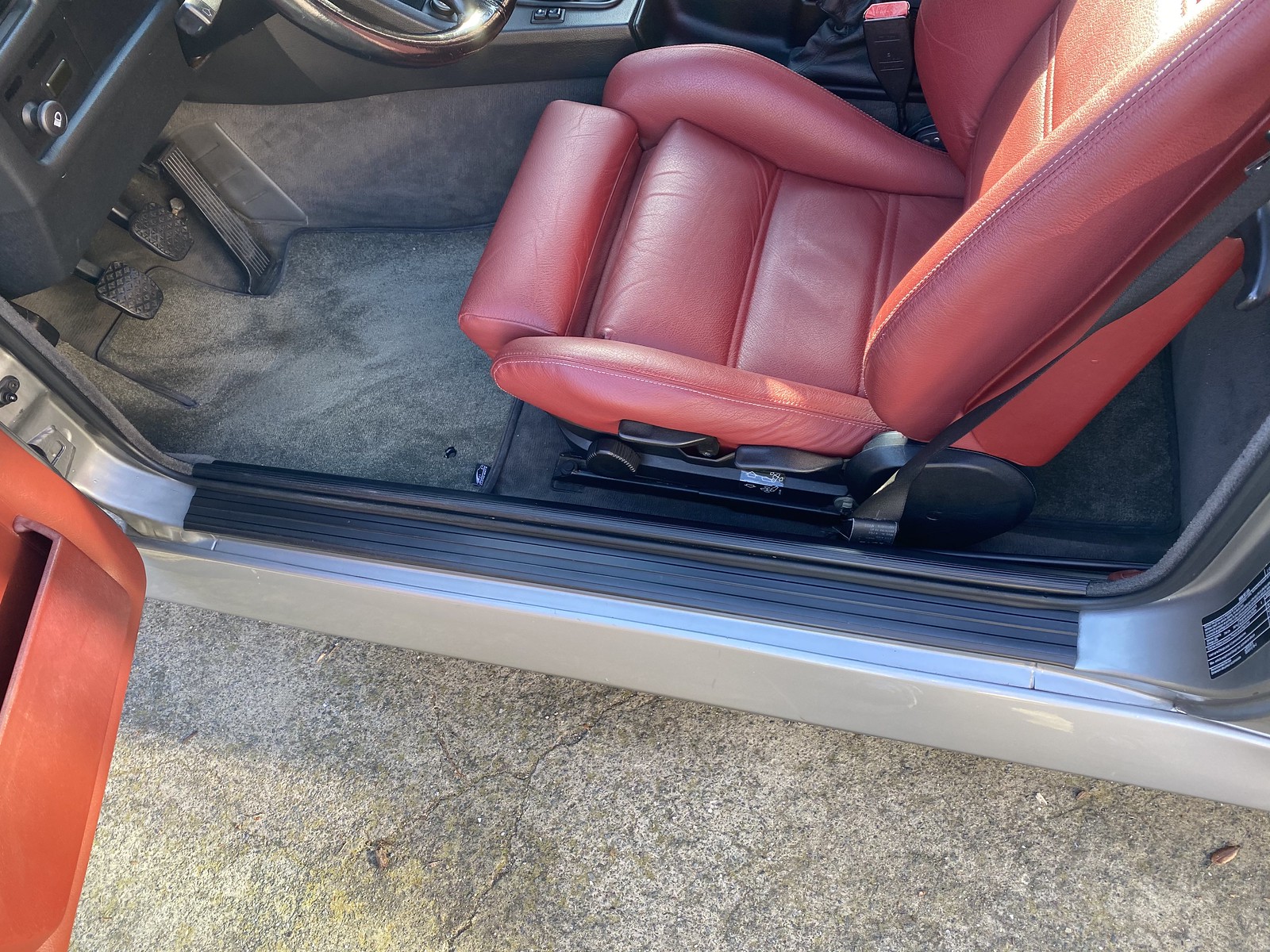 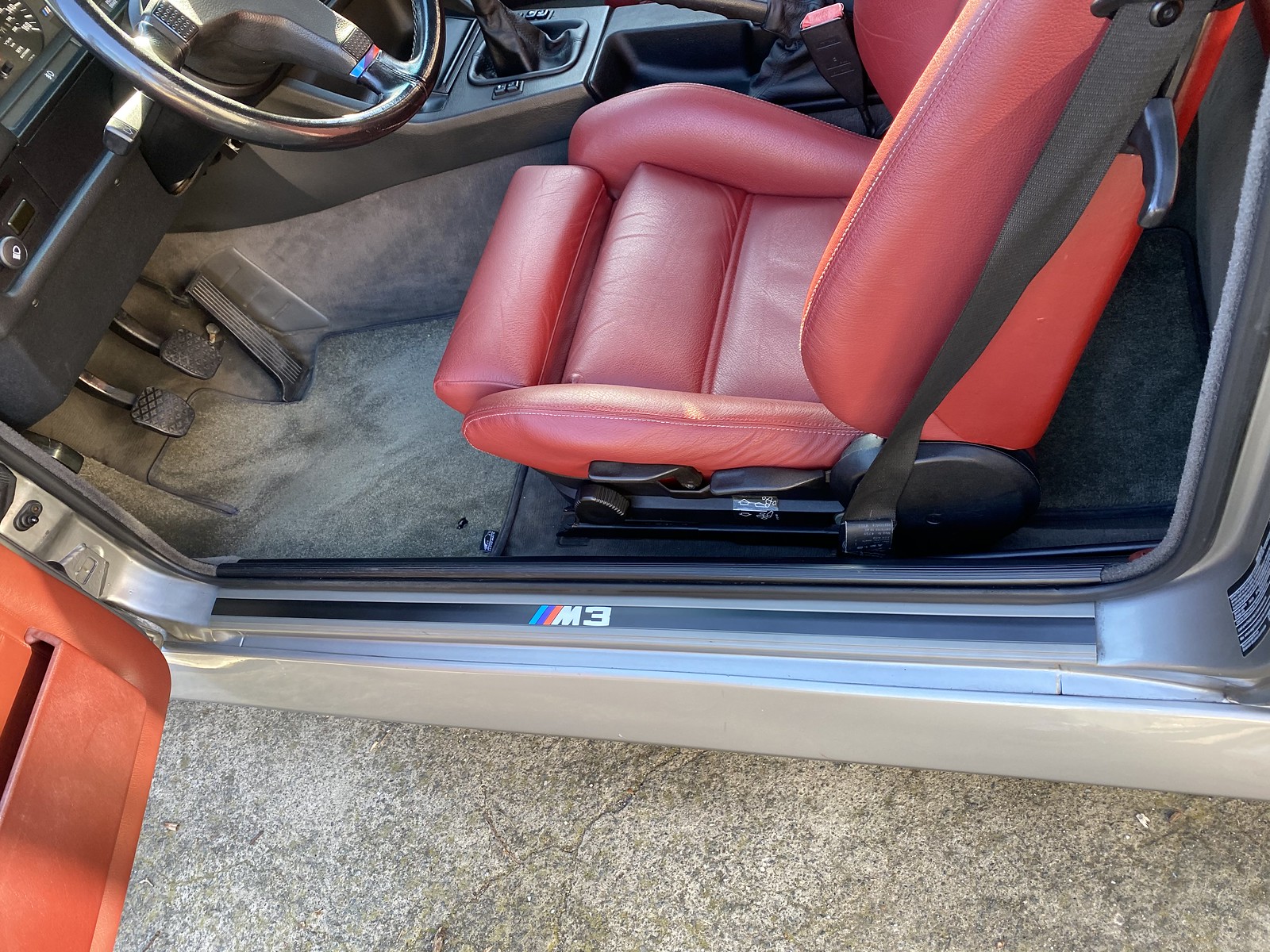 Next up - dead pedal. It might sound silly, since I thought of this as a dress-up item, but the altered foot position is noticeable. 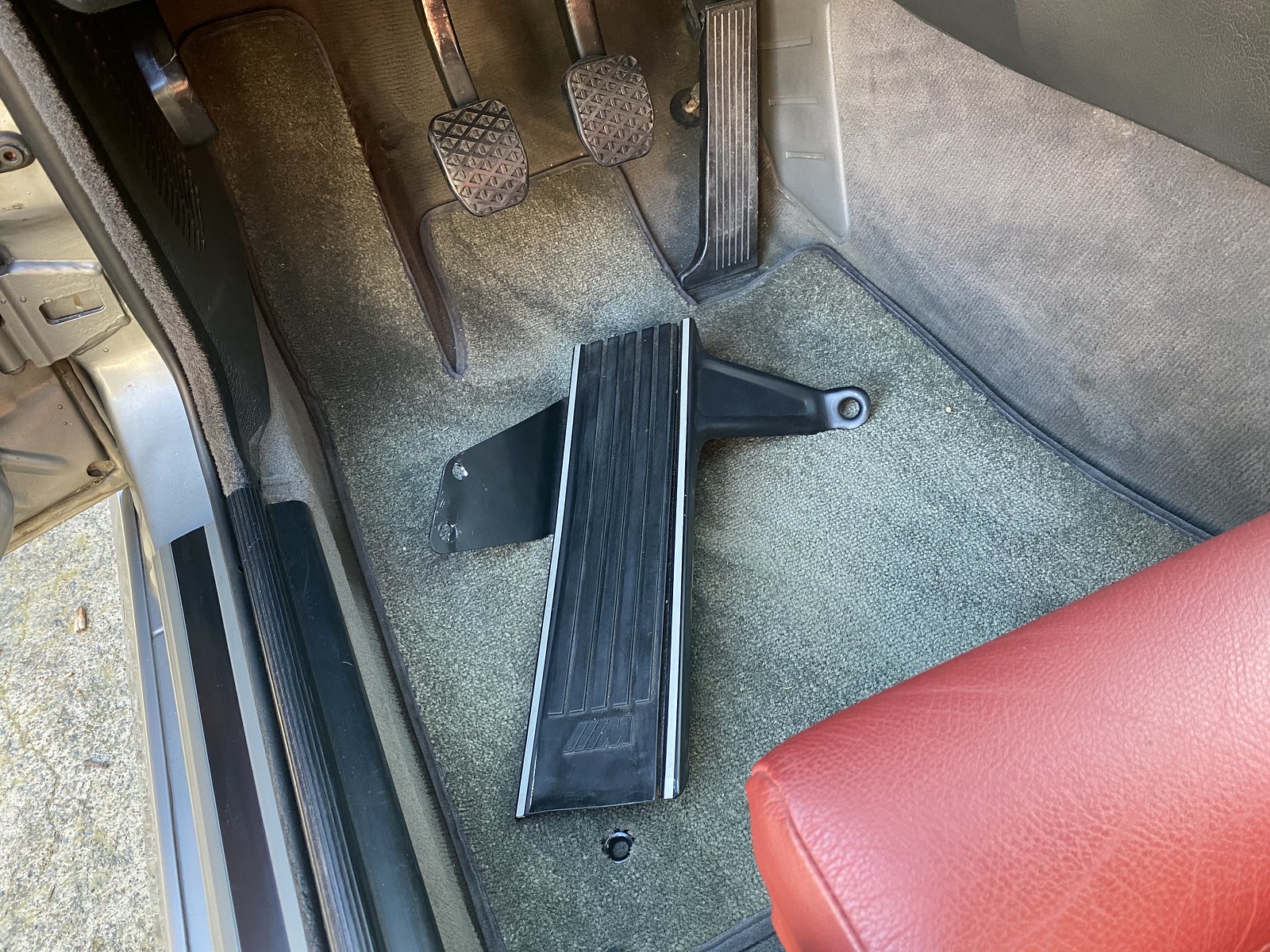 The kick panel requires trimming to the clear the pedal form. There is a guide line molded into the part - I cut right along that line with a Dremel and fitment was spot-on. 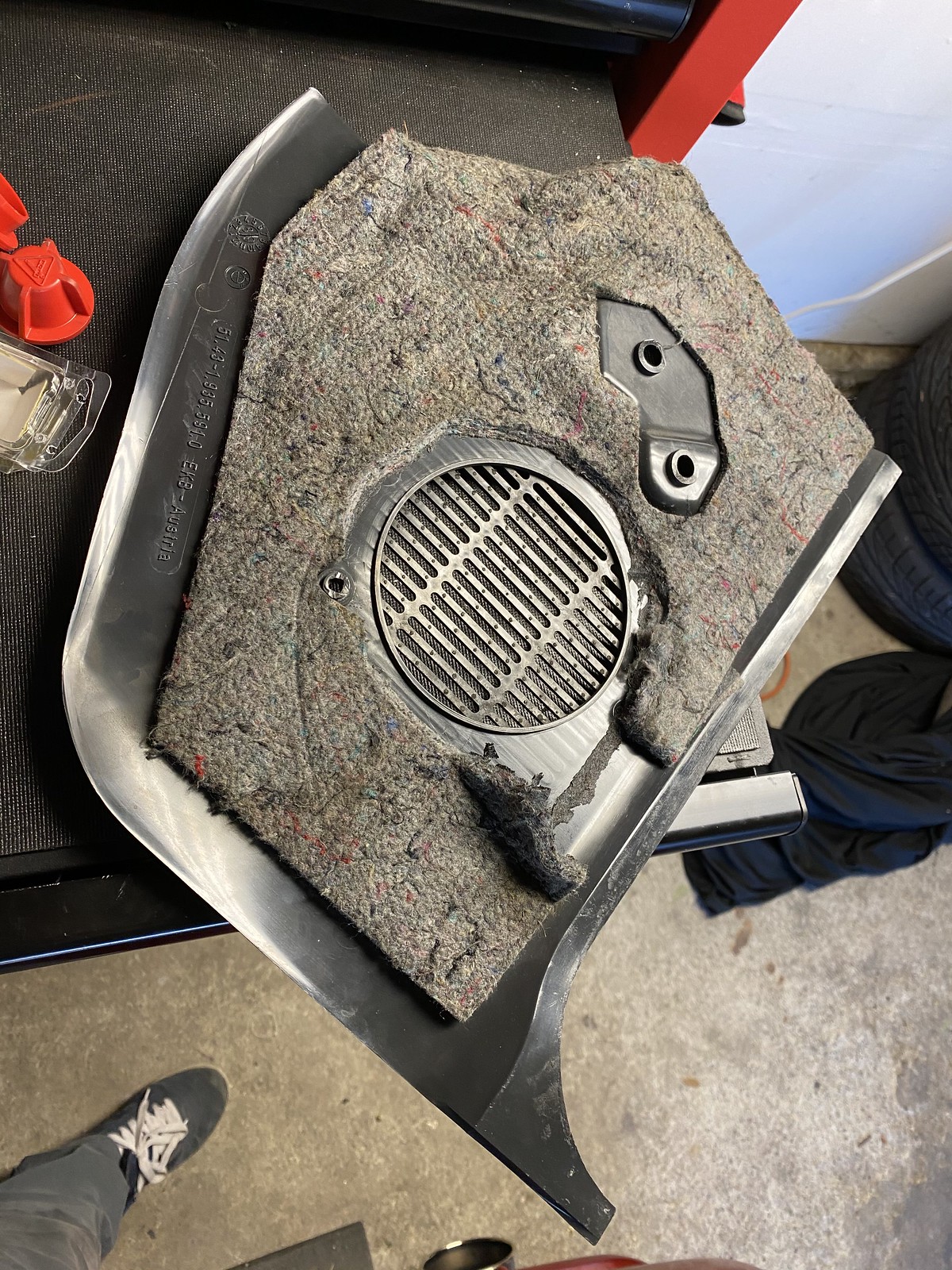 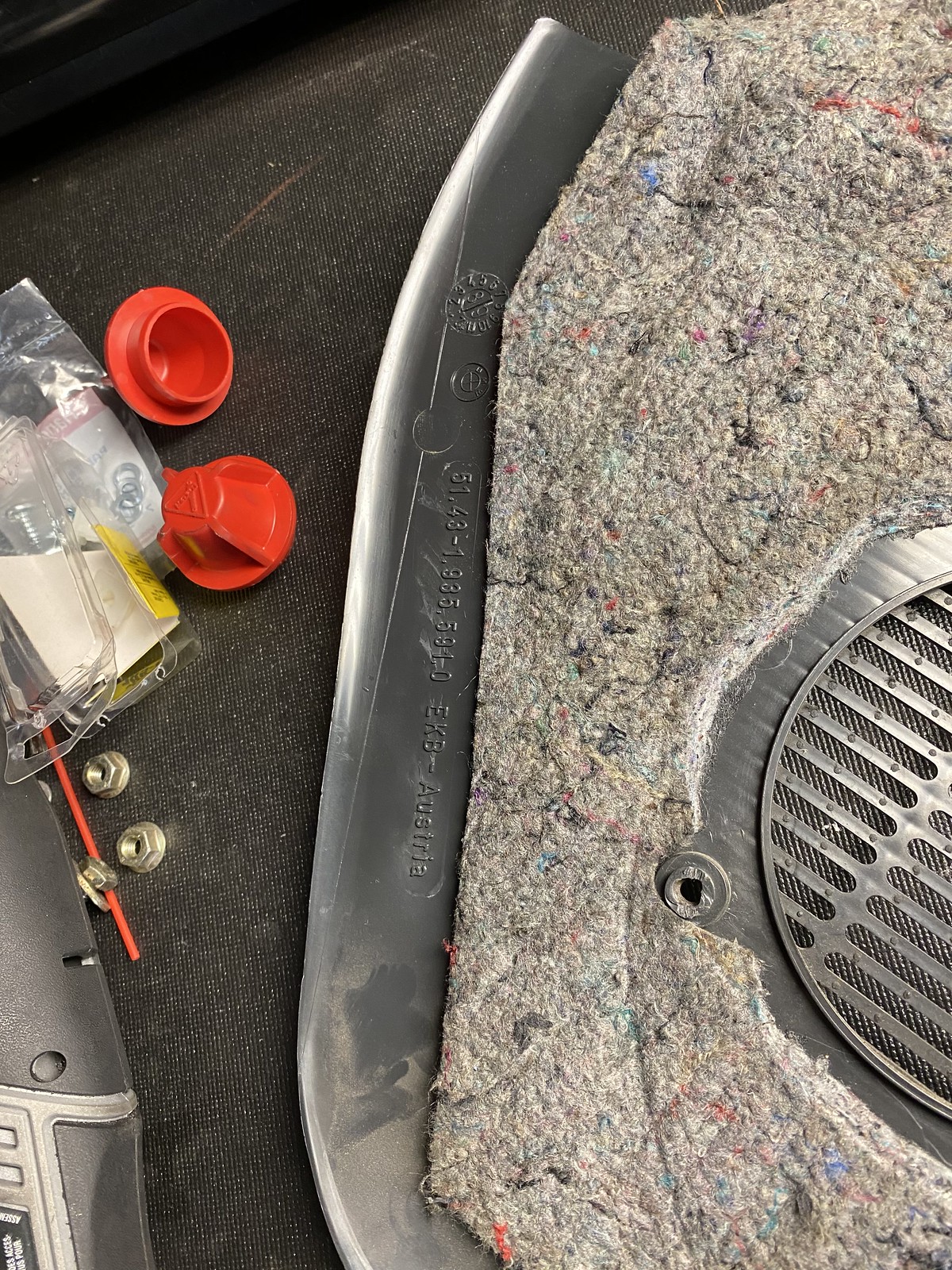 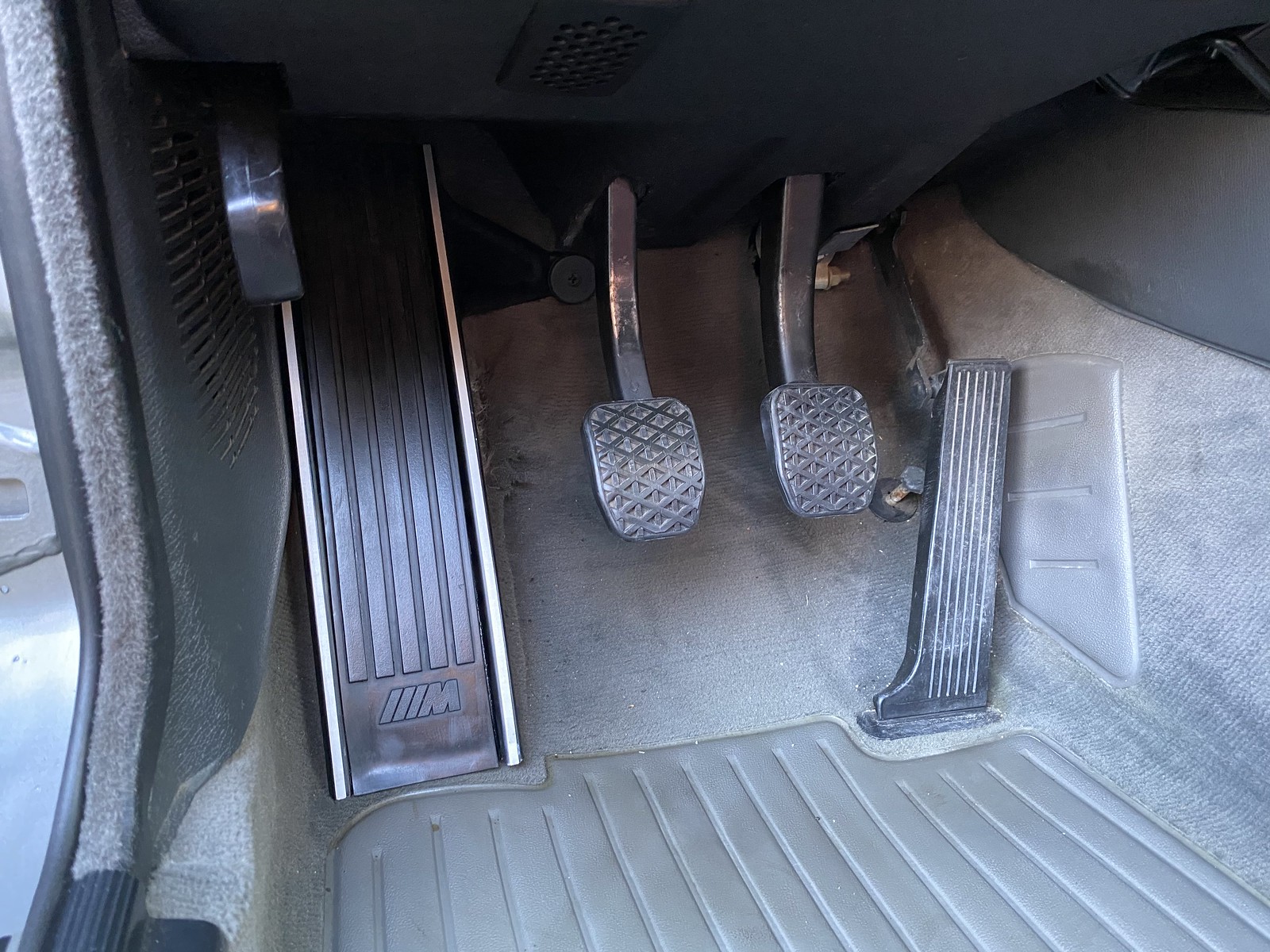 This morning I went on my first real spirited drive with the car. Kevin's got a cracked windshield on his E30 so he brought his 6-speed E90, and we were joined by a coworker with his 6-speed M2 Competition. The car did not miss a beat and we discovered some fantastic new roads around San Jose. My car performs so well dynamically that I have only very minor plans beyond normal upkeep/maintenance... in fact I enjoy the handling so much that I'm scared to spoil it by changing anything at all! My coworker has a lot of seat time in his E30 track car but amazingly had never had a chance to drive an M3. I was happy to swap seats with him and when we stopped he had rave reviews. As for his M2 Comp, wow. I rented the first gen (non-M3 motor) M2 a year or two ago and spent a day with it, and loved it. I remember thinking, "the last thing this needs is more power." BMW had a different opinion and the result is a car that I found, to be honest, intimidating. It could be due to the fact that I just came out of a car that can barely get out of its own way, and tells you so much through its slow steering rack; but I could not deploy the M2's capability in any way on the public road. It was also, you know, not my car. 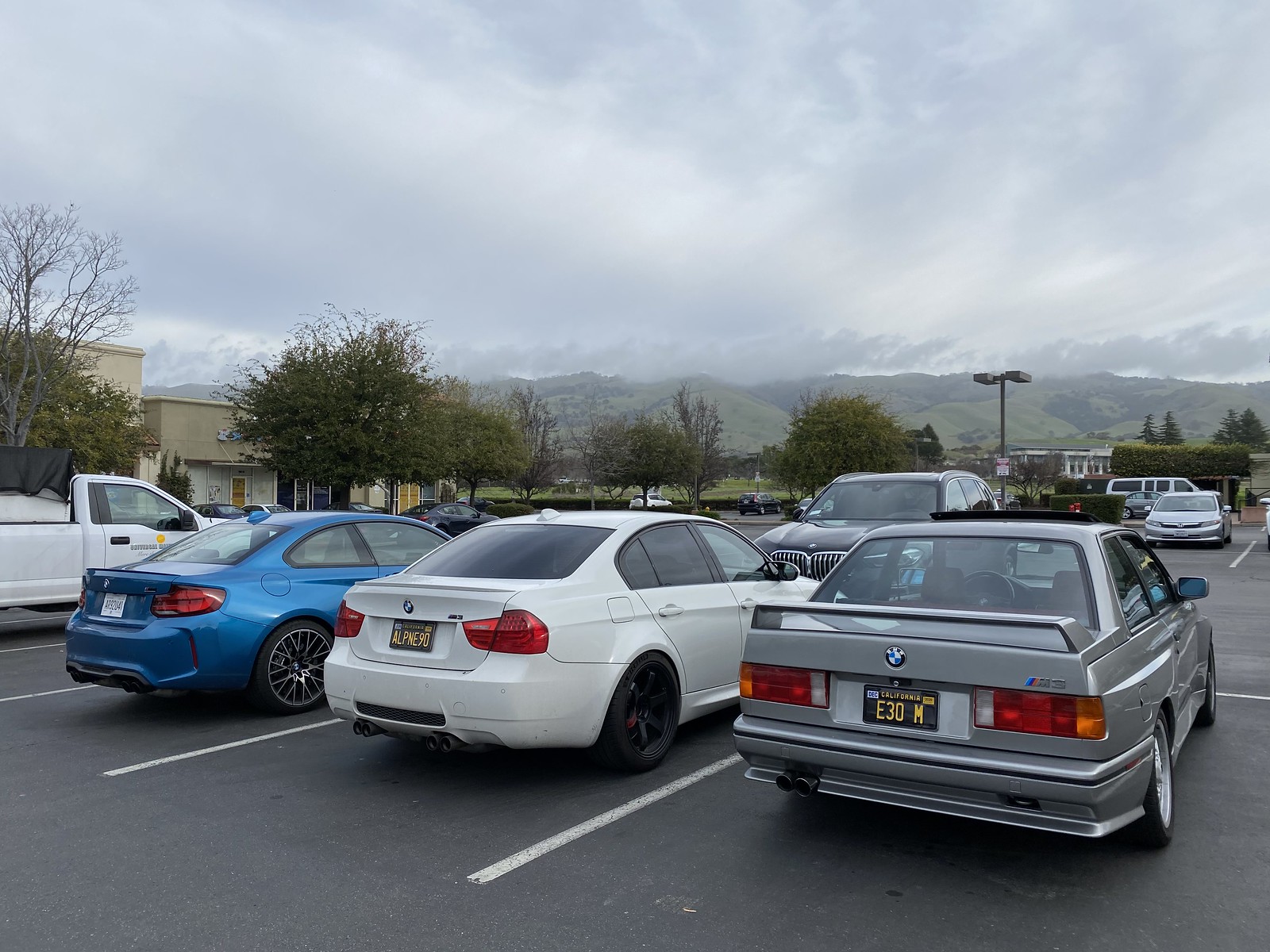 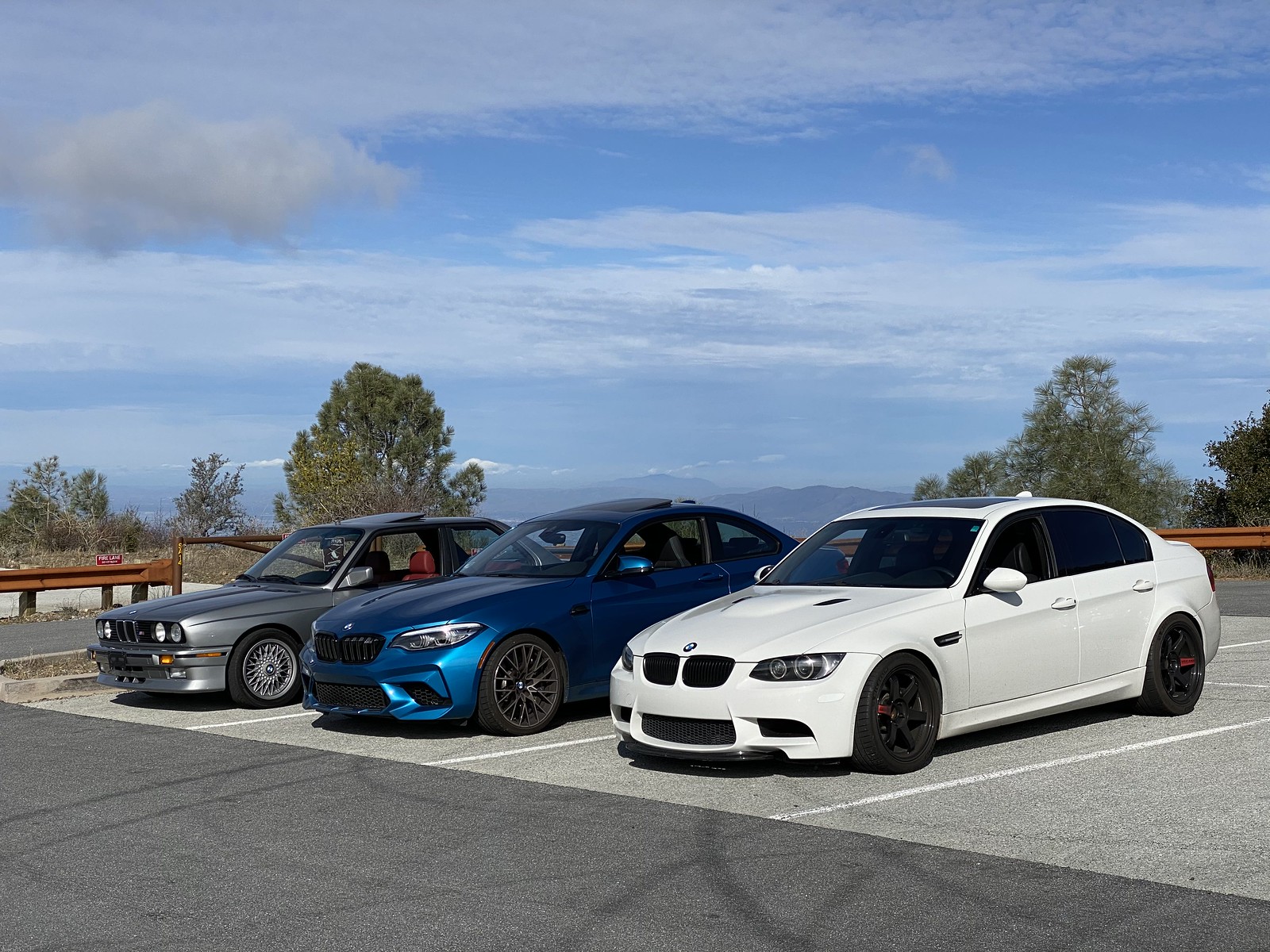 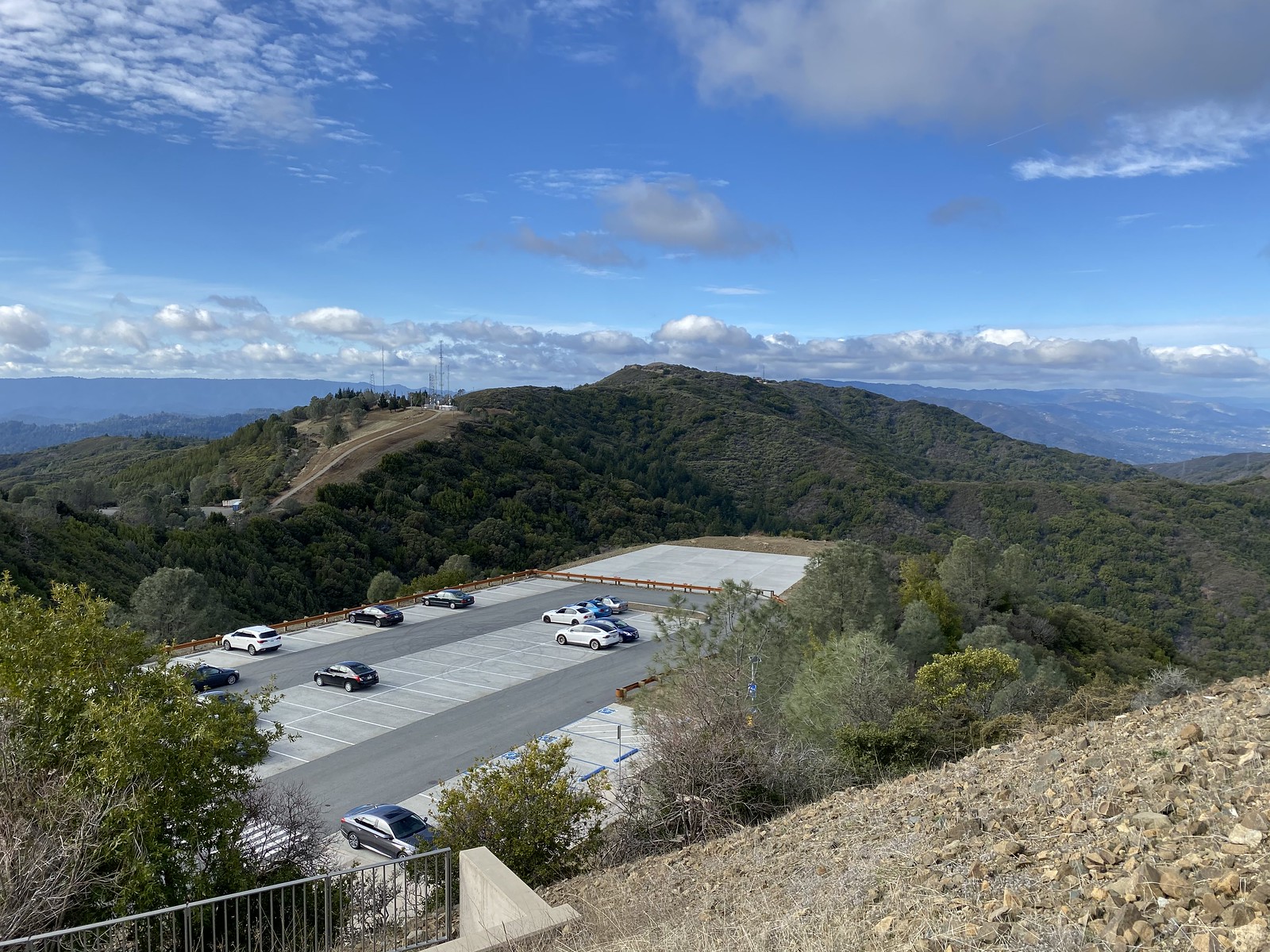 I'm debating whether to post my plans for the car here, early in the thread, or just let the posts be a surprise and show things as they happen. I'm not planning anything spectacular or even particularly creative but, as I said, I do have a shed with some nice parts in it.